We got to Big Bend on 12/7. We have wanted to visit this park for most of our married lives but just never had the time. It exceeded our expectations. The photo above is of Chisos Basin. In the very center of the photo is the campground. We could not camp there because they limit the size of the rig. I believe the elevation is at or in excess of 6,000 feet. It is surrounded by mountains.

We spent a week in Big Bend and would have liked to spend more time but were running out of food and the park did not stock cardboard.

We camped at Rio Grand Village in an area without power or water. Our first real experience dry camping. I learned a few new things about our solar power. One is that in order for it to work properly it is best to not camp in the shade or even partial shade.

The Rio Grande flooded in September due to a tropical storm that passed through. It got a good bit of the campground we stayed in and a lot of it had not re-opened.

We didn’t scratch the surface on hiking the trails and now I wish we could have towed something with four wheel drive since there are all kinds of unimproved roads you can travel in the park.

I should report one narrowly averted tragedy. While in the car one afternoon Gayle started yelling as if in pain. I looked over to find that she had rolled the power window up on one of her fingers. It only took her a minute or so to figure out how to remedy the situation at which time the yelling subsided.

We hiked the Boquillas Canyon trail. Two guys had started ahead of us and were a few hundred yards ahead. We had stopped at an overlook when I heard a man singing. I thought it was one of them at first but finally saw a man standing on a boulder at the edge of the Rio Grande on the Mexico side singing.

We continued along the same path and he began singing as we approached. He is my new friend, “Victor the singing Mexican”. We talked and I learned that he had operated the ferry there for 34 years until 9/11 and then the U.S. shut that down. He has done this ever since. He sells trinkets by leaving them on our side of the river with a price list and a jar for the money. Of course, you should be aware that there is a sign posted at the trailhead which says it is illegal for us to buy the stuff. This is the same stuff they sell at the store.

I did end up getting him a propane tank for his lantern and dropped it off the next day. 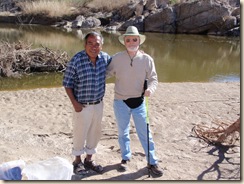 Here is a photo of my new friend. By the way, he has a pretty good voice as well.

At some point when I have a fast internet connection I intend to upload more photos at my Picasa page and will put the link here on this page.