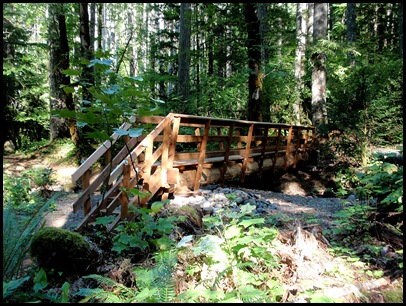 Today we hiked a small portion of the Pacific Crest Trail  from Cascade Locks to Dry Creek Falls. The PCT is a 2650 mile hiking trail from Mexico to Canada, passing through California, Oregon, and Washington.  We have seen quite a few hikers in the town of Cascade Locks since the trail passes through and it is a place to get a shower  and restock. The post office even has a log book for hikers to leave messages to friends or just share their thoughts. We only went 2.3 miles to the falls, but we probably added another half mile by taking a wrong turn and getting lost. One would think a trail like this would be well marked, but a major turn-off had no signs, and of course with a 50-50 chance, we went the wrong way. It was a beautiful trail, though, and the hiking guide said the falls were one of the least visited in the Gorge.  We guessed that is because we aren’t the only ones who take the wrong trail but never realize it and then are too tired to go back and find the falls. 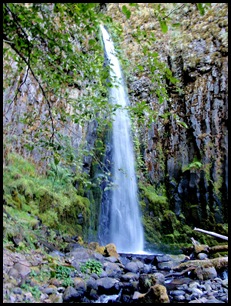 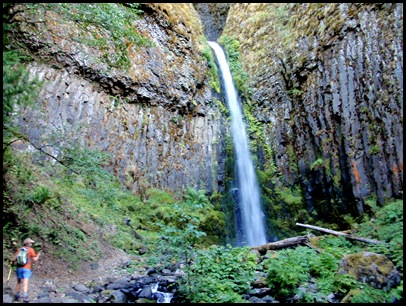 The apparatus in the foreground is the remains of a dam. Apparently Dry Creek used to provide water to the town of Cascade Locks many years ago. 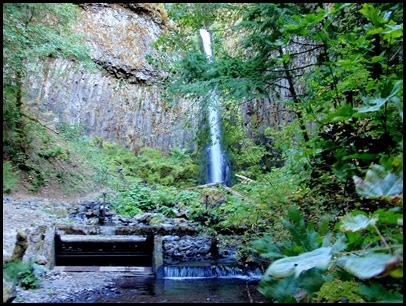 There was a huge pool at the bottom of the falls, and on hot days I’m sure hikers cool off in the  icy water. 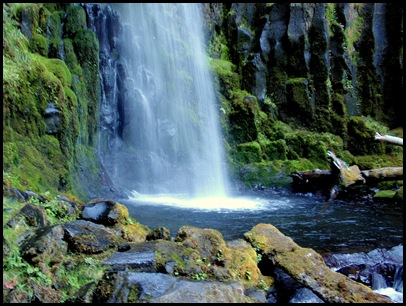 And just a quick update on the water pump. Jim called ShurFlo today to get a tracking number for the new pump he thought they were sending. Turns out the woman he spoke with was not going to ship another until we sent the defective one back, which was not what Jim understood.  And the one she was supposed to ship is on back order anyway, so  the guy he talked with today is sending us a new model with lower flow that is supposed to be more reliable. And the saga continues….