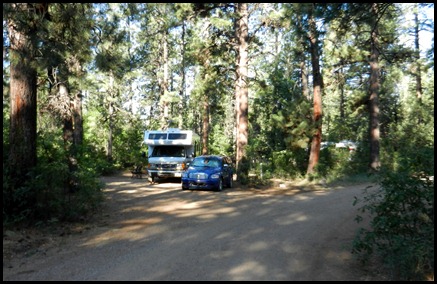 We had planned to stop near Pagosa Springs, CO yesterday but it was 90 when we pulled into Ute Campground, and there are no electric sites. Way too hot to leave the pets and go exploring, although it looked like a nice area.

We decided to go on to Durango and check out Junction Creek, another Forest Service campground just 5 miles north of town in the San Juan National Forest. At an elevation of only 7,300’ we knew we weren’t escaping the heat (the bank we passed in Durango showed 95), but we also knew there were some sites with electric, and we hoped on a Sunday afternoon we could get one. Lucky for us we got a huge double site with power that was available for 3 nights. With the senior pass we are paying $26/night for this double site, but since we’re splitting it with Debbie that’s not too bad.

If we decide we want to stay longer, there are only 2 non-reservable electric sites that are supposed to come open the day we have to be out of here. Although it looks like the highs will remain around 90 for the next 10 days, we may just stay here until after the 4th. There is lots to explore around this area and we wanted to be near Home Depot, Wal-Mart, a pet store, laundromat, microbreweries, etc.

It was a really scenic drive from El Vado Lake to Durango, and not long after we entered Colorado Debbie called on the radio to tell us she just saw a bear. We thought she was mistaking it for a big black dog or something, but wouldn’t you know about 20 minutes later, while I was up trying to track down a rattling noise that was driving Jim crazy, he started yelling at me to get the camera and come back to my seat because there was a bear in the road in front of us.

I did get to see it waddle off into the woods, but couldn’t get a picture. It’s amazing all the miles we’ve hiked in bear country and have never seen a bear, to see one crossing a highway in the middle of a hot afternoon. We’re hoping that’s a good omen that we may actually see some wildlife in Colorado.

Maybe even in these woods behind our site… 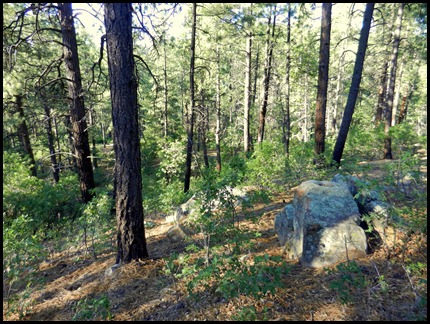