Hiking On Lesser Known Trails Near Yosemite and Fire Update 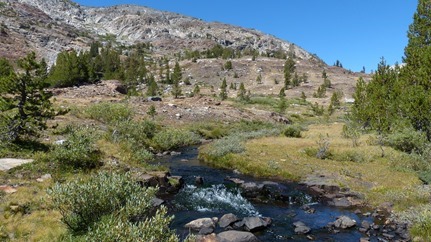 We received a few emails yesterday from friends wondering if the wild fire near Yosemite was a threat to us. Thanks for your concern. We are about 50-60 miles east of the Rim Fire, on the other side of the Sierra Nevada. No fire danger here from that one, and the fire near Bodie just to our north has been contained.

This is not what you want to see outside your window at night, but at least we had Mono Lake between us and last weeks fire. 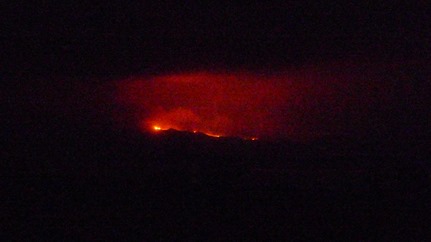 The wind shifted and came out of the west late yesterday afternoon, which did bring us some haze and smoke from the Yosemite fire. We thought about moving farther south this morning, but the weather report said our wind should become southerly this afternoon, which it did, and it has now cleared up nicely. There is something to be said for living in a house on wheels that can be moved on short notice, so if the smoke becomes worse we will move on until we get away from it.

We found a couple of nice hikes just outside the eastern Yosemite entrance. Along Saddlebag Road is the 10,000 ft Inyo NF Sawmill Walk-In campground. Almost made us want to tent camp again, it is in such a beautiful location and the sites are so widely separated. If you walk through the campground there is a trail that leads to the Hall Research Natural Area, less than a mile past the last site. 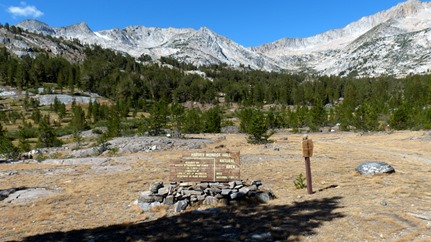 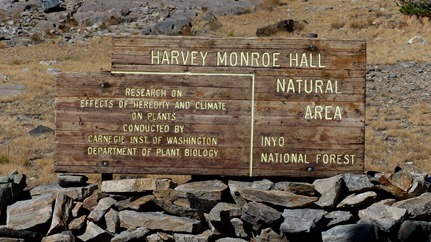 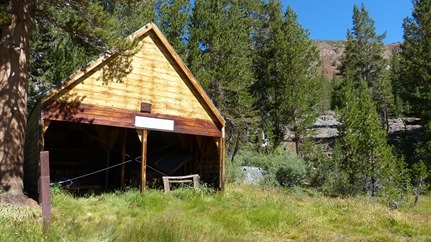 In another half mile there was supposed to be a fork in Slate Creek, which we had been following. There we were to take the left fork, ford the creek, and come to Green Treble Lake in another half mile. We somehow missed the fork and the turn, and had walked another mile before we decided to turn back. We never could find the turn, so we just crossed the creek and took off across the rocks to see if we could locate the lake. We could see it on the map, but there was a big mountain between us and the lake, so we just gave up looking. Nice hike, anyway. 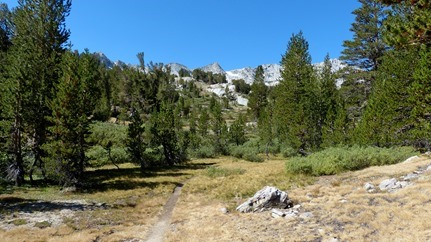 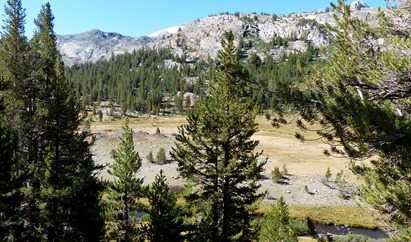 We think the lake was on the other side of the mountain, but the book said this was a hike with little elevation change. 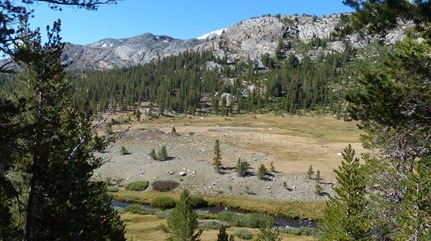 Yesterday we went back to Saddlebag Rd, to the Junction Creek Campground and the start of the one mile trail to Bennettville, a former failed silver mine. 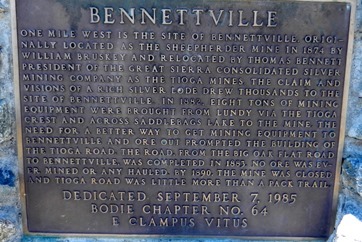 The trail follows Mine Creek, with lots of small cascades along the way. 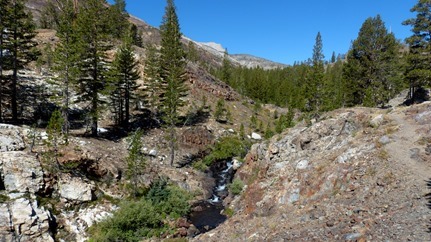 It’s a bit of a climb up to the mine, and we did our usual huffing and puffing. The creek gave us lots of good reasons to stop and catch our breath. 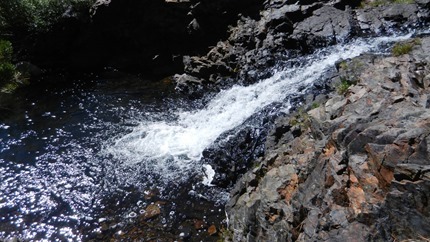 All that’s left of Bennettville are these two restored buildings and some rusty equipment. 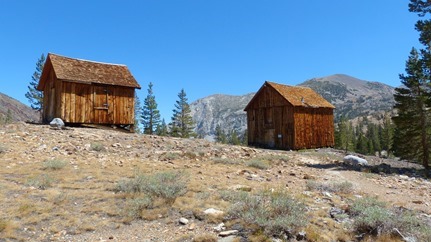 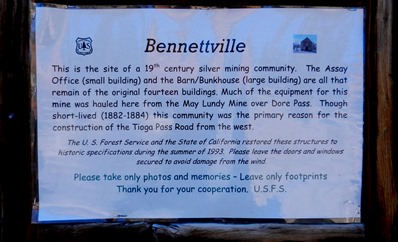 Although it is not named and not on our map, the trail past the mine continues on. Our plan was to hike another mile or so to Shell Lake and Fantail Lake. We had no idea this would turn out to be such a great hike! The scenery was every bit as good as the 20 Lakes Basin Hike we did a couple weeks ago, and it didn’t cost us a boat ride to get there. 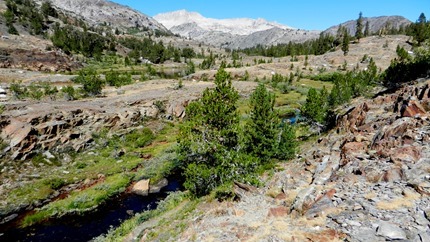 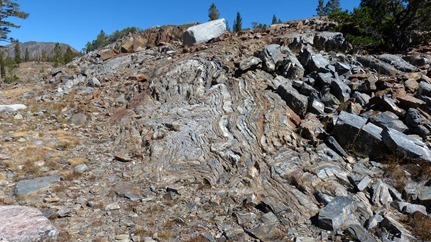 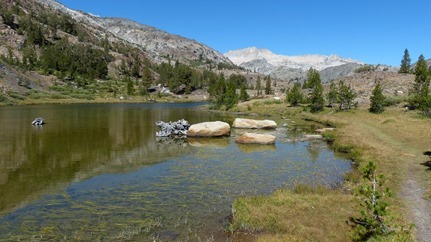 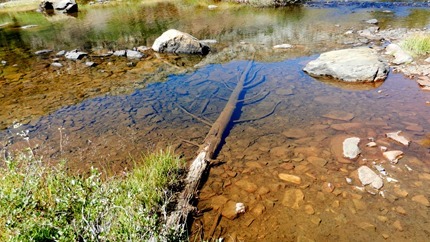 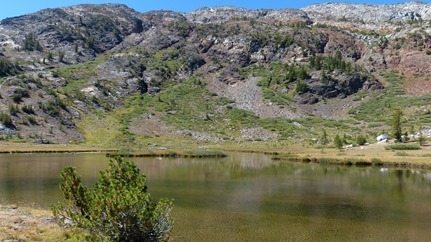 A photo of Jim taking the next shot of ripples in the water. 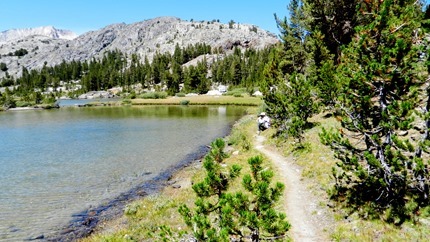 We decided to walk around the lake and look for a good spot to sit and eat. There really wasn’t a bad spot. 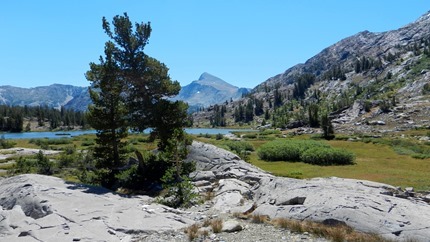 Jim decided to wander off and see if the trail continued. He called for me to come, so I left the binoculars with Debbie and said we’d be back shortly. The trail got rough and went up and up, but we were energized from our energy bars so we kept on. 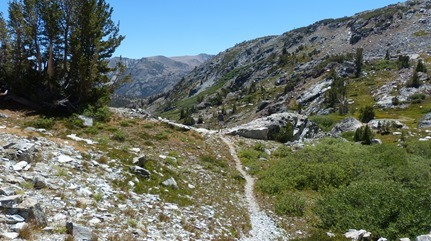 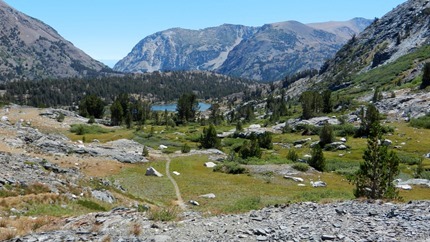 Jim kept saying let’s go a little farther and see what’s past the next climb. 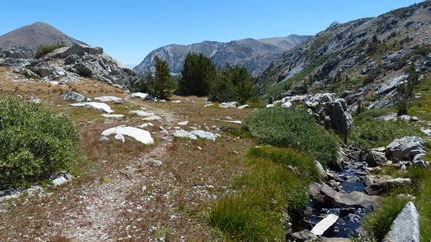 I had forgotten there was one more lake, so it was quite a surprise when this appeared. 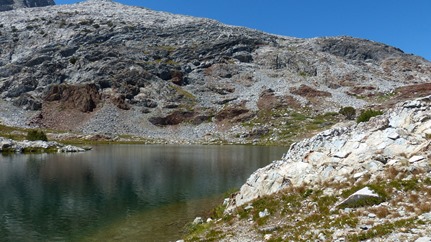 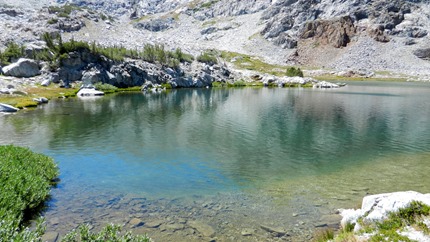 Yes, a faint trail continued on, but we knew we had almost 3 miles to go back and Debbie was waiting. Jim looked at the map and we weren’t too far from Green Treble Lake, the one we never found a few days ago.

Our views of Mt. Dana on the way back. 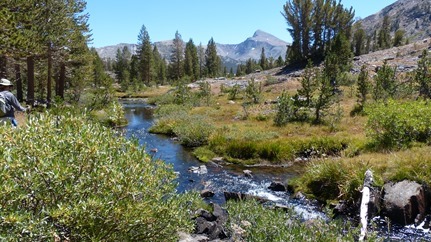 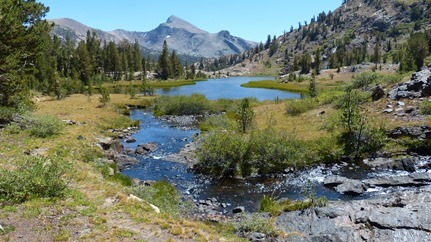 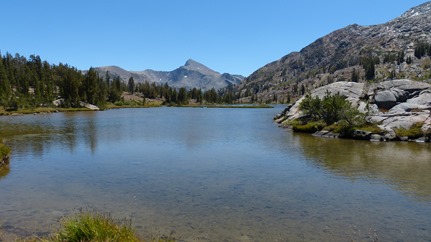 We didn’t see anyone on the trail until we were heading back, then we ran into several groups of people with dogs. I think we’ve bumped this up to our favorite trail in the area so far.