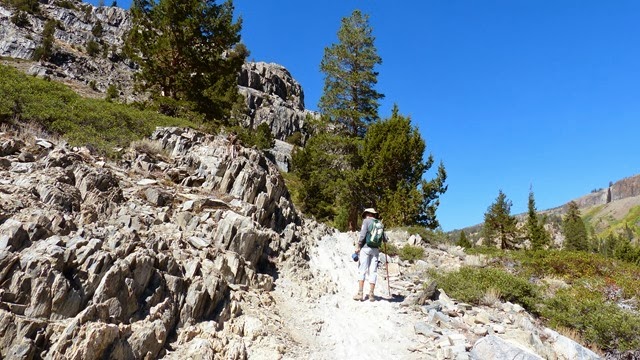 We wanted to do one last hike near Mammoth Lakes and decided on the Shadow Lake trail. The trailhead is off Minaret Rd at Agnew Meadows, a few miles past the Forest Service entrance station. This is the same fee booth we went through to get to Devils Postpile. $10 per vehicle or free with the National Parks pass. During the season you have to take the mandatory shuttle to the trailhead from the Mammoth Ski Area, but it stops running after Labor Day.

The parking lot was nearly full, but we didn’t realize the Shadow Lake trail was actually part of the Pacific Crest Trail. We saw quite a few backpackers going both directions along the trail.

The trail begins at 8,300 feet, with the grasses of Agnew Meadows dry and brown at this time of year. For over two miles the trail is mostly level or gradually descending into the San Joaquin River Valley. 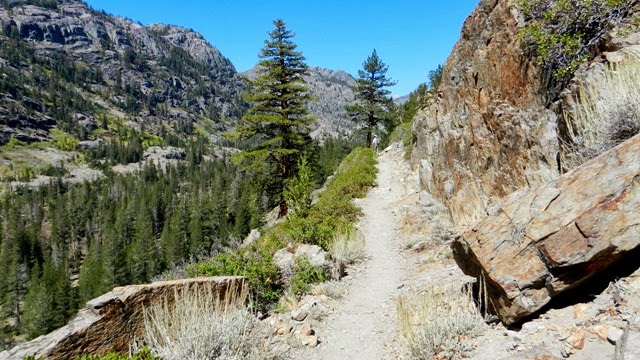 We passed by Olaine Lake. 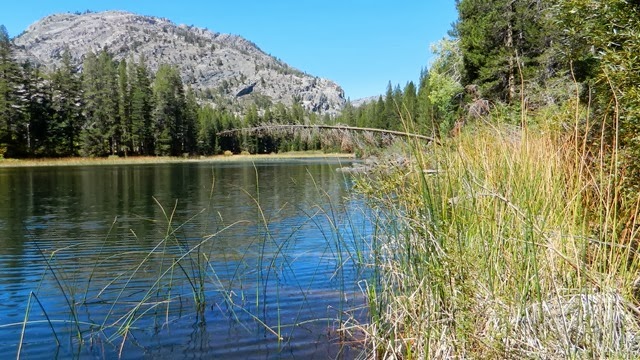 Then crossed the river over a nice bridge. 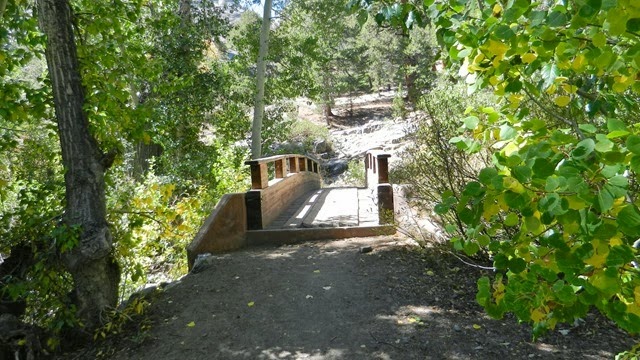 After the bridge the trail begins a fairly steep uphill climb, with switchbacks and rock steps. 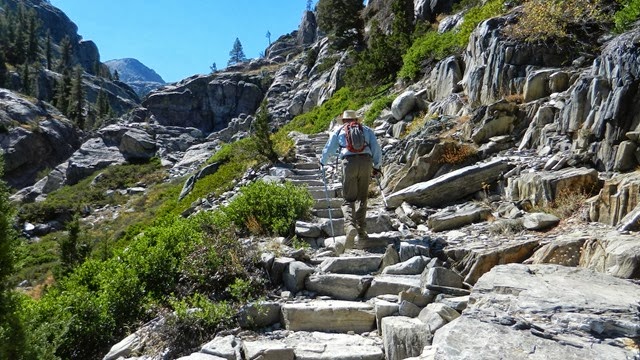 But nice views of Mammoth Mountain. 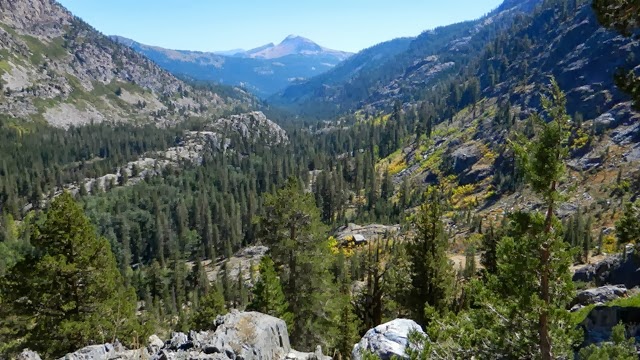 After over 700 feet of climbing in about a mile, we knew the lake had to be close when we spotted this waterfall. 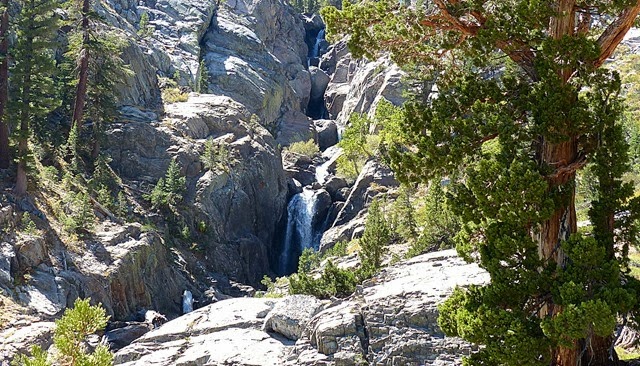 First glimpse of Shadow Lake. The photos don’t convey how beautiful this looked. 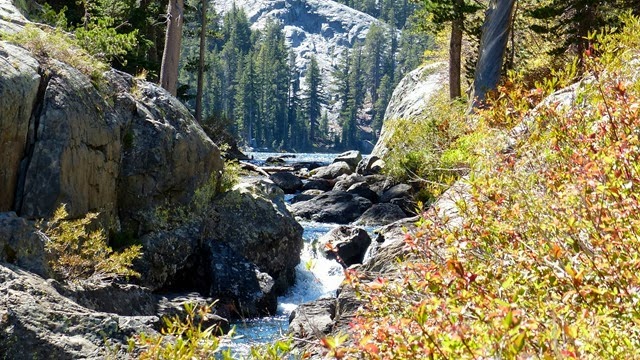 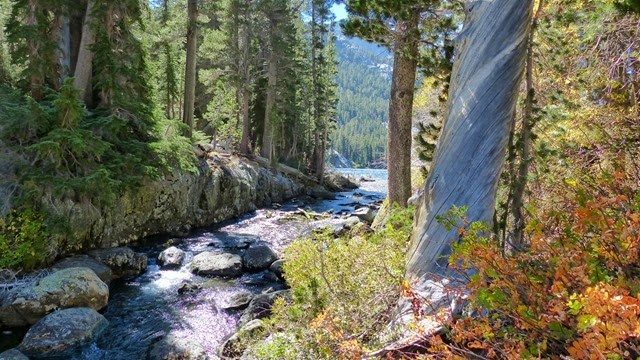 We stopped for lunch behind the shelter of large rocks. Although it was sunny, it was extremely cool and windy by the lake. 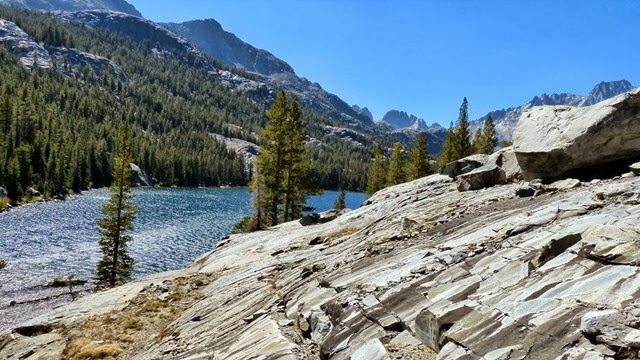 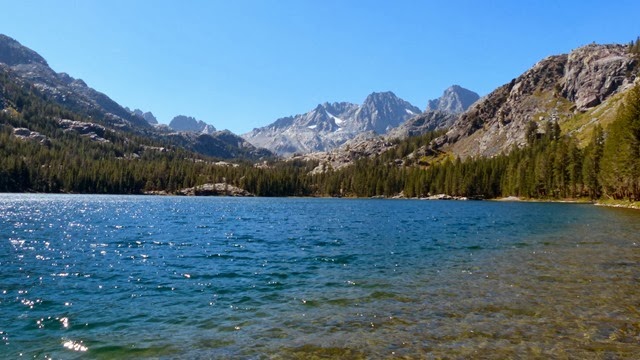 This was a good choice for our last Mammoth Lakes hike. 7.4 miles and moderately strenuous. The trail continues on another 3.5 miles to Ediza Lake, where most of the backpackers were heading.

And we got to see bear scat, so we know they’re out there. In fact we saw the same thing less than a mile from our site near Hot Creek just a few days ago. 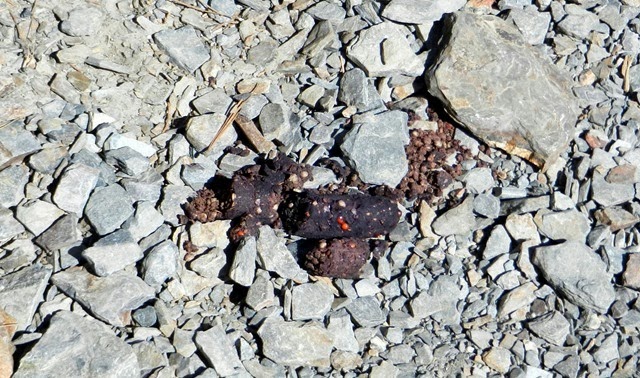 Yesterday we had strong winds, with a slight chance of rain in the forecast. We ended up having light rain most of the afternoon and evening, and awoke this morning to 33 degrees and snow on the Sierra.

Actually it’s been in the 30s the past five nights, a little out of our comfort zone for camping without electric. So today we are moving south closer to Bishop at lower elevations and hopefully warmer temperatures.