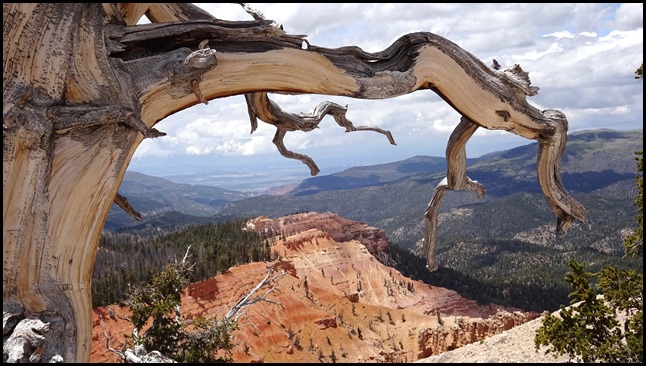 After leaving Great Basin National Park we quickly entered Utah and drove southeast on State Route 21, which seemed to us even more lonely than Hwy 50 across Nevada. There is a 75 mile stretch with no services, only an occasional ranch, and very little traffic. We did see a couple of cyclists along the way. It was a beautiful drive, crossing several summits.

We were on our way to Cedar City, where Jim had an appointment with a dermatologist, and our mail was being sent to the post office. Although we’ve been to southern Utah several times we haven’t been to Cedar City, and since we’ve been on a national park binge I wanted to visit nearby Cedar Breaks and the Kolob Canyon section of Zion.

I planned for us to stay at a Passport America RV park in Kanarraville, about 12 miles south of Cedar City, and decided to call ahead just to be sure we could get a site. To my surprise there was nothing available since they had a scout troop coming in, so I researched, made other calls and found an RV park run by the Indian Peaks Band of Paiutes a few miles closer to Cedar City and about a half mile from I-80.

Indian Peaks RV Park is a bit quirky but the managers are very nice and the showers are excellent. Full hookups for $25/night but the sewer is too far for us to reach without moving the rig, which isn’t a problem for us, and all the sites are very sloped. There are only a few other rigs here so it’s been quiet except for some road noise. 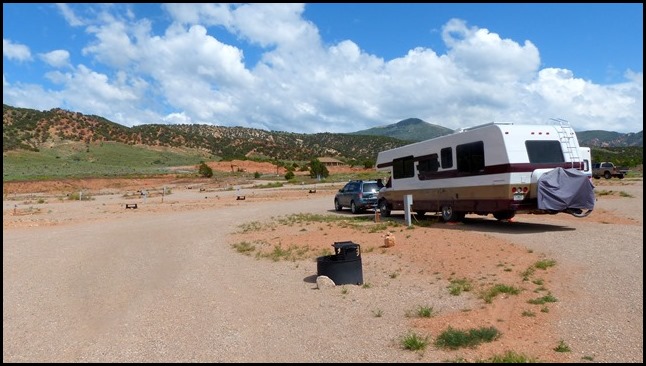 Unfortunately the weather has been a bit unstable since we arrived, with frequent thunderstorms popping up, so we haven’t yet been able to hike in some of the canyons we were hoping to. After Jim’s appointment on Friday, where he had several lesions frozen off (the curse of the fair-skinned), we did a little shopping and had lunch at Centro Woodfired Pizzeria. The pizza was excellent, and although the beer selection was not very extensive we shared a bottle of Wasatch Devastator Double Bock, pretty darned good for Utah beer.

Yesterday more thunderstorms were in the forecast but we decided to chance it and drive up to Cedar Breaks National Monument, 23 miles from downtown Cedar City. The temperature dropped to 45 degrees by the time we reached the park at over 10,000’ with snow/sleet falling as we got out of the car at the visitor center and trailhead parking lot.

Cedar Breaks National Monument consists of a 3 mile, over 2,000’ deep amphitheater eroded into the west side of the Markagunt Plateau, similar to Bryce Canyon National Park, although much smaller and much less visited. 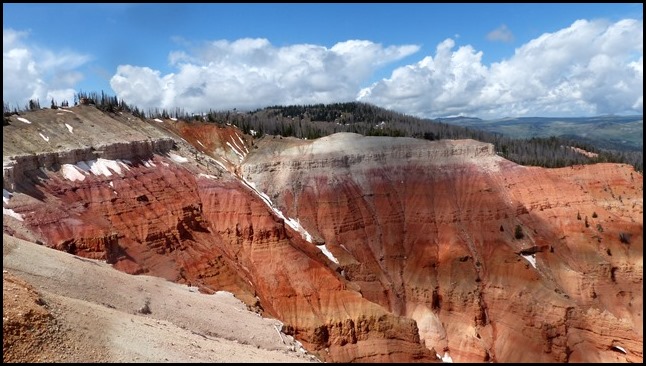 There are only a few trails within the national monument, so we decided to take the four mile round trip trail along the rim to the Spectra Point and Ramparts overlooks, hoping any thunderstorms stayed away. Although a smaller area, the scenery here is no less dramatic than Bryce. 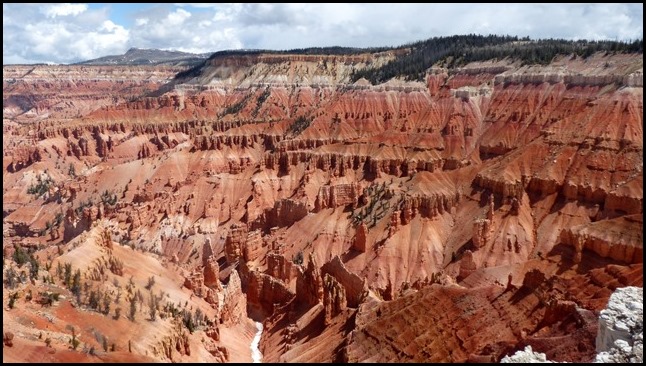 We didn’t get very far before we encountered mud and snow that made walking a little tricky in places. It wasn’t long before Jim went down on his butt, getting mud on the camera, but at least not dunking it in a deep puddle this time. 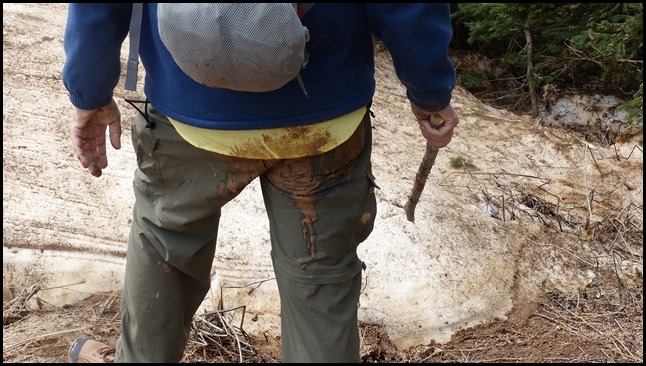 We thought about turning back but saw some people coming up who said this was the last bad section, and from there on the trail was dry, so we gave it a try and made it through without any more mishaps. 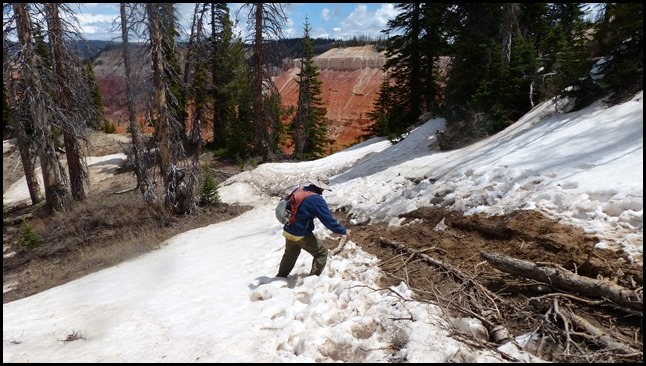 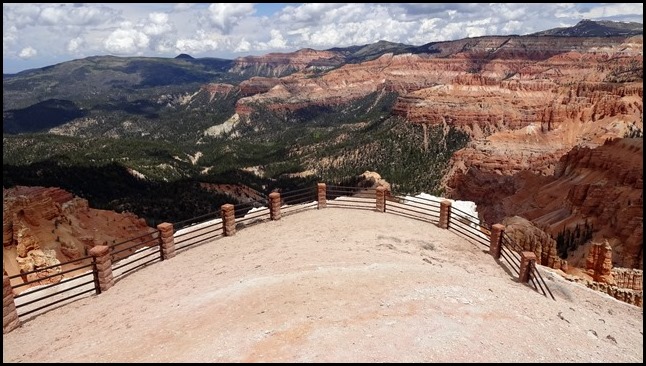 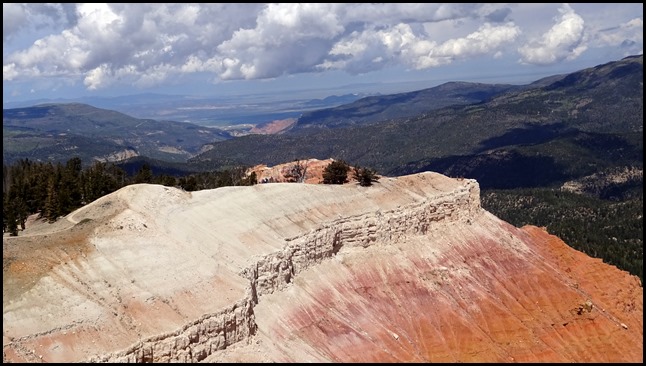 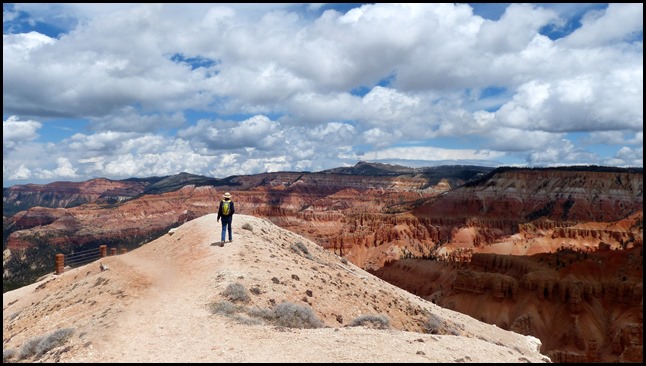 Since we couldn’t get to the Bristlecone pines in Great Basin it was nice to see them here, although the oldest is only estimated to be around 1,600 years. 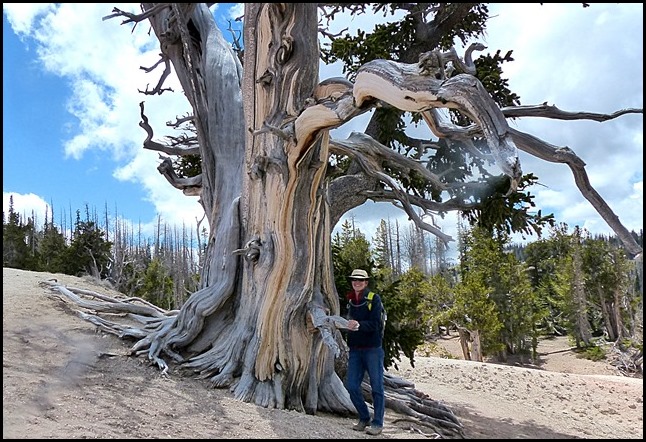 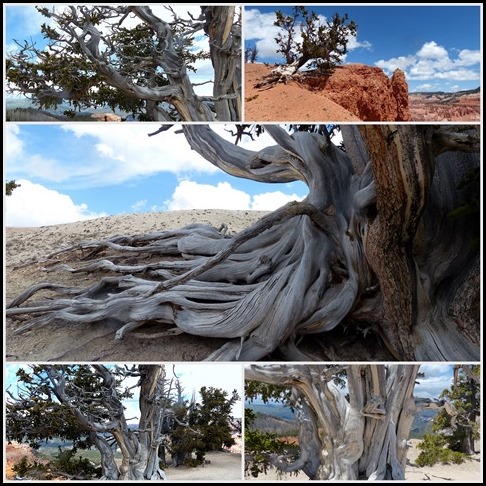 After Spectra Point the trail descends on switchbacks to the Rampart overlook where we were much closer to the formations. 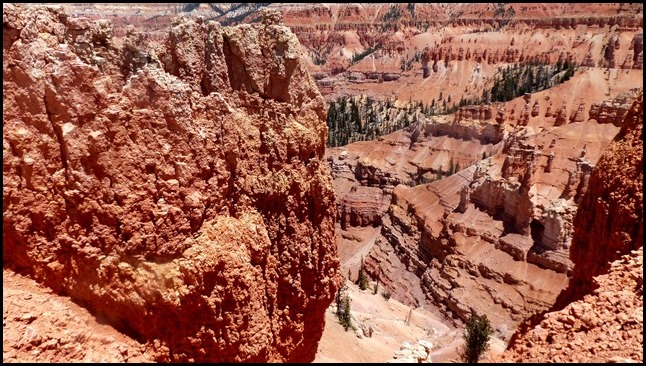 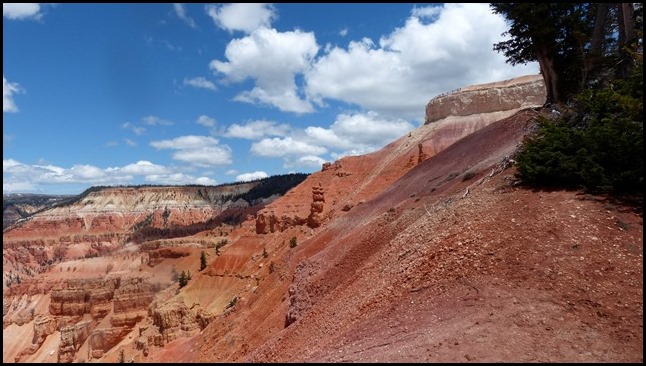 The weather cooperated for our hike but just as we got back to the car it started snowing again. We drove through the campground to check it out but saw only one site we would fit into. We did see a couple of smaller RVs and a group of tent campers. Too cold for us to stay up there, anyway, but a great place for a day trip. 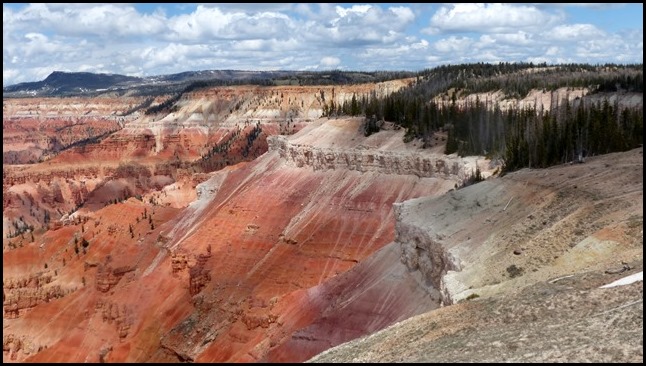 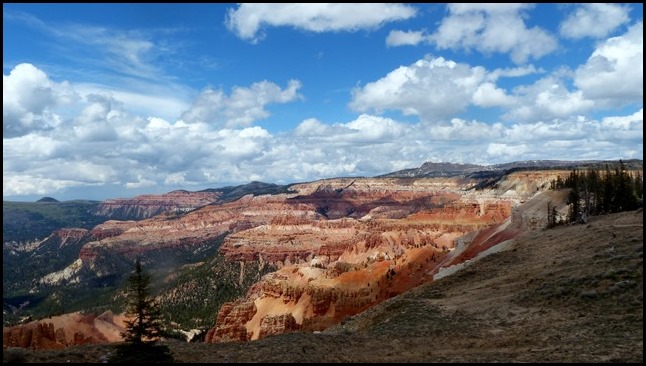