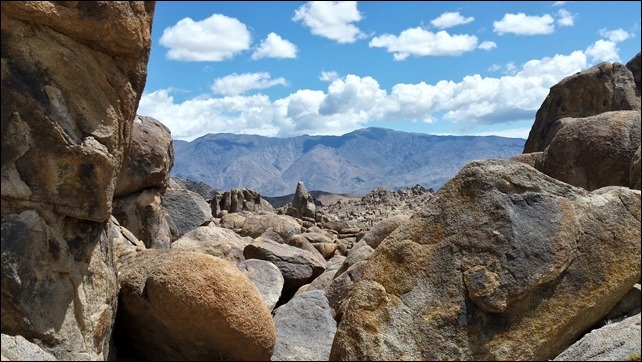 We are now parked among the fabulous rock formations of the Alabama Hills near Lone Pine, CA. Our Lazy Daze friend Jeanne joined us, and as we were attempting to get level, blog readers and new friends Andre and Rose (The Road In Between) came by looking for a site. Hard to see the three RVs in this photo. 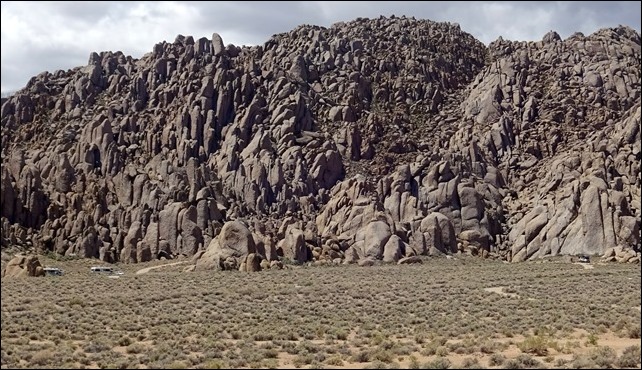 On our previous visit to the Alabama Hills in October 2013 the Lone Pine Film Festival was taking place so it was much busier. This week we’ve only seen a few climbers and a couple other RVs scattered around. It’s a huge area so there’s plenty of room for everyone but cell reception can be spotty, which is why we are in the same location as last time since we have a pretty solid 3G Verizon signal with the amplifier and Jeanne is getting good AT&T. 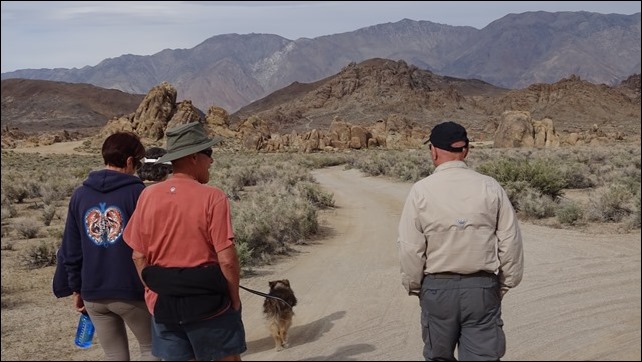 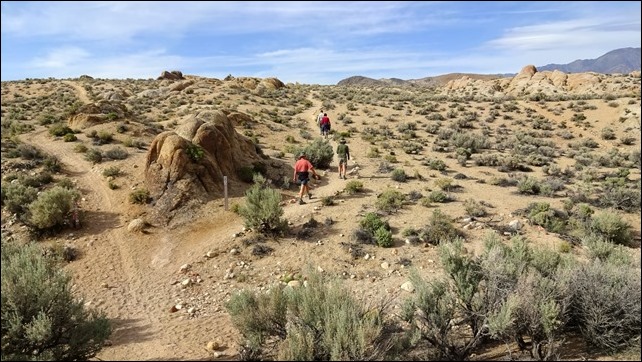 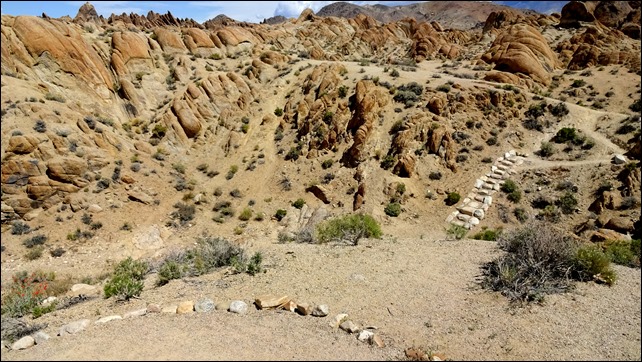 Jim and Andre climbing around  the arch. 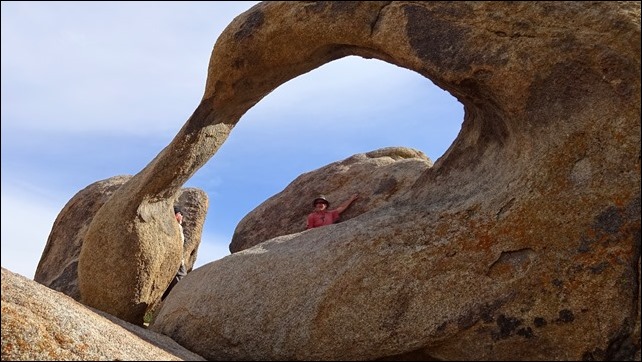 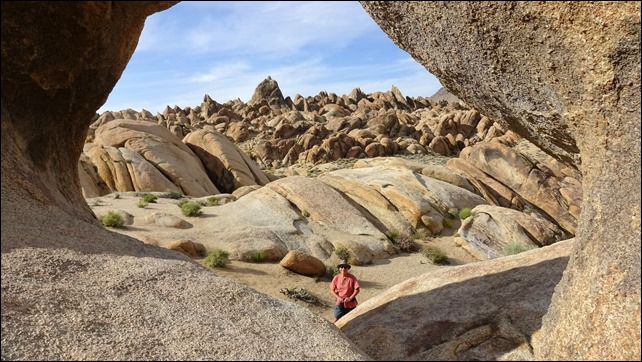 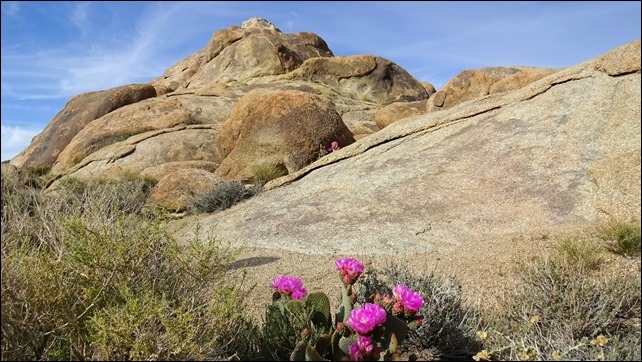 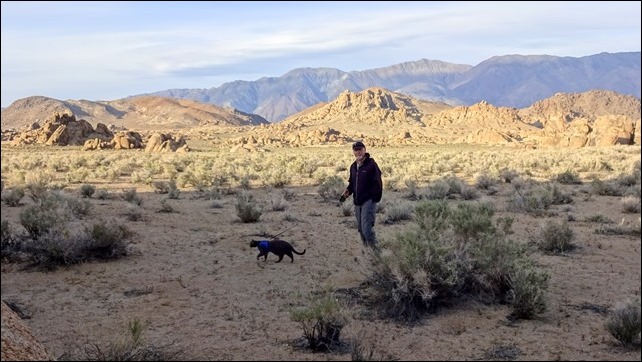 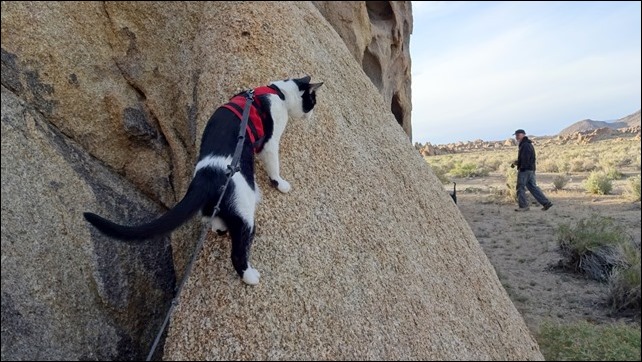 There’s a lizard in that crack somewhere. 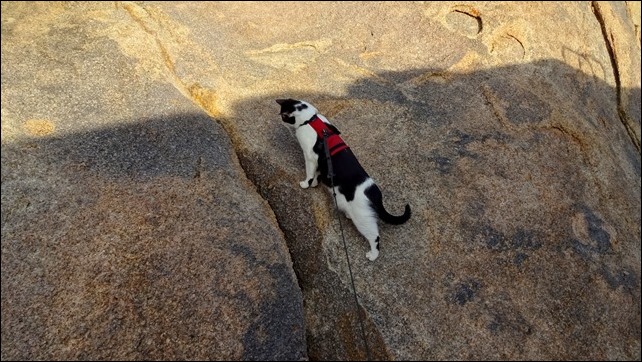 The clouds were just amazing yesterday morning so we had to go out and take more photos. 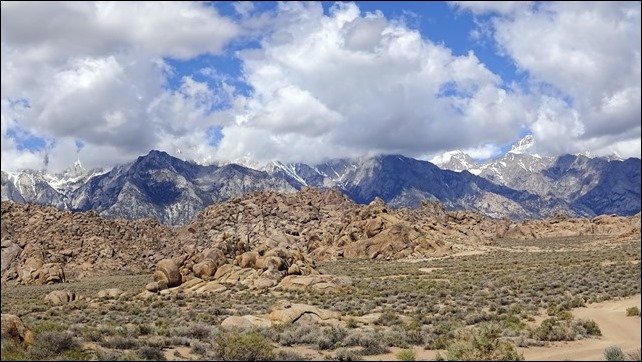 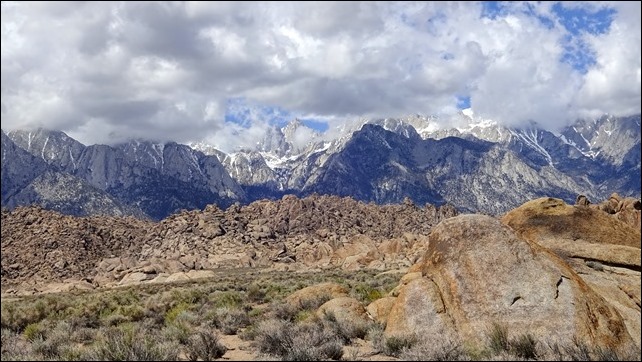 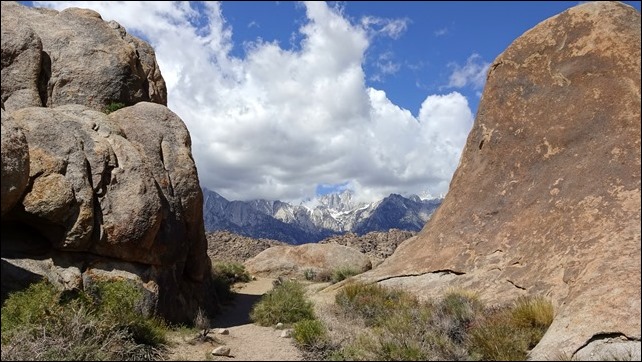 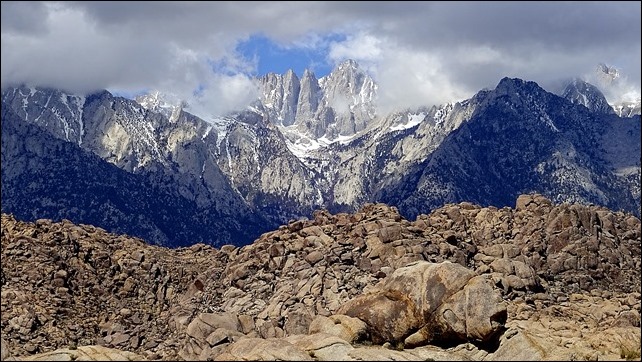 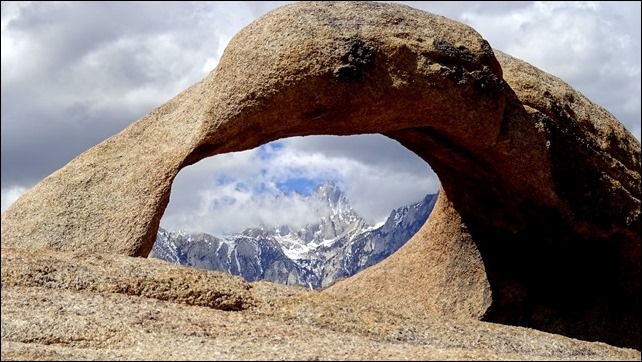 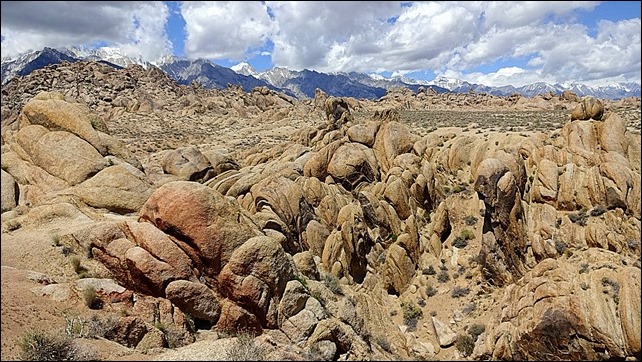 Yesterday afternoon we drove 10 miles north of Lone Pine to Manzanar National Historic Site, where over 10,000 Japanese, many of them US citizens, were interned during World War ll. This is a very sad and embarrassing bit of United States history. I won’t go into details but this is a good article which sums it up nicely. 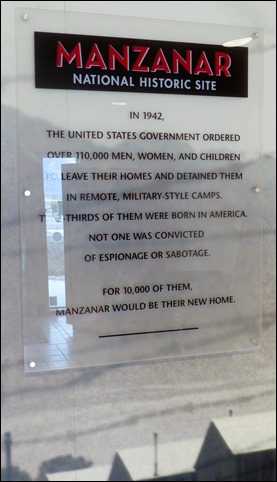 We watched the excellent movie in the Visitor Center and looked at the displays. 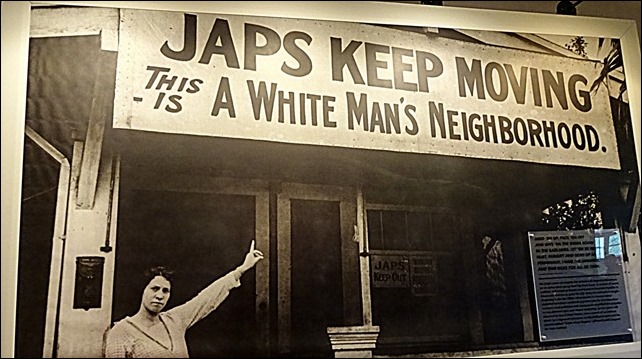 You can take a self-guided walking or driving tour around the grounds. We drove most of it as we were in the middle of a thunderstorm but it would be nice to walk the entire area. 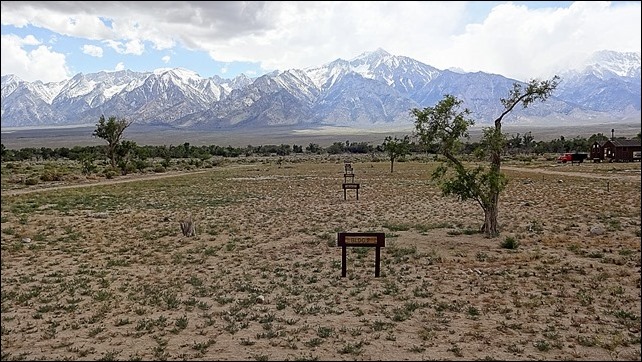 The residences were hastily built tarpaper covered barracks each 20 X 100’ long, where four families of 8 residents lived. There were no partitions between each “apartment” so families would put up sheets or blankets in between. Not only was there a lack of privacy in the living quarters, but there was no running water and communal latrines and non-partitioned showers were located in another building. Early on there was no heat and many openings for dust to get in. If you’re familiar with this part of California you know how cold it can get at night and that the wind blows often, which causes horrible dust storms from the dry Owens Lake. 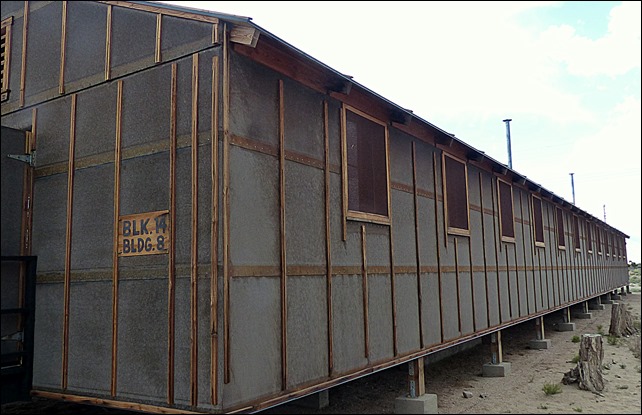 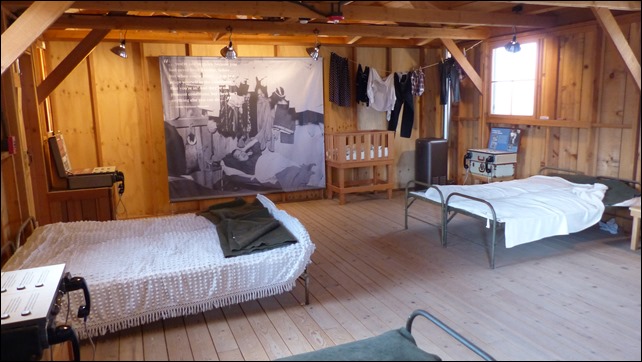 Meals meant waiting in line at the mess hall or going hungry. The detainees made the most of a bad situation by planting gardens and creating elaborate ponds and parks, and holding dances at the rec hall. There were schools, churches, sports fields and even a golf course. But that doesn’t improve the fact that they were unable to leave the barbed-wire fenced and guarded walls of the camp. 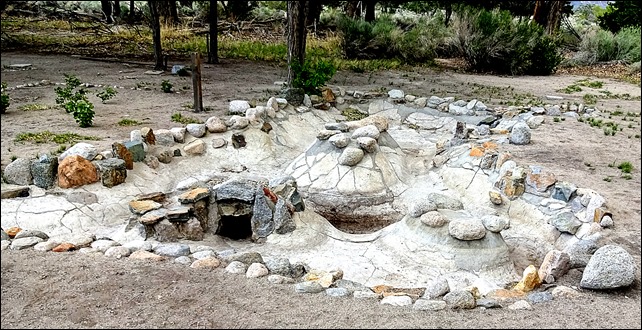 The Manzanar cemetery is marked by a monument that was built by incarcerated stonemason Ryozo Kado in 1943. The posts surrounding the monument are draped in strings of origami, and sometimes survivors and visitors leave offerings of personal items as mementos. The Japanese inscription on the front translates to "Soul Consoling Tower." 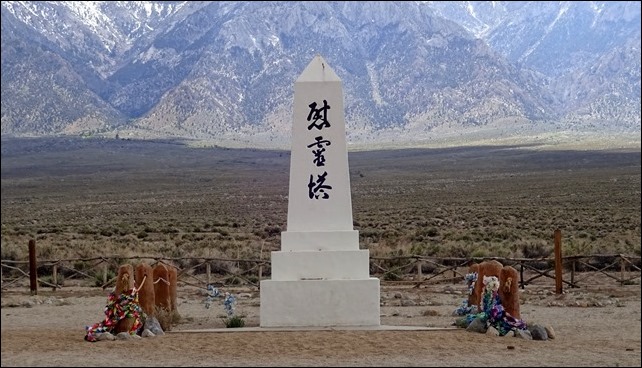 The inscription on the back says "Erected by the Manzanar Japanese, August 1943." Nearly 150 Japanese died during their internment and the majority were cremated. 15 were buried here but only five graves remained as families moved the others. 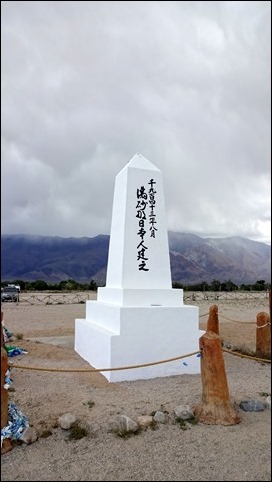 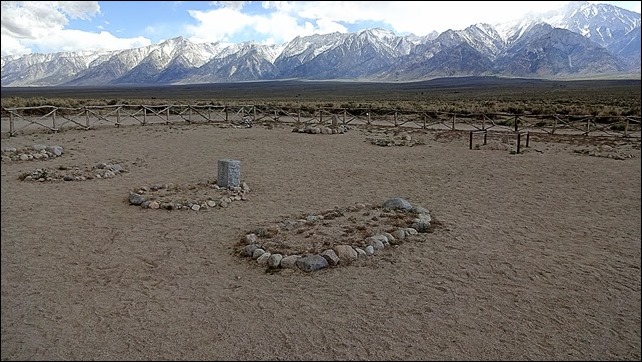 There was even a pet cemetery. 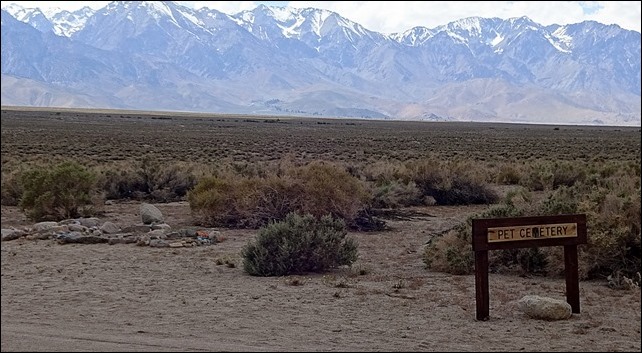 We wondered if they were able to appreciate the beautiful Sierra Nevada backdrop. 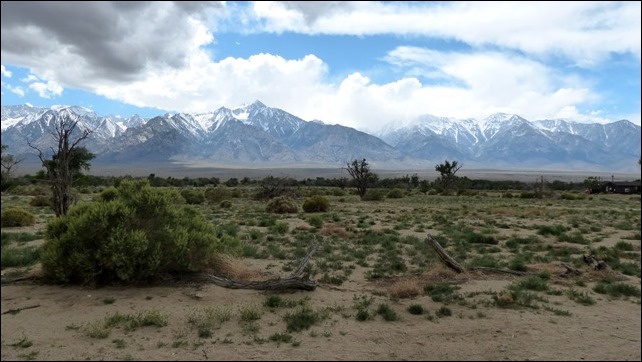 We didn’t visit Manzanar on our first trip to Lone Pine as it was during the government shutdown so it was closed , but I’m glad we came this time. This is a very moving place and one that shouldn’t be missed if you’re in the area. We feel sad and angry at our government that something like this could happen. Jim posted this on Facebook, which I am copying since I thought he summed it up well.

Today we toured the Japanese Internment camp, aka concentration camp at the Manzanar Historical Site north of Lone Pine, CA. I was somewhat familiar with this American stain but had never visited any of the sites. It should be required to thoroughly study this history, that of slavery and our treatment of native Americans in depth before anyone escapes our educational system.

They were ripped from their homes in a matter of a few days, lost their property, liberty and privacy. Two thirds of them were natural born citizens. All too many of us are constitutional scholars when it comes to the second amendment but fervor for the rest of them is flexible. We can practice cafeteria rights, kind of like cafeteria Christians, when the mood and fear strike.

You should be required to review it before you start blathering about American exceptionalism. America has only really been exceptional if you are white and generally wealthy.

We should all think about it and compare it to the manure coming from Trump's mouth about Muslims and Mexicans. We should consider it when we say "fuck yeah" to carpet bombing the innocent along with the guilty.

It always boils down to what the dominant culture is afraid of and in our case it is generally someone who looks different. That is changing whether we like it or not and you can only hope that when the minority becomes the majority they will treat us better than we have treated them.

While time passes and technology advances humans simply repeat their stupidity and willful ignorance with no sign of an end.

The only positive note is that we aren't hiding our history. In the 80's Reagan apologized and we gave the 60,000 survivors $20,000 each which comes to just over 1 billion dollars. In the last decade or so we have spent one and a half trillion dollars on the fabulous airplane known as the F-35 which still isn't ready to go.