Back in the Hills 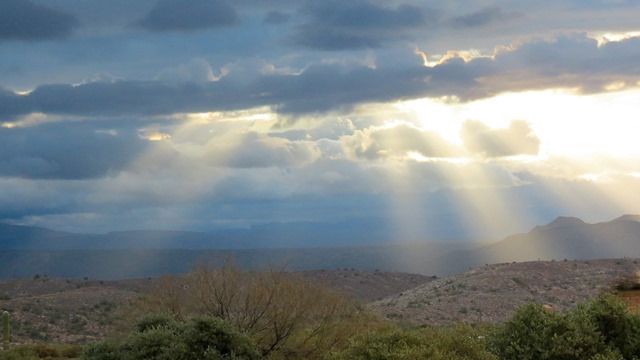 On Thursday February 22 we left McDowell Mountain and set out for California, driving 260 windy miles to BLM land just south of Joshua Tree National Park off I-10. It was our first time using the new Blue Ox Avail towbar we bought back in December, and being a bit different from the old one we had a little trouble getting it to lock when we started off. Jim read the instructions after the fact and it should be easier from now on.

We’ve stayed at this area before and had trouble getting level, as we did this time, but finally found a fairly decent spot for the night. Wouldn’t want to try parking here if it’s raining. 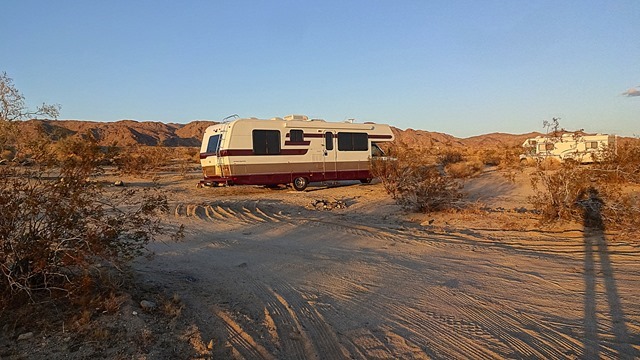 There were quite a few other RVs scattered about. 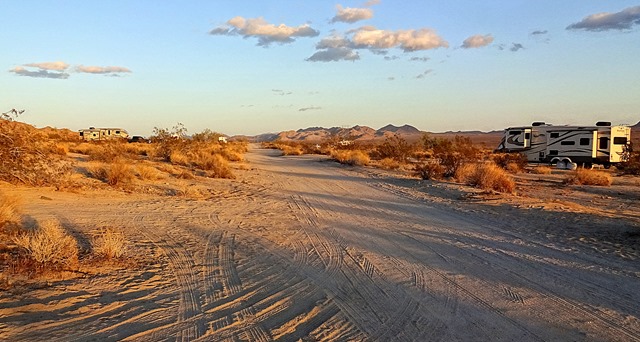 Desert artwork we found on our walk. 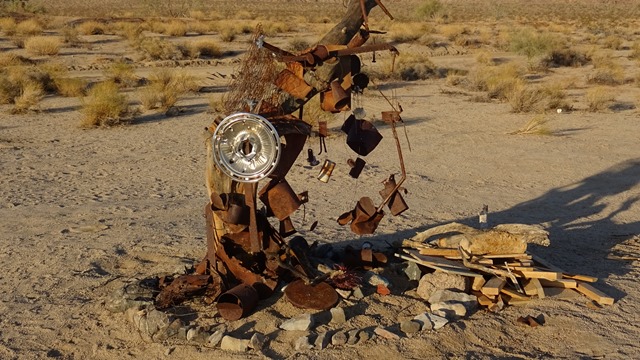 The next morning we drove another 80 miles to Jojoba Hills RV Resort, taking the “short cut” over Hwy 74, a portion of the Palms to Pines Highway. It’s a beautiful drive, although steep and winding, and in the past we have unhooked the car and driven separately. We didn’t find a good place to pull over as we approached the road in Palm Desert so we just stayed connected and Jim did a fine job of getting us over the mountain. The road rises to almost 5,000’ and there was still snow at the high elevations. Unfortunately Jojoba Hills is in a fairly remote location and not easy to get to, but that’s also part of its charm. Many people with bigger RVs take the longer route, continuing west on I-10 and going south through Hemet, which adds about another 30 miles.

Our site, which we are very happy with so far. 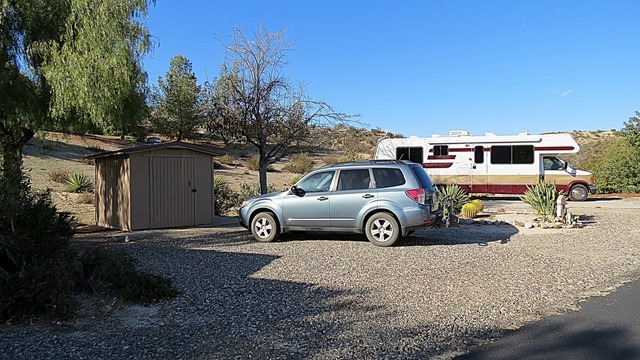 How nice to have a shed for our bikes and other things we’ve been hauling around in the car. 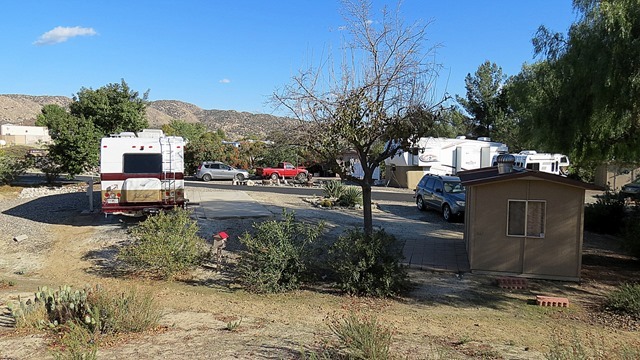 Our neighbor across the street who lives in the 5th wheel has a Lazy Daze as his travel rig, and you are allowed to park it at your site for a few days in preparation or return from a trip. There is a large storage lot across from the office where you can store another RV or vehicle at no extra charge. 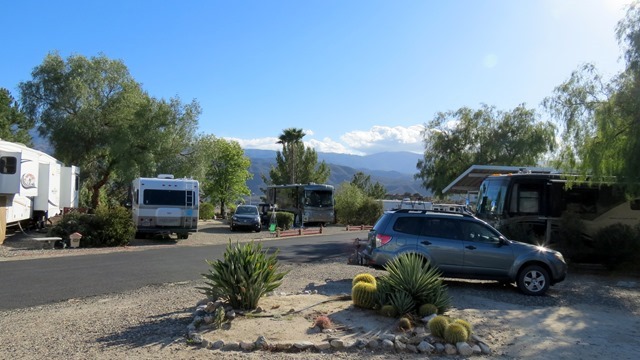 We love having no neighbors behind us or on our driver’s side, just the desert. 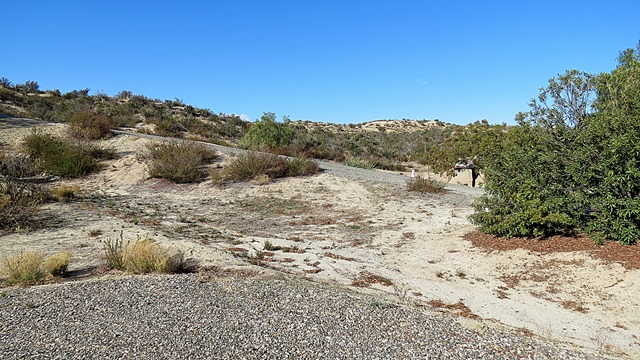 The pond across from our site. 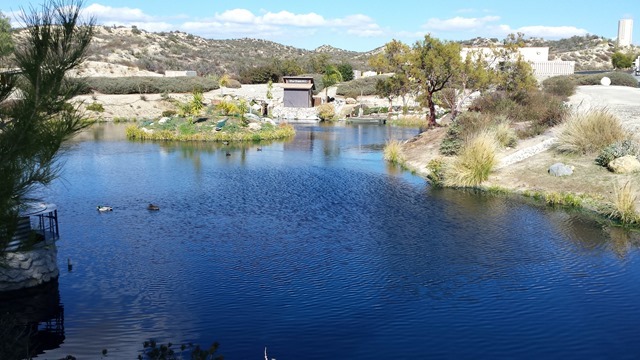 Another pond across from the clubhouse, aka “Friendship Hall”. 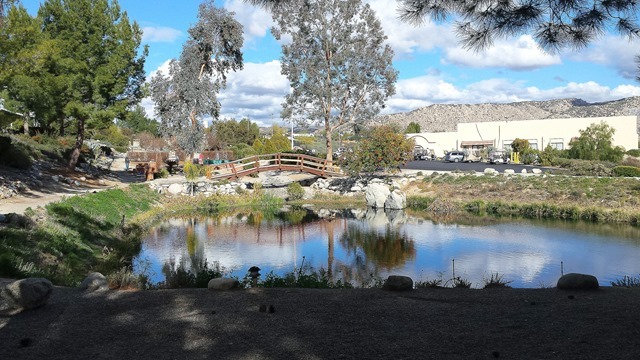 Friends Terry and LuAnn were here for four more days before heading off to Chile, so we spent time with them, having happy hours and dinners. LuAnn is a great bartender, making us blood orange margaritas and bourbon smashes. One afternoon we met them at our favorite Temecula brewery, Karl Strauss, for happy hour and a bite to eat. It was as good as we remembered, and of course the company was great. 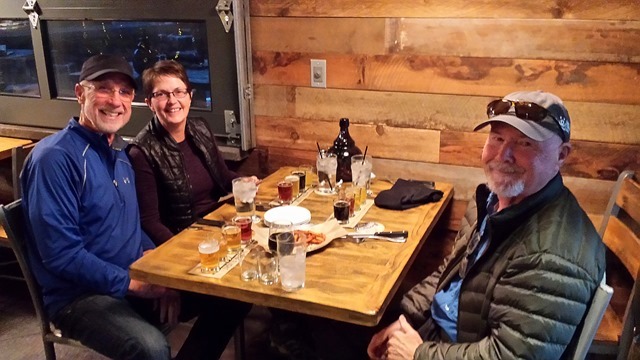 We were sorry to see them go but in exchange for keeping an eye on their place they are letting us use their golf cart while they’re gone. Although we are still walking most places, it has come in handy for hauling laundry and picking up some packages at the mail room. We’ve talked with them on the Zello app from Santiago, Chile where they arrived safely but tired. Zello is a very cool walkie-talkie app that can be used anywhere in the world for free as long as you have WiFi or data service, and amazingly the sound quality is better than most cell phone calls.

We’ve had a couple meetings, one to go over our membership paperwork, and the other with a couple from the welcoming committee to answer questions and review the different volunteer opportunities in the park. We signed up for the park’s internet service the other day, and a guy came over to hook up the router and modem and make sure it all worked. He is from JCATS (Jojoba Communications and Technical Support committee) and Jim got to talking to him about volunteering with them. I was surprised that Jim managed to get up  and go to an 8AM meeting on Friday, and plans to go to another meeting on Monday. He said it was technically way over his head but he likes learning about all that stuff, and the park is switching to a different internet system in a couple months, so they have lots of work to do.

The weather has been cold with a few days of rain since we arrived so we haven’t played pickleball in the mornings, but we did hit the ball around one afternoon just to be sure we remembered how. There have been people out there playing when it’s only been in the 30s and 40s but we just can’t bring ourselves to do that. It will warm up again and we’ll have plenty of opportunity.

We do like having the fitness center so close, although we got spoiled by the machines at Anytime Fitness in Fountain Hills. Here they don’t have as much equipment, but we’re just having to do things a little differently. I joined LuAnn for Zumba last Sunday and plan to go back tomorrow, and yesterday I went to a two hour line dance class. I took line dancing classes when we were in Mission, TX 5 years ago so I’m pretty rusty, but it was fun and good exercise. I can’t talk Jim into going, but maybe I will one of these days.

On Wednesday we are heading out for a week to Morro Bay State Park and the big Lazy Daze get together. We attended it in 2014 and look forward to meeting up with people we haven’t seen in a long time. Besides, it’s a good excuse for another visit to the beautiful Pacific coast.

Since we have no more cat photos, birds will have to do. These cedar waxwings were sitting in the mulberry tree on our lot one morning when I got up. I love the way the two in the middle appear to be having a heated conversation while the others are ignoring them. 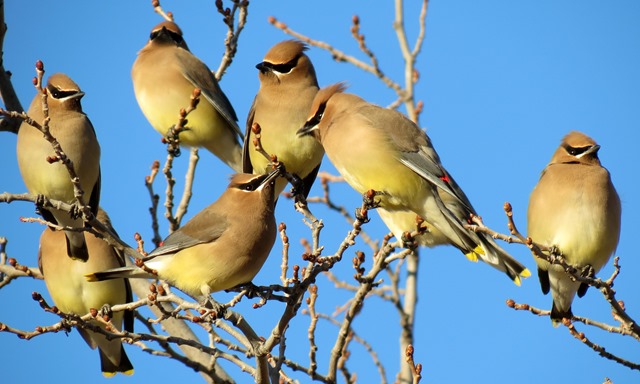 See you next week at the coast!