More from Prescott and Another Trip to Algodones


A few photos from our final day in Prescott, where we hiked the 4.5 mile Salida Gulch loop with Eric, Maureen and Sandy and saw some petroglyphs. 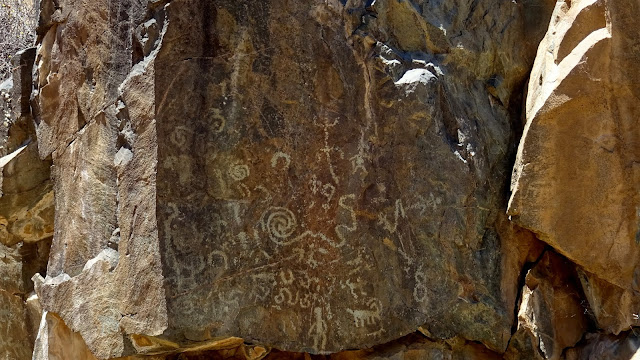 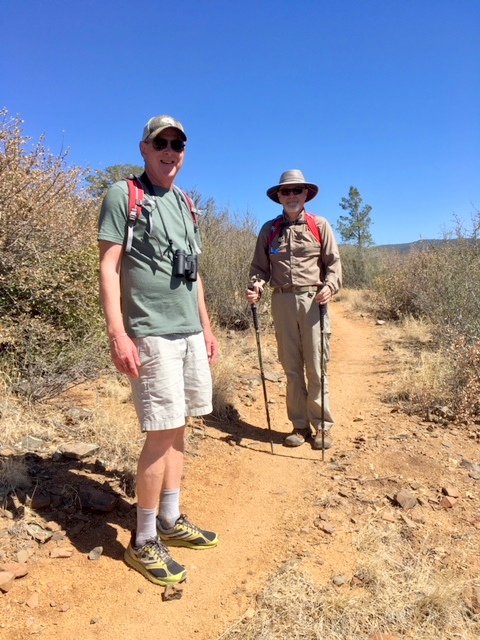 Maureen made us laugh while making us pose. 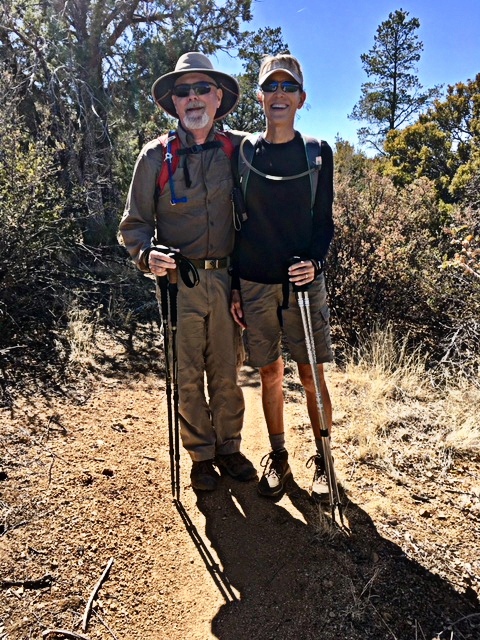 That evening we met John and Sandy at Tara Thai, where the waiter felt sorry for us trying to take a selfie. 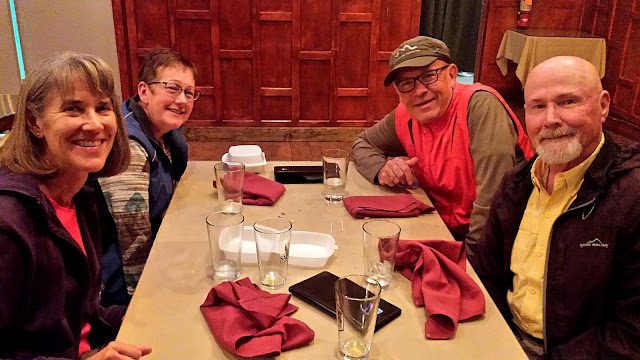 Although it is definitely a twisty mountainous road, Jim had no problem driving the Lazy Daze on Hwy 89 between Prescott and Congress. We hooked the Subaru back up after we got down Yarnell Hill, and with sharing the driving it was a surprisingly easy 330 miles back to Jojoba Hills. Terry and LuAnn returned from South America while we were gone so we are enjoying having them as neighbors.

One of the ponds at Jojoba. 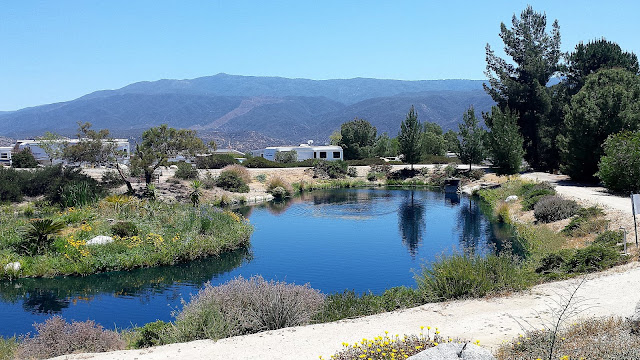 Besides the usual, we spent last week cleaning up since our weather has been so pleasant. Jim scrubbed the roof of the Lazy Daze after removing all the vent covers, then did some caulking while I cleaned and polished the rest, along with the car. Now we’re in the process of refinishing some of our cabinet doors and drawers. It’s great to have the shed to work in.

Jim was walking back from the fitness room the other day and saw this bobcat strolling down the street. By the time he could get his phone out it ran up through a site and down a wash. Another couple was there and she managed to get a photo. They are spotted hanging around the park frequently. 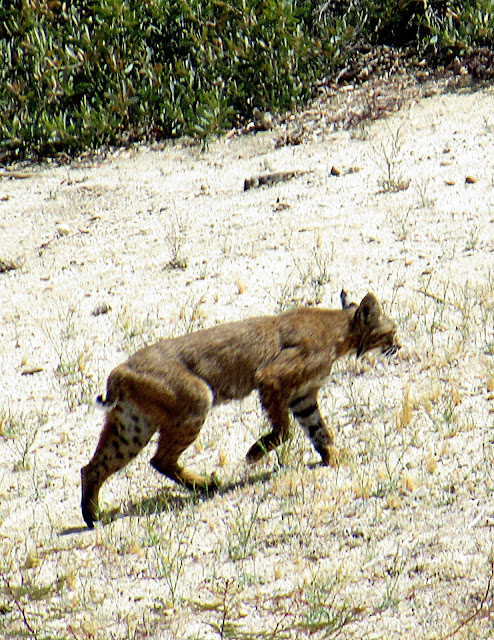 Monday we drove to Algodones where we each had appointments to get a crown, or so I thought. Jim went first, got prepped and had a temporary put on. When it was my turn, Dr. Fonseca looked at my tooth and decided there was still a little swelling of the gum where I had the extraction six weeks ago She didn’t want to make a crown that might not fit well once the swelling completely resolves, since the crown I need replaced is next to the extraction site. No big deal but it means another trip to Algodones in month or so, or she said I could wait until the fall and get it done when I return for an implant. She polished the old crown a bit since it was irritating my mouth, so I may just end up waiting. She said it should be fine until then but not to chew anything hard on it. Since I’m missing the tooth next to it I’m not chewing much on that side anyway so that shouldn’t be a problem.

Candid shot of Jim in the dental chair. 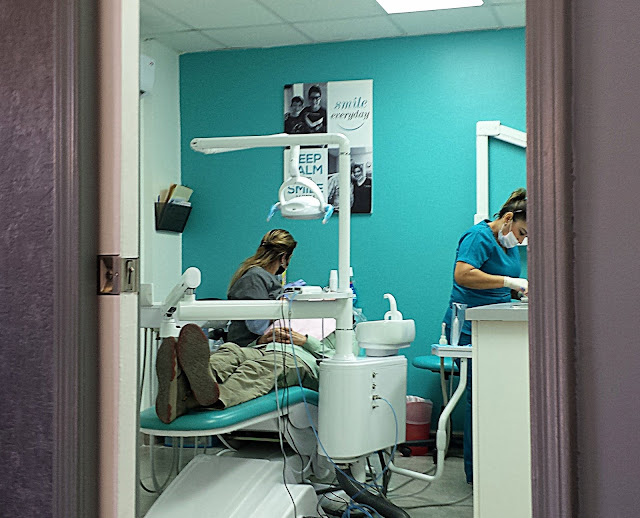 Jim’s permanent crown was ready at noon on Tuesday so we spent the night at the Best Western at the Yuma Palms mall. It’s been many years since we stayed in a motel room, and although it was surprisingly nice, we couldn’t believe how much stuff we had to pack just for an overnight trip. And of course we forgot a few things. We have been spoiled by traveling with all of our worldly belongings in the RV for so long.

There isn’t much going on in Yuma, so we did a little clothes shopping since the mall was convenient, used the fitness center, then took advantage of our two free happy hour drinks, beer or wine. Since the beers were all light we each had some wine, and took the second glass back to our room where we ordered a Domino’s pizza to be delivered, then watched a movie. We are such party animals!

After a night of tossing and turning despite the bed being quite comfortable, we went over to check out the free breakfast, which as we expected didn’t consist of much in the way of healthy foods except for oatmeal and fruit. Then it was back to Algodones where it didn’t take Dr. Fonseca very long to put on Jim’s permanent crown. It looks and feels good, so he is happy. It’s really great going there now that all the snowbirds are gone. There were very few people on the streets and it only took a couple minutes to get through customs both days.

Our plan right now is to hang around Jojoba until after the 4th of July, with maybe a couple short trips in between, then start working our way to Canada. But knowing us that could all change. We’re just happy to have a place to spend two of the big summer holidays.

And one more photo.  A group of Gambel's quail came strolling through our yard the other day, followed by at least 10 baby chicks. They were so cute trying to jump up into our fountain for a drink. 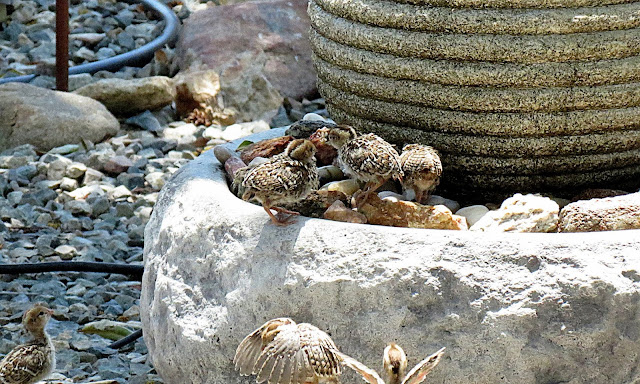