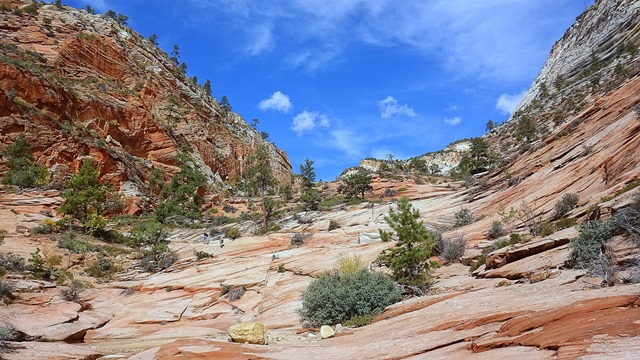 Mark and Bobbie discovered this area a couple years ago, another unnamed canyon to explore west of the small Zion tunnel. They found an owl along the way, so they dubbed it Owl Canyon. After a steep, sandy climb down it’s a fairly level walk for a bit. 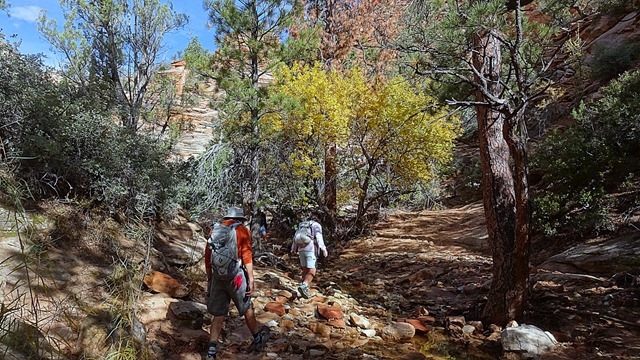 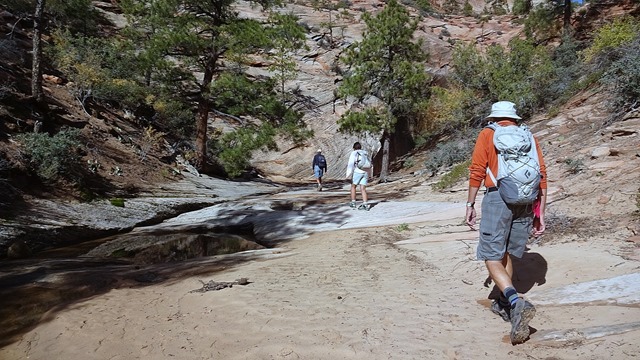 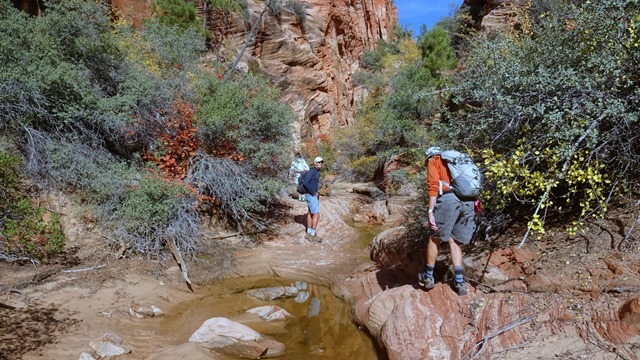 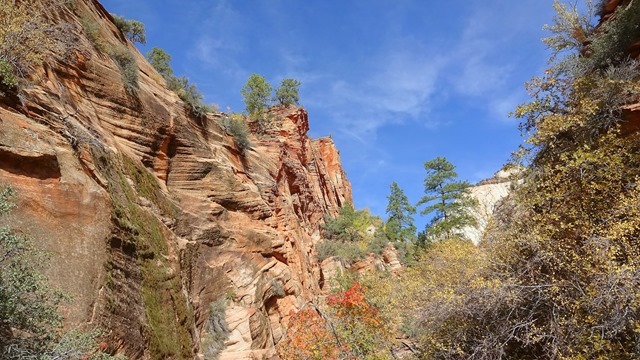 Then we came to this spot where some of us needed a boost and encouragement to make it up. I hate having a panic attack so early on in a hike, because then I worry about how I’m going to get down on the way back. 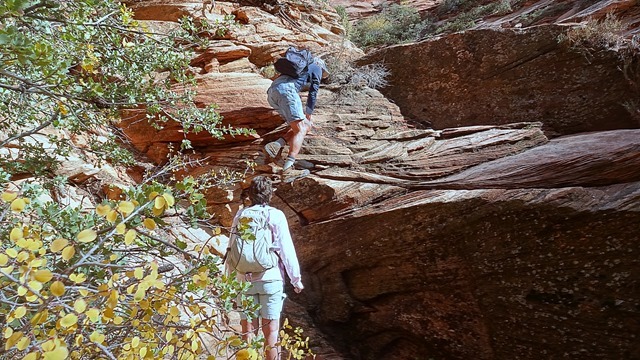 Luckily the scenery was a distraction from my worrying, and except for a few places, it was fairly easy hiking. 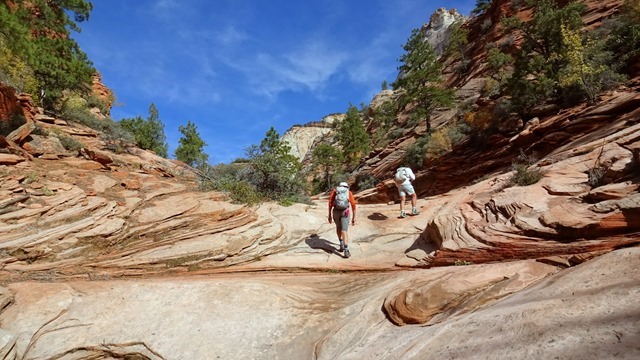 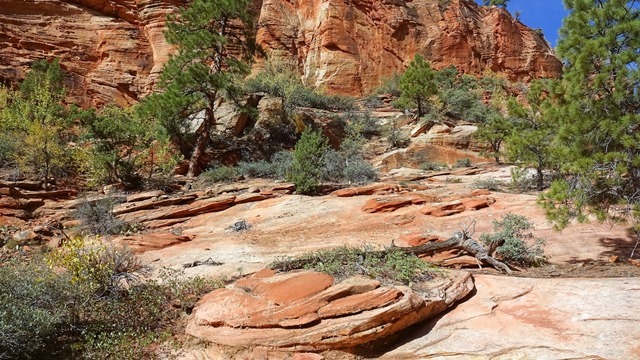 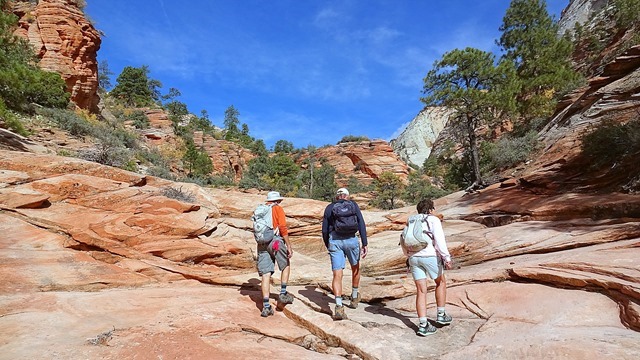 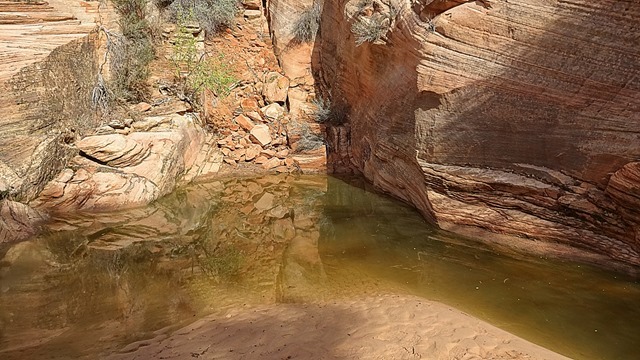 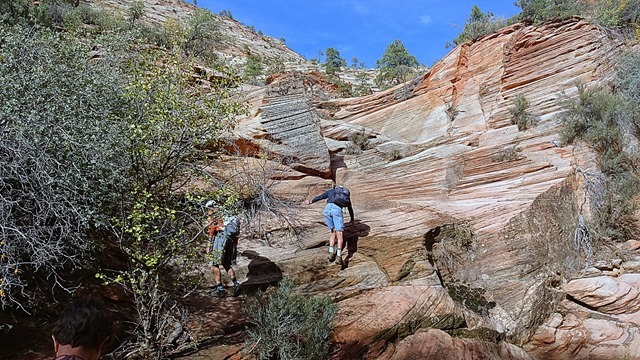 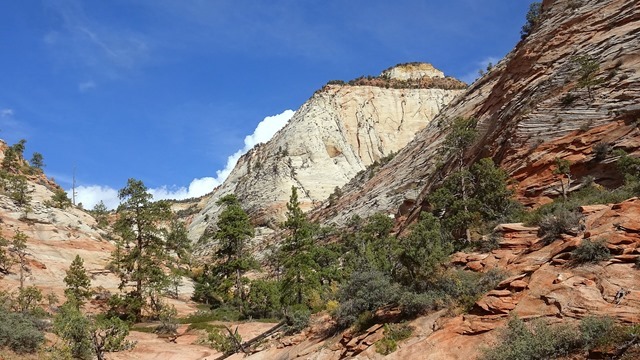 The maples have really changed over the 11 days we’ve been here. 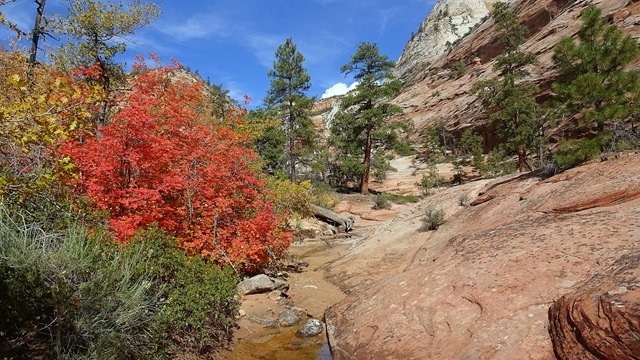 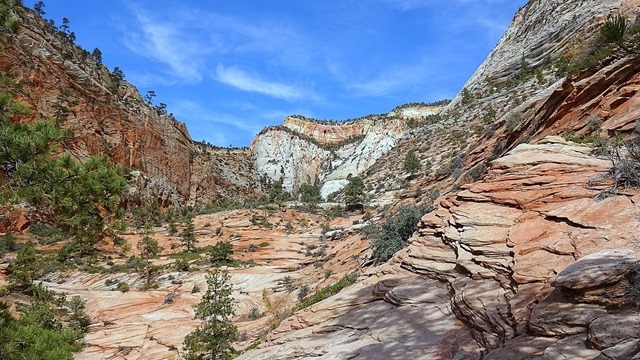 There were a couple times when I thought I might be joining this poor guy. 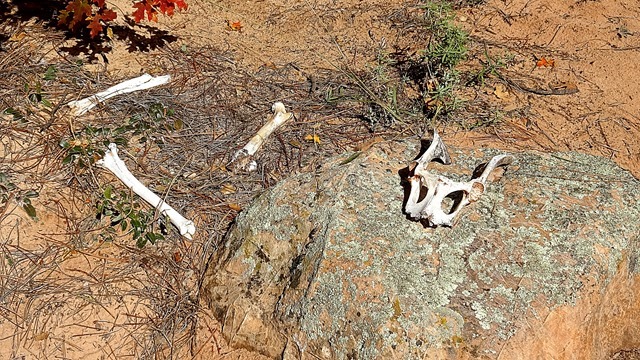 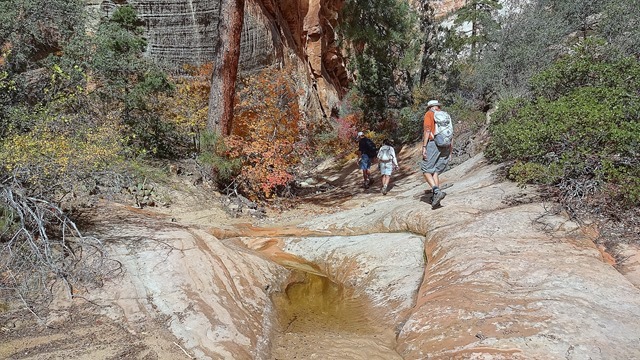 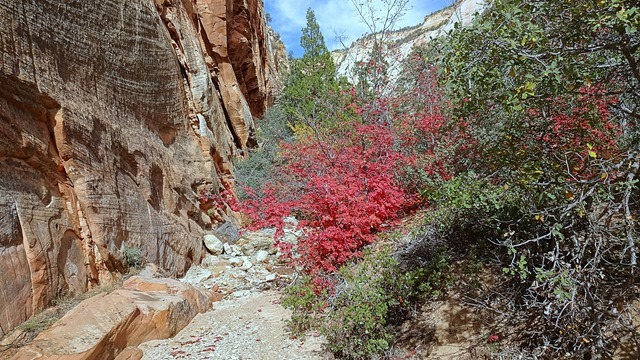 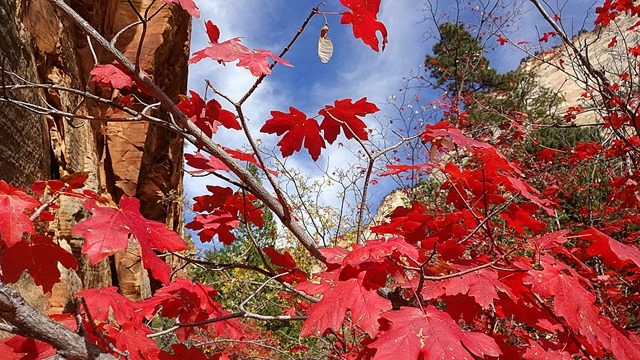 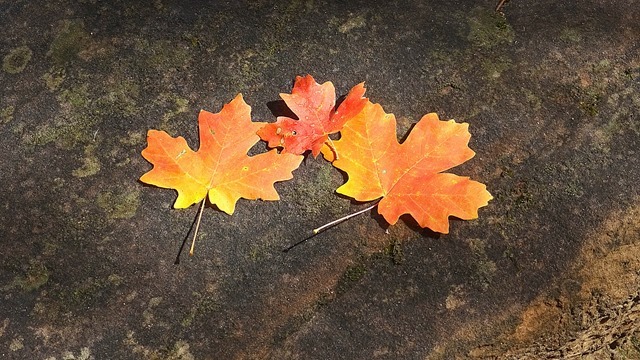 Recent rains and deep pools made for some difficulty getting around the water in places. After throwing in some rocks for stepping stones, Chris managed to get across but I had already decided this was my turn-around point. Mark followed Chris but had a slip of his foot, which resulted in an unintended split and a painful strain. 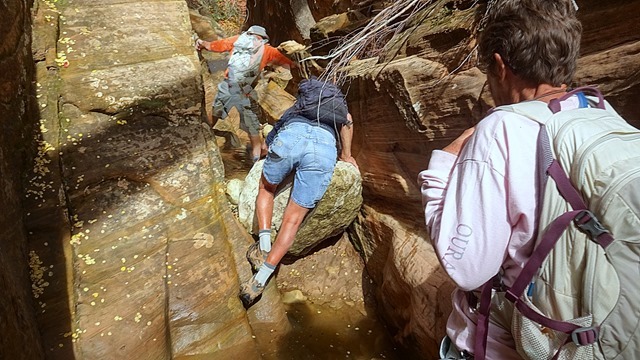 But of course he kept going. 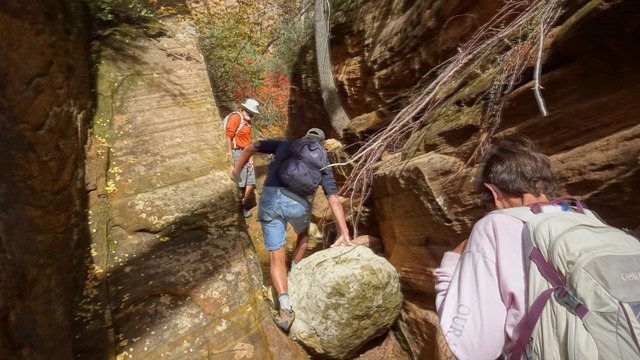 Mark then tried to help Bobbie across but her legs weren’t long enough, so she and I turned back. They didn’t get too far before coming to another major obstacle that was impassable so we were glad we didn’t follow them. 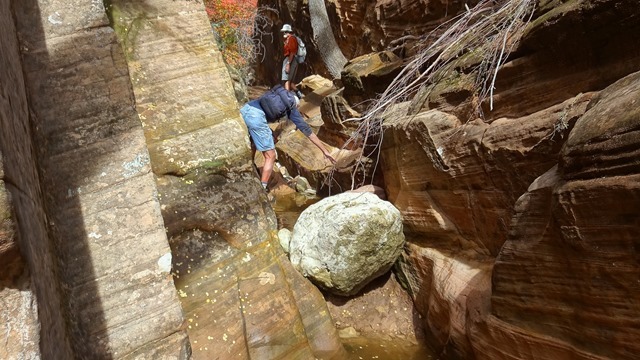 I noticed this interesting place in the rock wall that reminded us of a fossil. 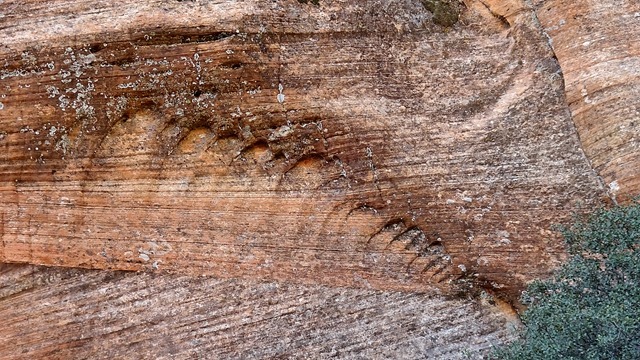 Much to my surprise, getting back down the places I could barely get up turned out to be easier than anticipated. More photos of us crawling around can be found on Box Canyon Blog.

And no owls were seen on this hike, but that doesn’t mean they weren’t hiding out in the trees. 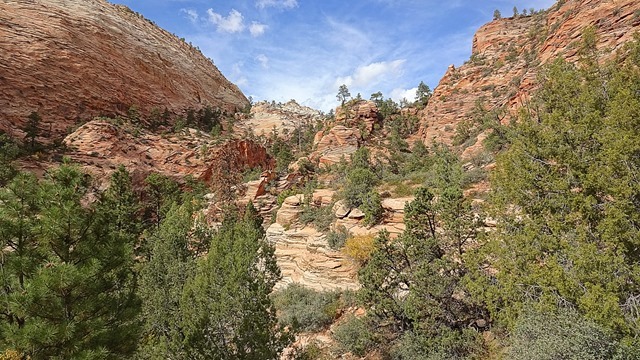 Here’s a photo of our new neighbors, a Japanese couple who squeezed in between Chris and us as we were coming back from a walk this afternoon. Definitely bad boondocking etiquette, especially since there are plenty of other places they could have camped where they would have had privacy and not invaded ours. Chris gave up trying to communicate with them and was kind enough to move his truck, which was parked where their van is, because they were going to drive around the back of our rig to get to this spot anyway. Mind boggling. 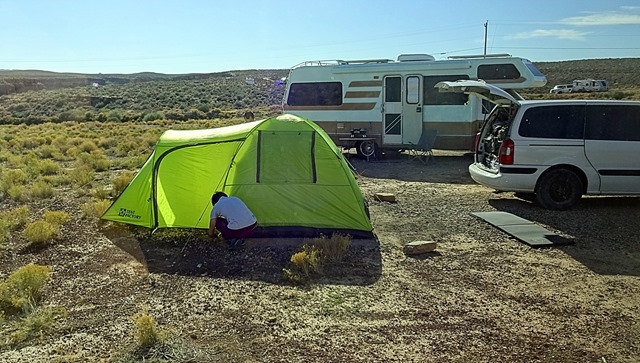