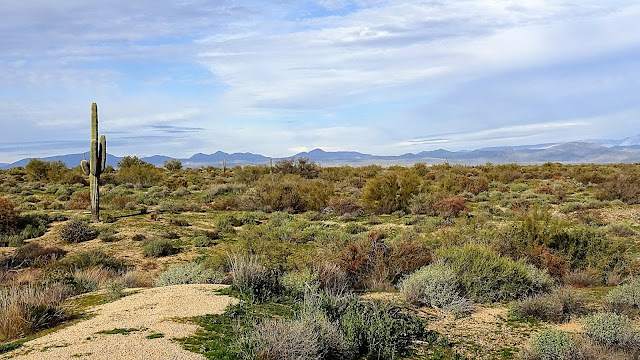 Decided to see if Open Live Writer would let me post since I’ve seen some other bloggers having issues again but it won't, so I'm back to Blogger, which I dislike but may just have to get used to. It's not that it's hard to do but it's more time consuming loading photos to Blogger than it is using Open Live Writer and Picassa, and it's harder to get the spacing the way I want it.

Andre and Rose(The Road In Between) arrived on Monday for a few nights on their way to Mexico for their first RV caravan. They helped me celebrate with a bike ride and dinner at La Botana in Fountain Hills.

Besides the four of us there were several other people at the picnic shelter. It was a perfect day for a ride.
\ 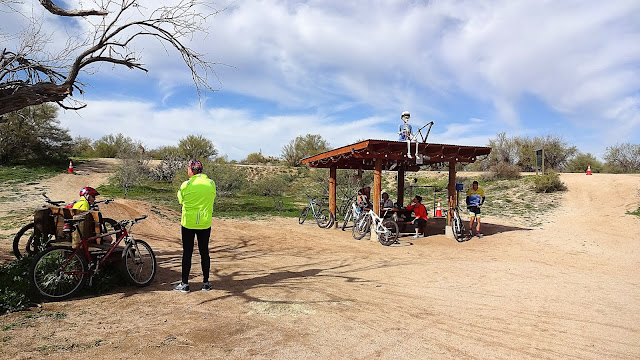 Andre and Jim taking a breather. 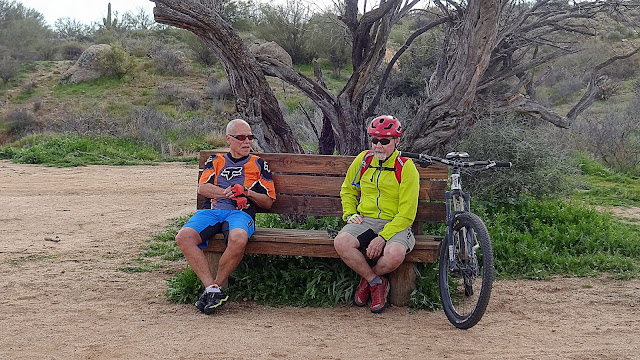 We coaxed Andre to get some air but he didn’t want to risk injury. 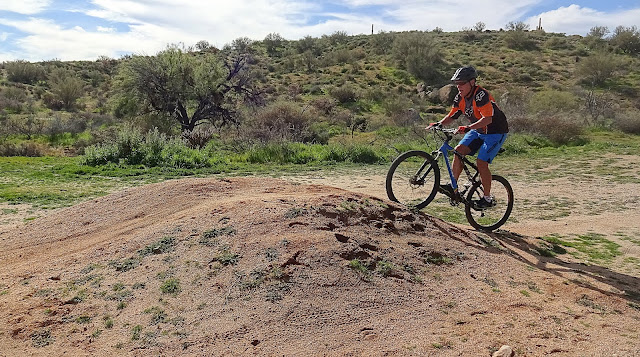 Another break on the Pemberton. 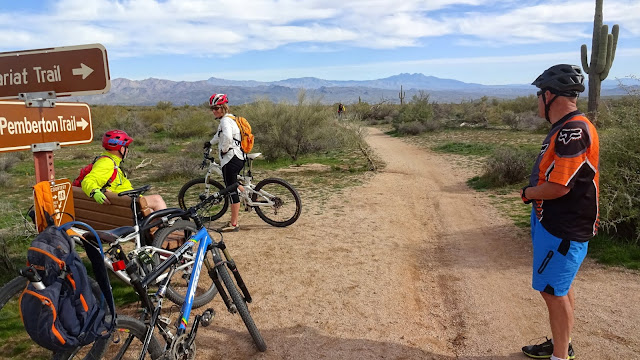 Soon after we started down the Lariat I spotted Andre stopped on the trail in front of me. This could have been a disaster when his left crank came off, staying attached to his shoe by the pedal. We looked back a little way for a broken screw or bolt but didn’t find it. He was able to push the crank back in but had to take it easy on the way back and cut the ride short. We’ve never seen that happen before. Good excuse for a new bike. 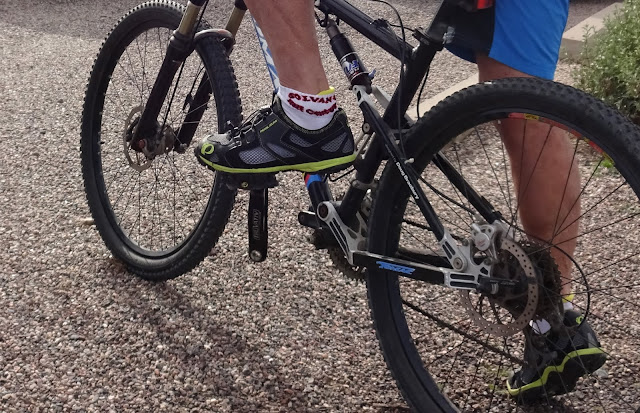 The sky on our way to dinner that evening. 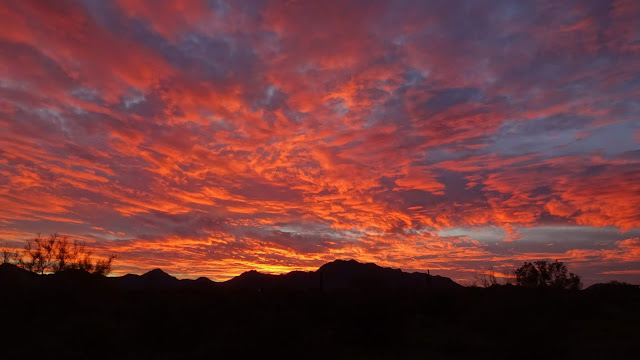 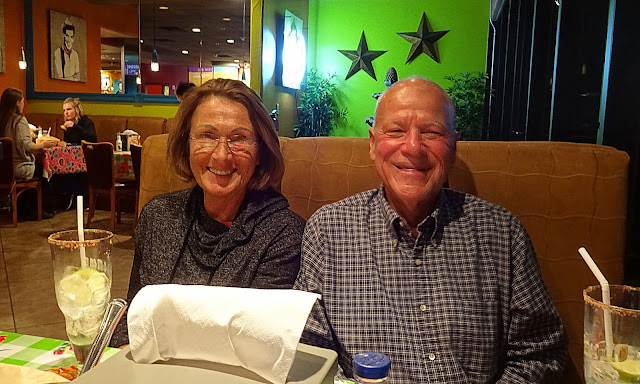 Birthday girl and Jim. Without divulging my age let's just say I’m excited that I have only one more year until Medicare.😉 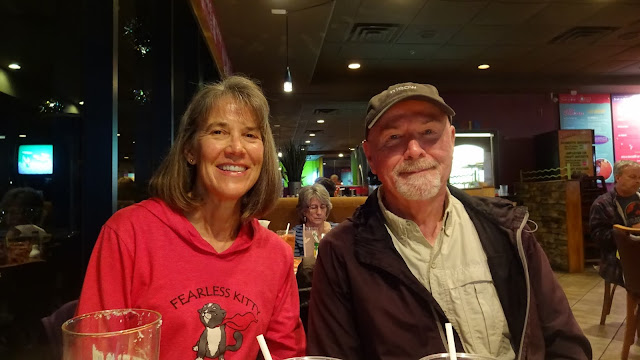 The next day we took a drive into downtown Phoenix to meet up with Iowa friends Chuck and Carla, and Debbie, for lunch at Mother Bunch Brewery. Although we saw Debbie last week we haven’t seen Chuck and Carla since we were in Canada together last September. They are spending a week at Lake Pleasant Regional Park on the northwest side of Phoenix, so we all had about the same distance to drive. Traffic was crazy as usual but the brewery and laughs were worth it. 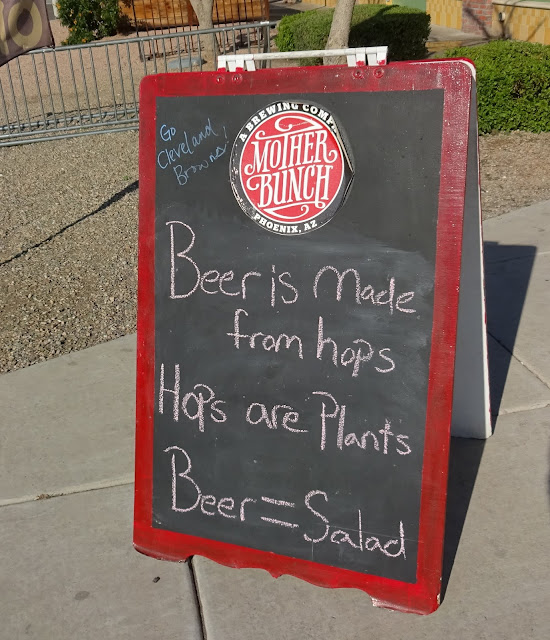 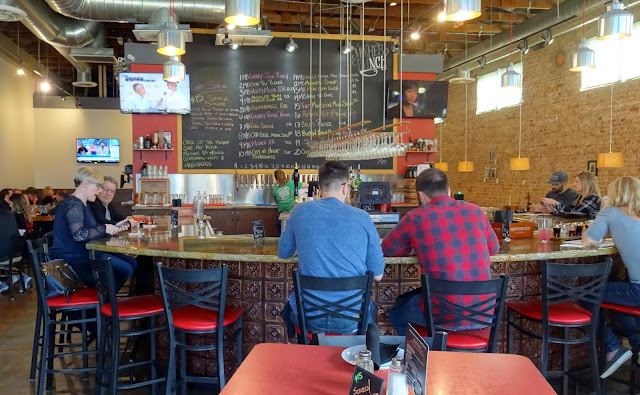 Carla, this is for you! 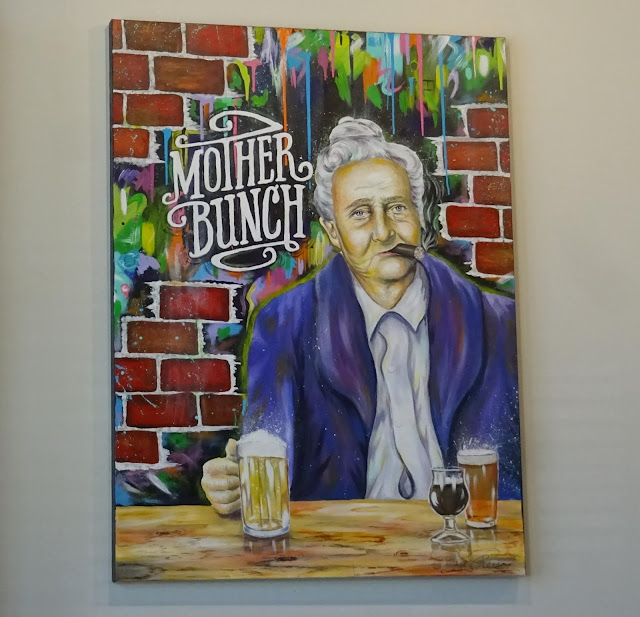 Carla, Chuck, Debbie, me and Jim, seated on old church pews. The milk stout on nitro was very good, as were the IPAs I tried. Everyone like their meals. too. We would definitely go back there again if we were in the neighborhood. Our waitress was a good sport about having to take our picture with three different cameras.

It’s hard to believe we’re down to our last two and a half weeks here at McDowell Mountain. More visits from friends are coming up, and of course we’ll be back taking care of these guys at Fearless Kitty Rescue several more times. 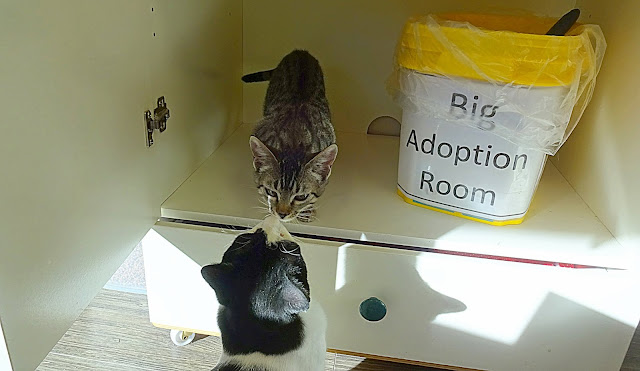