Yesterday 1/19, we left Elephant Butte and headed about 60 miles north to this wildlife refuge. The only camping nearby is a private campground, Bosque Birdwatchers RV Park.

It is basically a gravel parking lot but we are parked at the west edge and have a nice view of the mountains and landscape including lots of Gambel Quail moving along on their busy little feet.

Late yesterday afternoon we headed into the refuge for a short hike and to watch the Sandhill Cranes return for the day. A view from the trail. 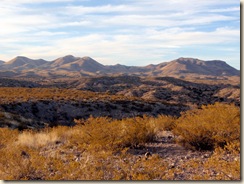 A couple of shots of the cranes. 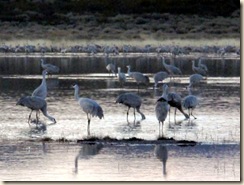 It is tough to get good shots of the birds with my camera. It only has a 7x optical zoom and the birds are just too far for that. Also, I attempted to shoot them in burst mode to hopefully freeze the action of them landing but found that the lighting at that time of day is too poor to take good shots.

We met Kate and Terry Klein at the RV park and got to see more of her photos taken with a Panasonic digital camera with an 18x optical zoom and they were very good.

We left there today 1/21, and headed to Valley of Fires campground 3 miles from Carrizozo, NM. More on that in another post.

Forgot to add that while at Elephant Butte I made a few changes. We got our portable water softener and that has greatly improved the condition of the water here both in feel and taste. It is a Mark 8000 made by Flow Pur company.

Also, I added four halogen, two over the sofa and two over the barrel chairs. While the fluorescents provide plenty of light it is often way more than we need. I took this shot with no flash, all four of the lights were lit. 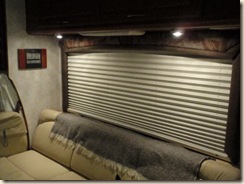