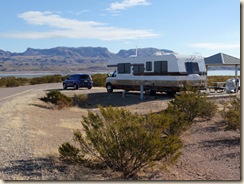 Got here yesterday afternoon. This is the largest lake in New Mexico. There are two camping areas in the park. One is almost in Elephant Butte and the second, where we are, is about 8 miles north. After having seen the main campground today we are glad we are here.

Very few campers in this one and it has expansive views of the lake.

When we arrived we were surprised to see two other Lazy Daze campers. We knew one would be here but not the second. Andy Baird, the moderator of the LD group on yahoo had been here almost three weeks. The second LD is owned by a woman who is also living in it full time. We have not had a chance to meet her up to this point.

Andy was able to repair my new camera. The one I dropped. He created a new part from a tin can with scissors and a Dremel drill.

Enjoyed meeting and speaking with him at length about rving in general and living in one full time.

He has made the most out of his rig in terms of livability and organization.

Today we took a short walk but spent the better part of the day doing laundry and shopping at Wally world.

I also broke down and ordered a water softener. The water in the west is very “hard” which leaves lots of spots on everything and builds up calcium deposits on everything including the hot water heater and plumbing.

They aren’t cheap and weigh about 19 pounds and stand 21” tall. On the one hand we want it because of the spots. I also want it in hopes that by removing the minerals it will improve the taste. The built in water filter just isn’t taking care of the taste that I believe is imparted by the minerals but that remains to be seen. If that doesn’t work it will be bottled water for me.

As always, for more photos click the link in the upper left corner and check the Elephant Butte folder.