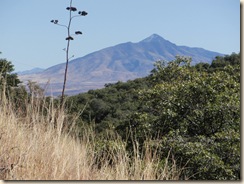 Spent yesterday at Coronado National Memorial, a national forest area in southeast Arizona. It was a beautiful, remote park with several hiking trails but no camping. From the top of Coronado Peak you could see Mexico and the wall and fence trying to keep out the illegals. Must not be working too well since the area was full of border patrol and signs warning people not to hike alone. Today we left Bisbee and headed to Kartchner Caverns State Park near Benson, AZ. We passed through Tombstone on the way so we had to stop and check it out. Much as we expected it was a hokey, touristy place. We did see a “comedy” gunfight show, which unfortunately lasted much too long. But we can say we’ve been there! 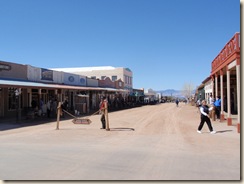 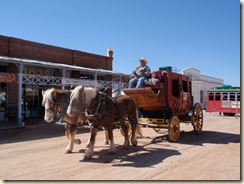 And we parked in front of a giant statue of Wyatt Earp, which several people were taking lots of pictures of. Jim refused to be one of them but he did take a couple of the main street and our friend captured this special image of us. 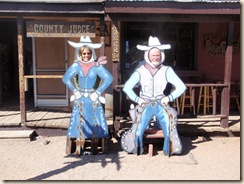