On our way out of El Centro yesterday we stopped at Wal-Mart and a gas station. This was the first time we’ve put gas in the rig since November 30, so it pays to hang around one place for awhile, especially since gas was $3.29/gal.

The drive from El Centro to Yuma along I-8 passes mile after mile of lettuce fields, then gets more interesting as it goes through the Imperial Sand Dunes. There were lots of RVs and off road vehicles. 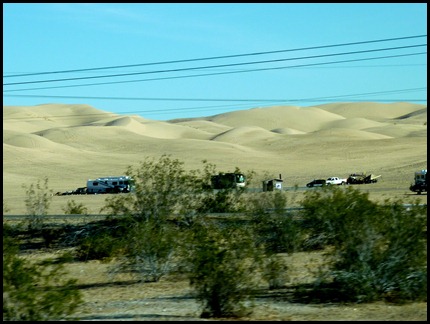 We spent last night in a big dirt parking lot behind Paradise Casino, just outside of Yuma. We were not the only ones looking for a free place to stay. 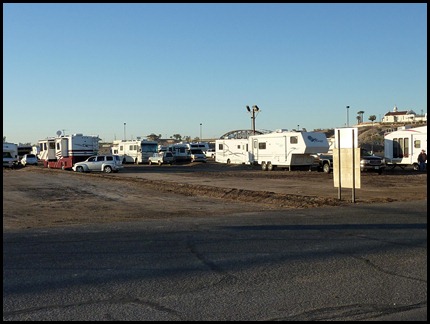 New player’s club members received $20 in slot play, and since it was my birthday yesterday, I got an extra $10. I spent my $30 fairly quickly, but Jim had a good machine, and ended up coming home with $50.02! So they actually paid us to stay there.

I thought we might eat at the Italian buffet at the casino, but everything had meat in it except the Alfredo sauce. So we  took a ride to check out the Yuma Foothills area, where lots of RVers stay, and found a Domino’s pizza, which we brought back and ate in the rig. Another exciting birthday!

We are waiting on a new tire pressure sensor from Doran, which was sent out last week. If it’s not in the mail today, it’s another night in Yuma. At least gas is only $2.99/gal here.