This was a big weekend for the town of Truth or Consequences, also known as T or C. It was the 62nd annual Fiesta and Renaissance Fair, held at the Ralph Edwards Park along the Rio Grande. There is a parade, poker tournament, bull riding, live music, duck race, junk boat race, arts and crafts vendors, karaoke contest, etc.
Also the Geronimo Springs Museum downtown had free admission all weekend, so we decided to make a day of it and head to T or C yesterday. Our first stop was for lunch at Cafe Bella Luca, a wonderful Italian restaurant which we’ve eaten at before. The grilled pizza is excellent, and the atmosphere is very upscale for the town. We realized it was the first time we’ve eaten in a classy sit down restaurant in a long, long time, and it was a nice change.
The Geronimo Springs Museum was just around the corner, so we stopped in to see what was there. 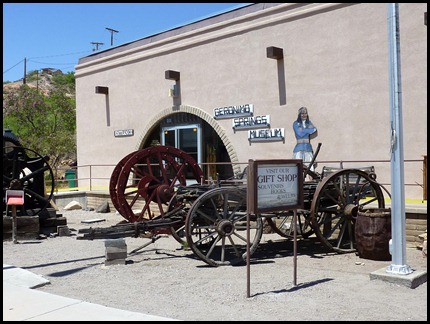 They have an interesting collection of things relating to the history of Sierra County, NM. There is a huge collection of prehistoric pottery and arrowheads displayed in a really creative and colorful way, a room dedicated to the history of Geronimo, an old log cabin, rocks, fossils, military displays, etc. This is the only picture we took inside the museum. Would you order a beer from that bartender? 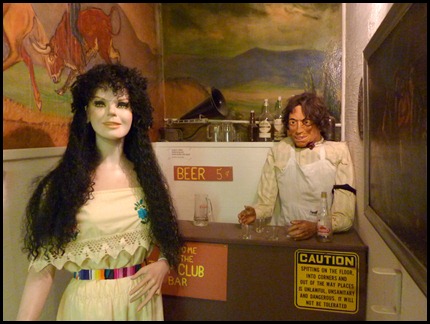 There is also a room honoring Ralph Edwards, host of the radio and TV show “Truth or Consequences”, who challenged a town to change it’s name to Truth or Consequences in 1950, in honor of the tenth anniversary of the show. The town of Hot Springs, NM voted to change it’s name, and Ralph Edwards brought his show to town the first weekend in May, 1950 for the first T or C Fiesta. He returned every year for 50 years, long after the show went off the air.
We aren’t big museum people, and had we paid $6 each to get in would have been disappointed, but for free it was an hour well spent.
After all that culture we were ready for something different, so we went to the park to watch the Junk Boat race. 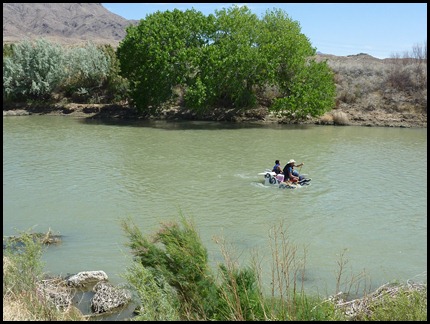 Here are the rules: “Junk boats must be made out of homemade or recycled materials -- pipes, styrofoam, beer cans, etc...but absolutely no boat parts, screws, or nails!”
The winners. They were way ahead of the rest of the bunch. 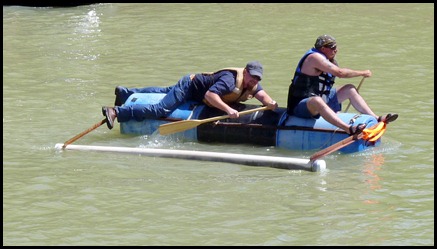 It was in the 90’s, and although they were going downstream there was a strong headwind, so none of them appeared to be having much fun. 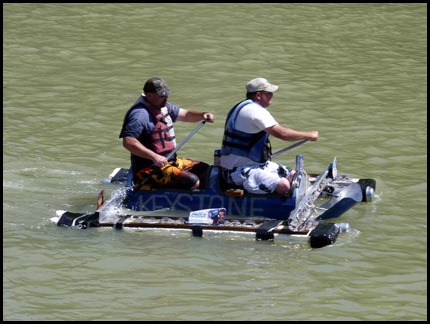 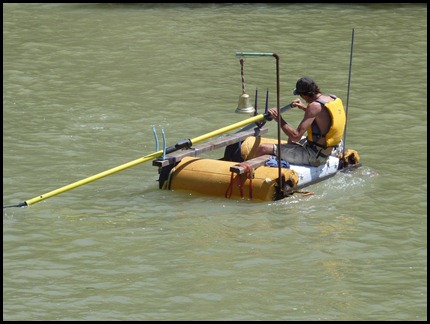 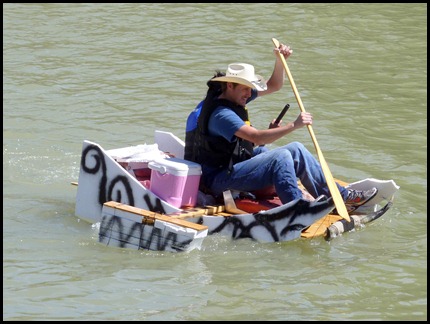 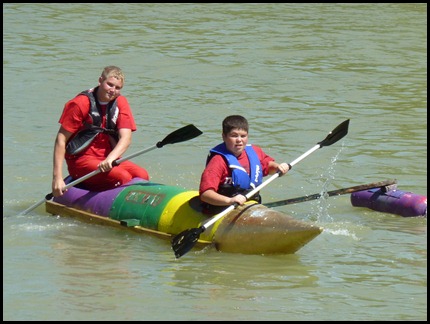 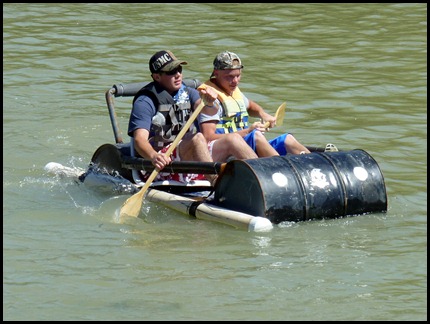 We never did hear what the prizes were, but I have a feeling they weren’t much.
Although T or C is supposed to be a big retirement and arts community, it is a sad looking town, and one we can’t imagine living in. Maybe we’re missing something, but we’ve yet to figure it out.
Posted by Jim and Gayle at 4:56 PM