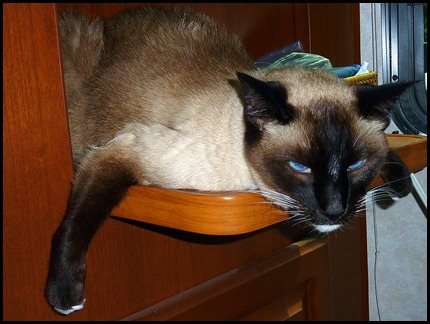 The good thing about staying in one place for awhile is it gives us a chance to catch up on all those RV chores we tend to put off while we are busy traveling, sightseeing, hiking, etc. While Jim was inspecting the roof a few weeks ago, he noticed the plastic skylight over the shower was developing some cracks. He’s been putting 303 on it and all the vent covers, but probably not often enough, and the sun just deteriorated it over time.

He did a search on the Lazy Daze Yahoo group and found the name of the manufacturer. When he called, they said they were no longer making this part, so a phone call to the Lazy Daze factory was in order. For those of you who don’t own a Lazy Daze, it is not a quick process to get any parts from them. There is no internet ordering and they don’t accept credit cards. This means you call, find out how much the part and shipping will cost, and send them a check. When they receive it they will send out your order. Not a problem this time, since we were going to be here awhile.

The first surprise came when they quoted a price of $45 for the skylight and $45 shipping. Must be a mistake, right? Nope, that is the shipping cost. So Jim went ahead and sent a check anyway, since they only had a few left. Jim asked if they knew this was no longer being made, which they did, and told him they would have to fabricate something else in the future.

It arrived last week and he decided to paint it first with plastic paint to hopefully give it a little more protection from the sun. 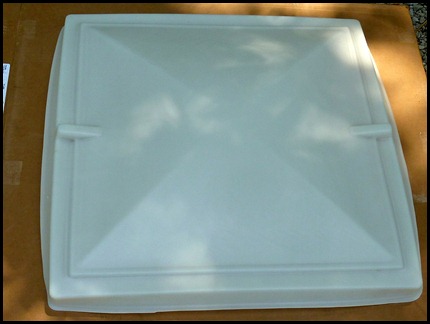 Jim was able to remove the old one with no problem, but the new one didn’t have any predrilled holes, and he had a heck of a time figuring a way to measure for the new holes.The new one also wasn’t cut quite the same, and he needed more hands to help push this in place to screw it down. Since I don’t get on the roof, I was no help, and he really didn’t want to ask anyone for help. That was last Saturday, and he gave up, figuring we were just going to eat the $90, or wait until we got back to California next year and let the factory put it on.

On Monday he called Lazy Daze again to get some helpful hints on how to install the thing. They weren’t very helpful, but did say it was not real easy. So yesterday he was back at it, and this time managed to get the holes right and get it screwed in place. Luckily nobody wants to camp near the hosts, so no one but me had to listen to all the obscenities coming from our roof! 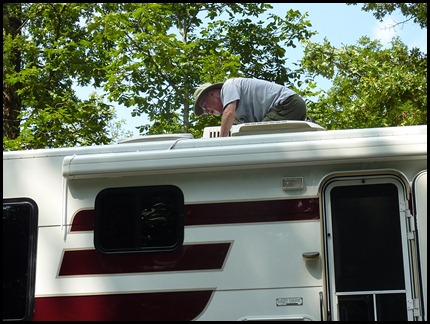 One other thing I did this week was put up a new storage container in the freezer, thanks to our friends Don and Dorothy who posted about it on their RV blog KoKo. If you look at their picture it is the container with the ball in it that I installed using Dual Lock. We’ll see how the adhesive holds up in the freezer. it will be nice to have a bit more useful storage in the door, something that should have come with it in the first place.

Next week’s project is changing the oil and possibly the spark plug in the generator. Are we having fun yet?