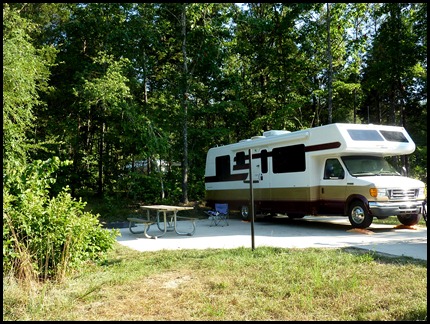 We didn’t go too far Monday, about 75 miles north, to Johnson’s Shut-Ins State Park. This is a beautiful park that was destroyed in 1995 after 1.3 billion gallons of water rushed through it from a breach in the Taum Sauk Reservoir. The entire park was rebuilt from the ground up, so everything is relatively new. There is a very nice visitor center, and the campsites all have paved pads, which feels rather sterile after two months on gravel and dirt. Being as hot as it is we were surprised to find the campground so crowded, and got one of only two sites that weren’t reserved. We have no TV and no Verizon signal but there is WiFi at the campground store.

The big attraction here is the East Fork of the Black River. 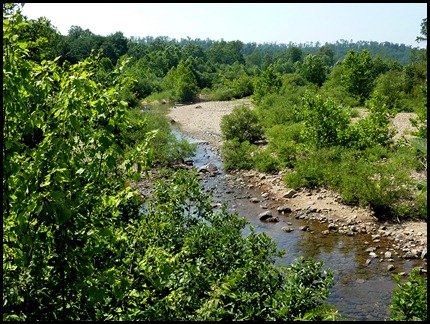 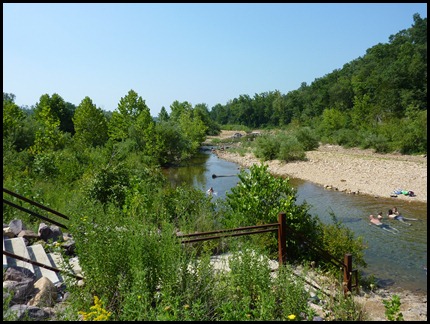 And the shut-ins, narrow, rocky areas where you can get in the water and play around the pools, chutes, and small waterfalls. A half mile boardwalk takes you there. We spent about an hour there Monday night enjoying the water and climbing around on the rocks, since it was still around 90 degrees at 7pm. 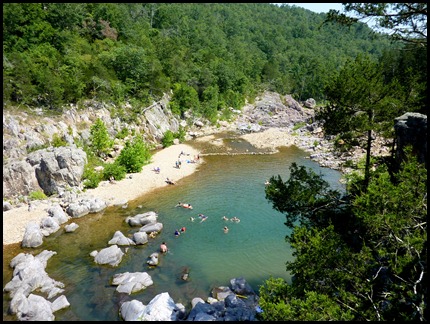 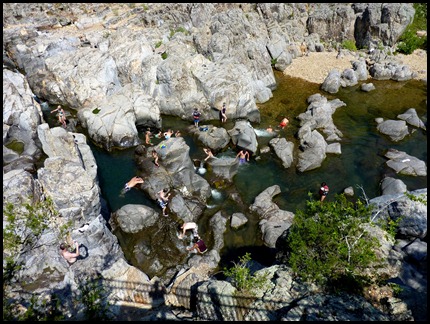 Tuesday we drove to two other nearby state parks, first stop being Taum Sauk Mountain. This is home to the highest point in Missouri at 1772 ft. Not very high as mountains go, but there was a nice breeze blowing. We took the paved trail to the highest point, and a bench and a marker. No view except trees. 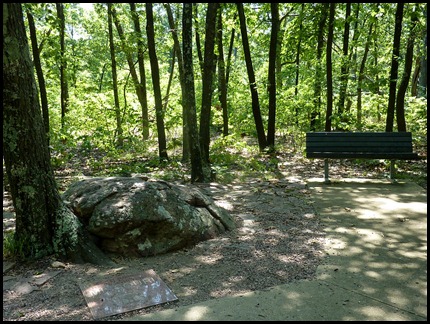 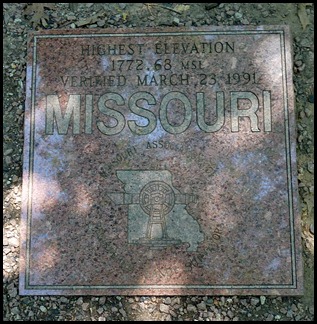 We continued on a three mile loop trail that goes to Mina Sauk Falls, the tallest waterfalls in the state, which was dry since there hasn’t been much rain recently. It was 92 when we started, but the trail was mostly shaded. 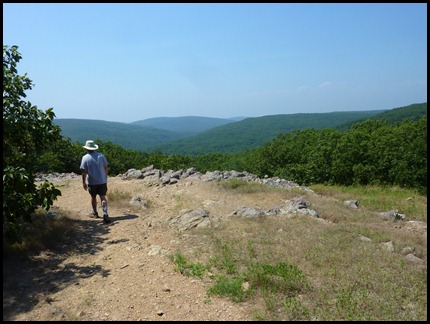 Had there been recent rains, this would be the falls. Instead it was just rocks. It was a rugged hike and would have been better had it been a bit cooler, but we survived. 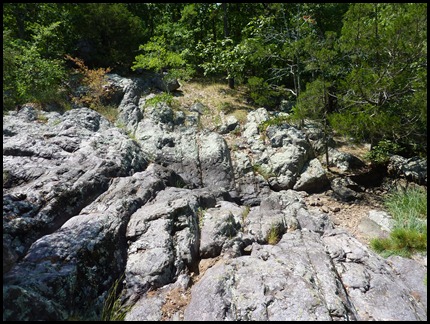 After a picnic lunch we continued on to Elephant Rocks State Park. This is a day use only park, and is famous for their elephant-sized red granite boulders. 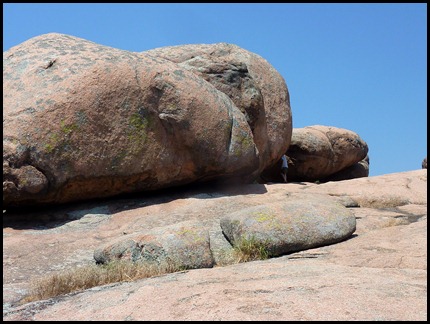 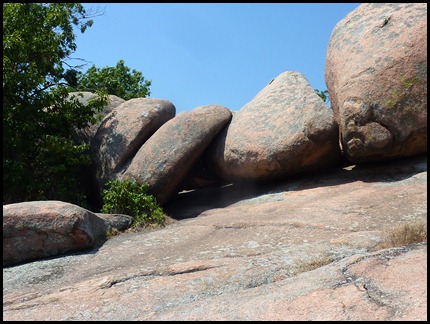 There is a shaded, paved one mile trail through the boulders, and as it was 102 degrees we didn’t spend much time out of the shade.

Jim made it through Fat Man’s Alley without too much trouble. 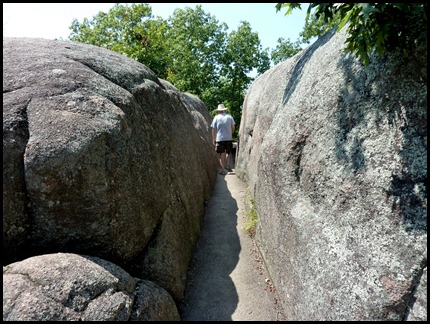 We saw some interesting tree growth around the rocks. 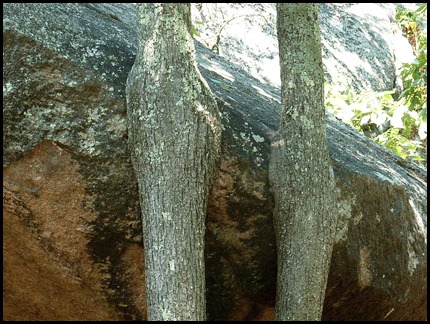 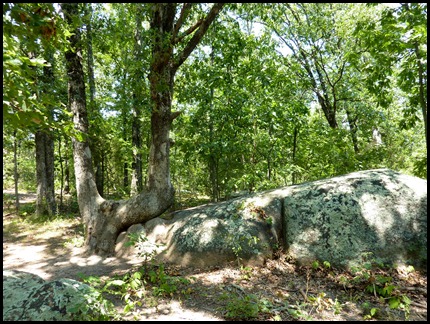 Just outside the park is the oldest  commercial granite quarry in the state, so there is a lot of evidence of the mining industry still in the park. 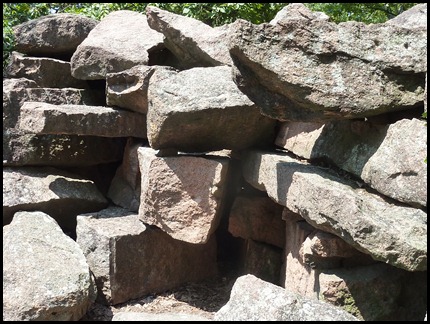 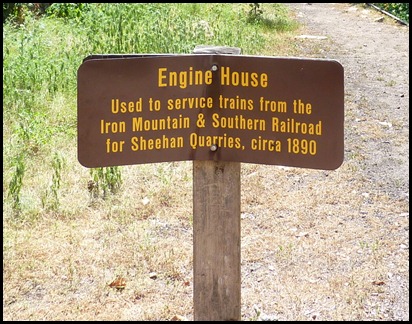 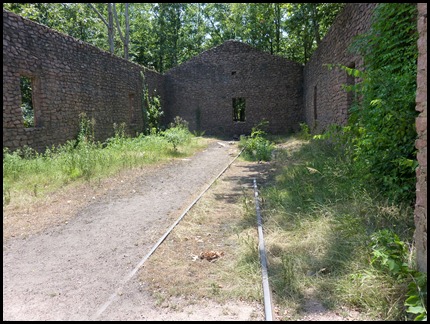 When the  miners became master stone cutters they carved their names into the rocks. There were lots of names and dates from the late 1800’s. 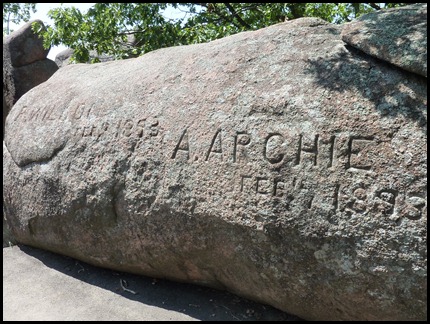 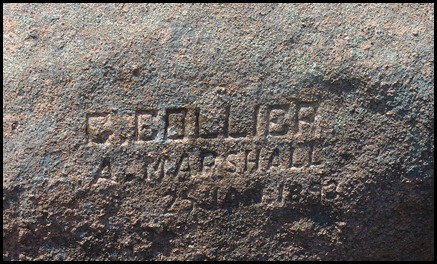 It was nice getting back to the campground last night and knowing we weren’t the ones responsible for the other campers. We even took early showers and relaxed and watched a movie, the first time in two months we’ve been able to do that. Nice to be retired again.

Today we moved on to Babler State Park, just west of St. Louis, where we plan to spend a week playing tourists. If only it would cool off a bit.