Another Town, Another Dentist 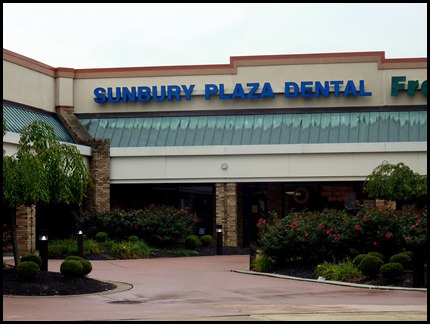 It was a rainy day and we had nothing better to do, so Jim decided to break off a portion of a crown while brushing his teeth this morning. It wouldn’t have been so bad, but this is one he had replaced in Palm Desert, CA last November.

He found a dentist about 15 miles from the state park who was able to get him in at noon. He repaired the crown temporarily to the tune of almost $300, but said he needs to have it replaced soon. Jim called and got an appointment to see our old dentist in Pensacola when we are there in October to get a new one made, which will probably be close to another thousand bucks. I was really hoping we were going to get through 2011 without any more big dental bills, but that was wishful thinking.

While Jim was on the phone this morning we got a message from Kelly, our former next door neighbor in Pensacola who is a pilot for Southwest. He had a layover in Columbus until three today and saw that we were in the neighborhood. Too bad it didn’t work out to meet him for lunch since it is his birthday today.

Since the day was already ruined, after we left the dentist Jim decided he would get a shingles vaccination and we would both get flu shots at a nearby Walgreens. It was all free since we’ve met our out of pocket for the year, and Walgreen’s automatically files the insurance.Told you we shouldn’t have seen Contagion!

We ended up not eating lunch until 3:30, so we are saving pizza for tomorrow night. The weather is supposed to be better and we plan to go for a bike ride, barring any unforeseen dental emergencies.