It’s probably been close to three months since a cord broke on one of the shades in our bedroom. I managed to tie a knot in the broken cord, so the shade would still go up and down most of the way. We decided to try to restring it ourselves, and I even ordered some cord from FixMyBlinds.com. We have been busy working and doing other things since then, the shade was still functioning, and we were basically burying our heads in the sand trying to avoid actually doing the job. Or like Sophie, burying our heads in a drink holder. 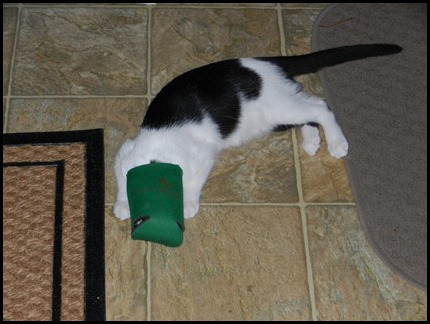 The other day Jim noticed that the knot I tied was enlarging the hole in the blind, so we decided it was time to get to work. One reason we attempted to tackle the job ourselves is that another Lazy Daze owner, Ted, was kind enough to post excellent instructions on his blog, complete with photos. All Lazy Daze come with pleated night shades, not the day-night shades that seem to be common in most RVs. 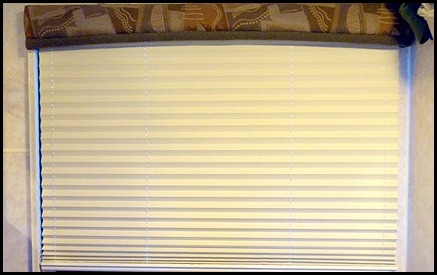 We decided to see if we could remove the shade without removing the valance. So far so good. Taking the shade apart was fairly easy. And thanks to wxToad’s excellent instructions, the restringing part was not as hard as we thought it would be. We misread the last step a bit so we ended up with it being a little too loose, but after almost three hours of work we decided to adjust it another day.

We had the most trouble trying to remount the shade. Jim decided we did need to take down the valance after all. 5 screws later and the valance was just as secure on the wall as it was before removing the screws. We were unable to locate any other screws or brackets, so we gave up and finally got the holes lined up to remount the shade with the valance in place. That was actually the most difficult part of the job.

Now it was time to indulge ourselves in a beer and a nice glass of box wine. I drank the wine, Elvis got the box. 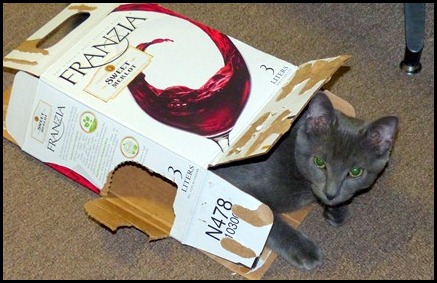