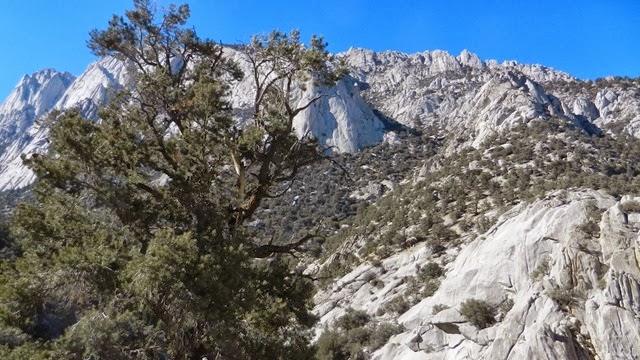 Wednesday was Jim’s birthday, and he wanted to go back to the Alabama Hills Café for whole wheat pancakes. They were even better the second time around, although our service was not so good this time.

We had invited Charlie and Marti to go on a hike that afternoon, so we drove about 5 miles to Tuttle Creek Canyon and the trail that leads to The Ashram. We got a brochure and map at the Chamber of Commerce in Lone Pine, which recommended a high clearance vehicle to get to the trail. We did fine for awhile, but the rutted, rocky dirt road began climbing steeply. Jim hesitated because I questioned whether we should continue in the Subaru, then he kept losing traction as he tried to go up. Finally he backed up into a turn around and we just parked there. Hiking up the road added a little more distance to our hike, but it was a short trail anyway, so I was happy to be out of the car and walking. 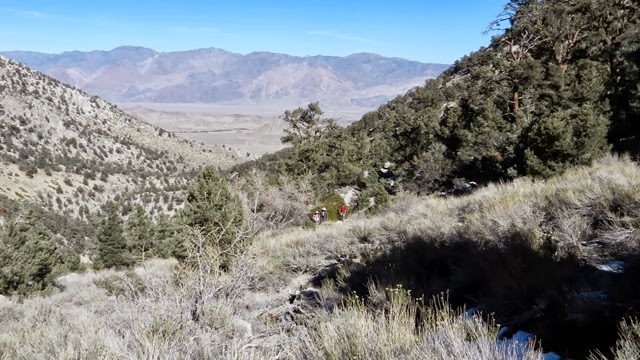 Our goal was to get to this stone house, which began construction in 1930 by Franklin and Sharifa Wolff. Due to their beliefs in Eastern Indian mysticism and philosophy, the Wolffs wanted to build a spiritual center near the highest point in the country. Unable to lease land from the Forest Service near Mt. Whitney, they settled for the next best thing, a lovely spot on a cliff overlooking Tuttle Creek Canyon and the Owen’s Valley. You have to look hard to see the house on the other side of the creek. Our hiking group was a bit concerned that we had that much farther to go at this point. 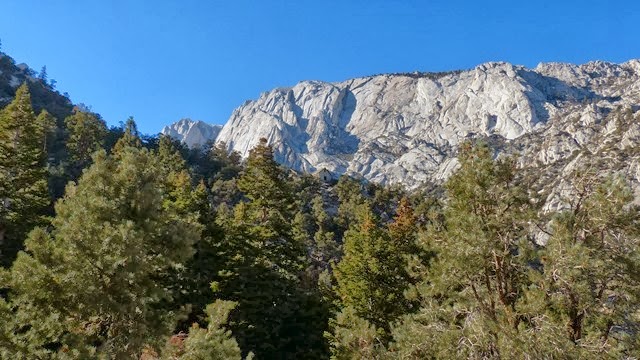 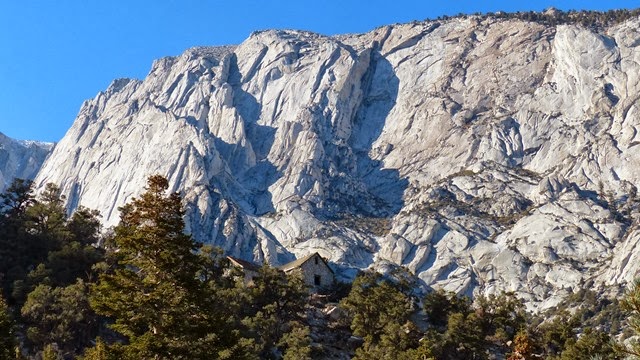 After some more climbing we finally reached an easy creek crossing, and shortly arrived at the ashram. Sadly it was not finished after 20 years of summer work, never getting windows or doors put in. It’s a very interesting story, which you can read more about here if interested.

The house was constructed in the form of a balanced cross to symbolize the principle of equilibrium. It must have been quite a feat just to get supplies up to the building site. The trail we hiked on was a road at one time, but is now just a steep, narrow trail on a ridge over the canyon.

We didn’t get good pictures because of the light, so you’ll just have to make the hike up if you want to get a closer look. It truly is in a beautiful setting and worth the hike. 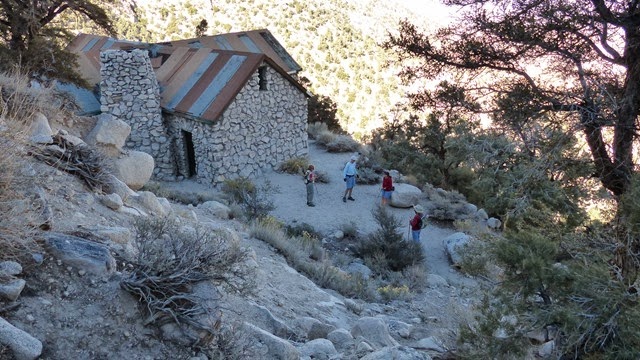 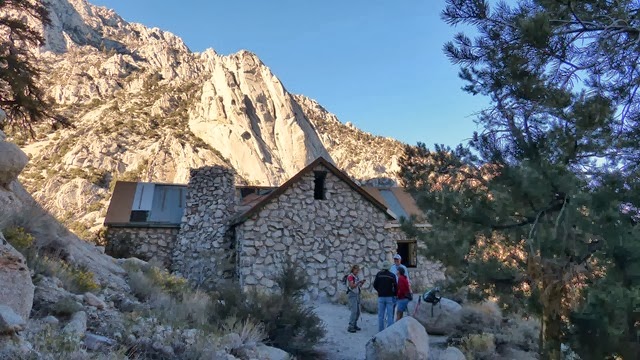 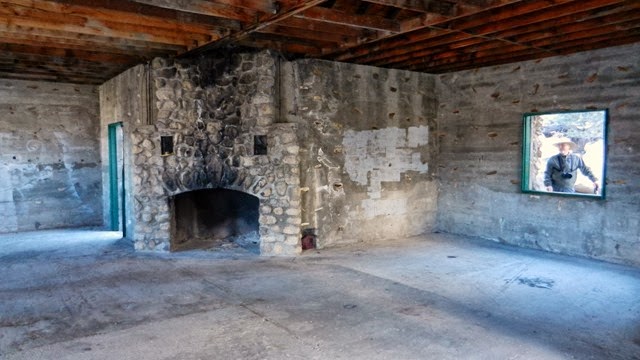 Charlie and Marti left for Bishop yesterday, but we are so glad they hunted us down in the Alabama Hills. They’re also planning to go to Quartzsite in January so we hope to see them there.

Jim and I wanted to take one last hike in the high country at 10,000’, so we decided to make the 20 mile drive up Horseshoe Meadows Road and hike part of the Cottonwood Pass trail. The road up to the meadows is steep, full of switchbacks, and is one lane for a short while, but like Whitney Portal Rd it is also paved. We had to stop and take a few photos from the overlooks. 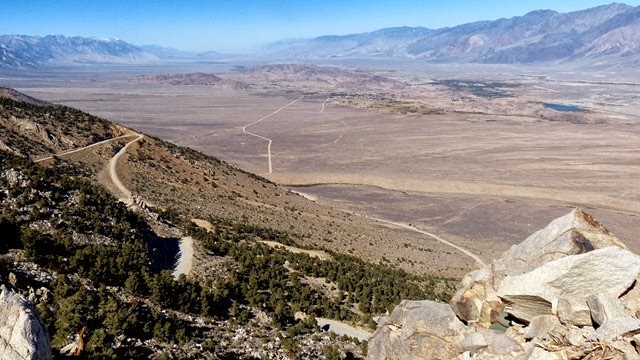 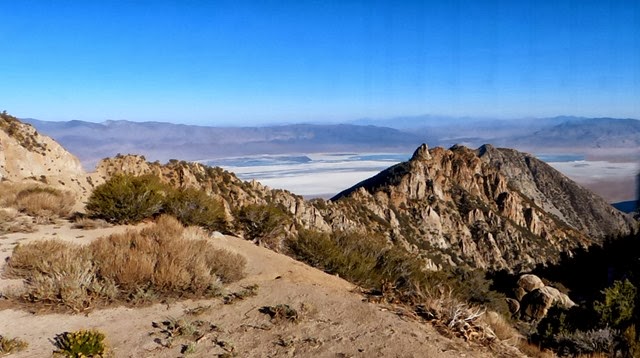 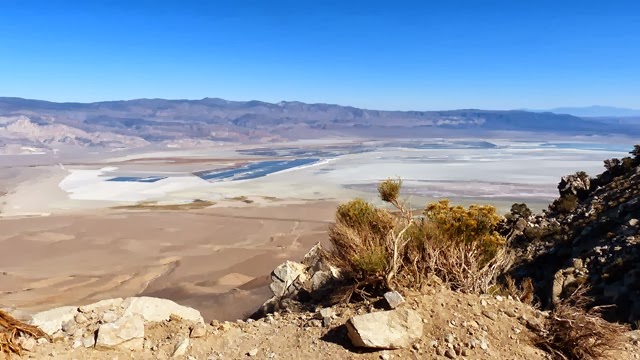 We were the only car at the trailhead parking lot, and it was 51 degrees when we started our hike. We walked 2.5 fairly easy miles before the trail really started to climb, so we decided to head back as it was getting colder, down to 46 by the time we got back to the car at 4 o’clock.

The first mile or so was like walking on a wide, flat boulevard. We saw no one else the entire time. Shouldn’t we have seen a bear or something? 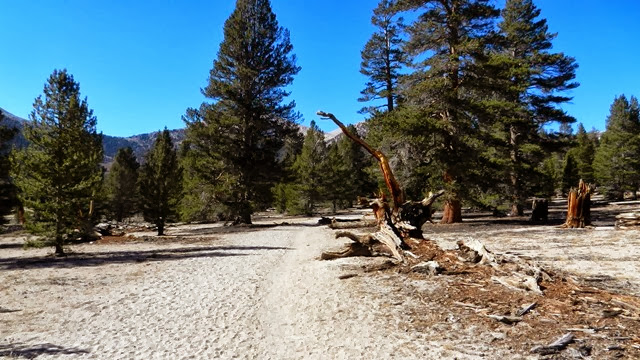 There was a little bit of snow left in places, but we were surprised when we had to cross this icy creek. 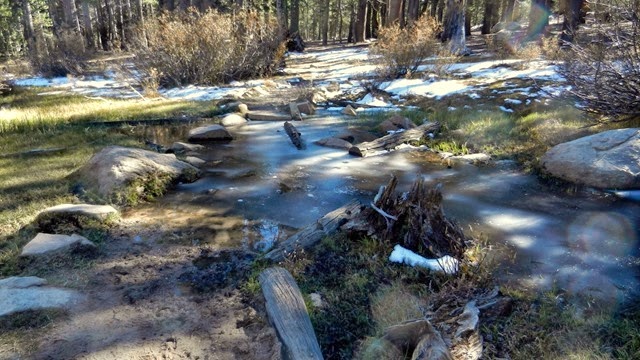 Dead trees made for some interesting natural artwork. 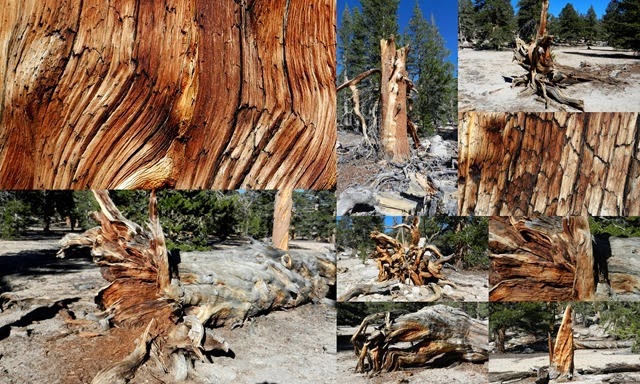 It was a nice ending to our almost three month stay in the Eastern Sierra. We will definitely come back.