Last Days in Ashland and a Move to Diamond Lake

It got up to 96 our last couple days in Ashland, a bit too hot for us to hang out and enjoy our lovely view of Emigrant Lake, so we headed for the mountain. 7,533’ Mt. Ashland, that is, the highest point in the Siskiyou Mountain Range of southern Oregon. Primarily a ski resort in the winter, during the summer it’s a great place to get away from the heat.

The summit of Mt. Ashland as seen from the trail, site of a radome weather radar station. 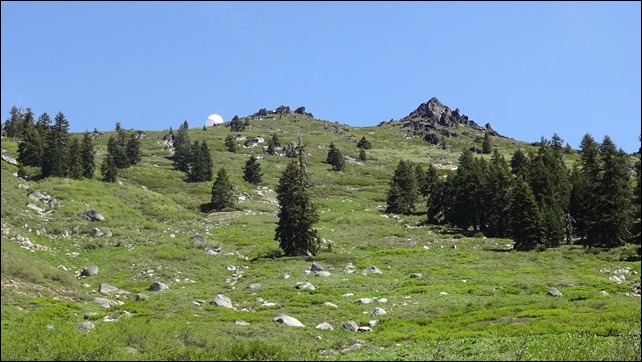 It was 85 when we left Ashland Sunday morning, but 20 miles and many feet higher it had dropped to 70 at the trailhead. We parked in a pull-off 7.2 miles up Mt. Ashland Rd. at a crossing of the Pacific Crest Trail and hiked about 3.5 miles to Grouse Gap, where we turned back.

Over the years we’ve hiked small portions of the PCT in California, Oregon and Washington, but will never come close to doing the entire 2,650 miles of it. 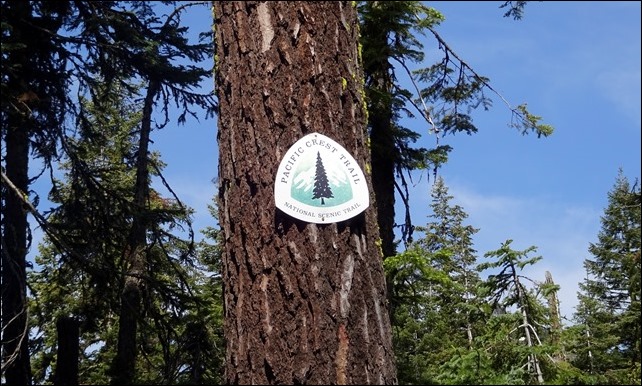 The first part of the trail was mostly in the forest, but then it opened up to meadows full of future wildflowers with views of the mountains. 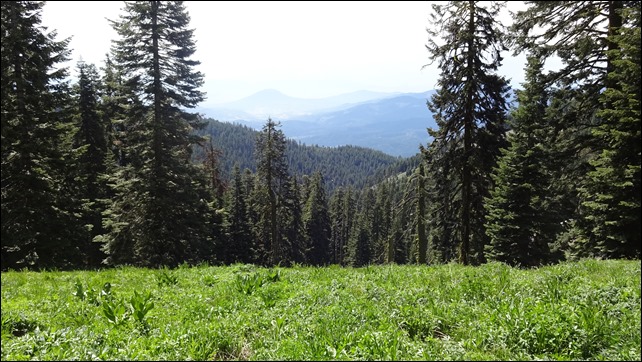 This is a fairly easy hike without too much elevation change. 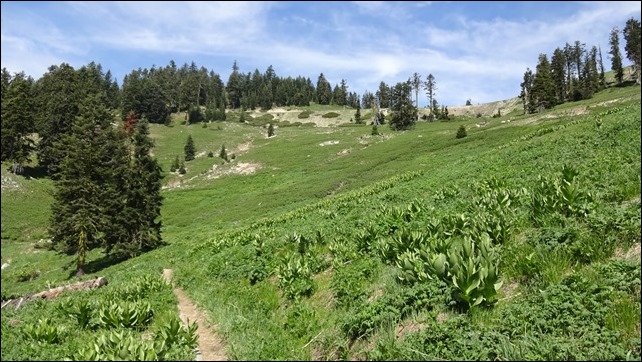 There were many small stream crossings. 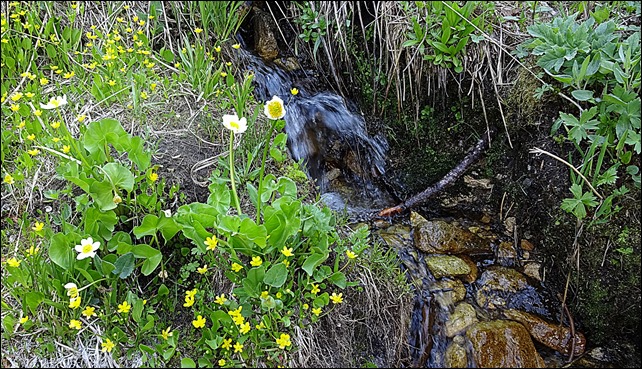 It’s hard to tell, but the white on the top of this hill is actually snow. 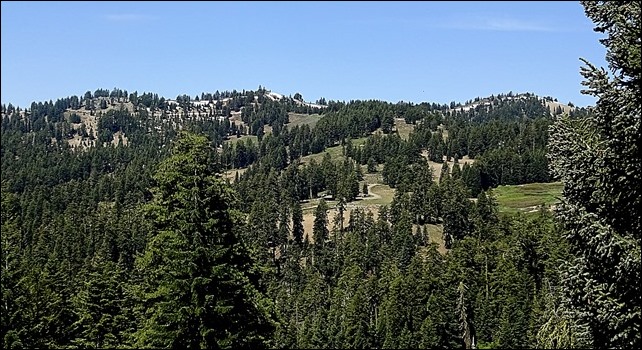 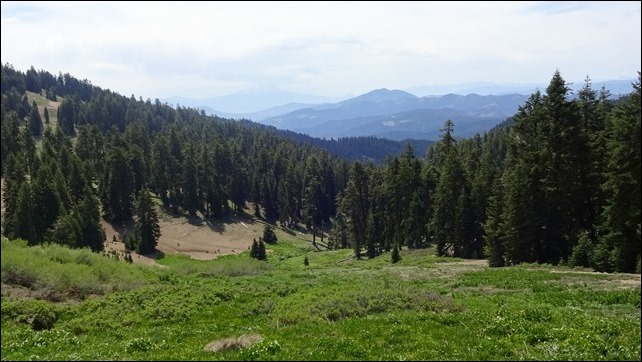 At our turn around point we got one last view of majestic Mt. Shasta. It seems to be following us everywhere we go lately. 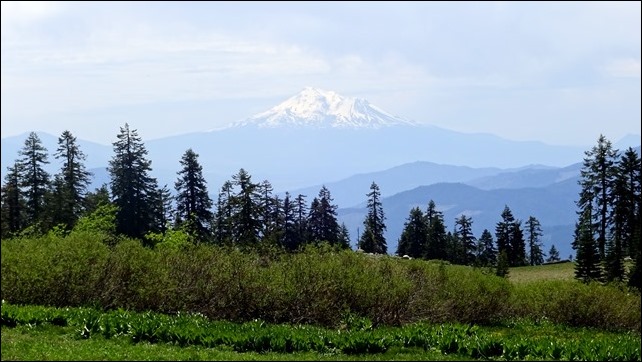 On Monday morning we joined the pickleball players in Lithia park for a couple more hours of fun. They are a really nice group of people and many of them are fairly new to pickleball, as we are, so we fit in well and had some good games. That afternoon Jim manned the laundromat while I got a haircut, then we picked up a few groceries. Anything to get away from the constant drone of our air conditioner running non-stop in the Lazy Daze and barely keeping it at 80. It finally cooled off enough by 8 pm that we were able to sit outside for awhile. We had a good time in Ashland, despite the heat.

Yesterday we were out by 10, taking a beautiful route along the Rogue River to Diamond Lake, just north of Crater Lake. We visited Crater Lake back in 2009 and this seemed like a good stopping point on our way to Bend. Our friend Jeanne is camped at a Sno Park near Chemult, and we considered joining her, but I wanted to ride the bike trail around Diamond Lake, something we didn’t do when we were here before, so we were driving by anyway and stopped to check out the campground. There aren’t many people here and there were lots of lake front sites available, so we ended up staying. Unfortunately the mosquitoes are out in force.

Lake view property again, our third in a row. Many of the sites are short or very unlevel, so we ended up in a double site for $27/night, but we only paid $13.50 with Jim’s senior pass. The single sites are $22, or $11. No hookups but there is water, decent showers, and a dump station. 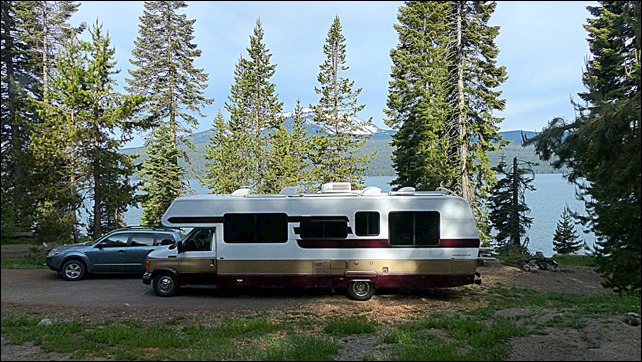 Our view of the lake and Mt. Bailey would be so much better if they just cut down a few trees 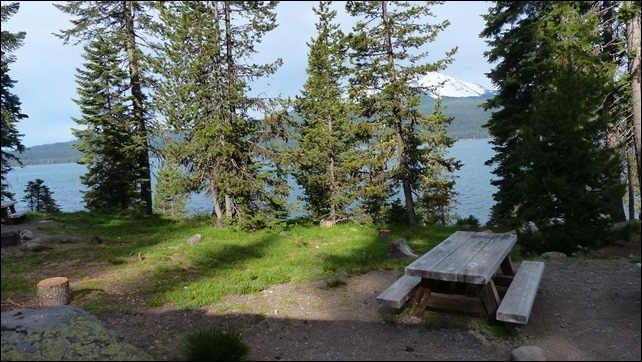 We did get better views of the surrounding mountains from the 11.5 mile Dellenbeck bike trail that circles Diamond Lake. 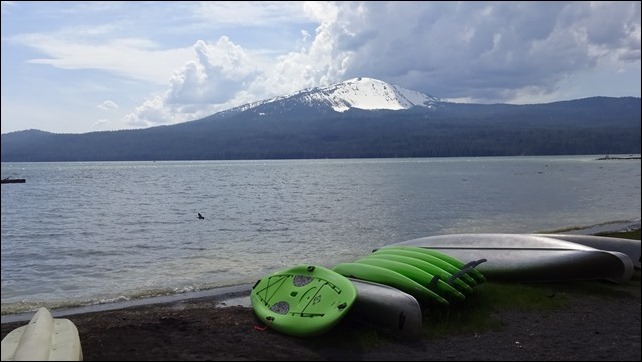 It’s a nice trail through the woods, with lots of ups and downs, but we couldn’t stop for too long. or the mosquitoes would catch us. 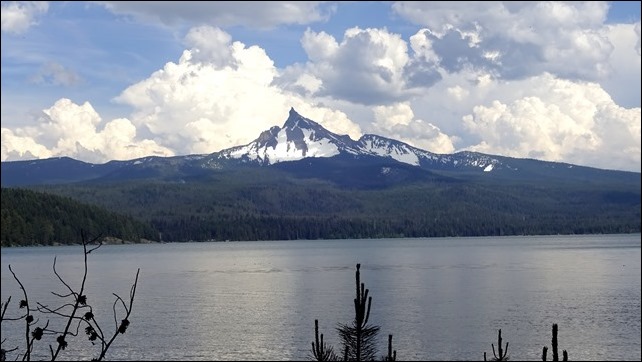 Today we’re meeting Jeanne at Crater Lake for a little hike. The high is only supposed to be in the upper 60s today, quite a nice change.