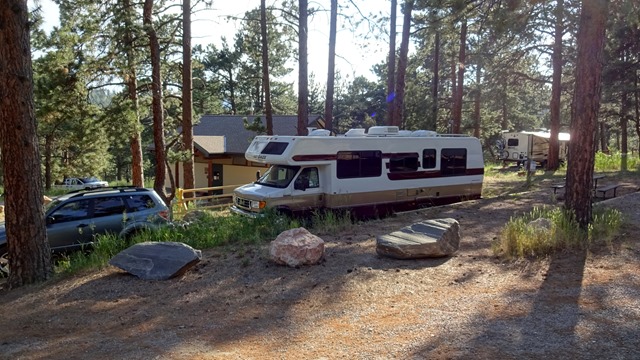 On Wednesday we headed 20 miles west of Denver, climbing up to Chief Hosa Campground near Evergreen, CO, at an elevation of 7,700’. Billed as “America’s first motor-camping area” and opened in 1918, the campground is small and rustic, with a mix of RV and tent sites in the pine trees, too close to I-70.

We were lucky to get the only site available for two nights, and it had full hookups. We knew we would need to dump before moving on, and they charge $23.00 on top of the nightly rate to use the dump station, but it only costs $2.50 more per night for one of the few full hookup sites. Strange. The park is owned by the city of Denver, and we paid $30/night with a 10% senior discount. Our site was not very level, but we were next to the nice restroom and had lots of space between us and the next site, unlike some of the others. 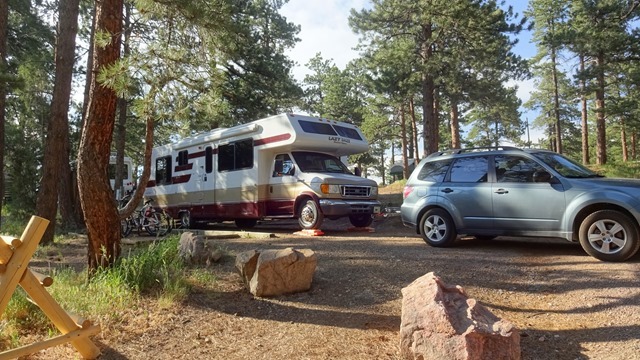 It was better than the upper 90s in the Denver area, but still in the mid 80s, so Jim did some bike maintenance and we took a little walk across I-70 to Genesee Park and the bison viewing area. Who knew that the city of Denver owns a herd of bison?

Unfortunately they were not around both times we went looking for them. 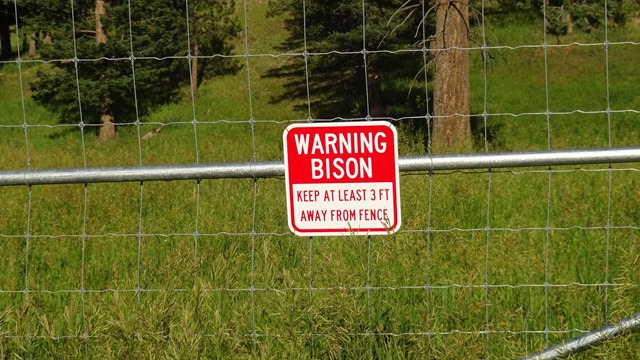 But it was a pretty view. 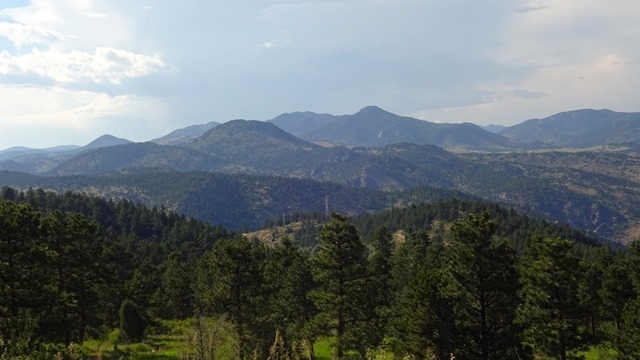 Chief Hosa Lodge is across from the campground. Also built in 1918, it can be rented for private events. 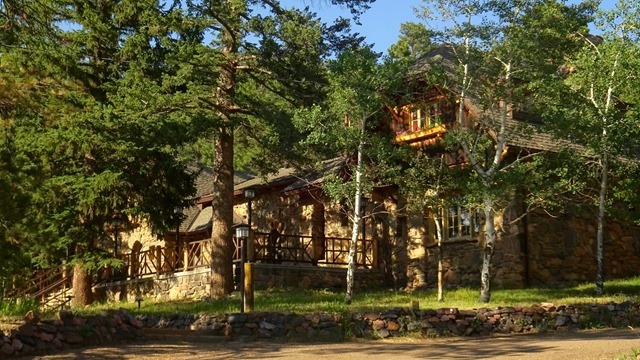 Pleasant scenery just past the campground. 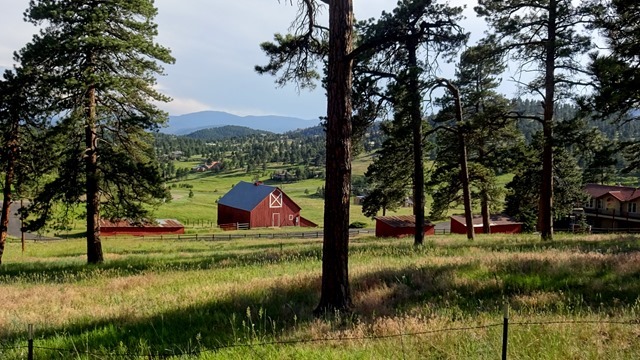 Thursday was to be another day of highs near 100 in Denver, so Casey and Erin drove up from Littleton to take us on a hike up to St. Mary’s glacier, about 9 miles north of Idaho Springs. Starting at 10,300’, it’s a short but sweet rocky trek of about 3/4 of a mile and 500’ of climbing to get to the lake and the base of the glacier. With the proximity to Denver and the short distance it’s a very popular trail. When we arrived at 10 there were not many cars in the huge parking lot, but it was full by the time we left.

Lots of rocks on the trail. 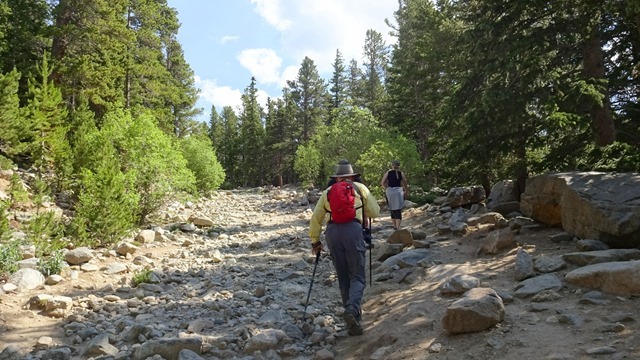 Lots of warnings that nobody heeds. 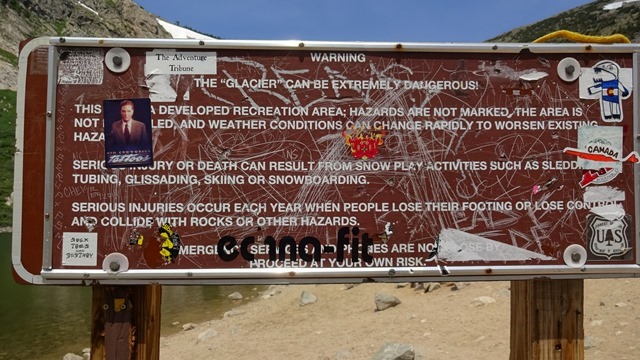 I like the embellishments that have been made to the hiker. 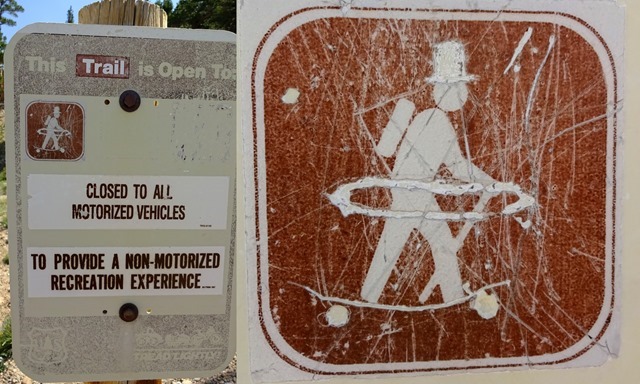 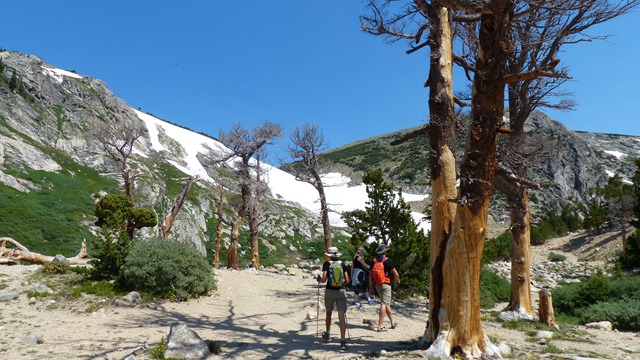 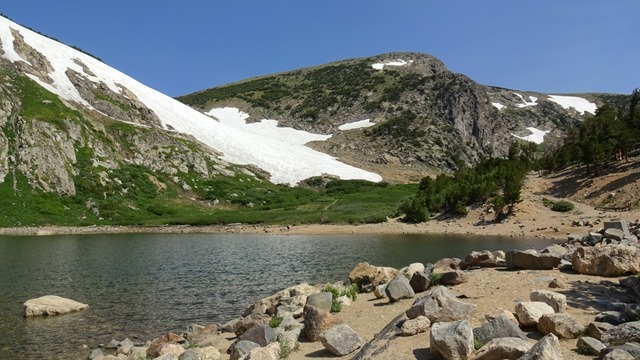 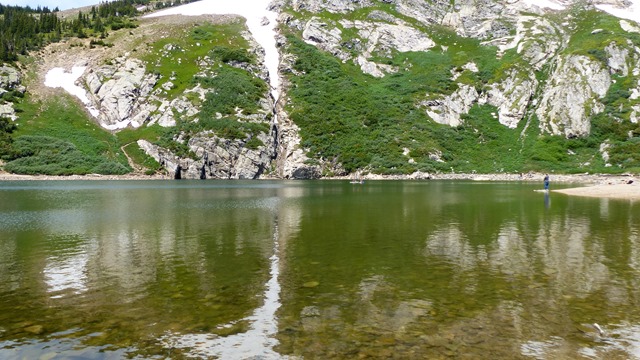 The dog kept running back and forth across the board but the woman managed to keep her balance. You would not want to fall into that ice cold water! 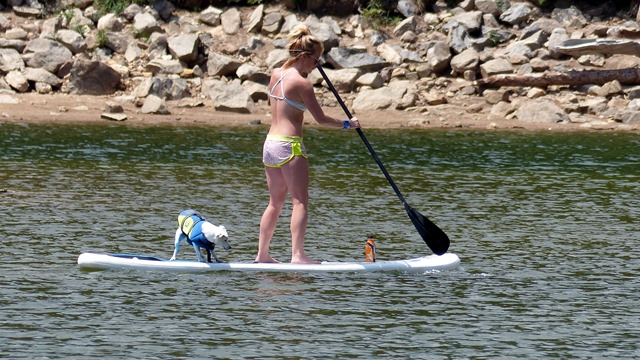 A bridge crossing to get to the glacier. 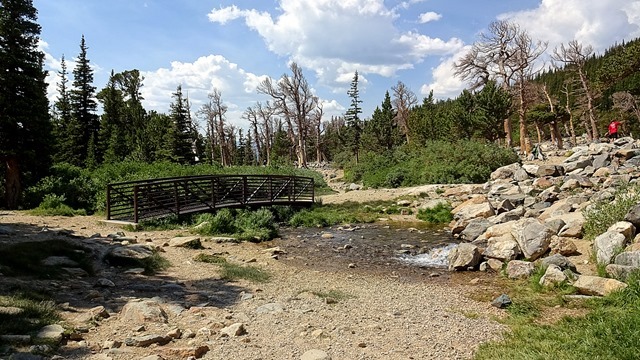 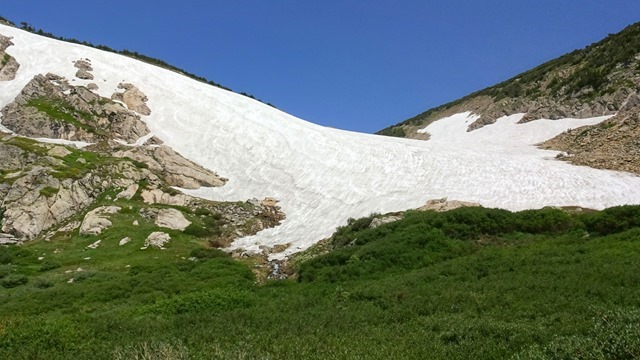 We climbed up the rocky slope to avoid the slippery snow. I tried walking on it but knew it was a recipe for a fall. 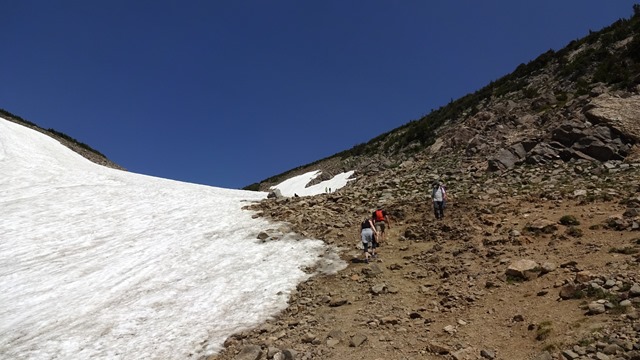 We had great views the higher we went up. 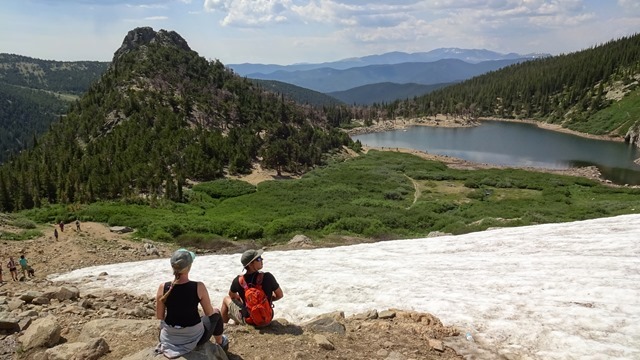 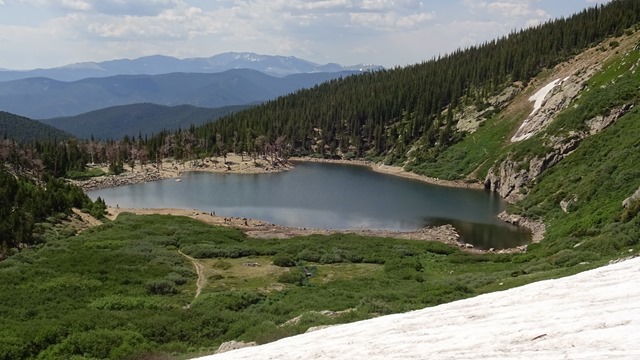 This guy and his dog were running down the slope.

We got to watch a crazy skier go by, and actually saw him later as he was removing his skis. He said this was the 144th month in a row he has skied there, and that it was hard work. 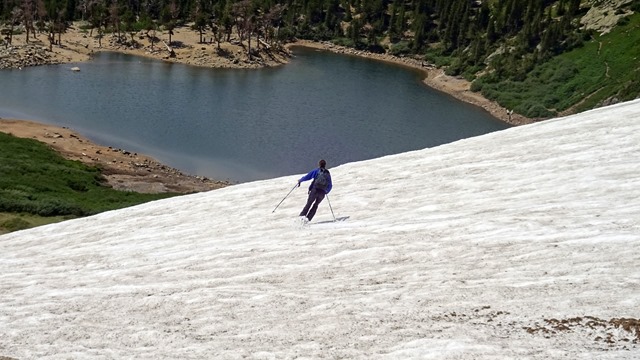 Jim decided he wanted to see if he could climb this hill across the lake that he had been sitting and looking at. 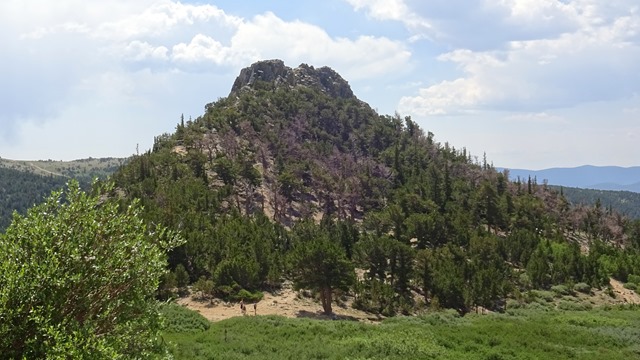 While we decided to walk over to check out the creek that feeds into the lake. 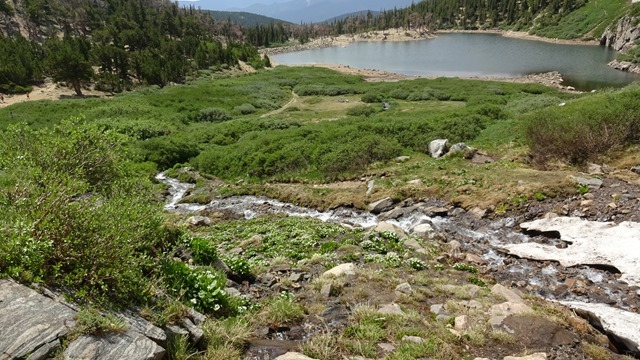 We could just barely see him over there, but his camera could easily see us. 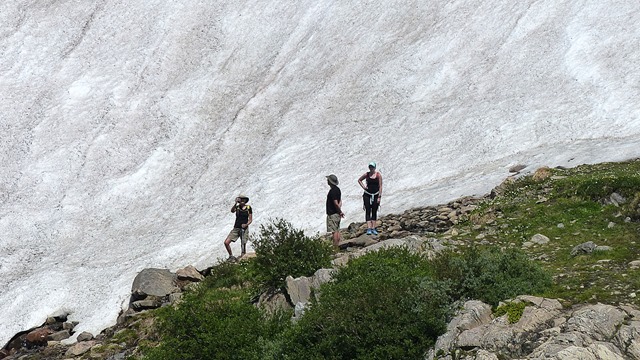 By the time we caught up to Jim he was doing this. 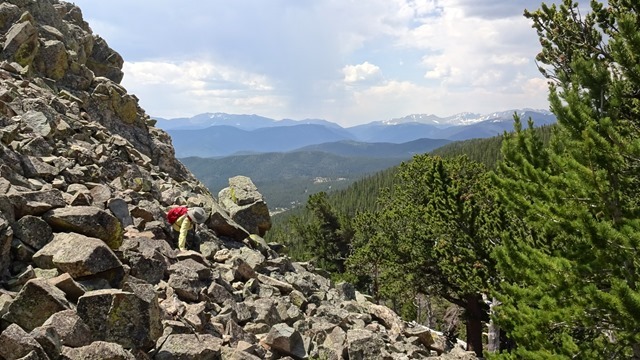 Erin and I decided we’d gone far enough but Jim and Casey wanted to try and get to the top. They gave up when it got really steep and Jim was afraid he might not make it back down. 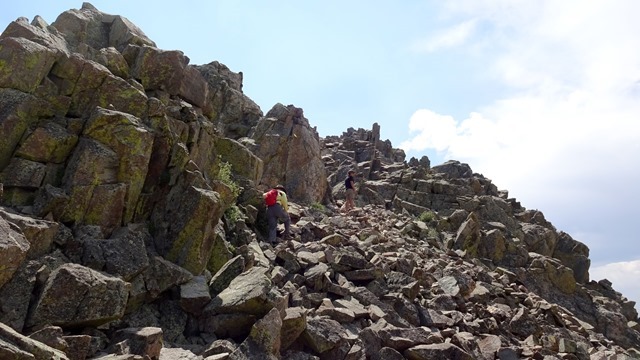 It was lovely up there. 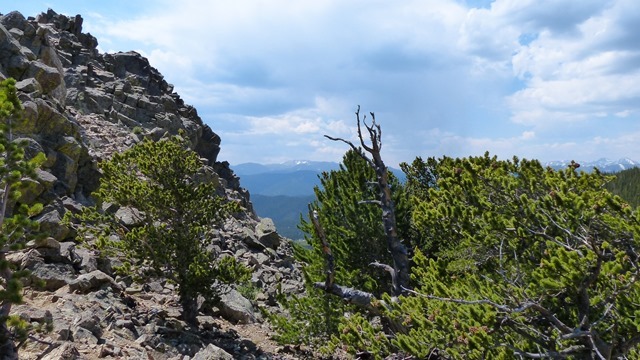 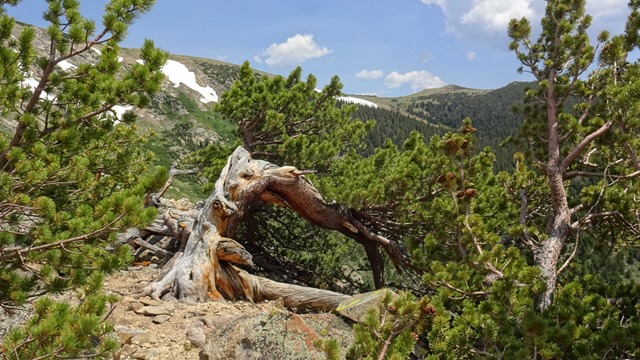 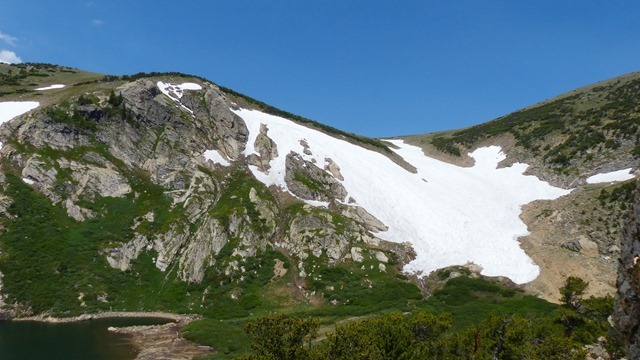 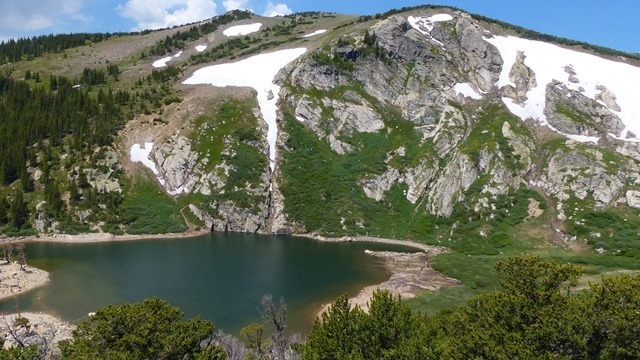 On our way home we stopped in Evergreen for lunch at Beau Thai, were we had an excellent meal and enough to take home for the next day. It was a good day, and we’re glad Casey and Erin could join us.

Next up, a weekend in Estes Park.