We were trying to come up with a place to go last weekend and I wasn’t having any luck getting a cancellation, so it was a pleasant surprise to get an email from our friend Charlotte on Thursday morning saying they would be back in Estes Park on Friday if we would like to come up for the weekend. How could we turn down an invitation like that? Especially after we drove up and saw the driveway we would get to park in. I won’t go into details about the muddy dirt road the GPS took us on, where we had to unhook the car to turn around. Luckily that’s only happened to us a handful of times over the years, but it makes Jim an unhappy camper. 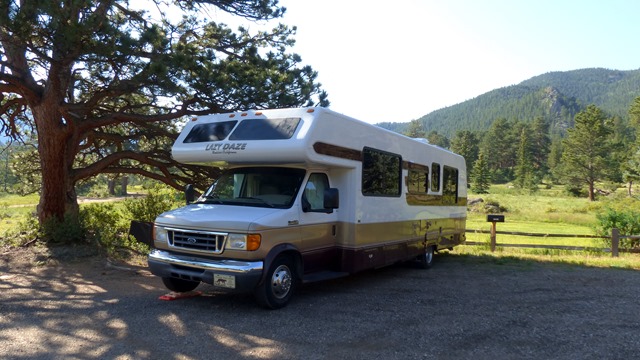 Keith calls this a cabin, but it’s definitely the nicest cabin we’ve ever been in. 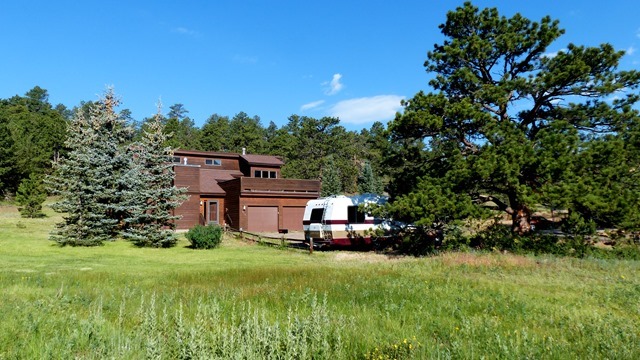 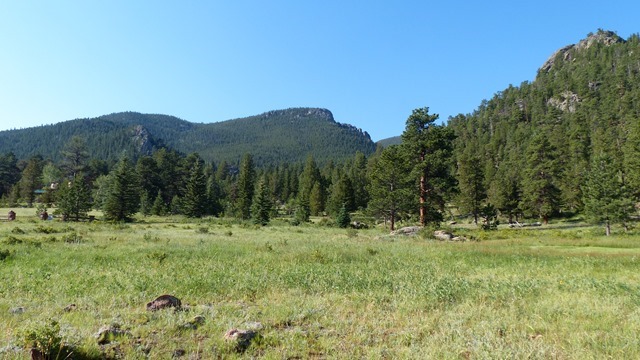 Charlotte texted us one afternoon during a strong thunderstorm to ask if we saw the elk in the yard. There was a herd with several youngsters but by the time Jim got the camera they were moving on. This was taken through our wet window. Jim and Charlotte were coworkers for many years in Pensacola and we had not seen her since 2008. This is Charlotte and Keith at Lumpy Ridge Brewery. Good beer and good company! 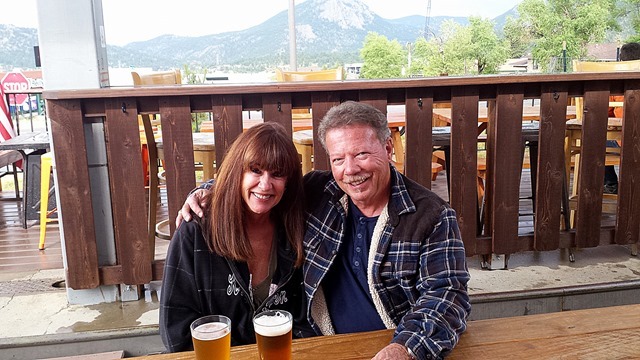 That evening we also went to another bar with a good beer selection, which we forgot the name of, and on Saturday we ate at Poppy’s Pizza and Grill along the river walk, where we had some of the best vegan pizza we’ve ever eaten. They had a huge beer list, too. Keith is a great cook and made us pancakes one morning, and some really good popcorn while we watched a movie one night on their giant 60” TV. Jim is ready to move out of the Lazy Daze for a bigger TV and a recliner.

We wanted to do a hike but didn’t feel like driving into Rocky Mountain National Park, so we found a trail very close to Estes Park. On the way, just in front of the Stanley Hotel, we saw flashing blue lights behind us and realized the cop was pulling us over. Having no idea what he did wrong, the pleasant young woman said our bike rack and bikes were obstructing the license plate, and that Jim failed to signal when he made a turn. After taking his license, registration, and insurance card, she came back and said she was just giving us a warning but we need to come up with a way to make the license plate visible. A male officer then came up to the window to chat and said he was training the woman, but that it was in fact illegal for anything to block the license. Guess we have been lucky in all of the years we’ve carried bikes to never have been pulled over. Not sure what will do to make make things legal.

The hike to Gem Lake is 1.7 miles one way, but we had to park a quarter mile away on the road since the lot was full, adding another half mile. It’s a popular trail since it’s close to town and not all that long, but it was definitely a workout as it climbed steeply, much of the time up giant steps. 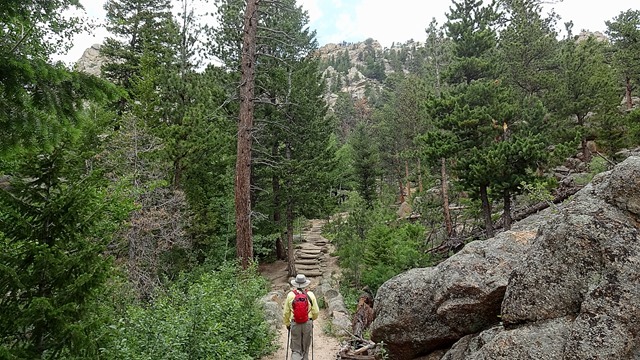 The trail does enter the national park after a half mile or so. 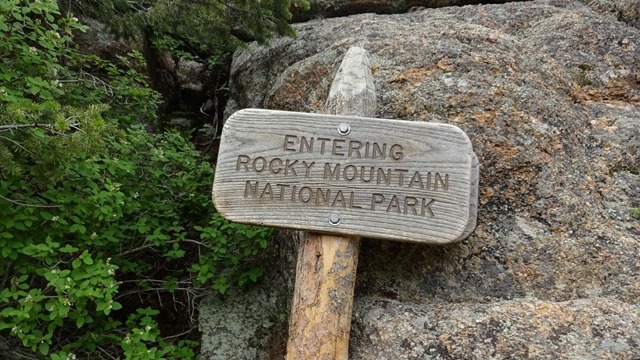 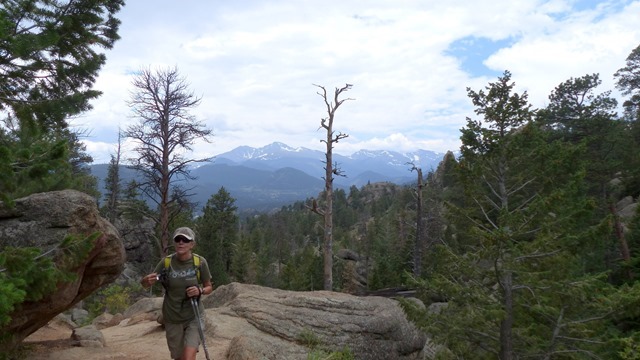 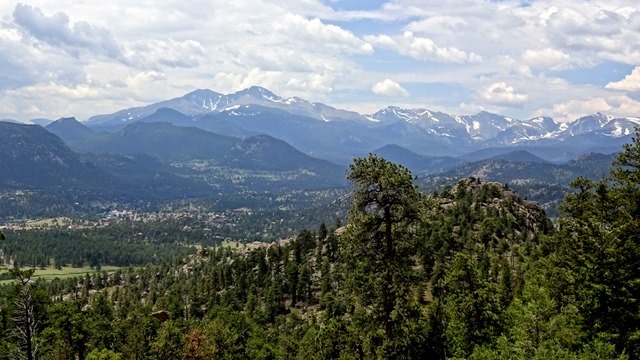 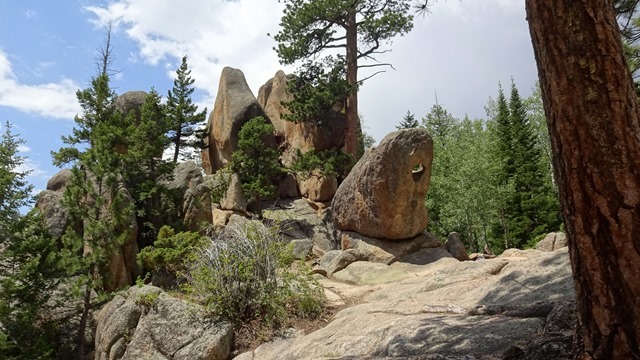 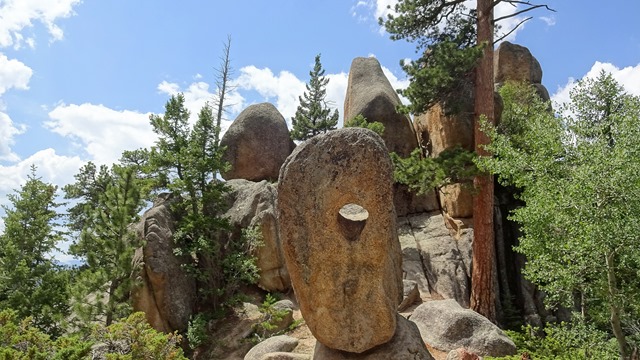 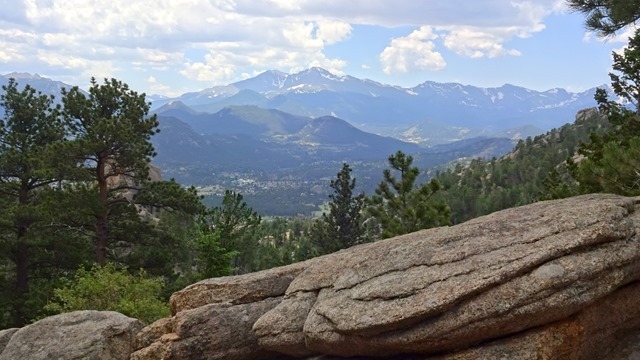 We actually hiked this trail both Saturday and Sunday, as on Saturday we got caught in a thunderstorm and had to turn back about a half mile before the lake. Sunday morning we decided to drive into the park to do a different trail but the line just to get to the entrance booth was so long we turned around and headed back to Gem Lake. To me it was worth the last half mile of steep climbing to get there, with a total elevation gain of 1,000’, but I heard some people complaining that calling it a lake was misleading and they wouldn’t have come had they known it was just a pond.

Lake, pond, whatever, it was in a beautiful setting. 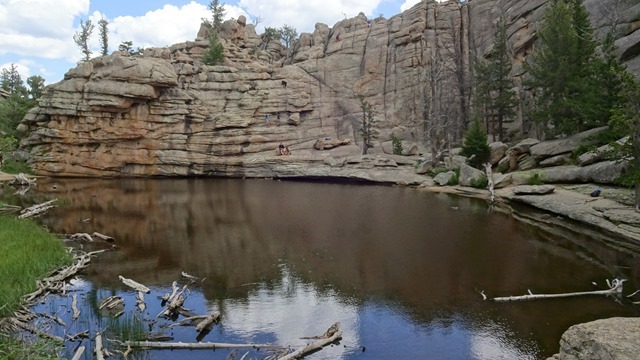 Interestingly, the lake has neither an inlet or outlet stream, but is formed by trapped snowmelt and rainwater that collects in a basin carved out of the base of the granite cliff walls that surround it. 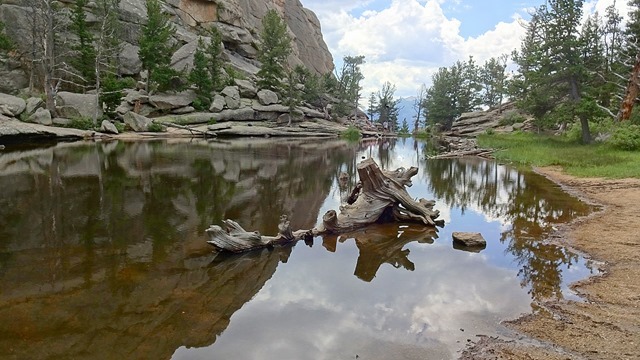 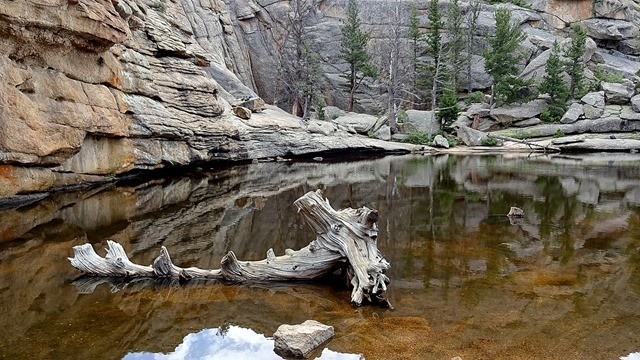 We took the long way back over the Twin Owls trail, which added some distance making it a 4.5 mile hike. We missed seeing anything that looked like owls but there were some interesting rocks. 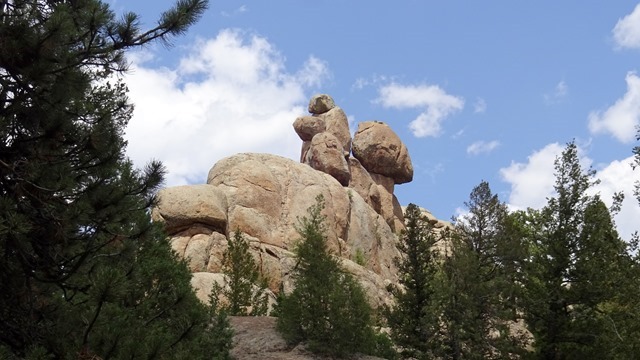 It was a great visit with Charlotte and Keith, but on Monday we left Estes Park and moved on 100 miles to Heaton Bay Campground near Dillon Reservoir. It was our first time driving I-70 through the 11,000’ Eisenhower Tunnel, not something we would want to do on a regular basis. We didn’t hook up the car so Jim didn’t have too much trouble making the climb in the Lazy Daze. We’re now at 9,100’ where it’s much cooler and there is much rain. We stopped to dump and get water at the only game in town, the Farmers Korner Water Treatment Facility about 4 miles away. Expect to wait in line. The campground does have drinking water and vault toilets, $12/night with the senior discount. 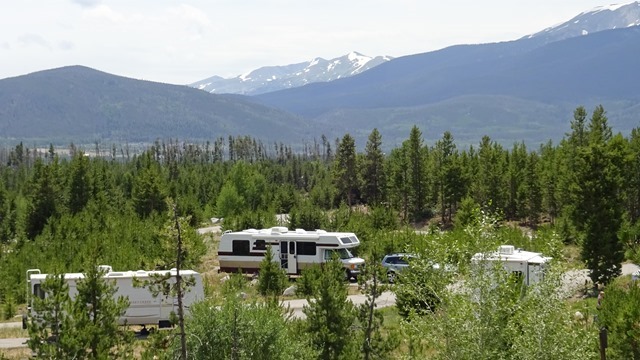 Did a bike ride yesterday over the dam along the Dillon Reservoir Recpath. a very nice trail with lots of ups and downs along the lake. 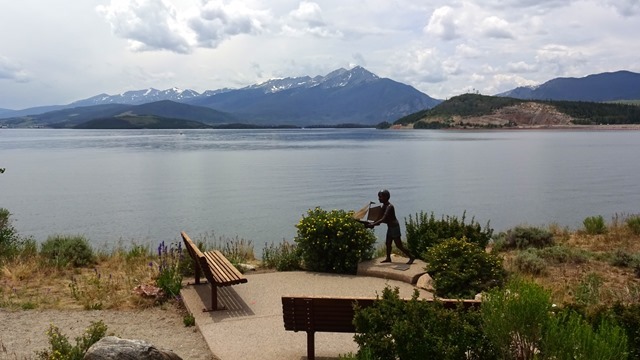 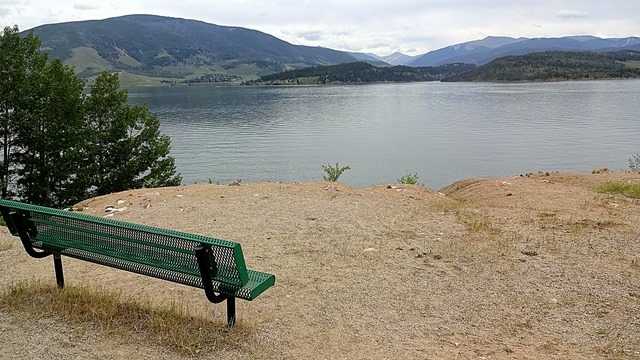 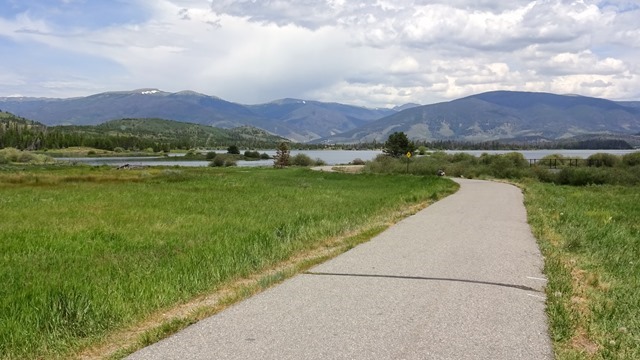 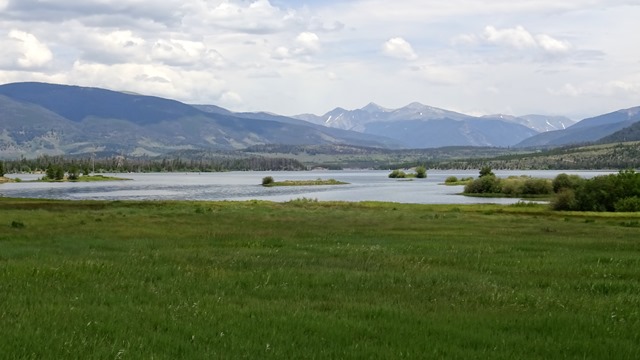 Also took a drive to Breckenridge, one of the nicer ski towns we’ve visited, and walked along Main Street looking for shoes and sunglasses. Didn’t buy anything except a couple beers and appetizers at Breckenridge Brewery. 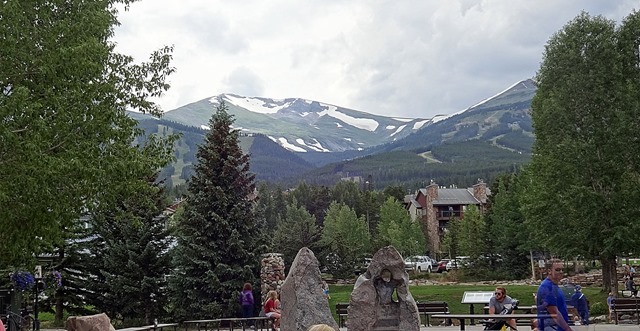 Since this campground is on reservations, yesterday we managed to piece together a 10 night stay here by moving sites a few times. It looks like a really nice area to hang around for awhile, especially if the sun comes out.