Another Gulch and More 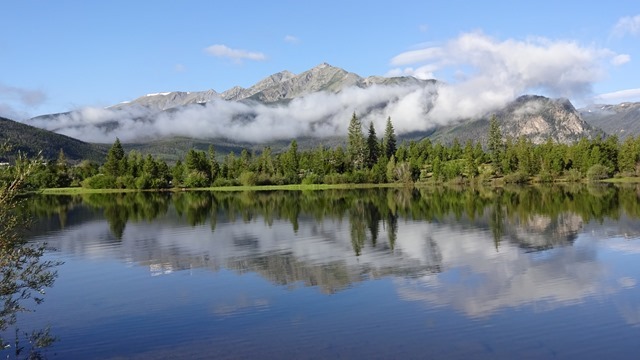 Yes, we’re still at Dillon Reservoir. It’s not often that we get to live on waterfront property, and the camp host told us we could stay as long as we like if we willed him our Lazy Daze, so why not!

We’re enjoying our feathered friends here. This geese family likes hanging out behind our site, and we’ve watched the little one grow up over the past few weeks. The “baby” is the one closest to the water. Dad, on the left, is very protective. 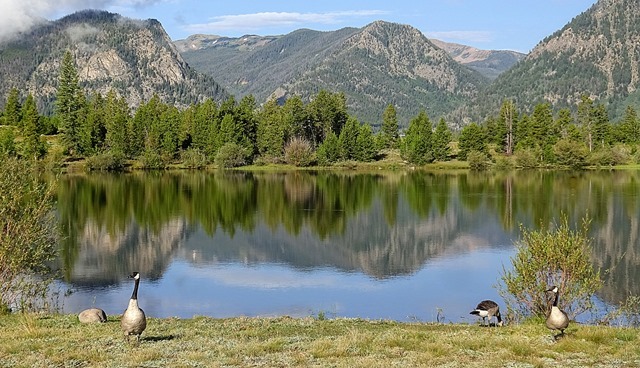 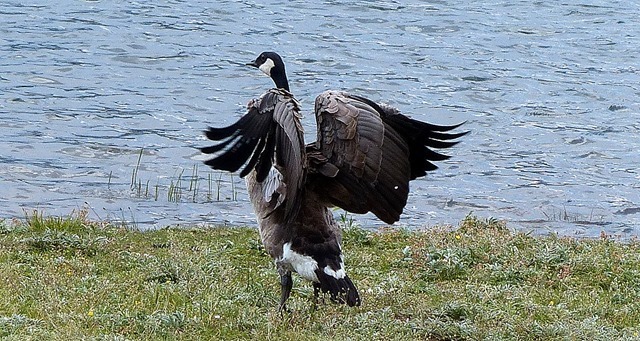 The hummingbird feeder is so busy I have to refill it daily. 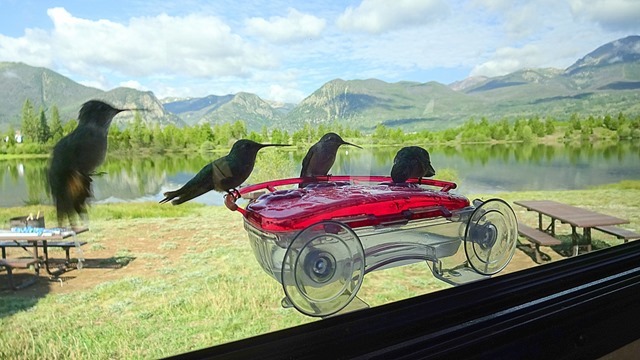 The one downside here is that day users think the campsite picnic tables are for anyone, and they walk between sites to get to them. I was out for a bike ride and Jim took this to show me. They are at our table but since we never use it anyway he didn’t say anything to them. He should have just come along with me on the ride. 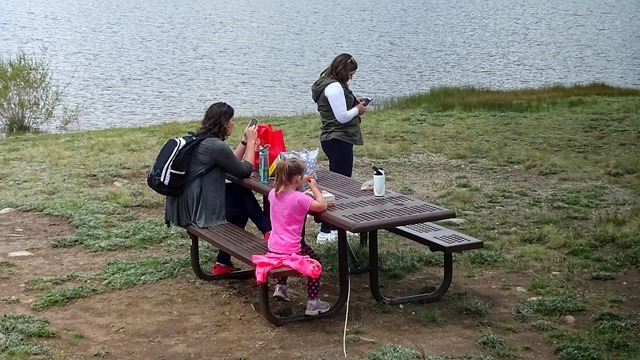 Jim has been busy shopping for a new bike. He finally made a deal on a used recumbent that should be arriving next week at our friends’ house in Littleton. After his crash in Moab last October he hasn’t been too keen on mountain biking and isn’t comfortable riding it on pavement, so we cleaned it up and listed it on Craigslist and Pinkbike. So far just two inquiries and no takers, but if we don’t sell it before we leave he’s going to try to fit one of the bikes in the back of the Subaru for now.

We actually were supposed to be in Carbondale for 10 days starting on the 7th, as we made reservations at the city park there months ago, along with friends Alex and Ellen. Unfortunately they are having issues with aging parents and were unable to leave California, so we decided to cancel also. Mainly because we found out the bridge at the Glenwood Springs I-70 exit is closing next week for reconstruction, and the detour will be a major traffic mess. Traffic was bad enough when we were there in June and it was still open, and that is the only way to get to Carbondale/Aspen in an RV short of taking Independence Pass, which we didn’t want to do.

We also found out that Stage 2 of the Colorado Classic bike race is taking place in Breckenridge tomorrow, which we want to go watch, and our friend Terry from Arkansas is racing in the nearby Leadville 100 on Saturday. He was diagnosed with pneumonia last week so may not be in the race but we hope to meet up since he will still be there whether he can ride or not.

Here are a few photos from our site. We’re still dodging daily monsoon thunderstorms, which makes for interesting skies. 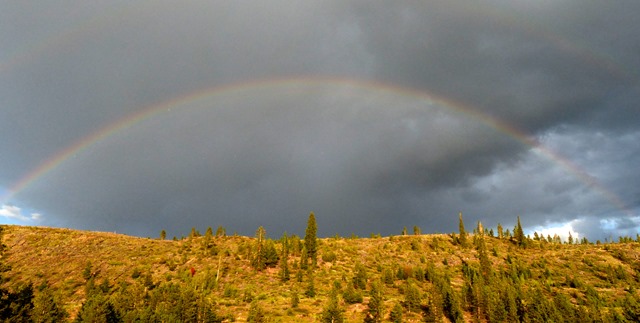 You can see the silhouette of our neighbor and his tripod, Dick Cunningham, a photographer who was here because he and his daughter, who lives in Breckenridge, are the organizers of the Main Street Art Festival that took place last weekend. If you like nature photography, check out his website here. 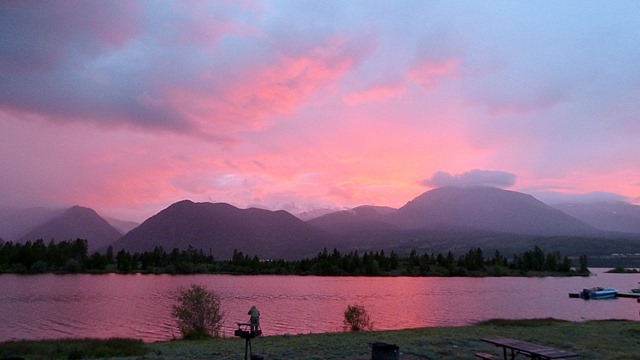 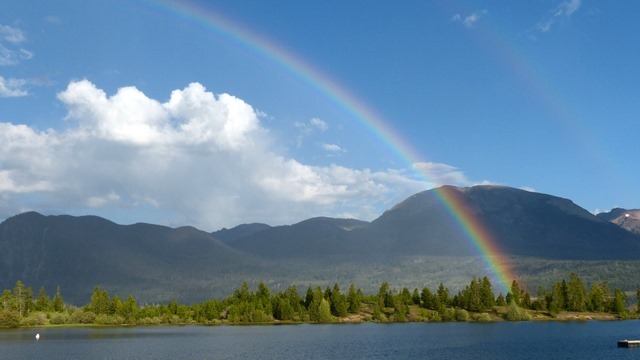 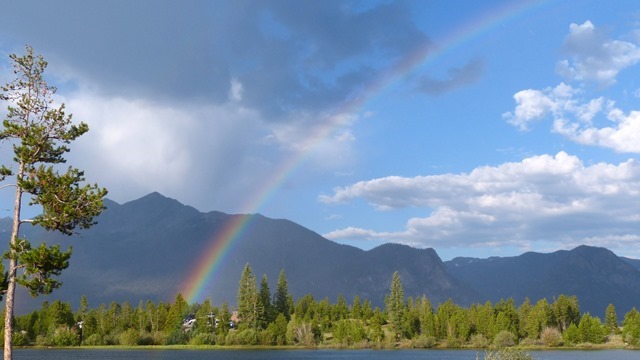 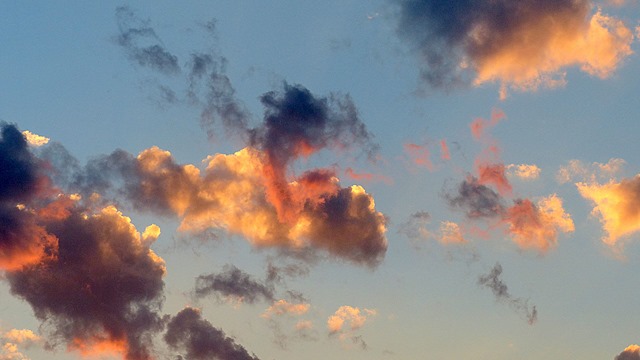 The local communities of Frisco, Dillon and Silverthorne all have free concerts different nights of the week. We listened to jazz one evening in Frisco at the very nice park right on Main St. It’s a popular activity. 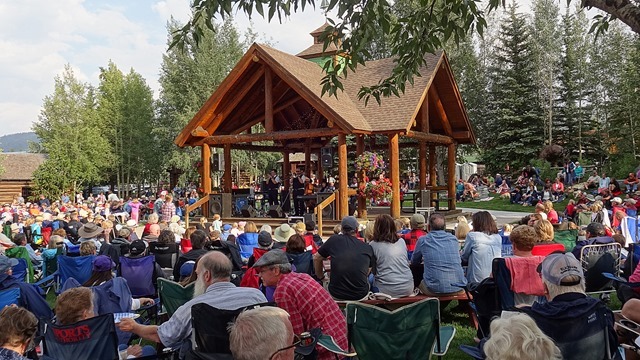 I’ve been doing a lot of biking on the paved trails around the lake, while Jim likes hiking up on the ridge behind the campground. Photo from Jody’s loop. 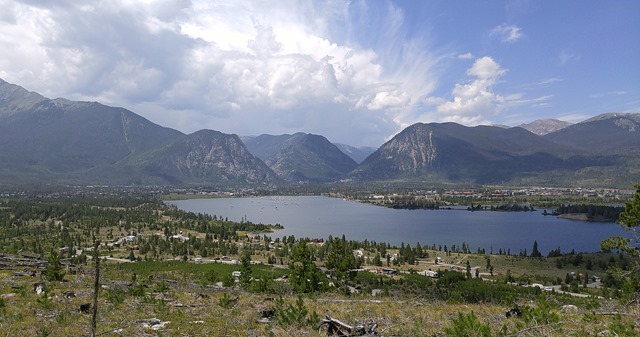 We managed to get in another higher elevation hike to Mayflower Gulch near the Copper Mountain ski area on the way to Leadville. It was a late start as usual but we evaded the thunderstorms and there were not many other people there.

The trail is actually the old road to the Boston Mining Company’s failed gold mining operations. Starting at 10,900’, the first mile and a half or so goes steadily uphill through the woods. 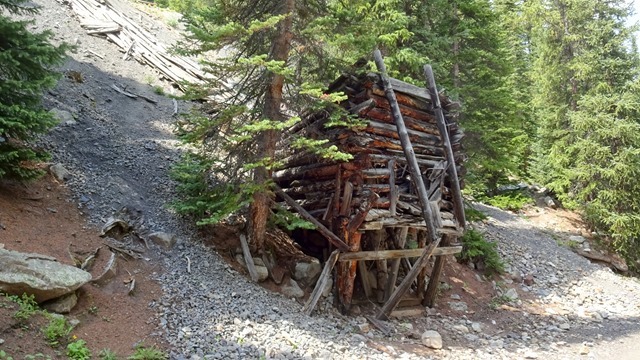 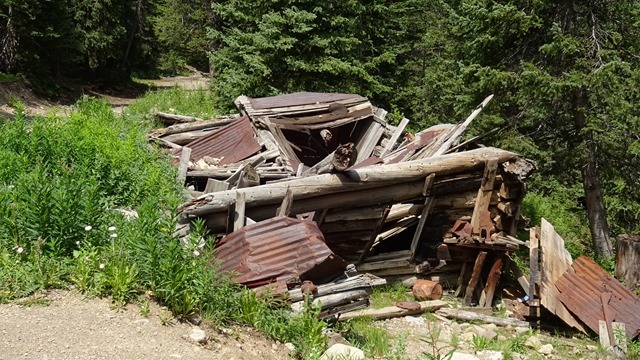 Then opens up for some typical Colorado scenery, although it was a bit hazy. We’ve been fortunate not to have the smoke we’ve been hearing about in other parts of the west. 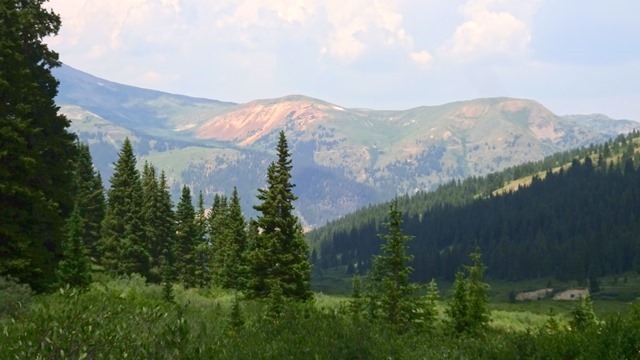 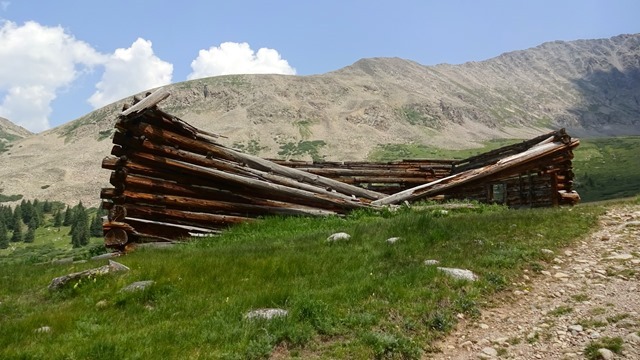 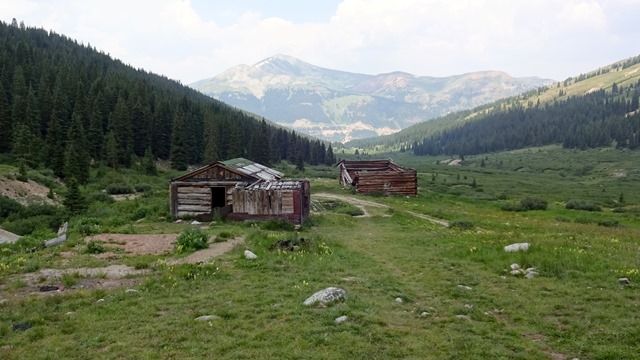 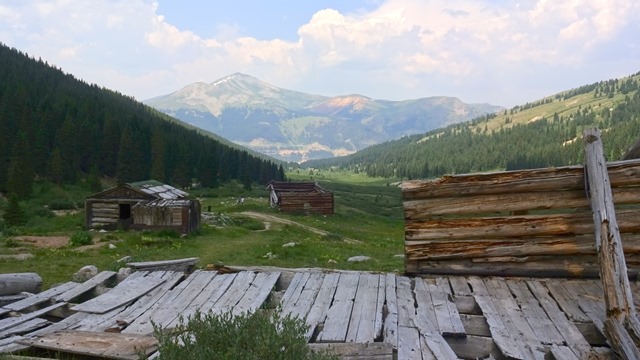 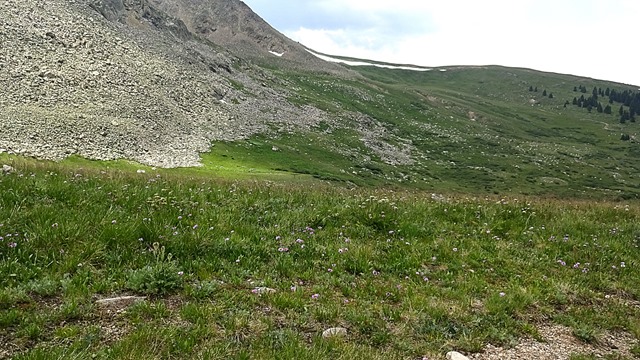 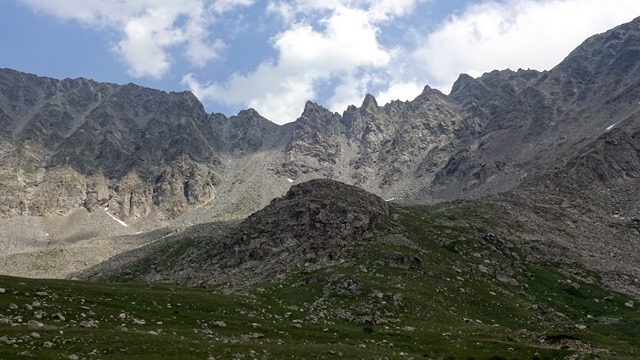 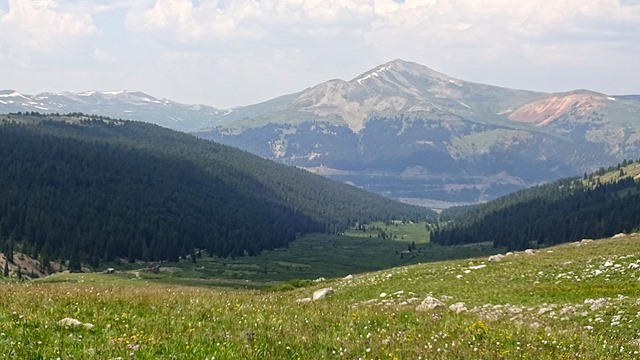 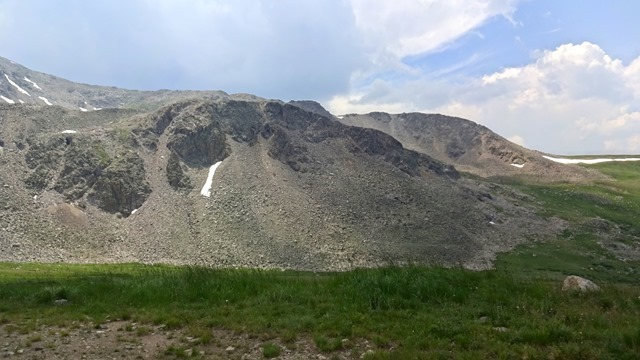 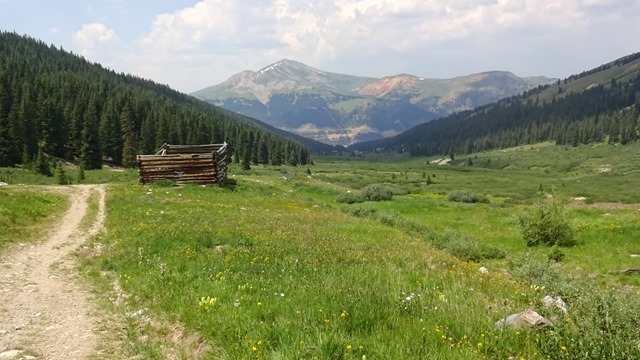 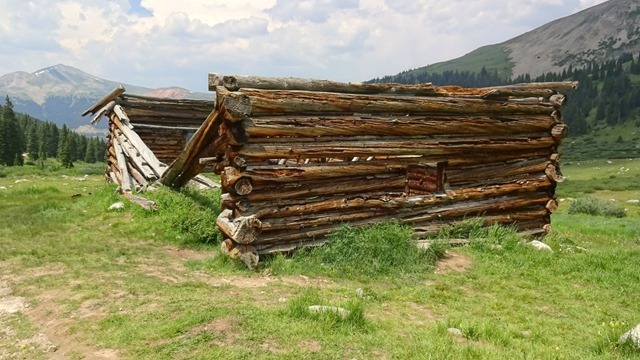 We continued past the buildings for another half mile and turned around here after 2.5 miles of uphill, gaining almost 1,000’, a pretty gradual climb for these parts. 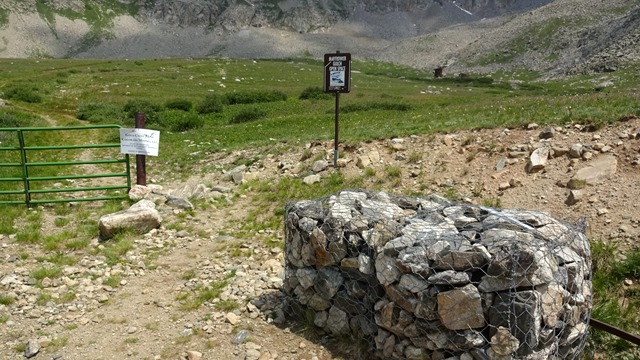 A day or so before this hike our Panasonic Lumix camera would not turn on again, and this time no amount of turning the mode dial or beating on it would make it work. Our sweet friends Robin and Lydia in Ridgecrest, CA are sending us a Canon SX40 that they don’t use, which should arrive in the next day or two, so we’ll test it out before the next post. For now my little Sony and Jim’s phone are doing an okay job. 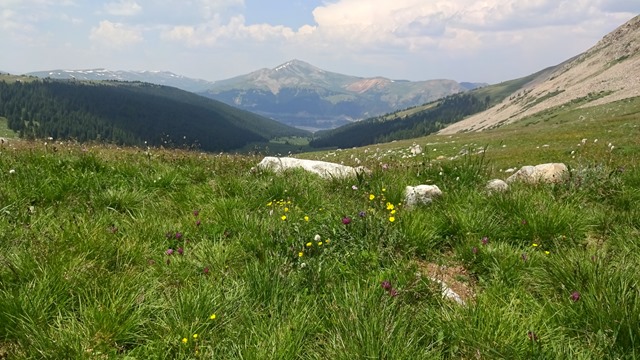