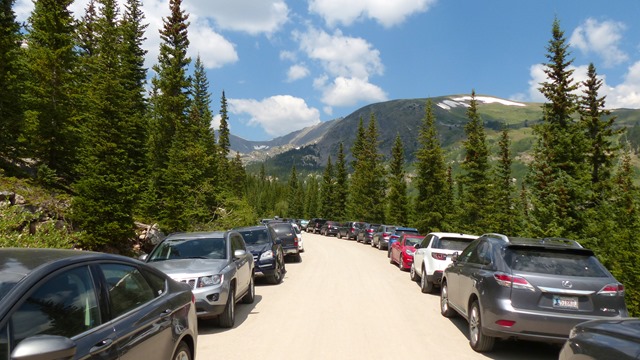 The McCullough Gulch trail is another scenic high elevation hike not far from Breckenridge, CO, which takes you to White Falls and an unnamed lake. As you can see from the number of cars parked along side the road, this is a very popular trail. In fact, Jim was ready to turn around and forget it when a car backed out of an actual small parking lot off the road and we managed to get in his place. Of course we didn’t arrive at the trailhead until almost noon, but this was a day with only a 10% chance of an isolated shower, so we figured we were good to go, as did a lot of other people.

Apparently the forest service has changed the start of the trail as the road is gated and you have to park almost a mile from the actual trailhead. All the trail descriptions say it is only a 2.7 mile round trip hike, but we actually ended up with 4.5 miles given the distance to the parking area. At least it’s a pleasant, level road to walk on. We were surprised we only saw a few other people on this part. 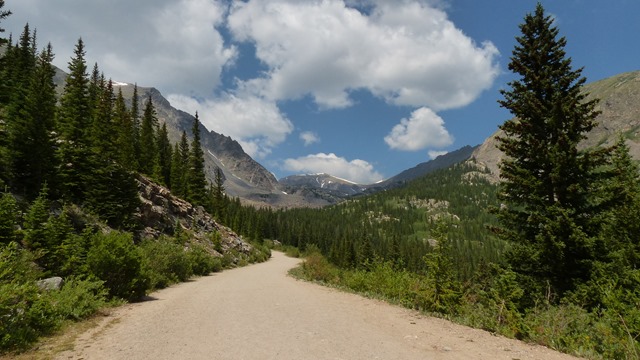 Never have figured out why shooting signs is a such popular thing to do. 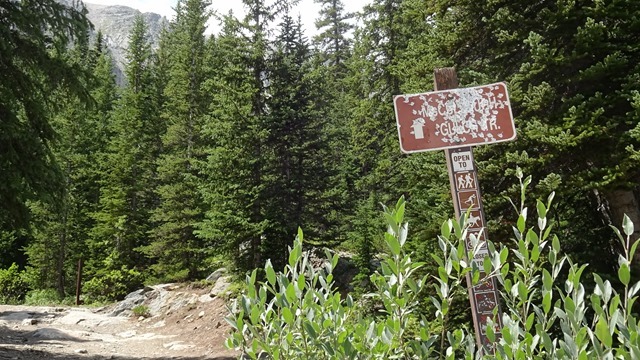 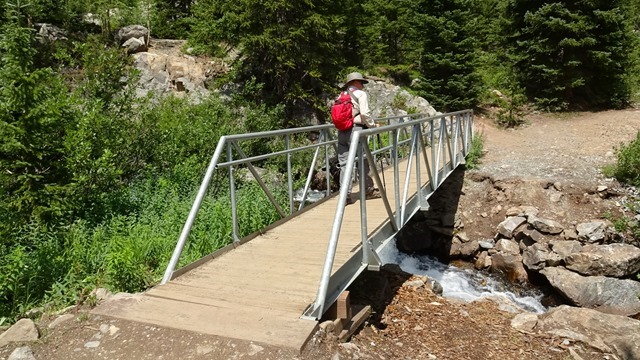 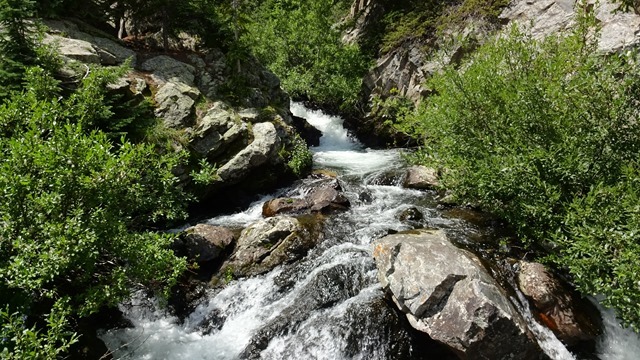 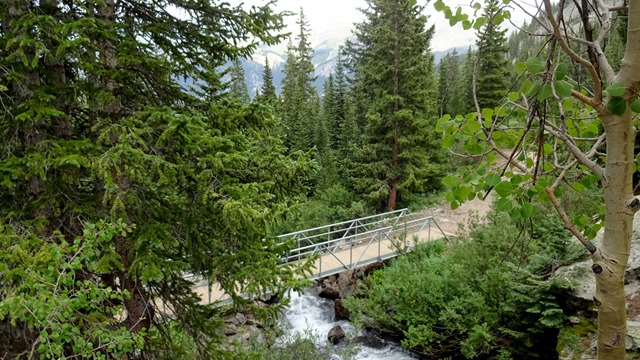 The actual trail starts off on a steep mining road and passes some remaining evidence. 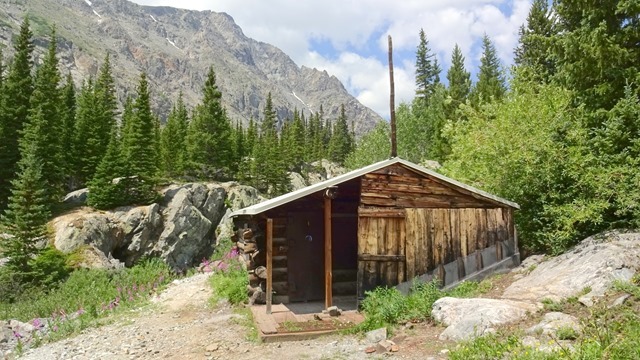 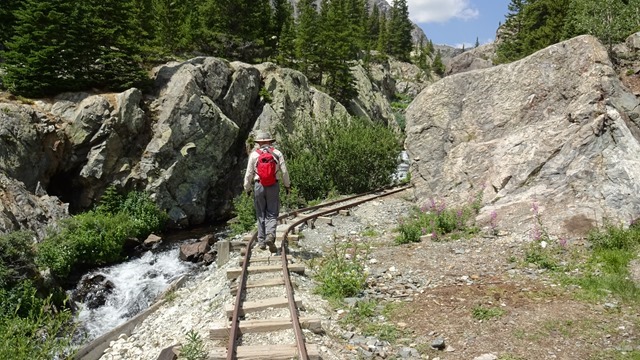 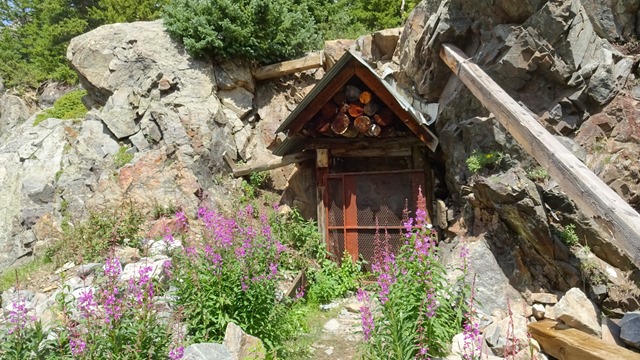 Had we not explored the railroad tracks we would have missed this pretty area. 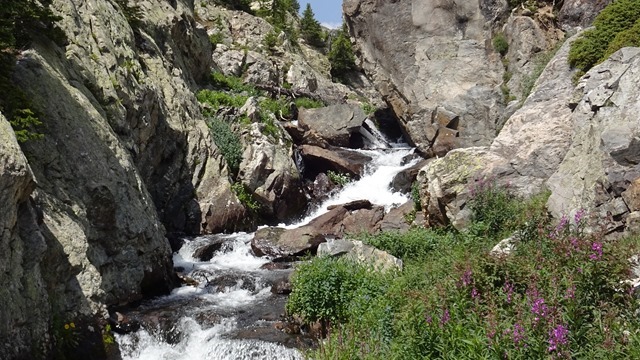 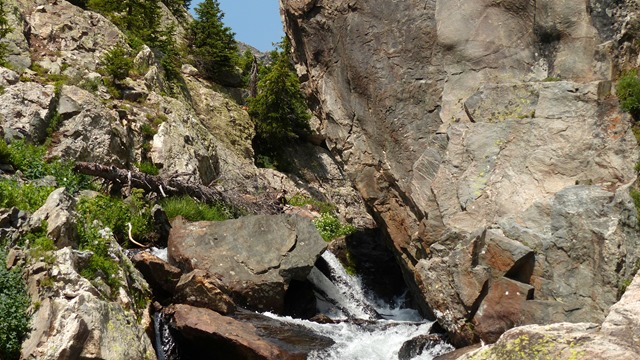 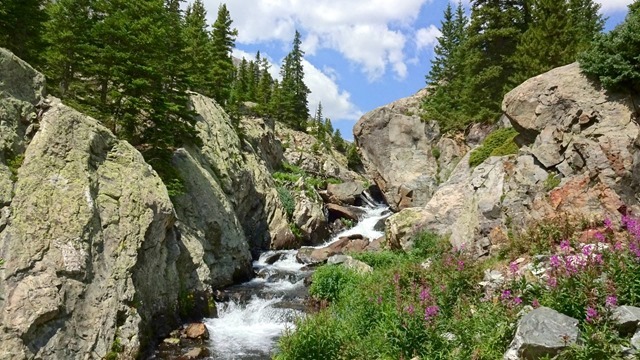 The trail soon leaves the old road and becomes even steeper, with plenty of roots and rocks to negotiate. 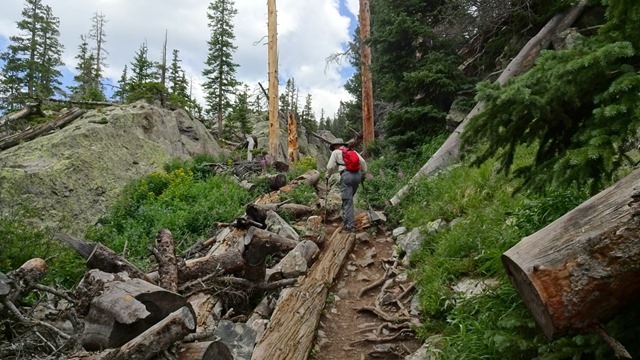 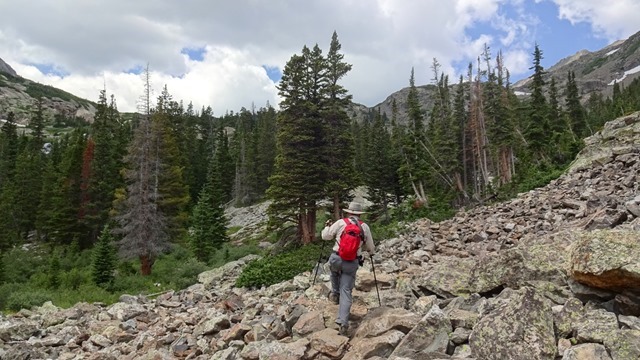 We passed a pond where some people were laughing about the woman thinking this was the lake. I’m sure she just wished this was the end of the hike. 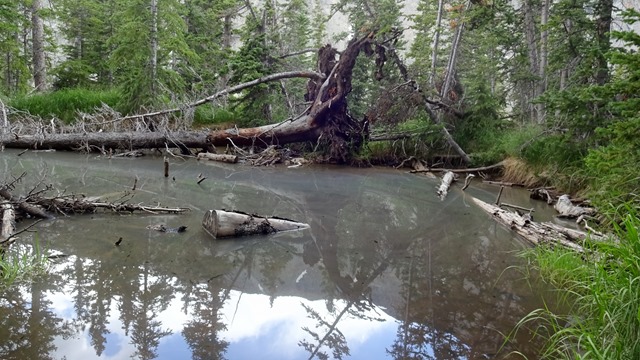 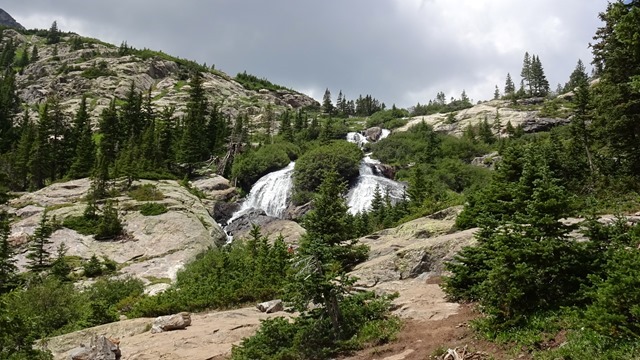 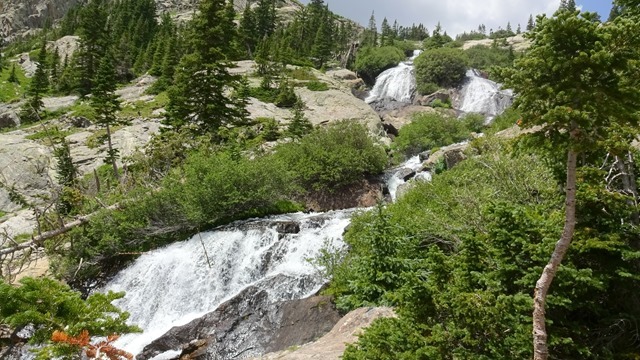 We scrambled off-trail to a secluded spot on some rocks right by the thundering falls, where we ate our lunch but could barely hear each other talk. 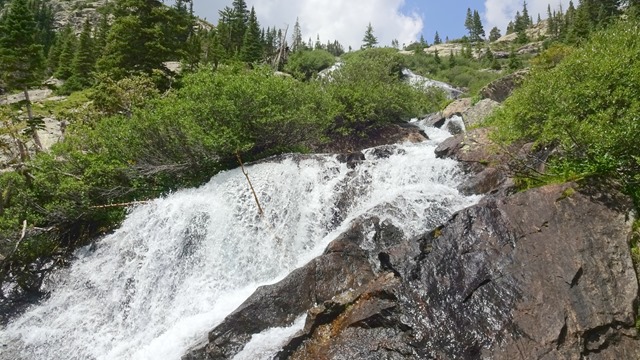 From the falls the lake is another 3/10 mile, but this is the most rugged, steepest part of the climb so it felt much longer. It appears neither of us took any photos of it as we were too busy watching our footing and trying to breathe. The good thing was there were quite a few people coming back down, so we had an excuse to stop and let them pass.

Finally after one last big uphill push we were at the lake. 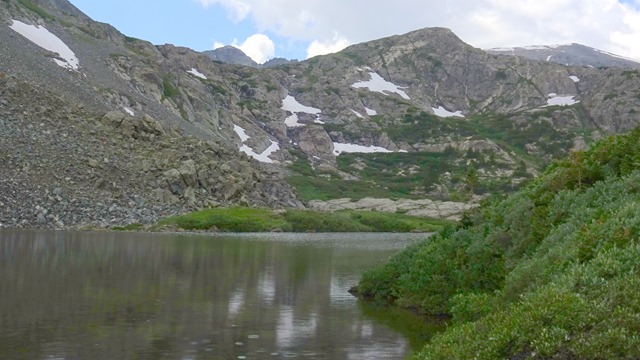 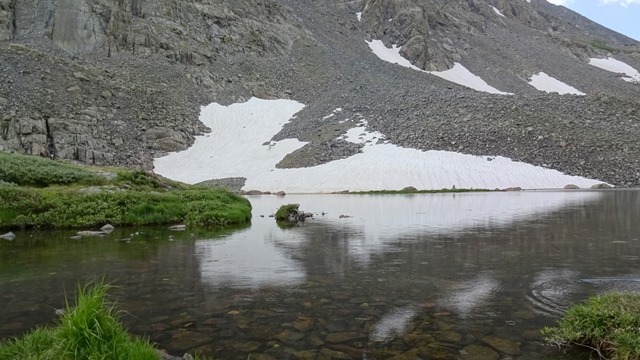 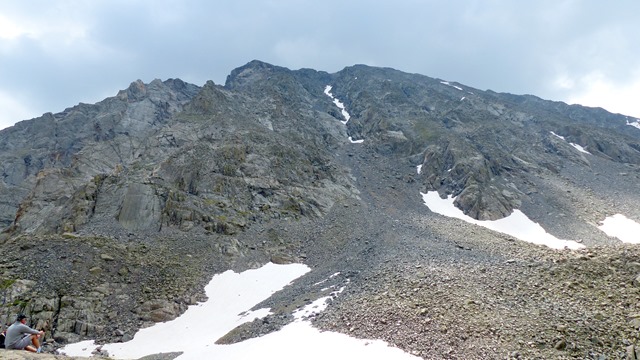 This is the outlet for the lake where it drops to form the falls. 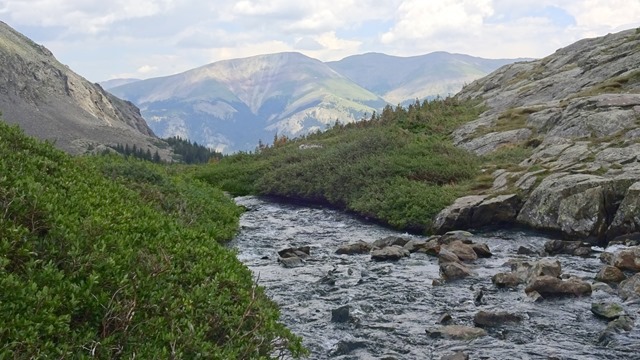 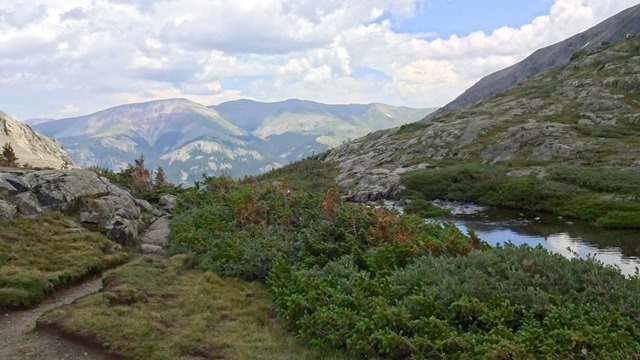 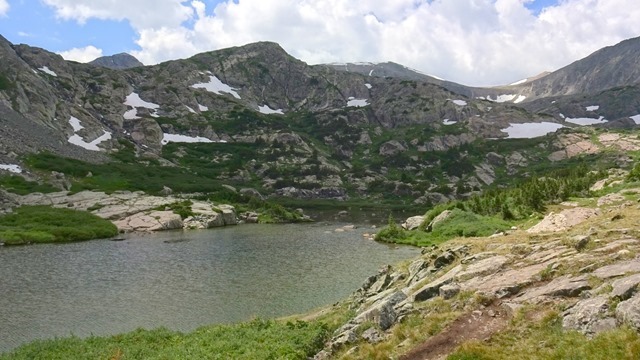 Jim took this of me heading down the steep part of the trail from the lake. 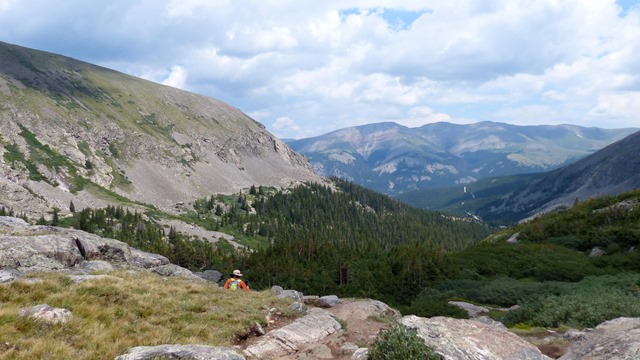 And I took this of Jim coming back down from the lake, which is hidden from view just behind him. 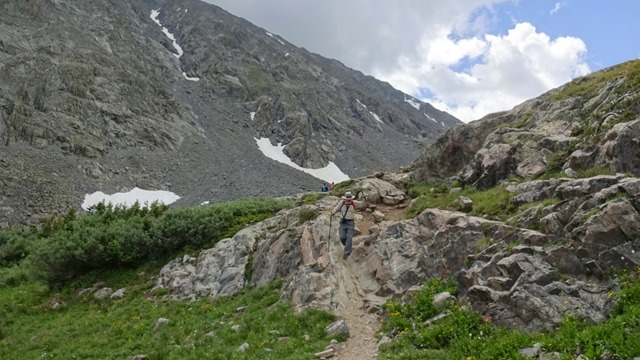 The sky was darkening ahead of us on our way back down but we only got a few drops of rain. We still passed several people making their way up. 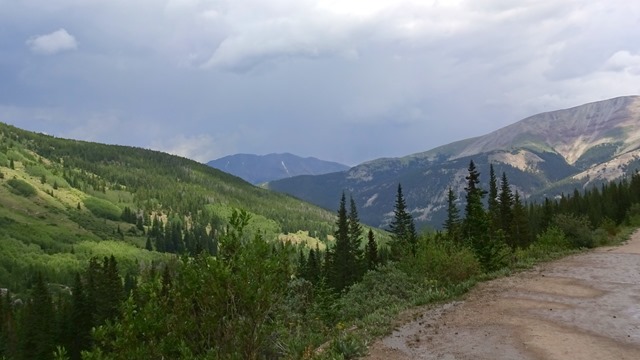 It’s a challenging trail, but definitely worth the effort. Jim slipped on a rock coming back down and got a big gash on his shin, but as we always joke with Mark and Bobbie, it’s not a good hike unless somebody bleeds. And we survived to hike another day…