But first, a view of Lake Powell from our campsite near Lone Rock Beach. 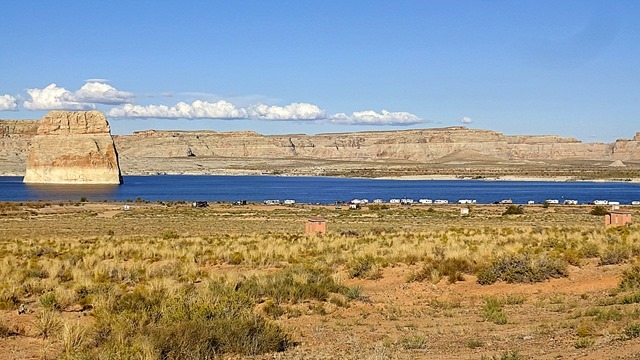 Our drive from Cortez, CO to Page, AZ on Wednesday consisted of 230 miles of pleasant scenery through the Ute and Navajo reservations on two lane roads with light traffic. Along the way we stopped for gas and then again for lunch, where both times Jim checked to make sure everything was good with the tow bar and the bikes. I took over the driving after lunch and about 50 miles later felt something odd in the steering and noticed the Subaru crossing over the center line to the left, when I anxiously told Jim I thought the tow bar just broke. If you’ve ever towed a car behind a motorhome you know that it really isn’t visible back there except through the rearview mirror or camera if you have one, so it was quite a shock to see it where I did. Talk about an adrenaline rush!

Luckily there were no other vehicles in either direction so I immediately slowed down but could not pull off the road as there was no shoulder. I slowly crept along for maybe another half mile (seemed like 10) with the right turn signal on before we found a wide enough area to pull over, listening to the bar drag along the road as we went. I’m sure some other vehicles must have passed us but I have no recollection. It was probably good that I was driving, as I would have freaked out even more being the passenger. Much to our surprise the tow bar did not fail, nor did the pin come out. The entire large pin that connects the tow bar to the baseplate came out and was still attached to the tow bar on the driver’s side. Never thought to take any photos at the time, but this is the part that came out. 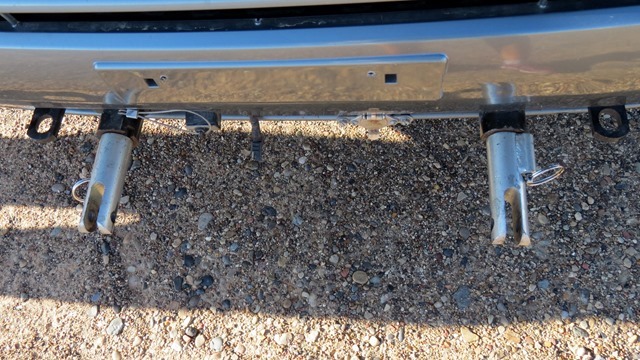 For anyone familiar with this setup, you know that these have a spring loaded mechanism and to put them in you have to push hard and twist until they lock in place. Jim can only assume that when he inserted them that morning the one did not fully engage and lock and over time pulled itself loose. At least that is what we are hoping since we can’t imagine any way they could come out otherwise.

The good news is we had no damage to the car or Lazy Daze, just some holes in the Protect-A-Tow fabric, which already had holes in it anyway and needed to be replaced. The end of the tow bar got a little scuffed up and the nut and bolt Jim replaced a couple weeks ago when he put on the new rubber boots got ground down from dragging on the pavement. Also the clip was missing from the tow bar pin but we think that happened during the dragging. We had replaced the pins several years ago and saved the originals as spares, so we were able to put everything back together and keep towing the car. It was a tense 50 more miles to Lone Rock Beach, with Jim driving and me going back to the bedroom several times to make sure the car was still attached, but everything was fine.

We found the correct size replacement nut and bolt at Ace Hardware in Page yesterday, touched up the black paint that was worn off the end of the bar, and taped up the torn Protect-A-Tow fabric, so we should be back in business. Jim is still disturbed that he didn’t put the pin in properly, as over the past nine years we’ve hooked up the car hundreds of times. But I’m disturbed that maybe it was really in place and somehow it came out anyway. What’s hard to believe is that we had driven 180 miles that day before it came loose. Remembering Paul and Nina’s (WheelingIt) tow bar accident last year, and our Lazy Daze friends David and Mary’s similar experience a couple years ago, we felt very fortunate that the car or RV did not sustain any damage, nor cause damage or injury to anyone else. 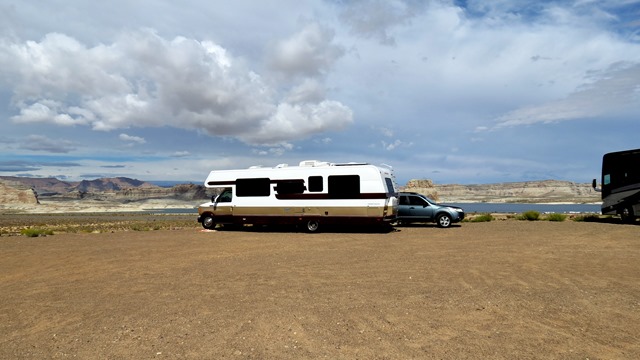 This was just a two night stopover at Lone Rock, a place we’ve visited several times before so we had planned on camping up in the upper area since most people opt for the beach. After seeing the crowd down by the water we were glad we did. It was a very quiet, relaxing stay. The beach is a great place to camp if you have a boat or kayaks to get out on the water, but we did it once and ended up with blowing sand in everything, plus there’s always that worry of getting stuck. 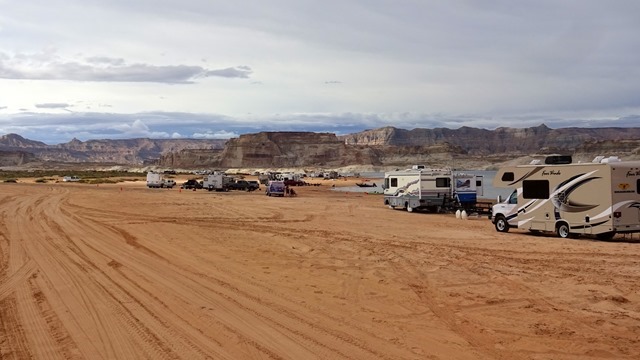 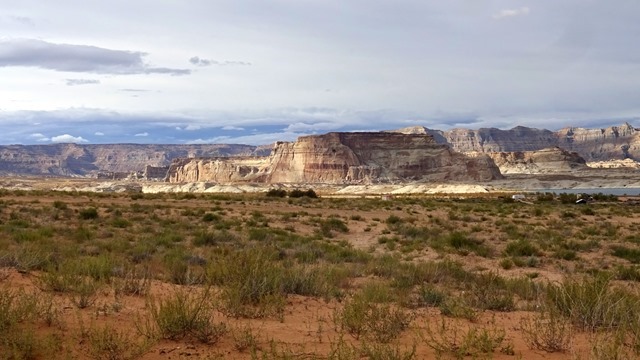 We walked the beach and took a short hike on the Hanging Gardens trail just past Glen Canyon Dam. We took this trail the first time we visited here but did not remember how pretty it was, probably due to a case of red rock intoxication. 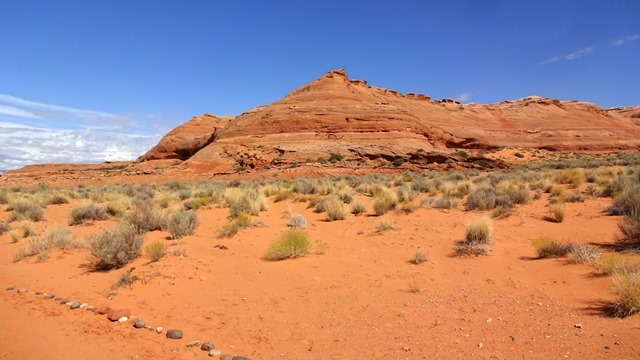 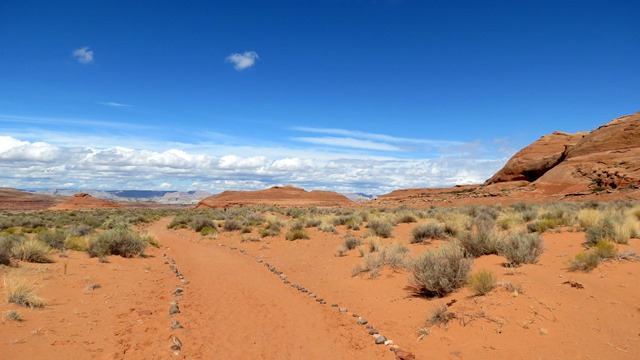 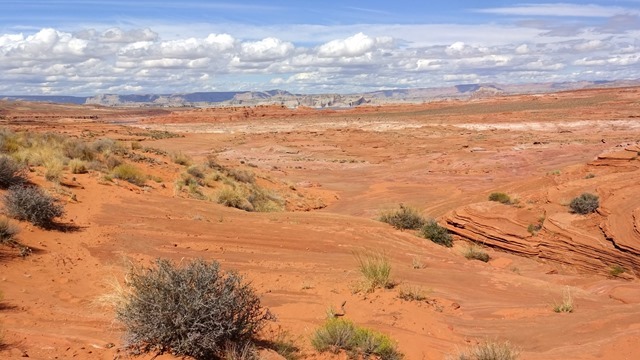 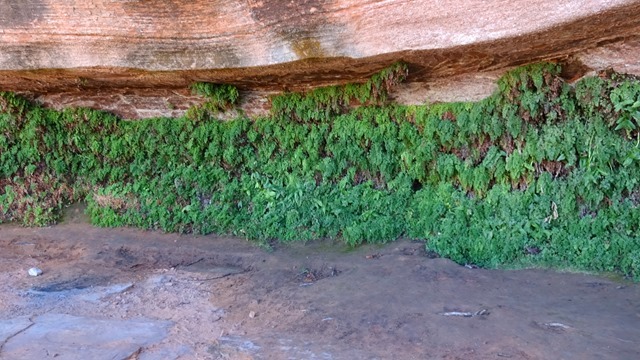 This trail officially ends at the hanging gardens, but we scrambled up the slick rock to get higher and walk along the ridge for a better view of Lake Powell. 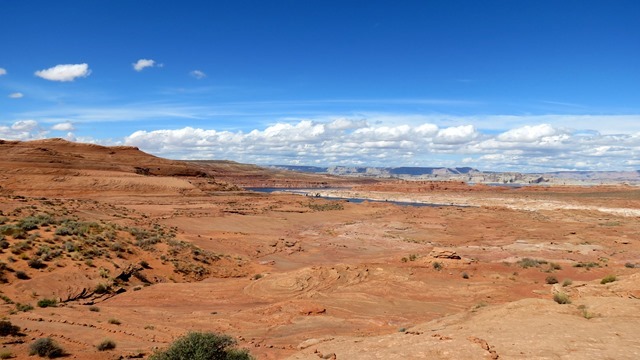 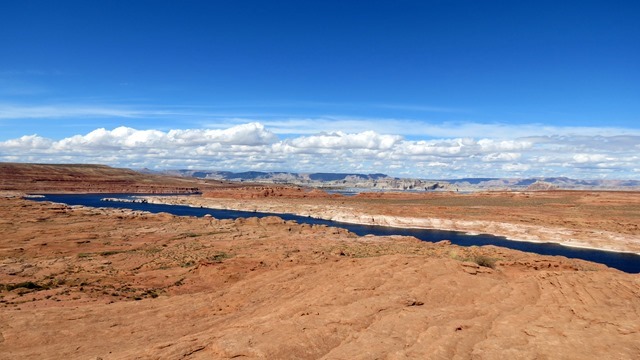 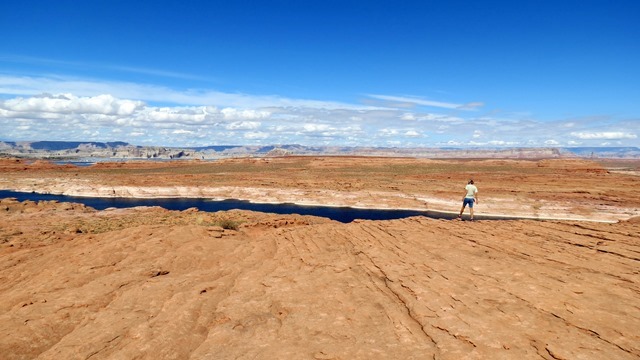 Today we hook up the car for what we hope will be an uneventful 70 mile drive to Kanab.