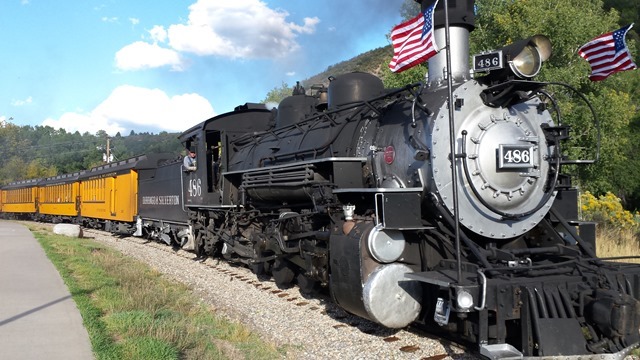 Durango-Silverton Railway as seen from the Animas River Trail

Our second week here is about to come to a close. As we’ve thought previously, this is a good place to spend some time, and we’re glad we stayed at the Fairgrounds again. You never know who your next-door neighbors might be. 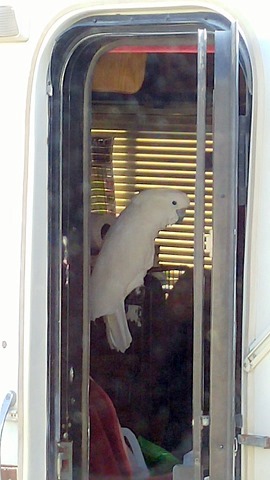 And we’ve had almost nightly visitors that knock over trash cans looking for leftovers. Unfortunately we have not seen the bear or bears responsible. The first can is very close to our site but we apparently slept right through the pillage. The second can is near the entrance to the RV area. Our neighbor peeked out and saw a bear with its head in the can one night. I wish the county would invest in bear-proof cans, since this situation never turns out well for the bear. 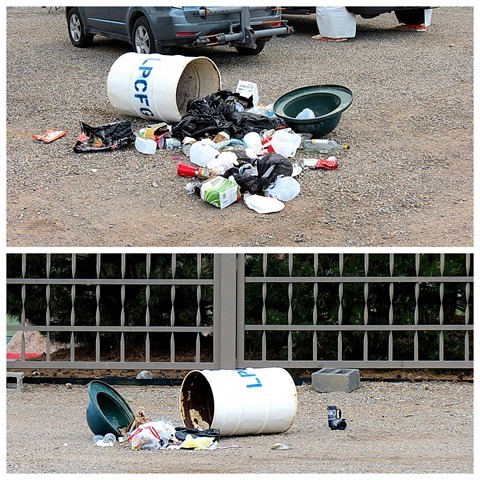 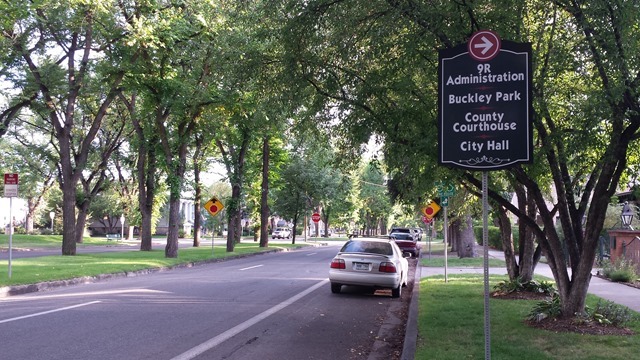 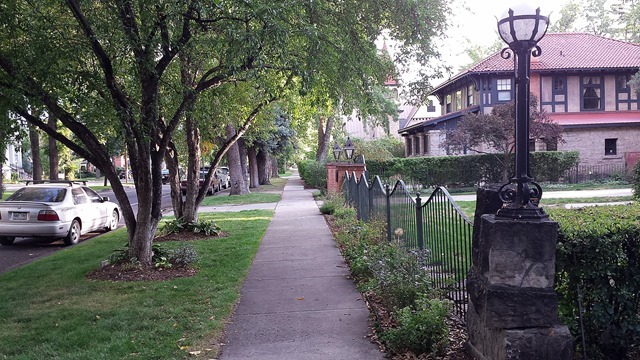 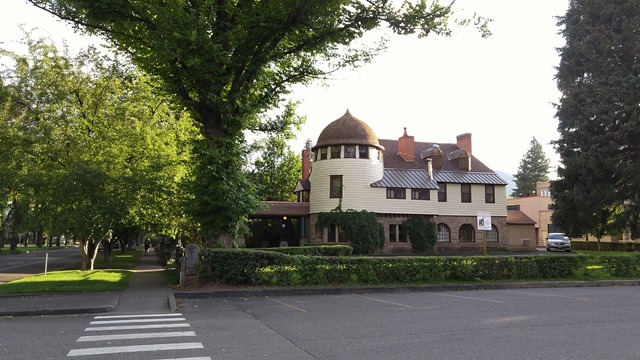 After our hike in Silverton with Mark and Bobbie last week, Jim was having some Achilles tendon pain but it seemed to go away so a couple days later we decided to play pickleball at the Recreation Center. Not having played since we were at Jojoba Hills back in April, it was probably not the best idea to play for over two hours, but we were having too much fun. After we finished Jim’s leg was bothering him much more, so he’s been taking some time off from walking, hiking and biking. His leg is feeling better each day so he hopes it will continue to improve.

He did manage to replace the torn boot on the Blue Ox hitch, and discovered the beginnings of a tear in the other one. The boots come in a two-pack, so after we struggled with getting the first one on he did the second one without too much trouble. Trying to get the heavy rubber boot over the larger knuckle was quite a challenge, even with lots of silicone spray as a lubricant. After a phone call to Blue Ox with the advice to use pliers with care, Jim remembered he had some with smooth plastic covers and was able to grasp the bottom of the boot and pull it down, then push it on the rest of the way. I think the only injury incurred was a bruised shoulder. Nothing is ever easy. 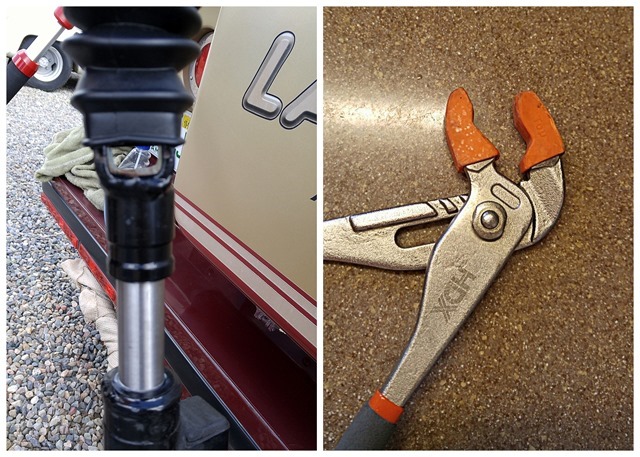 As much as I hated leaving Jim home alone, on Monday I drove 40 miles north to Little Molas Lake for another hike with Mark and Bobbie, this time on the Colorado Trail. Jim and I had done a short hike there in 2012 on our first visit to Durango, but we got turned back by thunder and rain. Despite the weather that day it was such a beautiful area I have always wanted to return and was thrilled to finally get the chance.

Although there was no chance of rain we met at 9AM, meaning I had to leave before 8. Not wanting to be late I didn’t have time to stop for photos but the golden aspen leaves were so dramatic in the morning light. I figured I would just stop on the way home and hope they looked as pretty in the afternoon. Good call, since even though I arrived 8 minutes early, as I figured Mark and Bobbie’s Subaru was already in the parking lot. The thermometer registered 37 degrees, a bit colder than I care for, but I was layered up, knowing we would be starting off at 10,800’. We had some good thunderstorms the previous day and on into the evening, and there was still a lot of hail on the ground on the first part of the trail through the woods. The trail gained elevation right from the start so we warmed up quickly. 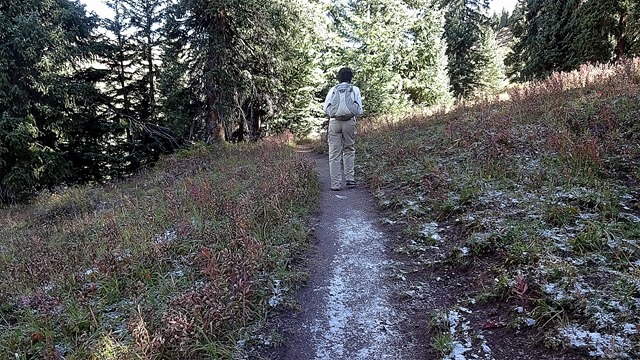 Soon we were out on the open trail with abundant sunshine. It was a glorious day, one that really makes you happy to be alive. 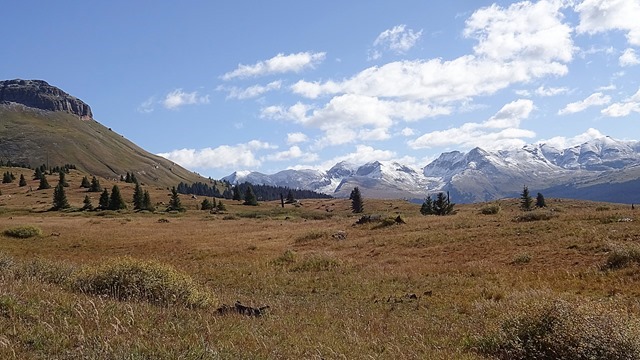 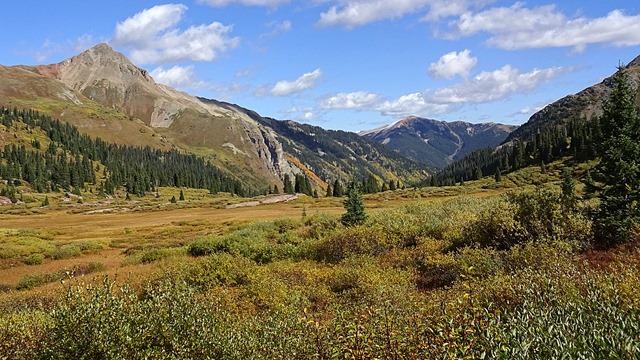 You can see Bobbie’s hiking pole pointing out Engineer Mountain, which they have summited in the past. 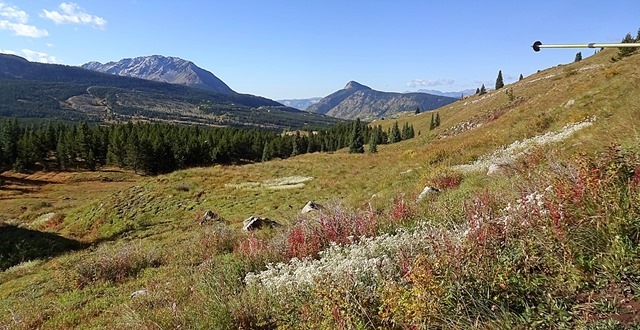 This area was part of the 1879 Lime Creek Burn, a fire that incinerated 26,000-acres of forest. I hate it for the forest, but the barren landscape sure makes for some fine scenery. 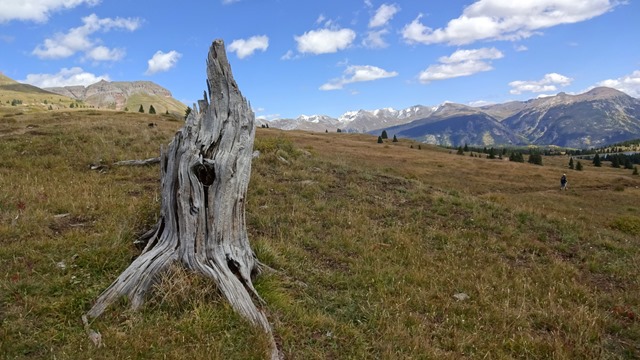 A rare photo of Mark smiling. Can’t remember what I said to make them laugh. 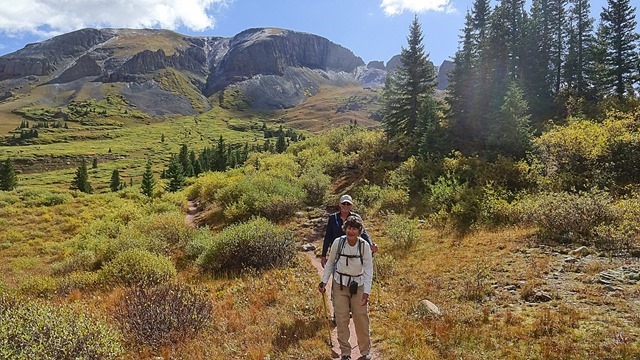 At the trailhead we met a couple of nice guys from Taos, New Mexico, just heading off on mountain bikes, their first time in the area. They did a lot of walking their bikes uphill, having a hard time with the elevation even though Taos is at 7,000’. We caught up with them several times on the climbs and I think one of them was wishing he had left the bike behind and just hiked instead. We saw them again going back downhill and they were having a much better time. 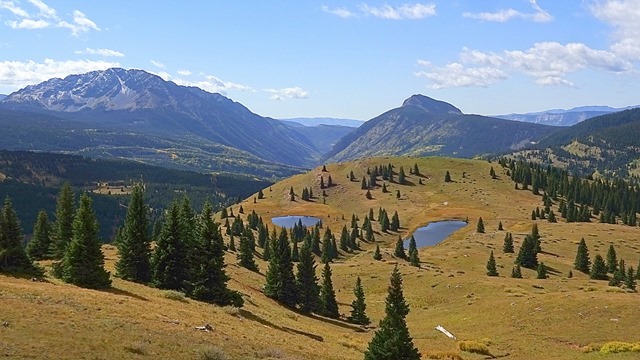 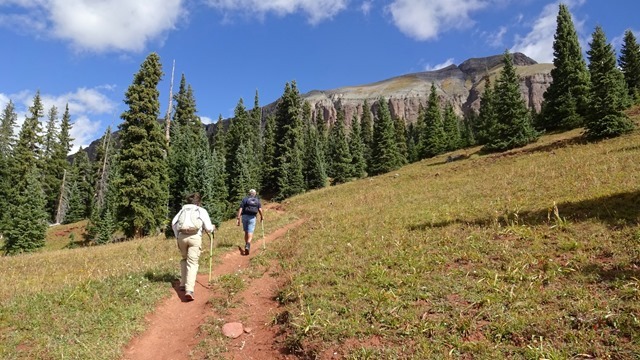 A snack break at 4.25 miles, with Bobbie studying her map, led to a discussion about continuing on. I was feeling good since the uphill was not seriously steep, and you know these two wanted to keep going, so on we went. 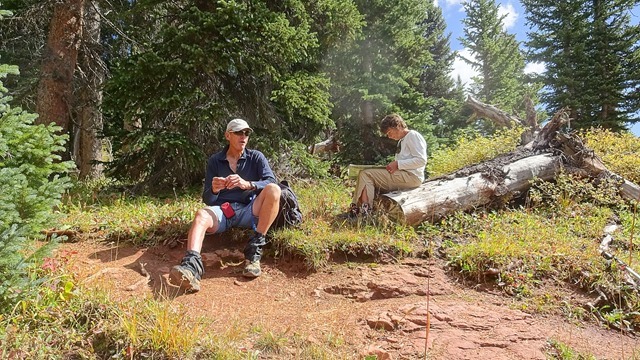 When we passed the 5 mile mark I decided it was time to turn back. Bobbie wanted to go on just a bit farther but it was downhill and I knew coming back would not be fun. Thankfully Mark was kind and sided with me. I know this was a very mellow hike for them, climbing “only” 1,500’ altogether, but the distance made up for the lack of difficulty. 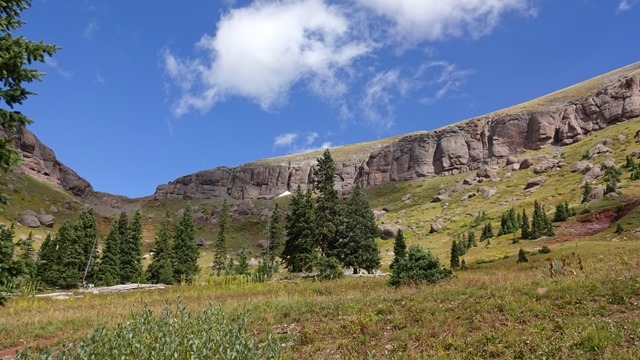 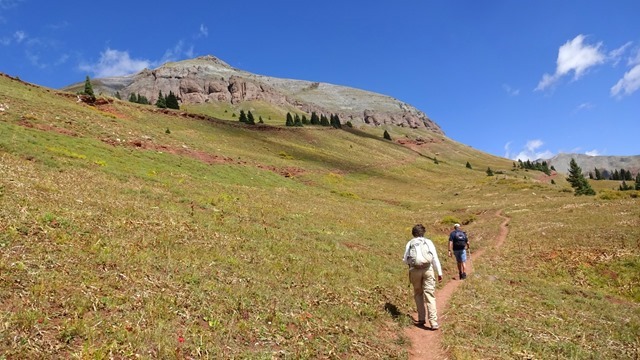 Although all the wildflowers were gone, there still was plenty of color in the landscape. 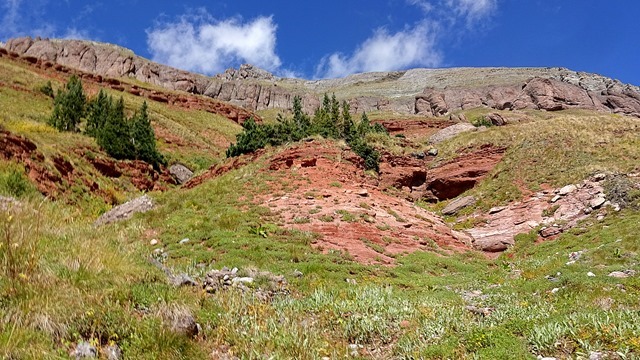 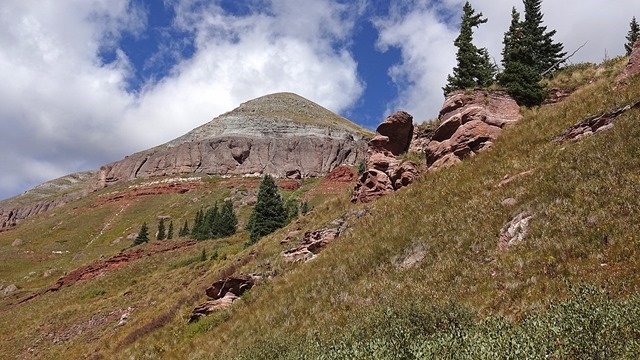 Heading back down we passed a thru-hiker on day 41 of his 486 mile hike. He said the worst part of the hike was dodging all the lightning, rain, and waking up to snow. Starting just southwest of Denver, the Colorado trail crosses five mountain ranges, ending in Durango. He was just a few days from the end, and looking forward to the free beer that Carver Brewing Co. gives to those who finish. 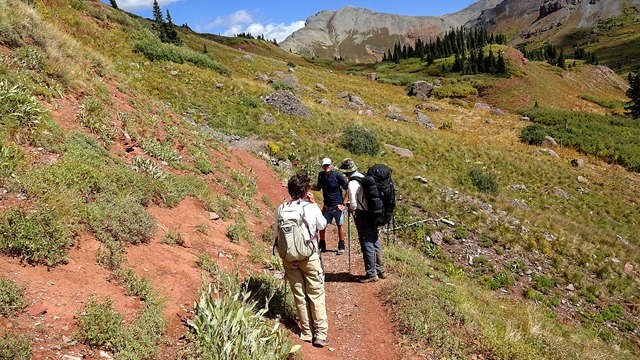 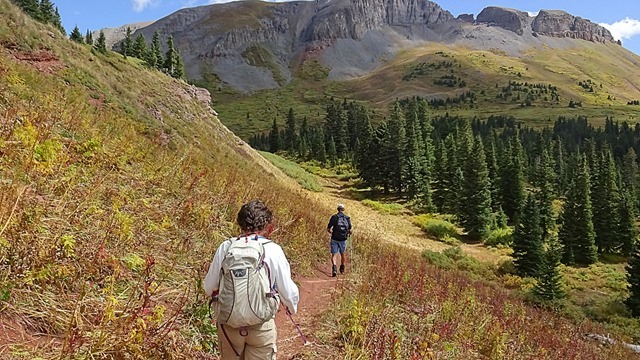 We also met a young couple mountain biking with a cute dog from Jackson, WY. Although Jackson is certainly a beautiful place to live, they were blown away by the trail and the views and said they had never seen anything like it before. 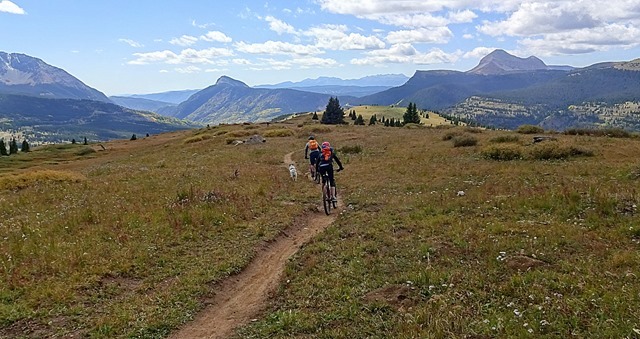 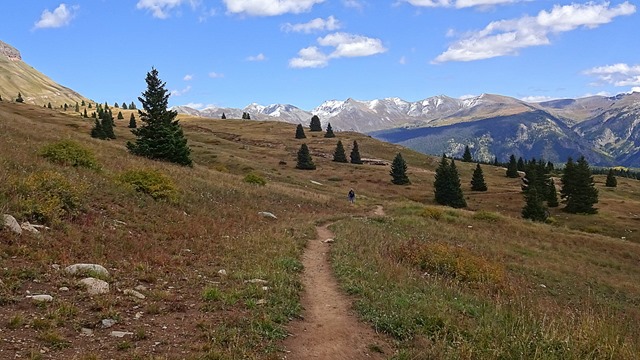 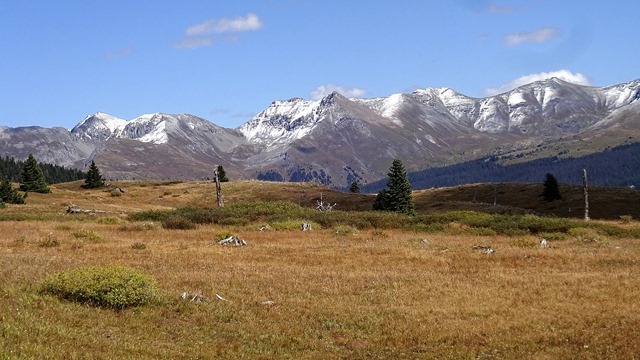 For more photos and a more literary version of our hike, check out Box Canyon Blog. I also want to thank Mark for not taking my picture when I slipped and fell in the mud 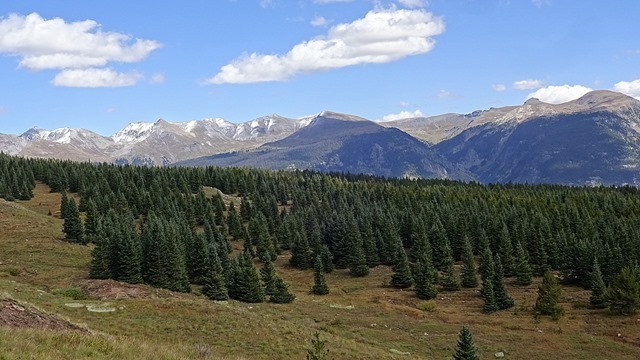 I was too tired on the way home to stop for photos of the aspens, but I did take a few shots out the dirty windshield. 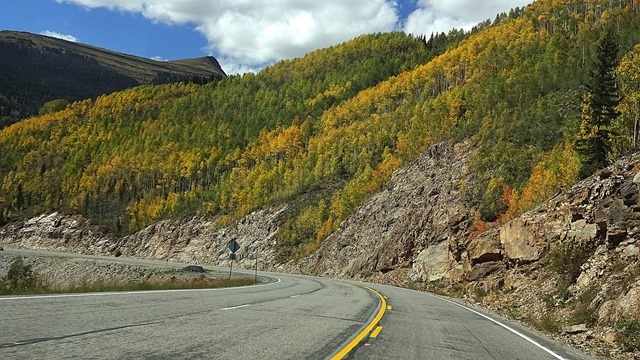 Since I didn’t feel like cooking dinner, and having been to Ska Brewery, which we really like, a few days earlier, after I got cleaned up we went downtown to Steamworks Brewing Co., tasty beer and a great quinoa burger with roasted garlic mashed potatoes. A fine end to the day.

Today we move on to Cortez, our last stop before leaving Colorado.