On the Road to Yuma

We left Virgin last Friday, heading out around 9 (very early for us) since we had to dump, pick up a few groceries and stop at Lee’s Discount Liquor in Mesquite, NV. It was 175 miles to Boulder Beach Campground at Lake Mead, and we wanted to arrive as early as possible to be sure to get a campsite for Friday night. Luckily we gained an hour going from Utah to Nevada. I saw that John and Pam (Oh,The Places They Go!) were at an RV park in Boulder City, which was only 5 miles from Boulder Beach, and emailed Pam a couple days before we left to see if they would still be there. Pam suggested we come by their place to go for a Jeep ride, hike and dinner at a nearby brewery. Sounded good to us!

The trip was uneventful and we got a nice site at the campground, which was full when we got back that evening. This is part of Lake Mead National Recreation Area and the sites have no hookups but there are threaded water spigots scattered around, flush toilets, trash, and a dump. We paid $10 with the senior pass. And our site was perfectly level, something we rarely encounter. 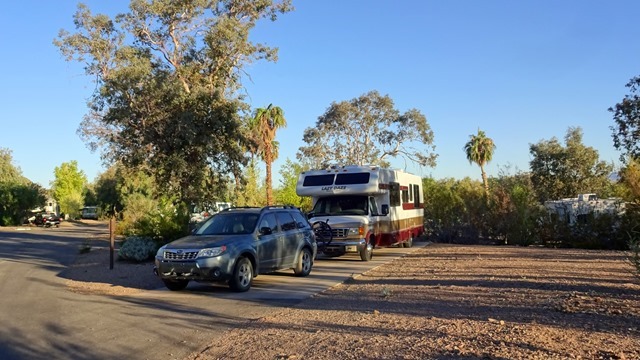 We even had a view. 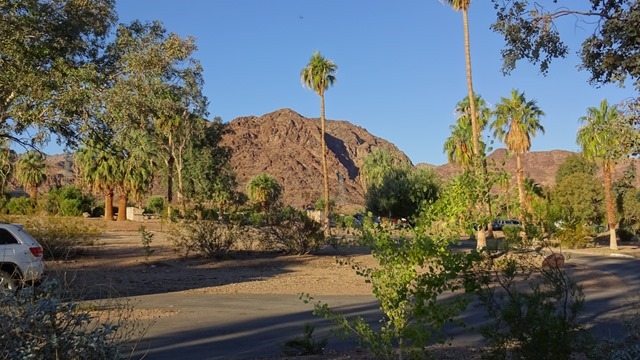 After getting set up and eating lunch we drove over to John and Pam’s, then headed out in their Jeep to a 4 wheel drive road that was actually in Arizona. Don’t ask us where it was, since John was driving and we paid no attention to where he was taking us. After what seemed like 20 miles but was probably less than 5, we came to the end of the road (if you could call it that), and began to hike the rest of the way down a wash for about a mile until we reached the Colorado River.

We had a couple of impasses early on that required some acrobatics on our part. 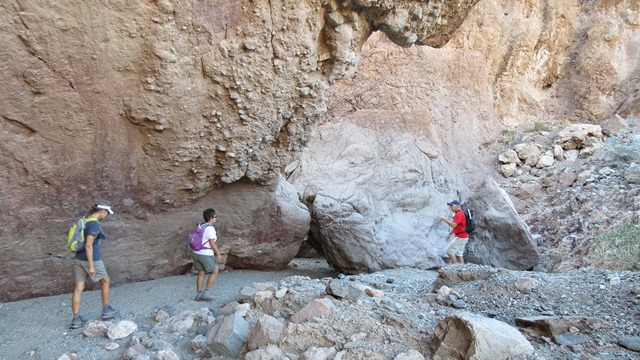 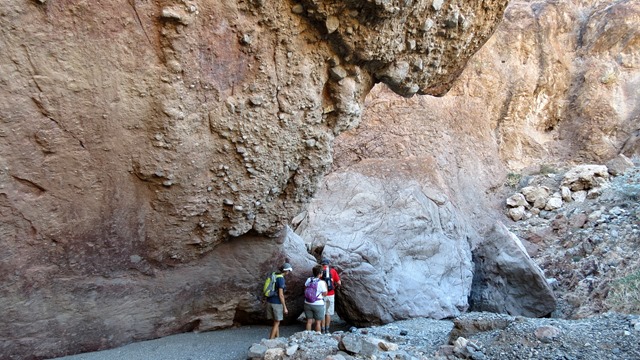 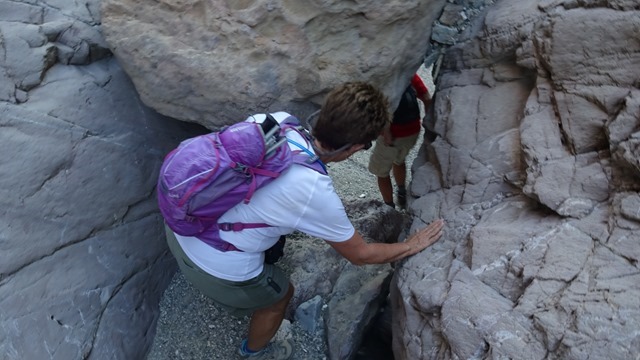 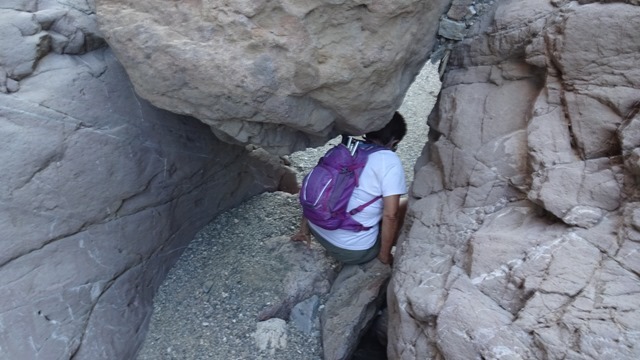 But after that it was a nice walk. 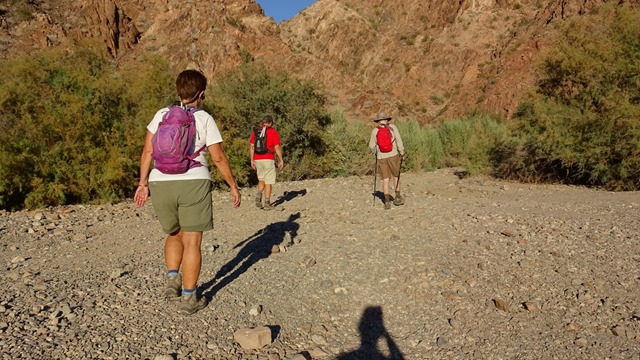 Which ended in a lovely spot along the river. 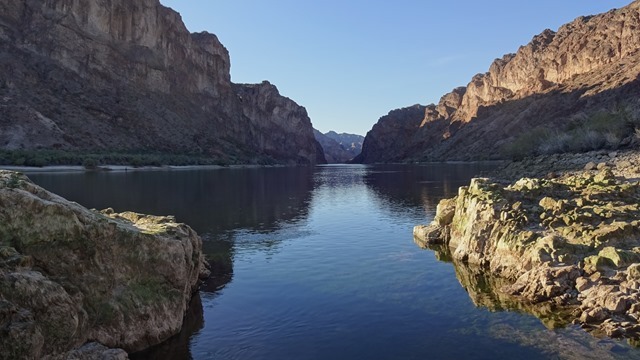 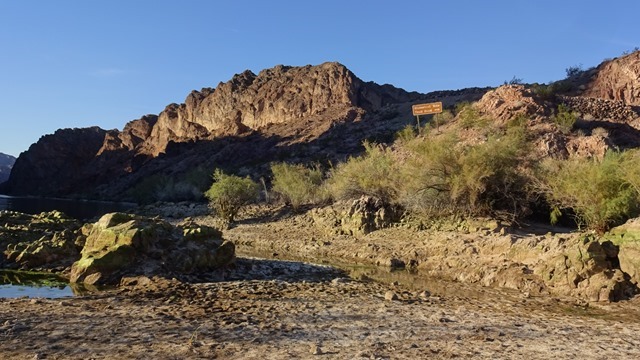 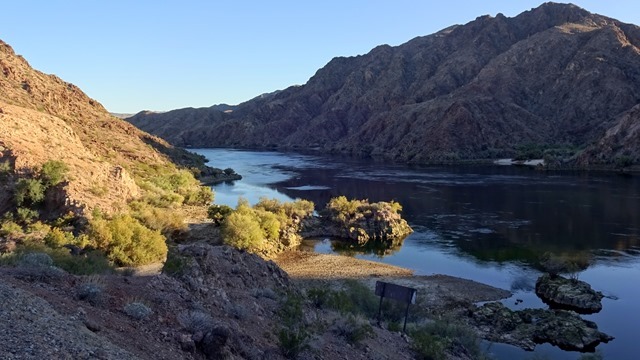 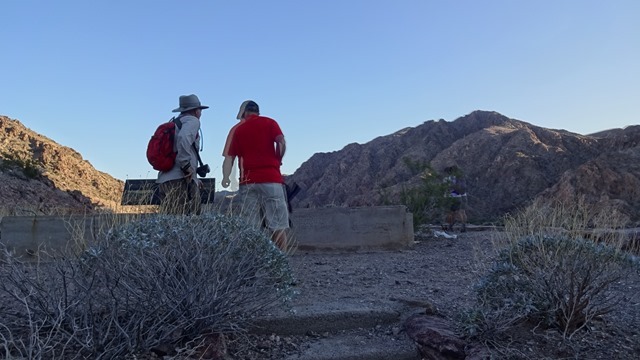 We were at the site of the home of a river gauger, who had the job of taking measurements to determine the volume of water, rate of flow, and silt content of the Colorado River while Hoover Dam was being built. 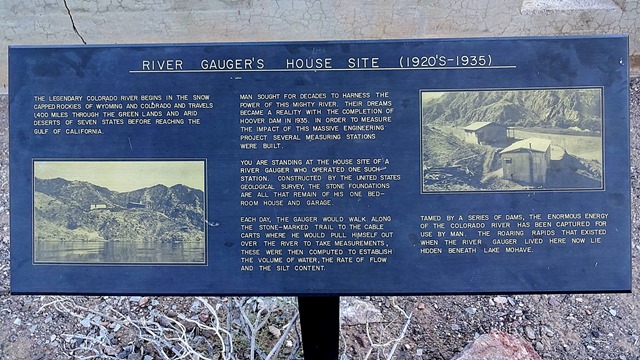 You can see the remains of the catwalk and structure where the cable ran across. 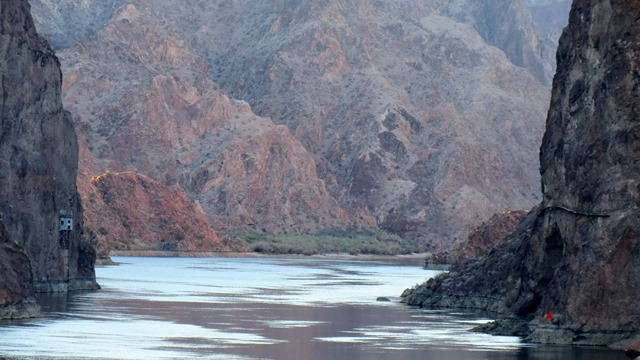 Here’s a closer look. It must have been quite a job. 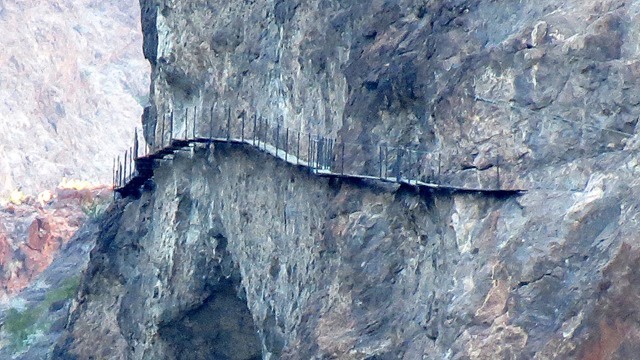 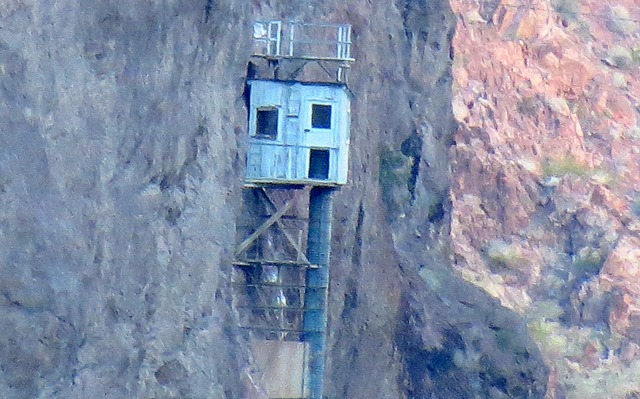 After the hike and drive out on the road, which didn’t seem so bad going back, we stopped for dinner at Boulder Dam Brewery in Boulder City, which looks like a really nice little town, by the way. The beer and black bean burger were good, and we enjoyed our visit with John and Pam. Glad we were able to get together, even for a few hours!

The next day we decided that 289 miles to Yuma was too far for a day, so we hung around Boulder Beach until the noon check-out time, taking a walk and chatting with Mike and Patricia, fulltime RVers whom we had met as boondocking neighbors in Virgin. They were at Boulder Beach visiting family in Vegas and had told us about the campground. It was nice talking with them, and I’m sure we’ll cross paths again one of these days. Patricia is a landscape photographer and her excellent photos can be seen here if you’re interested.

With the low water levels in Lake Mead the “beach” is now a long way from the campground. 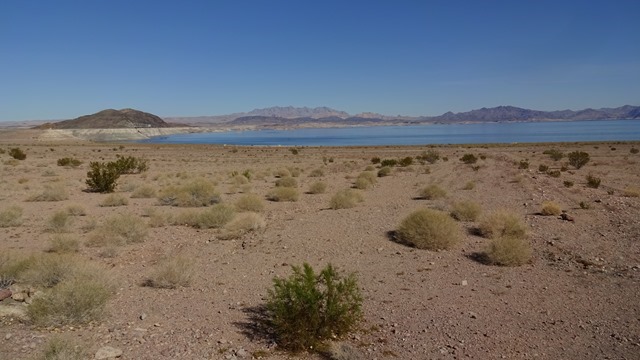 We had an easy drive to Quartzsite, stopping a couple times for lunch and at Walmart in Parker along the way. We arrived at 5 and it was still too hot, around 90, but the sun was so low in the sky we figured it would be setting and cooling off soon. We drove about a mile down Plomosa Road, a very busy area during January, but found just a few RVs scattered about. We found an easy spot to pull off and were able to leave the car hooked up. It was quiet and once the sun set it was a very pleasant evening.

Our nearest neighbors were a good ways off. After all the kids running around screaming at Boulder Beach it was a very peaceful night. 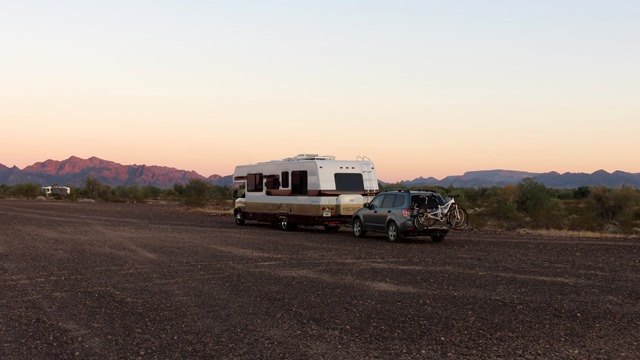 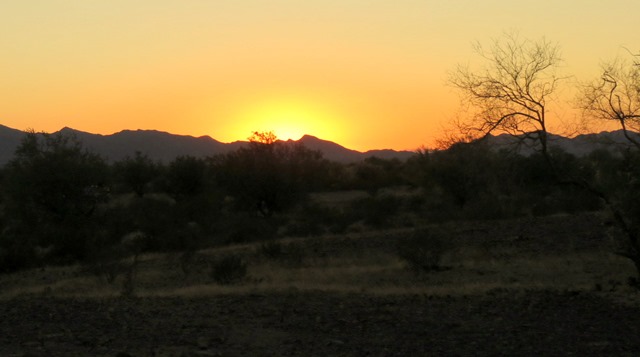 Took these next photos on a walk the following morning. If you’ve ever driven or camped off Plomosa Rd during the RV show in January you know it doesn’t look like this then. 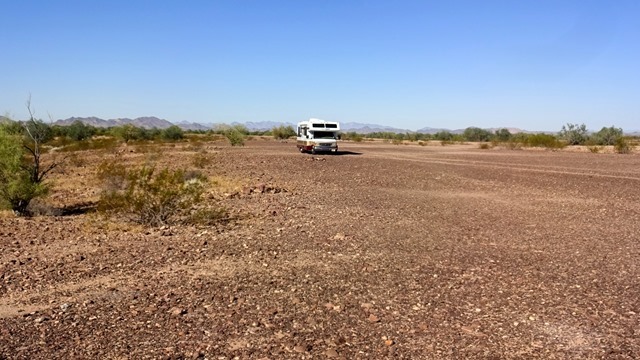 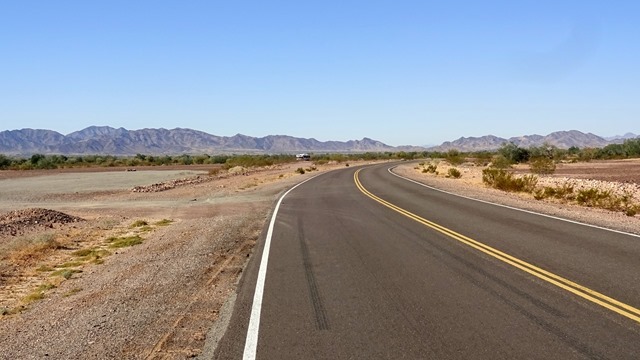 Last Sunday we left Quartzite and have spent the past week in Yuma on the Foothills lot we stayed at in March of 2015 when we had our vinyl floor installed. We came mainly for dental work, a crown for me and an abutment and crown for Jim. Things were a bit shaky there for awhile but after four trips to Algodones I think everything has been straightened out. More about that next time.