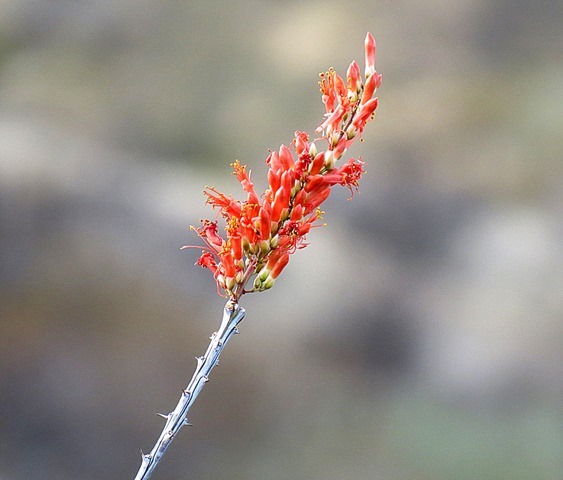 Lone bloom on a leafless ocotillo.

We’ve been back at McDowell Mountain for a month already, which is hard to believe since it feels like we just got here. We had the TadiBrothers backup camera installed last week, but other than looking at our backyard we haven’t driven anywhere yet to see how it really works. We have to change sites today so we plan to take the Lazy Daze for a drive and see what we think. We’ll write more about the installation and how it functions after we try it out while actually driving.

Male Phainopepla, a silky flycatcher that eats the berries of the parasitic desert mistletoe. 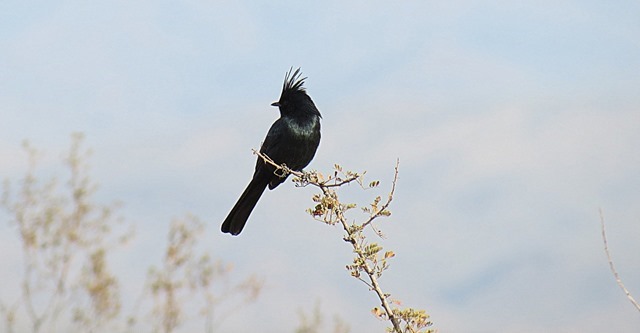 The first replacement in-dash radio we bought did not easily fit so we ordered another one which arrived yesterday. Hope to get it in sometime this week. The whole doghouse and a couple dash panels had to come off to get the old radio out because there was a screw in the back, so putting in this one should be much easier since we won’t have to disassemble everything. It wasn’t such a bad thing, though, since it gave me a chance to do some cleaning in places that rarely get cleaned.

We met Debbie for lunch in Chandler last week and picked up our new Blue Ox tow bar from her. It’s really nice and looks almost new. I’m sure Debbie is happy to have it out of her car. And one of the volunteers here at the park has the same tow bar as our old one so he took it for parts. 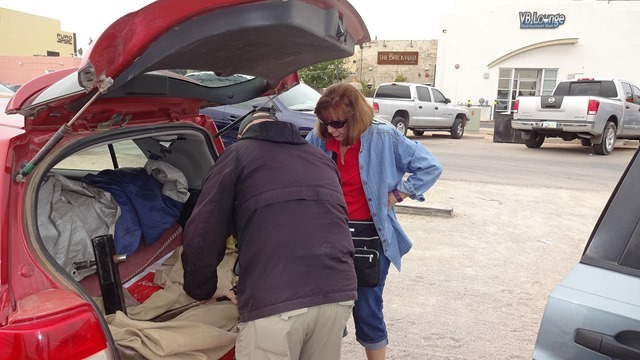 We’ve also been biking, hiking, visiting the gym, and caring for cats. The weather has been incredibly warm this fall but I’m not complaining. Last year was very cold and rainy while we were here so this has been a nice change.

This is Randy and Sunaree’s Airstream with the almost full moon shining down on it. Randy is off working in Georgia so he’s missed some nice sunsets this past week. 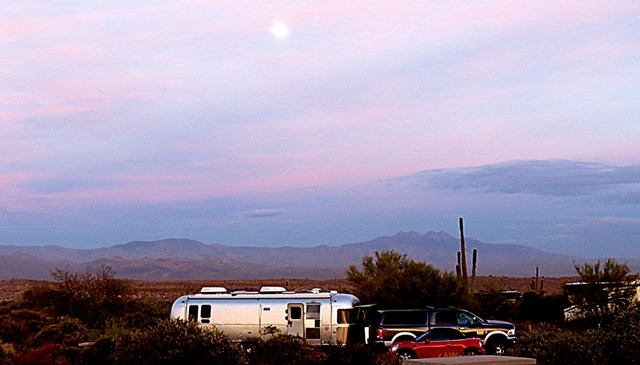 And some nice sunrises. 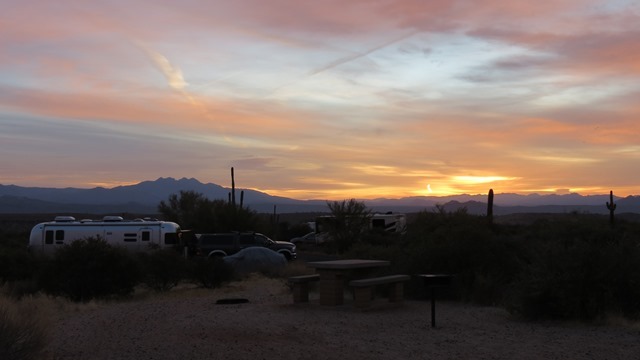 Sunaree and I joined the 8am Friday Fitness Walk in the park last week. I was surprised there were over a dozen people who showed up for the almost 12 mile hike. Most of us were senior citizens, and we finished in 4 hours, a pretty fast pace for that distance. We had to eat our snacks on the run since Kevin, the hike leader, barely stopped for a minute at a time, but it was fun and a pleasant morning for a long hike. That is Sunaree in the beige shirt and pants but I couldn’t get her to look my way. 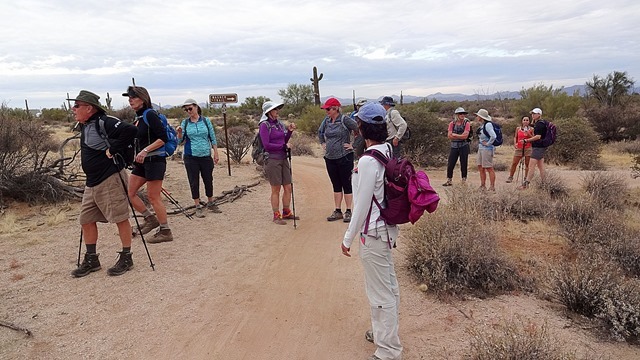 I was impressed that everyone pretty much kept up the pace, but then it is billed as a fitness hike for experienced hikers only. 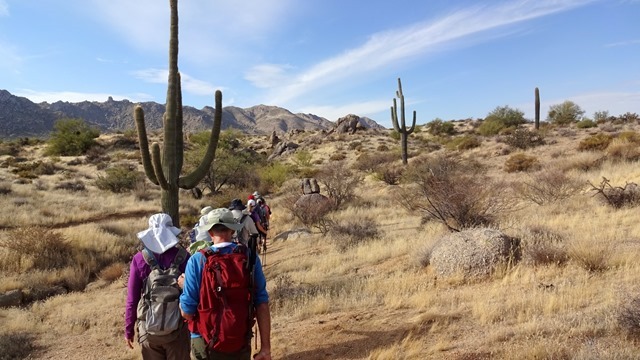 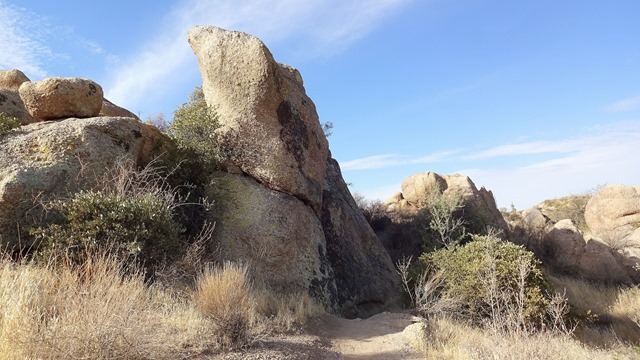 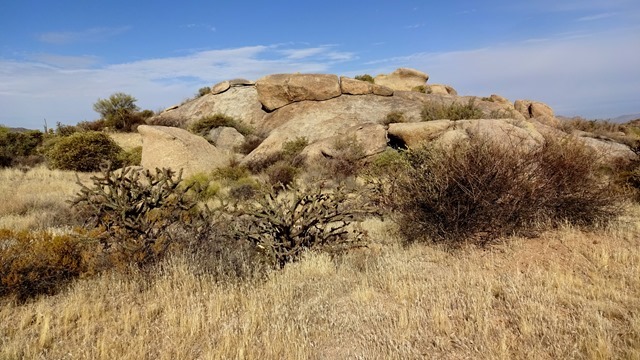 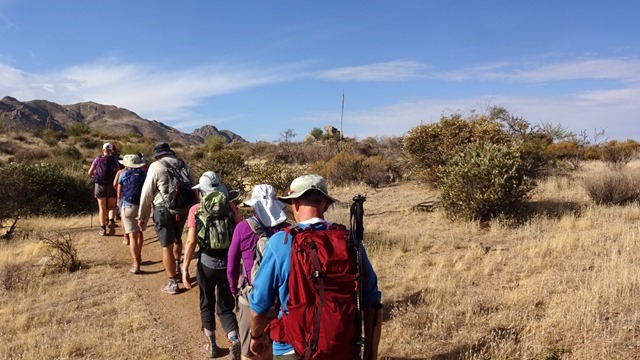 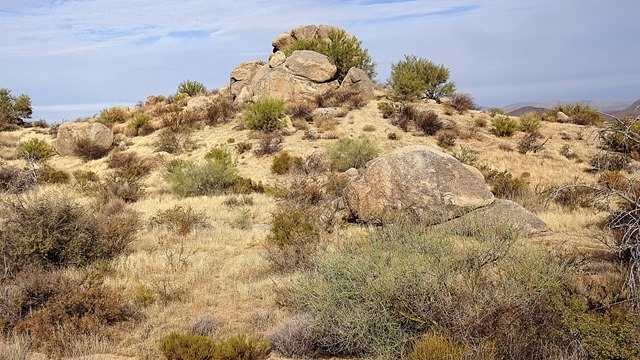 We hiked through a very pretty part of the park with lots of cactus. 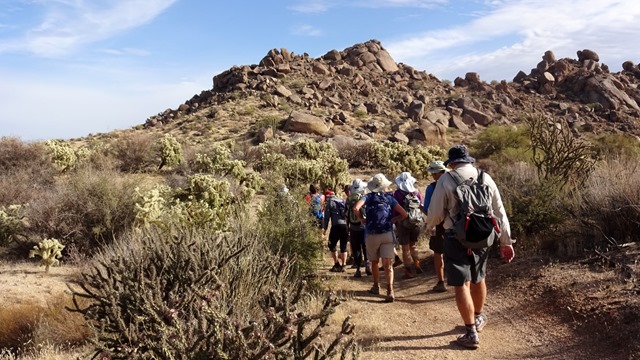 This is chain fruit cholla. 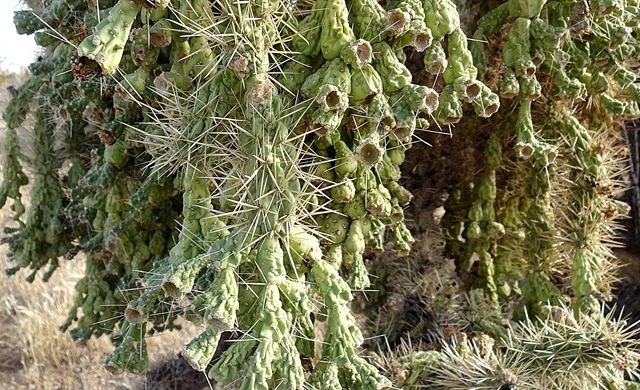 There was a lot of teddy bear cholla, too. Both of these are also known as “jumping cholla” because segments break off easily when brushed against and attach to whatever part of you is unlucky enough to make contact. Jim’s rear has been up close and personal with a teddy bear cholla and he can tell you it isn’t pleasant. 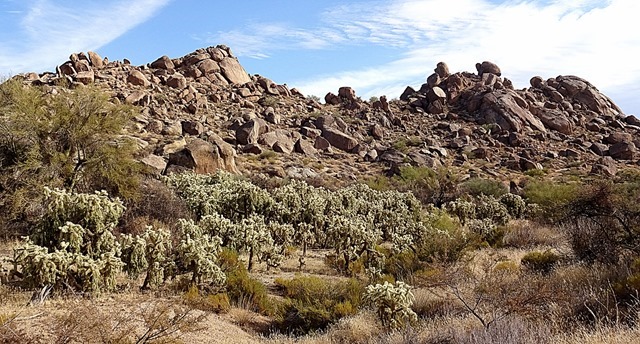 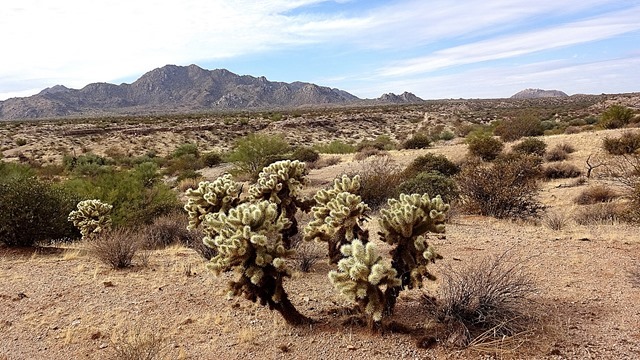 No photos, but we saw a dead coyote, a live jackrabbit, and a scorpion along the way. Also one of the women spotted a plant called a cereus, or Queen of the Night, which looked like a stick coming out of the ground. Apparently once a year in June or July it produces beautiful white flowers which open one evening and close forever the following day. It was a good morning in the Sonoran desert. 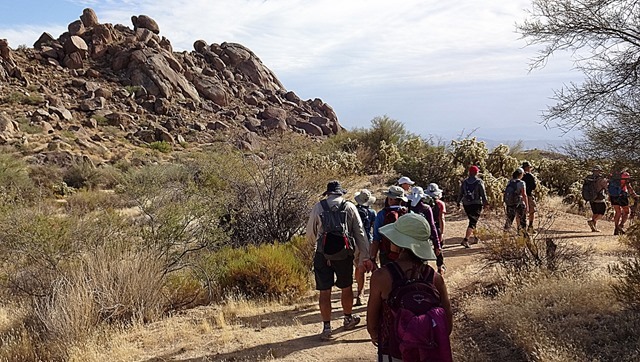 Saturday night we went on a group sunset/moonrise hike on the Lousley Hill trail. It’s a mile climb up to a ridge with great views. We had some cloud cover so missed the moon as it rose over the mountains but we did get to see it a bit later. 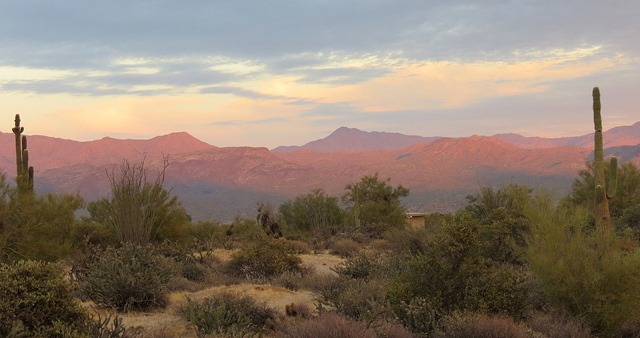 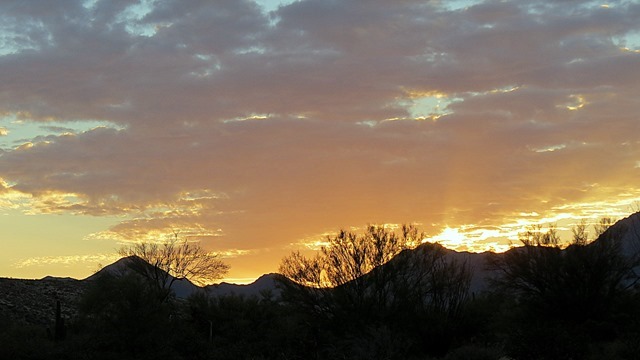 The moon is there somewhere. I think this is the third time we’ve gone on a moonrise hike here at McDowell and it’s always been cloudy. 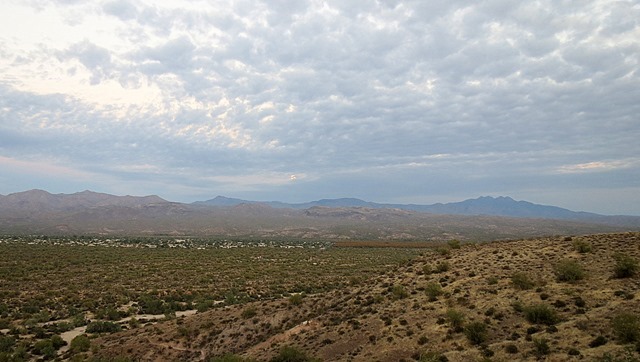 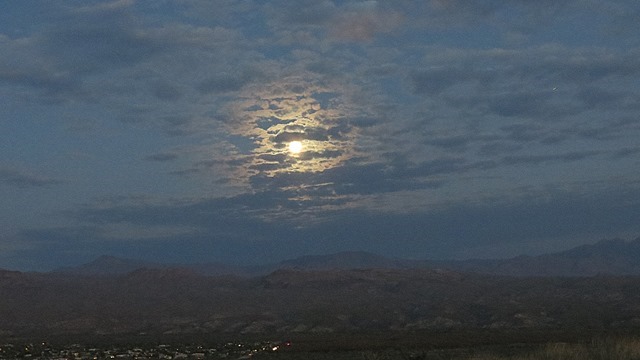 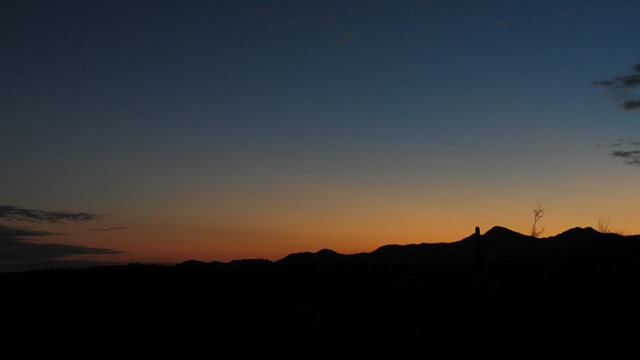 The camera battery died just after I took this. Last night there were no clouds but we forgot to go outside until the moon had already risen. 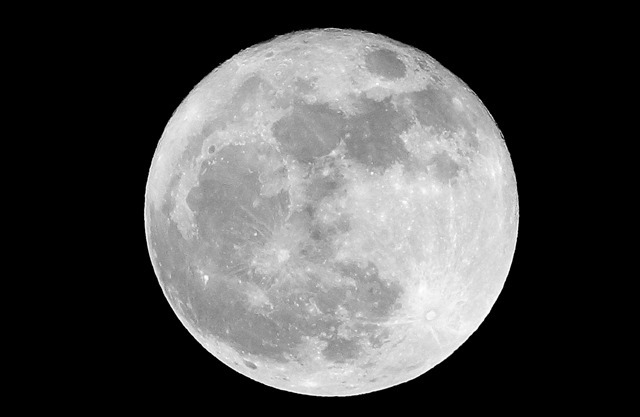 Just one cat photo this time. This is Big Daddy, an FIV positive feral cat who used to hang out around the old Fearless Kitty building for food and water. Before the move last year he was trapped, neutered, and is now an official Fearless Kitty. He would not let anyone near him for many months, and last year he hissed at me every time I got close to him. Time and more contact with humans and his two other FIV + cat roommates have really changed his personality, and much to my surprise he rubbed on my legs and let me pet him for a long time last week. It made my day, and is one of the many reasons I love volunteering here! 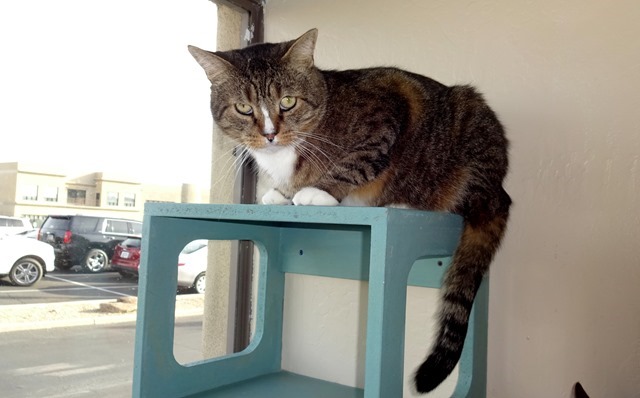