We were finally able to test out our new backup camera, something we should have installed years ago but it was one of those things we just never got around to. Had Tadi Brothers not reached out to us offering a camera for an honest review it would probably still be on our list. 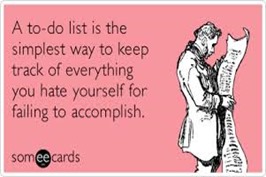 We decided to go with a wireless camera since it would have been a lot more complicated to run video cable from the monitor that is attached to the rearview mirror to the back of the RV where the camera is mounted. The camera, transmitters and monitor still need to be tied into power.

The easiest place to mount the camera with access to 12 volt wiring was just below the center marker light. As is generally the case with Lazy Daze the clearance light was secured with more polyurethane caulk than you could imagine. In fact, the base had to come off in pieces but luckily we had a spare. 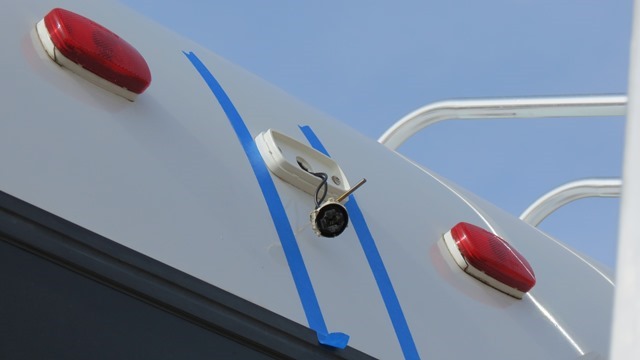 We had the system professionally installed although someone much handier than I am could do it themselves. Here is Scott drilling a big hole in the back of our Lazy Daze, OMG, no. Seriously, Scott does great work. You would be amazed to see what he has installed in his own motorhome and how neatly it was done. 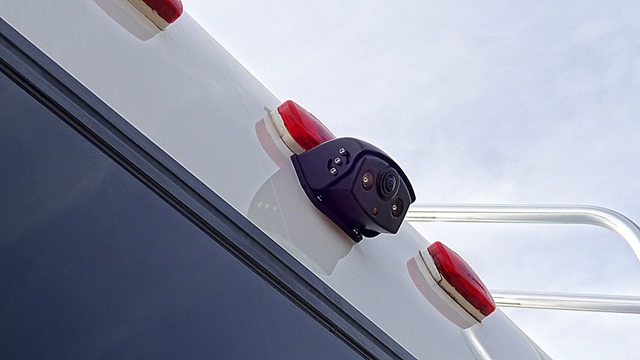 There is a nightlight switch under the cabinet above the bed, so Scott was able to wire the transmitter and camera into that. 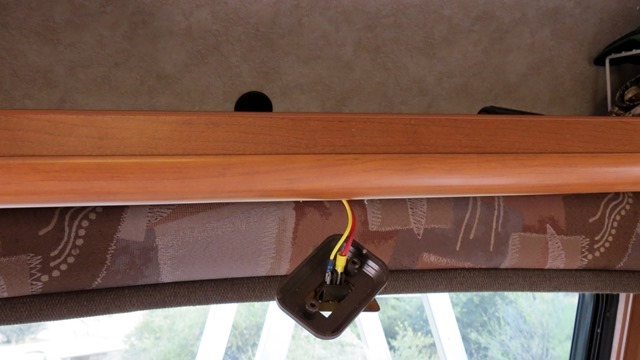 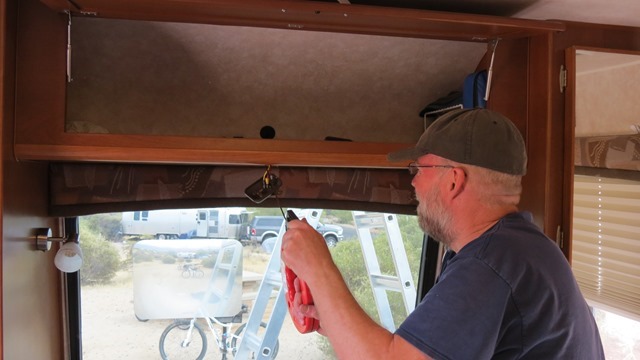 Transmitter neatly installed and not in the way of the clothes we store in this cabinet. 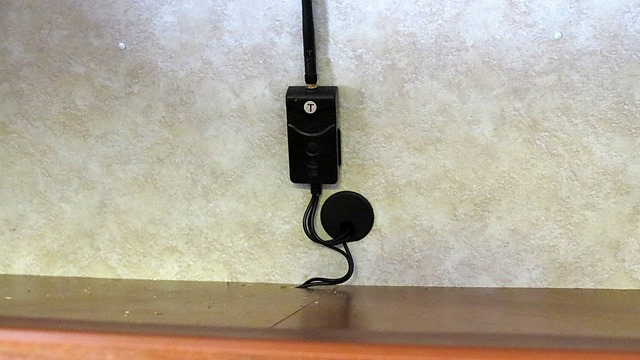 Up next, he is finding a power source and a route for the wiring for the 9” monitor. We decided to power it from the 12v switch for the TV antenna amplifier. That turned out to be the one that cuts off when the engine is started but he found an easy way to disable that feature. 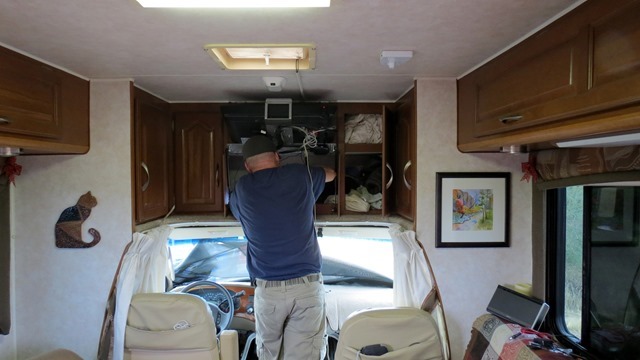 All of Scott’s work is nicely protected with wiring loom. The stray wire you see is something I did. Figures, doesn’t it. This is the transmitter for the monitor which is normally hidden by the TV. The transmitters are supposed to have a 95’ range. 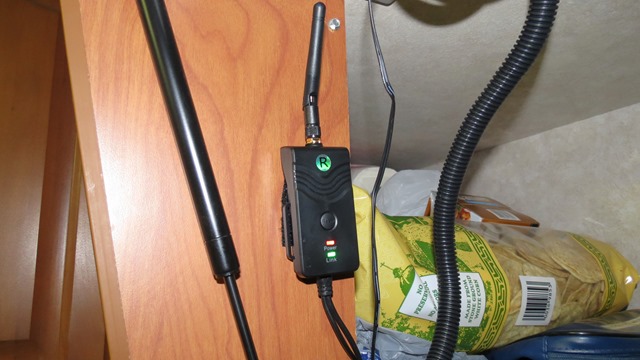 Scott went out to adjust the camera angle while we watched him on the monitor. 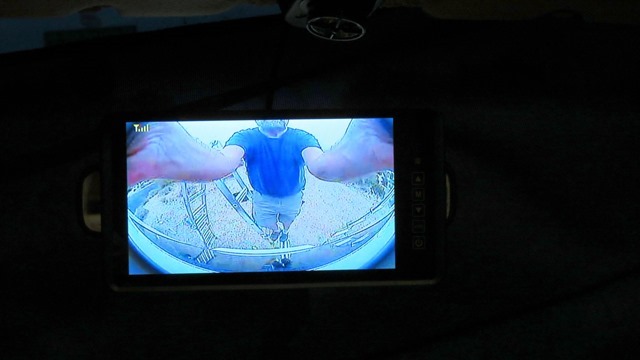 The two images that follow give a good impression of what it looks like. The camera provides a 180 degree view. When we were parked I thought that might be too much, although Scott had installed one with a 170 degree view in his RV which he liked. After driving with it I really do like it. That said, objects are definitely closer than they appear. Since the LD roof is curved in the rear, the white at the bottom of the screen is actually the rear of the rig. Lower in the center you see a bike rack. 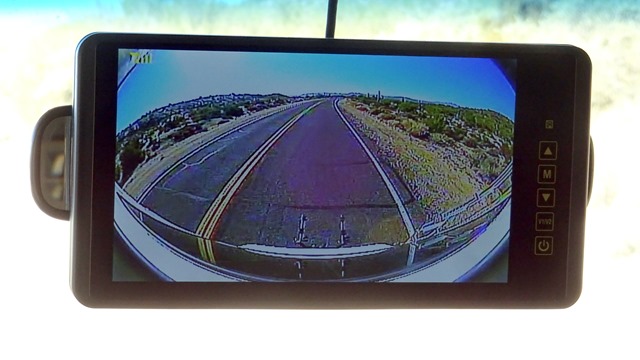 The image looks a little grainy and washed out at times depending on the sun, but since we have nothing to compare it to that may be normal for all of these cameras. It was great to have when I backed into our new site last week. I was able to see the curb on both sides and the concrete berms at the back of the site. 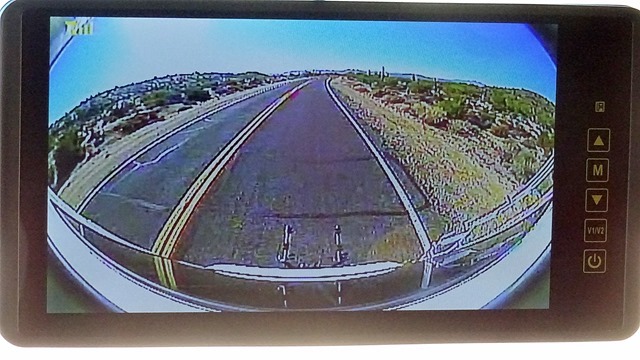 As you can see below the 9” LCD monitor clips to the rearview mirror, which was nearly useless anyway. I was worried that it was going to be too big and be an annoyance but in our test drives it proved not to be the case. If it were an issue I would probably glue the mirror higher up on the windshield. We will see.

In the limited short distance driving we have done the monitor hasn’t vibrated much on the mount. It really does feel as though it weighs nothing. The mirror is much heavier by itself. 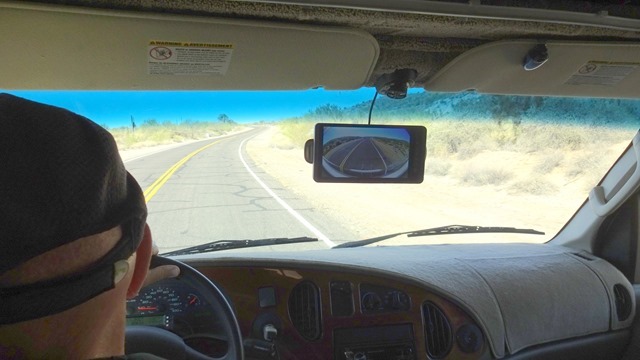 When we are getting ready to pull out we have to turn on the nightlight switch in the bedroom, be sure the antenna switch is on up in the entertainment center, and press the power button to the monitor. We intend to run it on all the time when driving. The camera has infrared capability for night viewing which comes on automatically. A plus for the 180 degree view is we should see any aircraft overhead should that be important. Seriously, it should help with lane changes keeping in mind objects are closer…

Regarding Tadi Brothers, we were fortunate that they contacted us. When we got the email I passed it along to Scott and it turns out that is who he has used and I trust his advice. They were very helpful and worked with us on what we wanted and on how we needed it shipped.

All TadiBrothers products have a 30 day 100% money back guarantee and a 1 year warranty. They also have a 24 hour tech team hotline for any questions or problems you might have.

So far we really like having this addition to the Lazy Daze but we’ll get a better feel for it once we get back on the road next month.