Back to the Real World

We left Banff a week ago, and although we had originally planned to stay in Canada longer and check out some other areas on the way back to the US, the weather was not looking promising, and Jim was concerned about our electrical problem and wanted to get that looked at. The day before we left he was able to make a call using Google Voice from Tim Horton’s WiFi, and got an appointment at Truline RV in Spokane Valley, WA for Thursday afternoon. They had repaired a problem with our SMI breaking system back in 2014 and we were happy with their work, so we decided to give them a try again.

We knew there was a Cabela’s less than 10 miles from the shop in Post Falls, ID, which is where we stayed before, so we decided to make the 355 mile drive in one day, barring any issues getting through customs at Kingsport/Eastgate on the way back. All went fine and it was an easy drive with little traffic until we hit Coeur d’Alene at rush hour.

A couple parting shots from the Canadian Rockies. We were happy to have a nice weather day for the long, scenic drive south on 93 and 95. 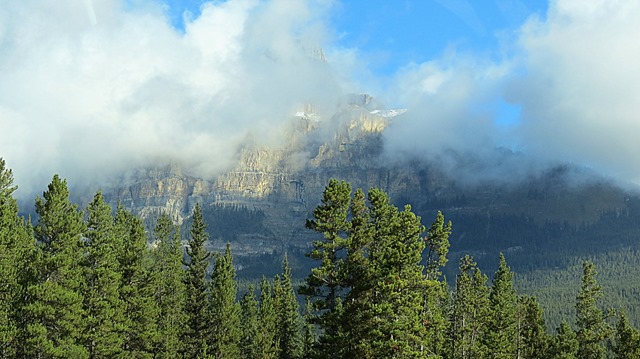 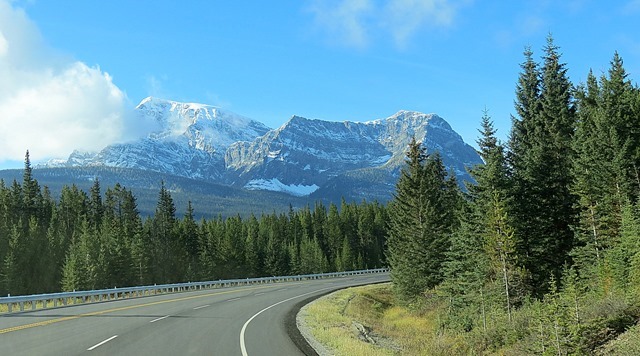 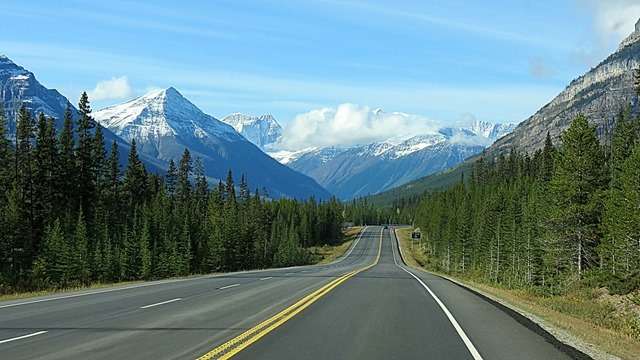 There were only 5 or 6 other rigs overnighting at Cabela’s but I forgot to take a picture until the next morning after everyone left. Since we were here last time a Walmart opened up just a quarter mile from Cabela’s so there were more RVs parked over there. This is a fairly quiet parking lot and we were able to get in a few miles of walking from here. 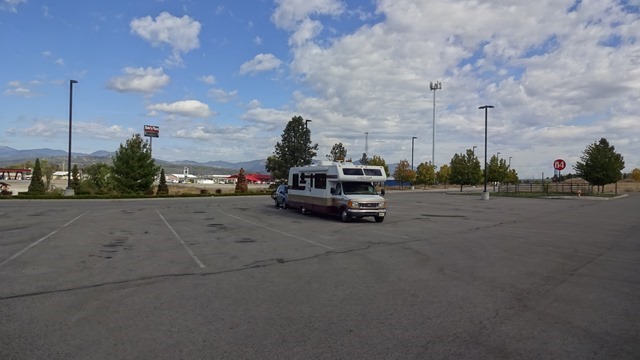 We left Cabela’s around noon and stopped by Walmart for a few things, ate lunch, and then headed over to Truline around 2:30. The owner of the shop came out and checked our circuit board, converter, etc. and thought we just needed a new 15 amp breaker. Jim had bought one in Banff but Chuck and Jim were unable to remove the old one and didn’t want to pull too hard and break something when we needed power. While inspecting everything he pulled out the 20 amp breaker that AM Solar installed for us in July, but had trouble getting back in. It turned out it was the wrong breaker and the opening for the clip was too short. It was one that Jim bought at Home Depot in Oregon but didn’t realize was the wrong one. Luckily there was a Home Depot a few miles away so we hopped in the car and picked up the correct one. It snapped on easily, so now we are good to go. The shop owner said everything else looked good and there was no evidence of damage so we’re hoping for the best.

We went back to Cabela’s for another night after we left the shop to figure out where we would go on Friday. Jim wanted to stay in the area and be plugged in to make sure everything was working okay, just in case we needed to return to Truline on Monday. It wasn’t easy finding a vacancy for the weekend, but there was a site available at Coeur d’Alene RV Resort a few miles from Cabela’s in Post Falls. The reviews were not great but we got an end site with a colorful maple tree, and it served our needs. 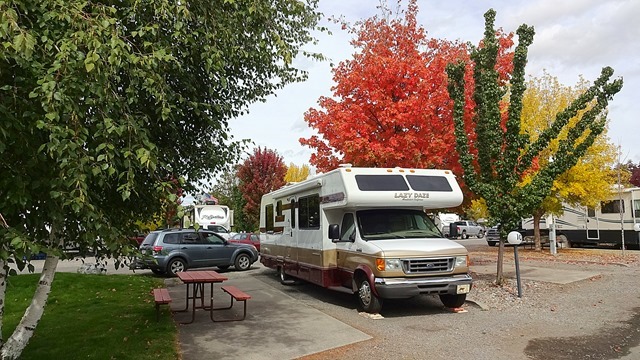 After we got settled in on Friday we drove 20 miles to Trader Joe’s in Spokane, then came back and worked out at Anytime Fitness, just a mile from the RV park. It was over a month since we visited a gym, and we hope to try and get back on track.

After a few loads of laundry on Saturday we drove to Riverstone Park in Coeur d’Alene and took a walk on the Centennial trail, which follows the Spokane River. In 2014 we rode bikes on the other end of this same trail, but biking didn’t sound like fun this time since it was in the 50s, cloudy, and very windy. 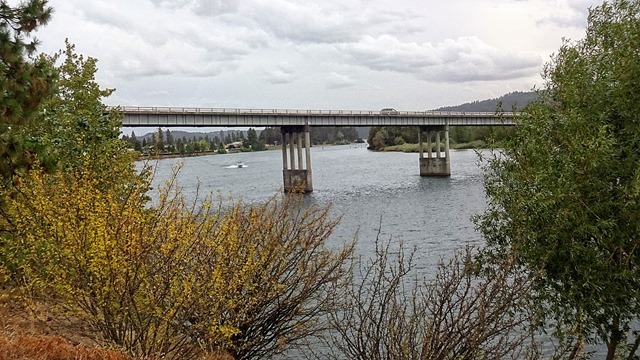 We passed by the sewage treatment plant and got a kick out of this sign they have posted. Believe me, with the smell emanating from the plant no one would ever know! 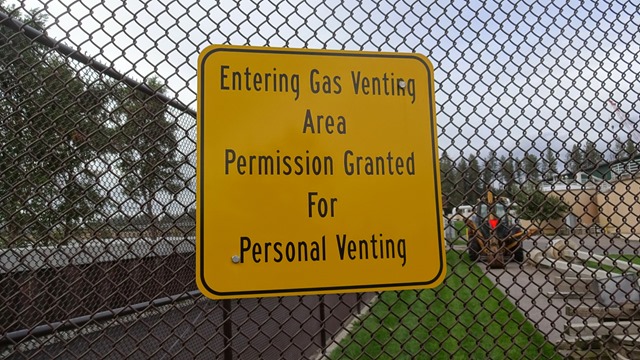 They are also growing pumpkins using fertilizer made from the sewage sludge. It must be good stuff because the pumpkins are huge. 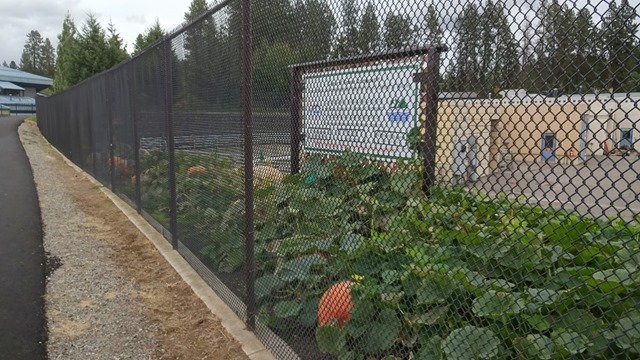 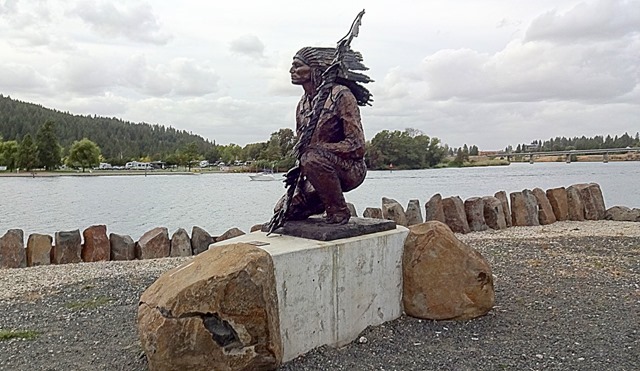 These plastic bags contain knit gloves, scarves, and hats, free for the taking. 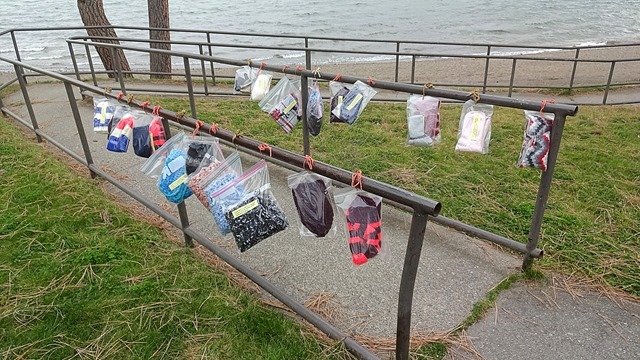 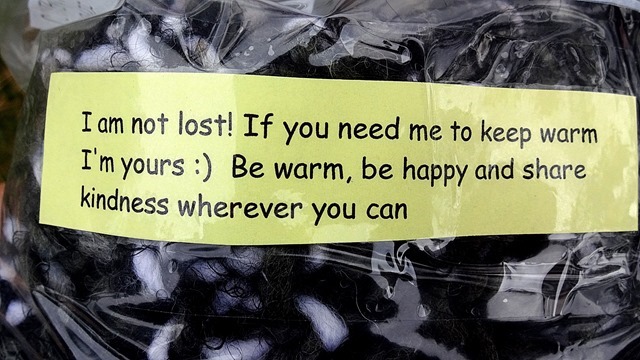 We saw a tent and could hear music so we continued on to check it out. 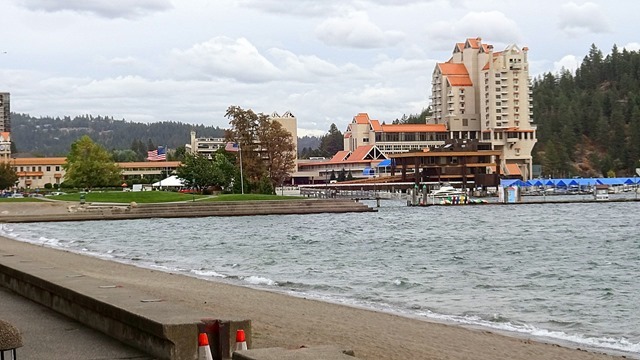 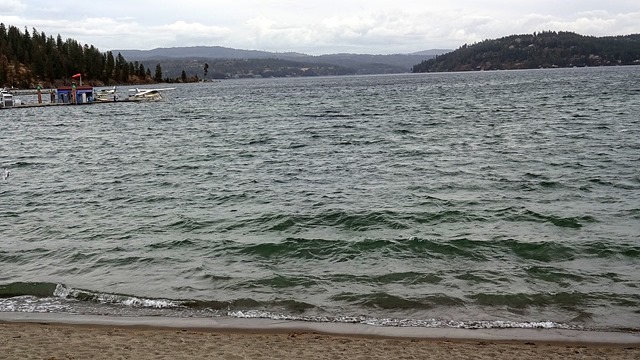 Found out there was a 120 mile bike ride, and some of the riders were still coming through the finish line. It would have been a tough ride in the wind. 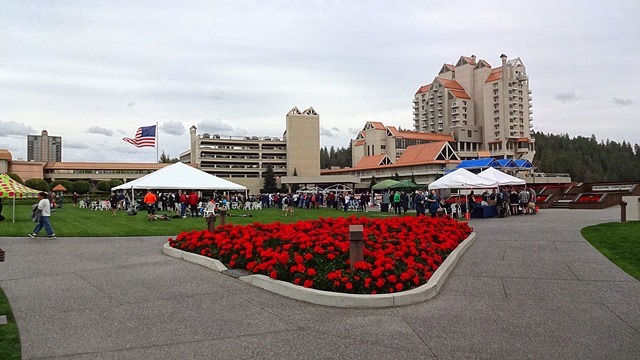 At 3,300 feet long and 12 ft wide, the Coeur d'Alene Resort Floating Boardwalk is the longest floating boardwalk in the world and encircles the marina. 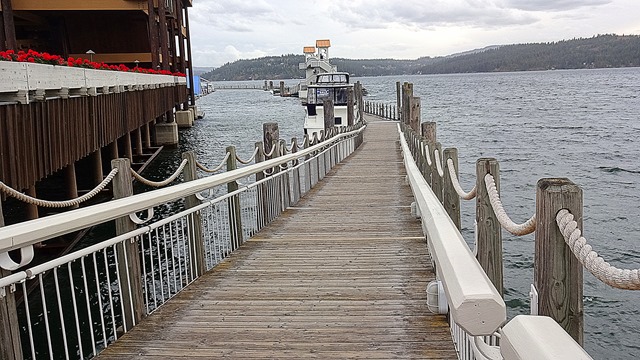 There’s an interesting 60’ long arched bridge along the way. 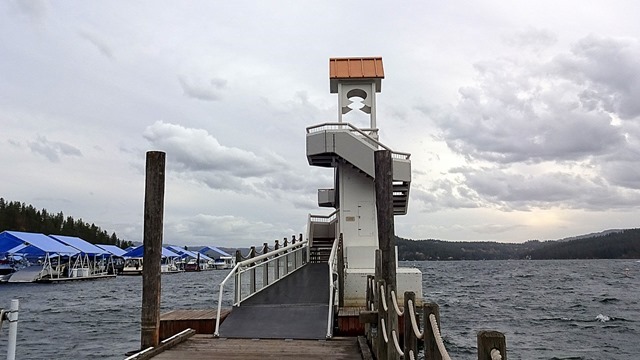 You have to climb the the stairs to cross the bridge and get to the rest of the boardwalk. 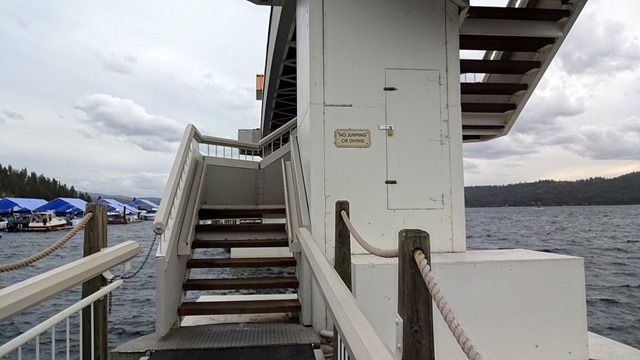 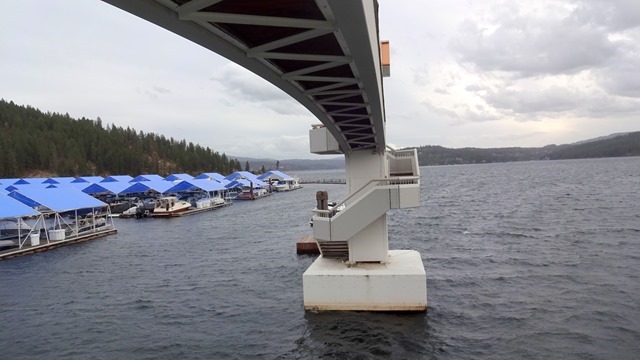 Not many boats for a Saturday, but it wasn’t the best day for being out on the water. 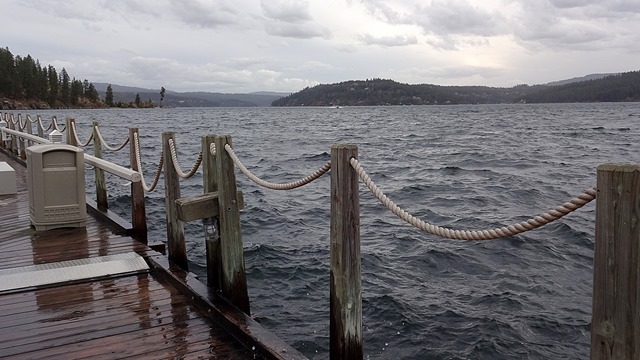 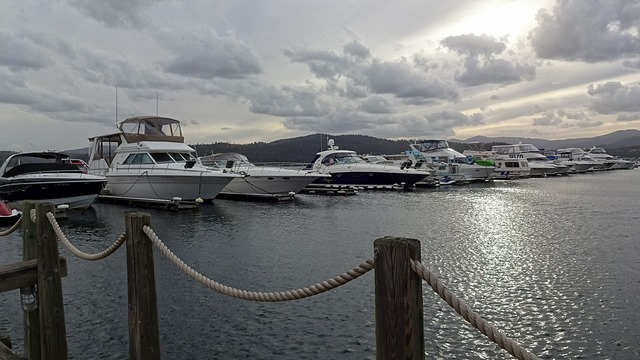 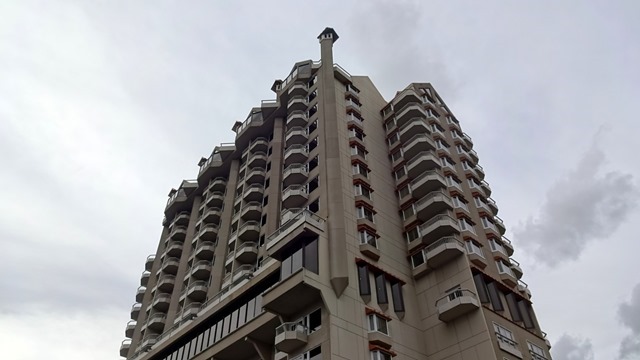 We passed some lovely homes along the waterfront. 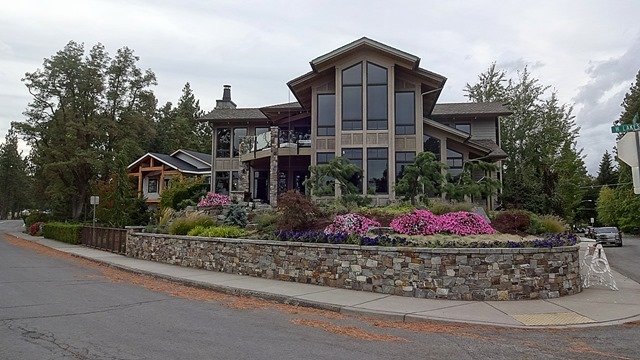 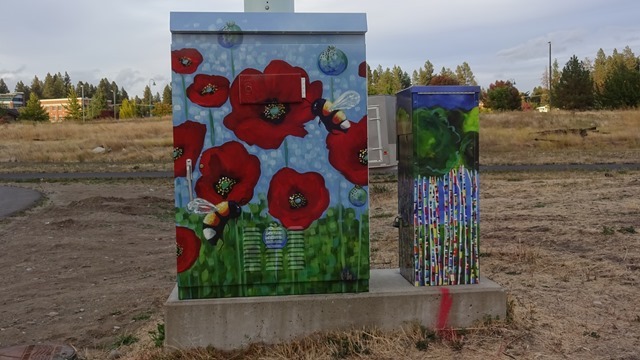 Coming back we took a detour along another public boardwalk in front of more waterfront homes. It was a good 6 mile walk, but would have been better if it hadn’t been so windy. 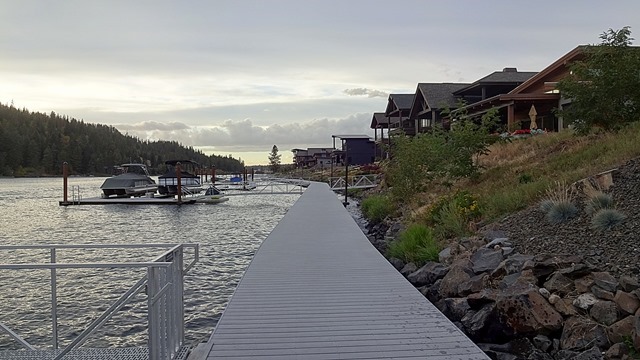 On the way home we stopped at Selkirk Abbey Brewing Co, which specializes in making Belgian beers. Chatted with a nice couple at the bar from Spokane Valley and had an imperial stout and a barrel aged barleywine, both of which were excellent, but too high in alcohol at 11.5% ABV. Good thing it was less than three miles from the RV park. 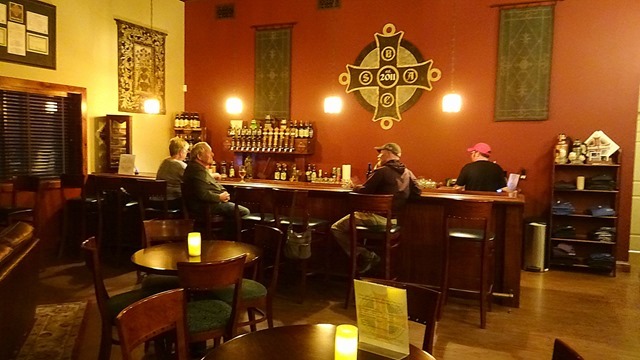 Since we had no tripped breakers and no overheating, we left Coeur d’Alene on Sunday and drove 185 miles to Missoula, MT, where we’re spending a week so we can get mail and a couple of things from Amazon. Also watching the weather and trying to figure out where to go next, although there is no doubt it will be south.