"Dreary Erie" Lived Up to It's Nickname

After leaving Middle Bass Island we drove on to Erie, PA where I was born and raised. Erie has always had a reputation for being gloomy and dreary, and during our ten days there it upheld that reputation. We had rain most days except a few, so not only was it dreary, it was very steamy with humidity. As expected, my brother said that since we left the weather has been great.
We spent 10 days in a decent Airbnb near Presque Isle State Park, what Erieites call "the peninsula". It's a lovely park that makes Erie worth visiting. We did several walks there in between showers and thunderstorms. 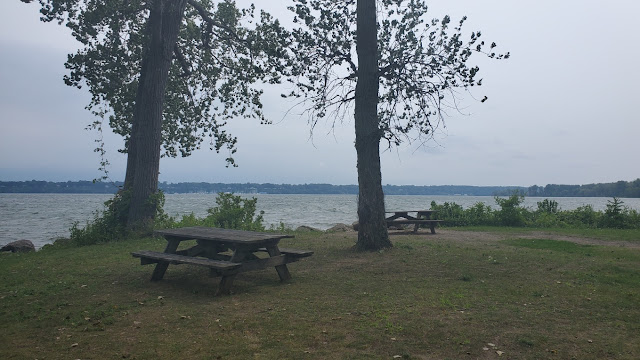 But of course the main reason we visited was to see friends and family. It's not quite the same since my dad and friend Joann died, but we enjoyed seeing my brother and his family. We had a fun dinner and good beer at The Brewerie downtown.
We went for a walk at the peninsula with my childhood friend Denise and also walked with her at Asbury Woods, a pretty area with hiking trails. 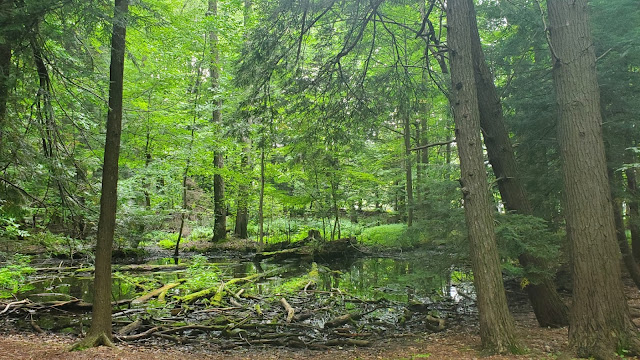 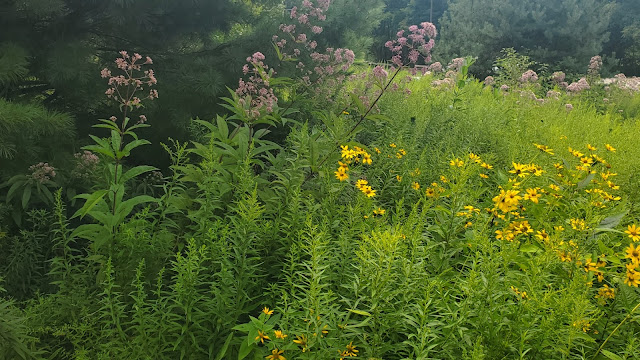 One day we spent a long time trying to find my parents' headstones at the cemetery where they are buried and finally succeeded. I was amazed by the number of names I recognized that were relatives or parents of old friends and classmates. 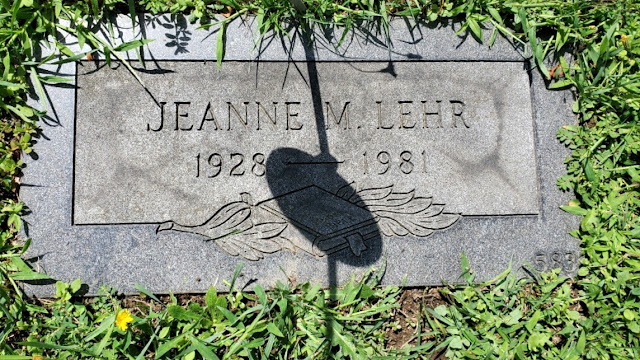 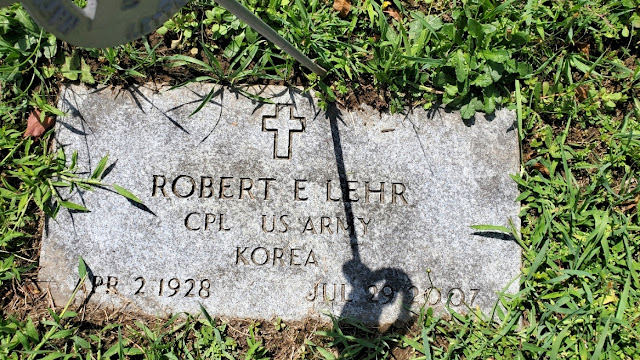 We enjoyed wandering the cemetery so much that we walked around another one on a different day. A large number of Polish immigrants landed in Erie so we found the names entertaining.

There was a neighborhood music festival with live bands playing at five different parks around town one Saturday. We went to Perry Square downtown since there was jazz. Fortunately, it was one of the nicer days with no rain. It surprised us how few people were there, but maybe with five stages there was better music elsewhere. 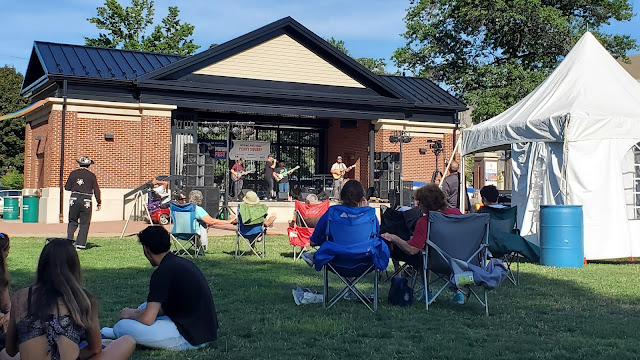 After we got tired of sitting and listening we walked down State Street to the marina on the bay to check out the boats. 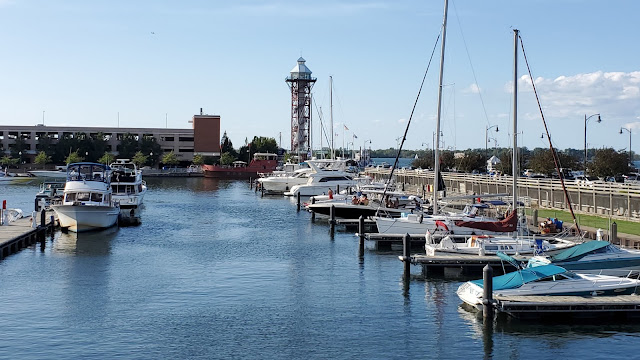 Here are a few more photos from Presque Isle. I realized I didn't take any of Lake Erie, just the bay, since it was gray and unappealing when we walked on the lake side. 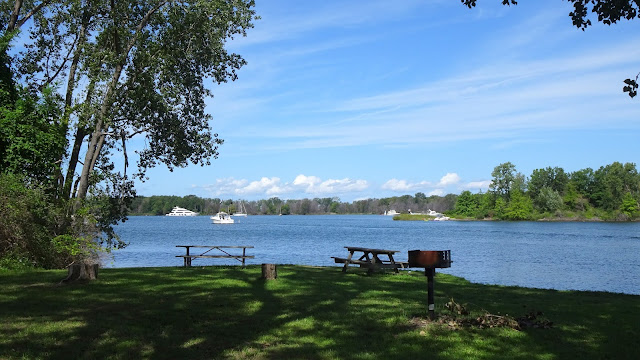 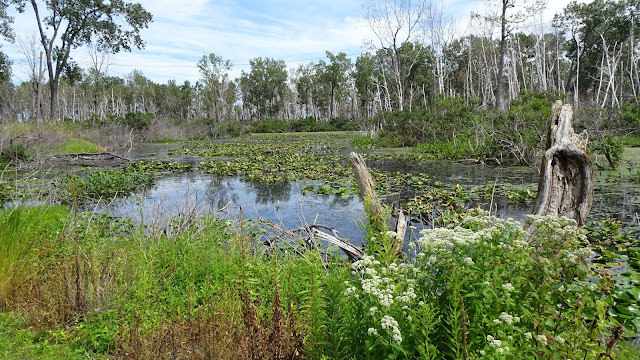 We were happy to see that the houseboats are still there. We never knew anyone who owned one but it always seemed like fun since people got to stay in the park even after it closed for the day. 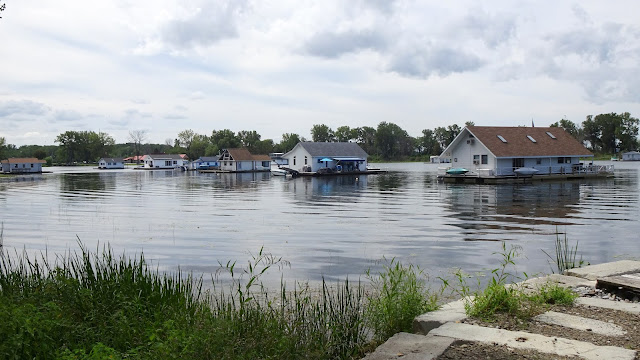 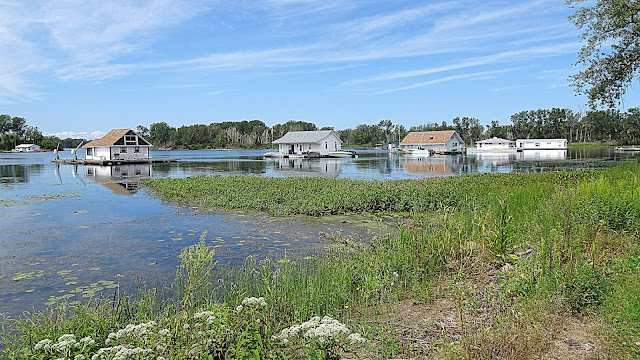 During our stay Jim thought that perhaps we should consider Erie as a place to live so we investigated some possibilities. From talking with friends and family there, they are surprised at the home price increases that have taken place since Covid but to us they were minimal compared to most other places. I just don't think we could tolerate the cold and snowy winters despite the benefit of having family nearby.
That's about the extent of the excitement that took place in Erie. We also had bittersweet visit with Joe, my friend Joann's partner. She was killed on her bike back in 2013 and this was the first time we'd been back since her accident. It was sad enough visiting Erie after my dad died but with Joann gone it really felt like something was missing. But, life goes on, and since we can't change things we adapt. 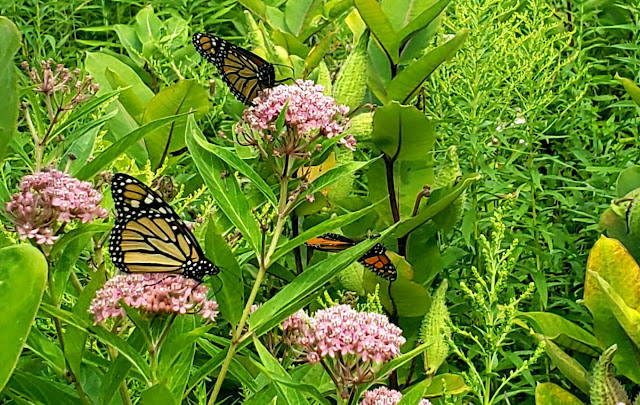 Next up, changing direction and a new state for us.
Posted by Jim and Gayle at 6:10 PM