It’s been another busy week. Went to Portland Wednesday for Jim to have his YAG laser capsulotomy on his right eye. This is a very common procedure that needs to be done in some cases after cataract surgery. The posterior capsule of the lens that’s left in place after the cataract is removed becomes cloudy, and they just do a few zaps with a laser to make a clear opening. No big deal, he is doing fine and his vision is better. Now he has to decide if he wants the cataract removed in the left eye while we are here. Big decision since it is borderline at this point.

Jim’s bike fork came in Wednesday afternoon, so he attempted to finish putting his bike together. Unfortunately the dealer we got them from didn’t include a manual for the headset, so not knowing exactly which model it was, he tried putting the pieces together but could never get the headset tight. After several calls to the dealer, who mistakenly told Jim a certain piece was just an extra one, he was still unable to get it right. Yesterday morning he got a call from the guy at 8am to tell him he was sorry, but that part did need to go on. It took only 5 minutes to get it right after all the pieces and parts were put on correctly. Needless to say, Jim was a bit frustrated! We rode again last night, though and all is well. His Corvette blue Rans Dynamik is pretty sharp looking! 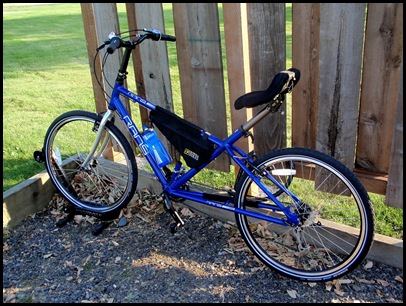 Yes, we did work this week. Yesterday we helped clean a big gazebo at Fort Cascades, then in the afternoon worked on cleaning out the waterfalls area near the rangers office and fish hatchery. The previous volunteers did a great job on the upper part and we are now working on the lower area. The big problem surrounding the pond and falls are blackberry vines or canes. They grow to be huge, and spread and take over everything. They are considered to be an invasive species so Bonneville Dam is trying to eradicate them. Would not be so bad except for the giant thorns all over the canes. We look like we lost a cat fight, with all the scratches on our arms and legs!

Today we walked several of the trails and picked up trash and did some trail maintenance, just cutting down limbs and more blackberry canes that were encroaching on the trails. It was in the 70’s today so a perfect day for being outside. Tomorrow we will do more of the same, then we have a few days off. Tonight the volunteers are having a pot luck picnic, so as you can see, we are pretty busy here! It’s been great fun so far and we couldn’t have picked a prettier place. 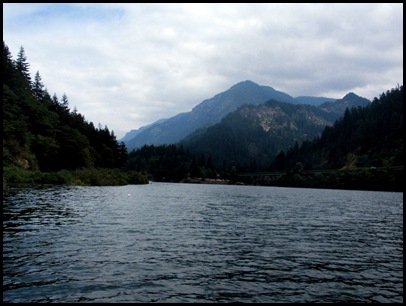