The above picture  is actually Long’s Peak, the trail we really wanted to do (in our minds), but since it is 8 miles up and they recommend you start at 3AM, we decided to take a shorter hike to Twin Sisters, a pair of rugged peaks that you reach by a 3.7 mile trail. It is also uphill all the way, and climbs 2,338 feet to a height of 11,428 feet.

It was a series of wooded switchbacks a good part of the way, but every once in awhile there were clearing through the trees. 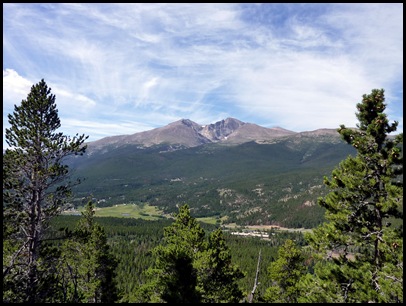 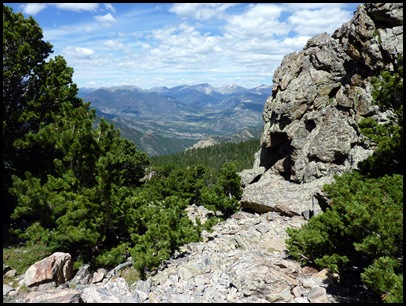 It was one of the hardest hikes we’ve done just because of the altitude. We both thought we were having a heart attack or stroke most of the way up, and we took  it really slow. About three fourths of the way up, we got above tree line and the trail, which was already pretty rocky, just became piles of rock. That is the trail in all of these photos. 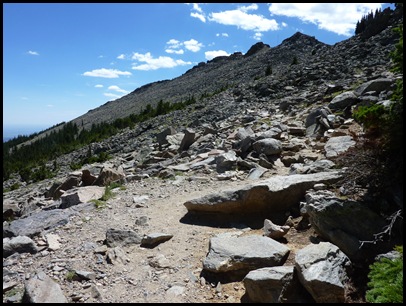 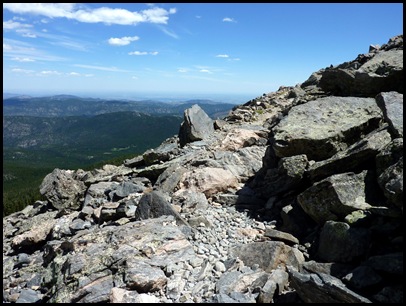 We took a 45 minute break at the top, eating lunch and talking to a ranger and some other people who came up after us. She said one day a week they get to “roam”, which means they can wander around the park. She chose to hike Twin Sisters that day. She said working for the Park Service was a “really good gig”. We had to agree. It would have been nice to get paid to take that hike! It was quite a commanding view at the top. 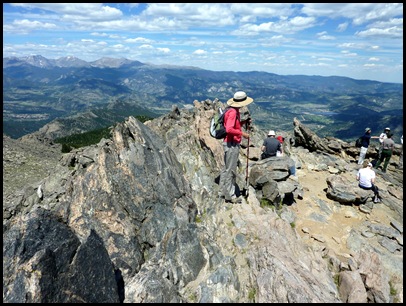 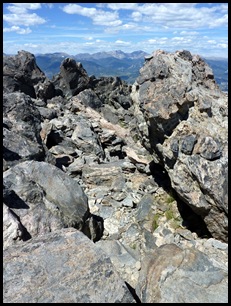 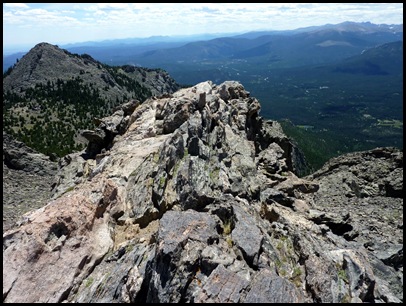 There was also a radio tower between the two Sisters, powered by solar. They use it to aid in rescues. Glad they didn’t need it for us that day! 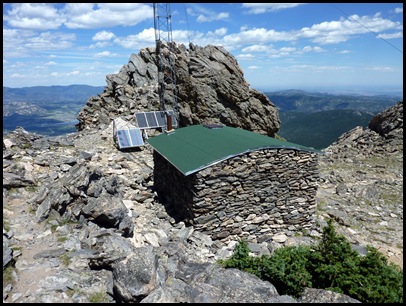 It took us almost as long to get back down, since we had to watch every step, but we made it tired and sore, and were glad we went.

We met a nice couple at the campground from Fort Walton, FL, an hour from Pensacola. They drove to Colorado so he could ride the Leadville 100 last Saturday. If any of you are familiar with mountain biking, you know it is supposed to be one of the hardest mountain bike races in the country. This year the winner was Levi Leipheimer (who used to ride on Lance Armstrong’s road bike team). He finished in 6 hours and 16 minutes. Amazing! Our neighbor actually finished the entire course, although it took him 13 hours! We were impressed. Then they hiked at least a 7 to 10 mile trail in the park every day this week. And they were probably in their 40’s.

Today we’re moving on to a forest service campground south of Estes Park for the weekend. We scoped it out the other day and half of the campground is first come, first serve, so we think we should be able to get a site before the weekenders arrive. The Colorado kids went back to school this week (yeah!) so there was no one there during the week. Hope the rest of the schools start soon.