Let There Be Sun 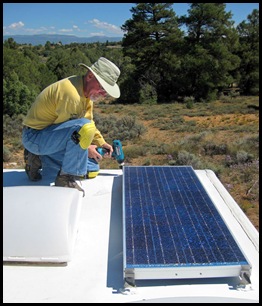 We are still here at Heron Lake, and after a trip to Chama for a few supplies, Andy and Jim got our new cracked solar panel mounted. Between screwing the mounts into the roof, high bond tape, and lots of sealant, it shouldn’t be going anywhere. After numerous phone calls and discussions, Jim thinks he will be able to wire it into one of the other panels by himself, with a little guidance from a few Lazy Daze friends who will be at the Balloon Fiesta. So he ordered the wiring and a couple other parts from AM Solar, which should arrive in Albuquerque before we do. We’re anxious to see if it will work, and since we are dry camping at the Balloon Fiesta, will get a chance to see how much difference it makes. We really appreciate Andy’s help, and enjoyed visiting with him this week.

We got an e-mail this week from Frank and Chris, who also full-time in a Lazy Daze.They are staying just down the road at El Vado Lake State Park, which we wanted to see anyway, so we took a drive there to visit them. We met them last year in Oregon after we left Bonneville Dam and it was fun to catch up on what we’ve been dong this past year. And we had quite a long discussion about politics, which we usually avoid, but it was nice finding out they have similar views as ours, (which is unusual).

They had a site with a great view of the lake, and it rained the day we went so it was interesting watching the clouds. 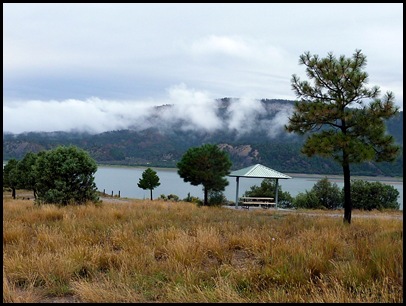 We’ve also managed to take a couple hikes here at Heron Lake. The East Mesa trail gives you good views of the mountains and part of the lake, but doesn’t provide much shade. It was the flattest trail we’ve hiked in some time, though, which was a nice change. 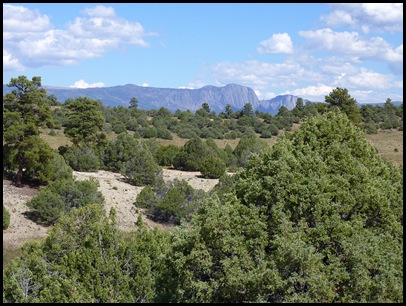 This is a “quiet lake”, so there are only sailboats. 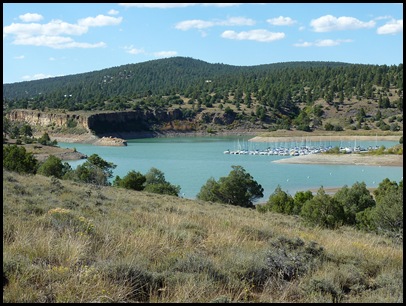 The Rio Chama trail is wooded and runs along a ridge above the river. It is actually 5.5 miles long and goes to El Vado Lake, but we only walked a couple miles and turned around. Parts of it were fairly strenuous. 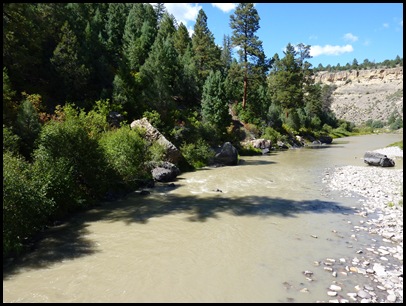 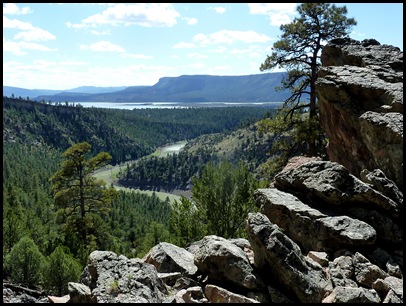 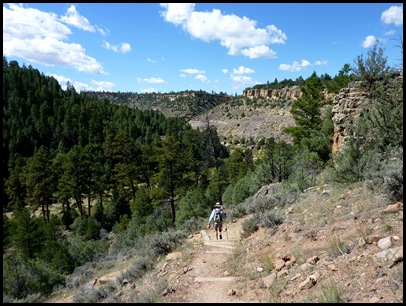 This is a pretty part of New Mexico, and we would definitely like to come back and spend more time. I forgot to mention that the Lowe’s Chama Valley Grocery/Hardware store has an amazing selection for such a small town, and the prices were reasonable. It’s always a nice surprise to find a good place to shop when you’re in the middle of nowhere.