One of the burros at Cinderella Pet Rescue. Anyone need a new pet? 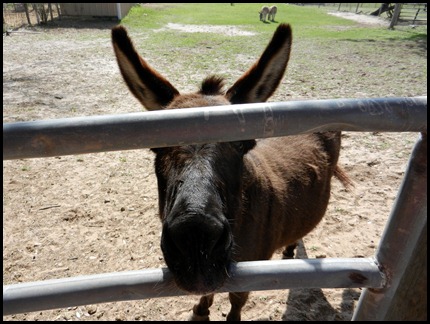 We ended up not going to South Padre Island for the Kite Festival Saturday. There was a front moving in and severe thunderstorms predicted, but as usually happens when you try to second guess the weather, it turned out to be a nice morning with the rain arriving much later in the day. Sorry we missed you, Bill and Cindy! It was a great morning for a bike ride, though.

Sunday’s high was only 51 degrees! What a change from the low 80s we’d been enjoying. Don and Dorothy went to the flea market and bought Mexican Train dominos so they taught us how to play on Sunday. It was a lot of fun and now we can join in with the regulars if we want.

Monday was Cinderella day. The cats were no worse off from their ear mite treatment ordeal last week.

Yesterday we went back to Progreso, Mexico for dental appointments. Now that we’ve been a few times it’s no big deal walking across the border. Our friends Paul and Marsha from Where’s Weaver blog recommended Dr Fernando de la Rosa. They did a great post about their recent appointment, with pictures of Dr. de la Rosa and his office. You can read about it here, since we didn’t take any pictures. Jim was evaluated for his implant, and Dr. de la Rosa called and spoke with the oral surgeon from Reynosa. He will be here Monday so Jim has an appointment at 3 for the implant. He feels much better about it after spending over 3 hours at the dentista’s office yesterday.

I also was examined by Dr de la Rosa and he adjusted my bite since I was hitting hard on a couple back teeth and have been having some aching in my jaw. He took a couple xrays and is concerned that one of my teeth has a small crack and the root may be going bad, which could be causing the discomfort. Of course that means a root canal, which I really don’t want to do, but he is going to do another test when we go back Monday. If I need it done I definitely want to get it taken care of while we’re here, rather than risk an abscess and an emergency trip to a US dentist for a thousand dollar root canal somewhere down the road.

We both really liked Dr. de la Rosa. He took lots of time with both of us, is very personable, speaks fluent English, and even spoke Spanish to me for a good while (slowly) so I could practice. We would definitely recommend him if you’re looking for a Nuevo Progreso dentist. And it’s an adventure trying to find his office. Next trip over we’ll take some pics.