I received an email yesterday from my friend Denise in Erie. PA, along with this photo from the Erie Times. Someone placed a “ghost bike” at the intersection of Joann’s accident. She said they hadn’t yet figured out who did it, so I did some research. 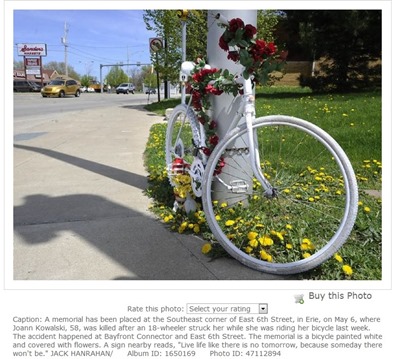 It says a sign nearby reads “Live life like there is no tomorrow, because someday there won’t be.”

I found a Facebook page for BikeErie, a local bicycling advocacy group, and asked the question. Here is their response.

"Gayle, Eric Brozell of Bike Erie started the memorial with the bike. Others from the community added the flowers, sign and additional items."

Here is a photo from BikeErie just after the bike was placed. 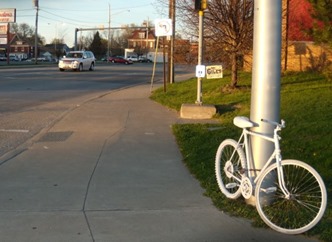 I guess the point of this is as a reminder for people passing by to share the road and look out for cyclists. Unfortunately it’s too late for my friend.