After much worrying on Jim’s part, the flooring installation went quite well. We pulled up carpet on Tuesday and Wednesday, just a couple hours of working each day, and it wasn’t too bad. There were a zillion staples along the edges of the carpet, but because we have the Anniversary Edition of Lazy Daze, ours had an upgraded, very dense carpet. When we ripped it up all those staples pulled right up along with the carpet. The only ones left in the floor were the ones holding the pad, so there were not but a couple dozen to remove, which we were quite happy about. Using a small prying tool, screwdriver, and needle nose pliers we worked them all free. That was the most time consuming part and we were glad the number of staples was small.

Carpet and pad pulled up on one side of the bed. 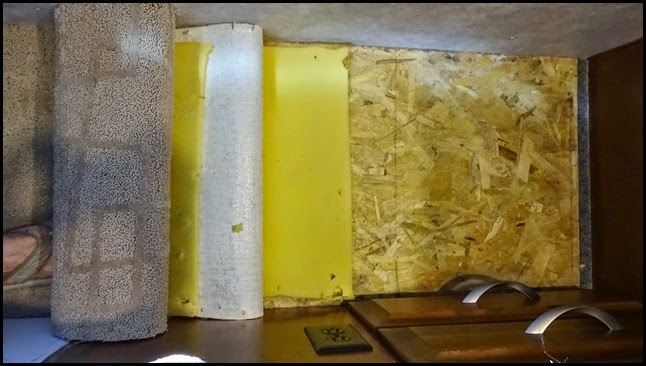 The foam pad stayed under the staples so it made them a bit easier to spot. 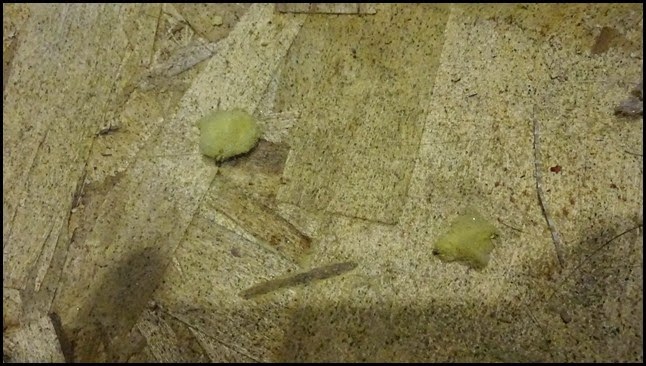 As expected, pulling up the carpet revealed a few problems. In the bedroom there was an angled metal strip along the base of the bed, and another one along the bathroom wall. Carpet covered it nicely but vinyl sure wouldn’t. I called the Lazy Daze factory and was told they were there for support of the bed and support of the wall. My inclination was to take them up, but Jim thought we should wait to see what the floor installer thought. 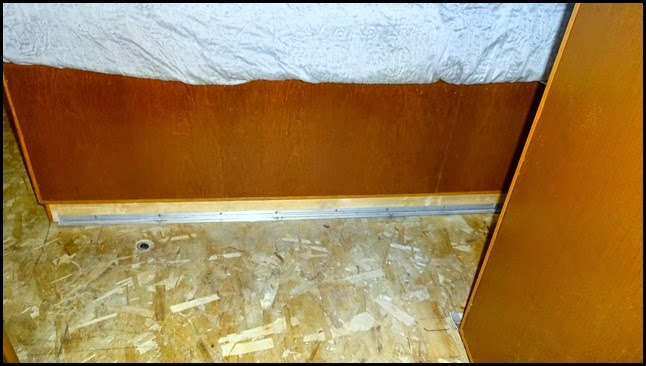 Having heard from other people that we would find bolt heads, we weren’t too surprised. The frame bolts were recessed but in the living room there were three huge bolt heads sticking up from the floor, and they are what holds the propane tank. Jim thought maybe they could be countersunk, but wanted to wait for Kevin, the installer, to see if he had any other ideas. 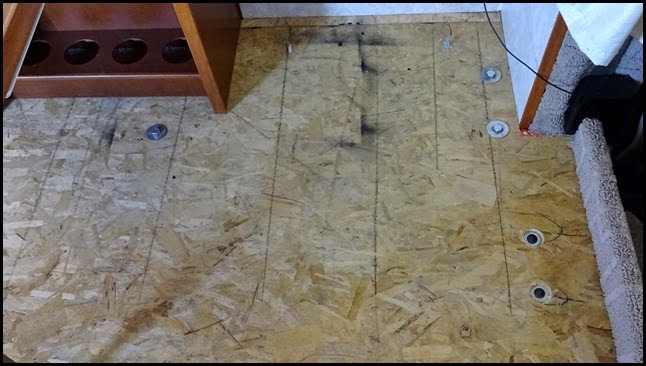 On Thursday morning they were scheduled to start around 8:30. When no one showed up by 9, Jim left to take our sofa seat cushion back to Action to sew in a button that had come out. The installers came a short time later, so I showed them our problem areas. They decided to take out the metal strips in the bedroom and see what we thought. After much pushing on the bed and wall we all decided to leave them off and hope it doesn’t cause any problems. When Jim returned he wasn’t sure that was the right thing to do, but I feel that Lazy Daze tends to use overkill in their construction methods, so hopefully the bed will not move, nor will the wall come down. Guess that remains to be seen when we actually drive down the road the next time!

Here is Kevin (in the gray shirt) and his crew figuring out where to cut the vinyl. I wish I had taken a photo of the piece after they cut it down but forgot. There is a huge amount of waste when installing sheet vinyl in an RV. By the way, fortunately the owners of the property agreed to let us put the cats in their screened porch for the day. They were not happy kitties. 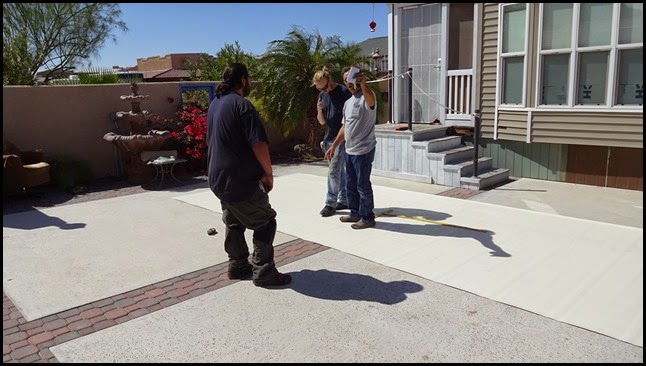 As to the problem with the propane tank bolts, Kevin said he did not feel comfortable trying to countersink them, considering that we were dealing with propane. So we just decided to leave them as is and cut around the heads. Not an ideal solution, but they are under one chair and the table, so not really visible. Besides, we left the seat belts in behind the chairs, which don’t look so great, either.

And now the before and after photos. I didn’t take too many before shots, since the carpet was just too disgusting. 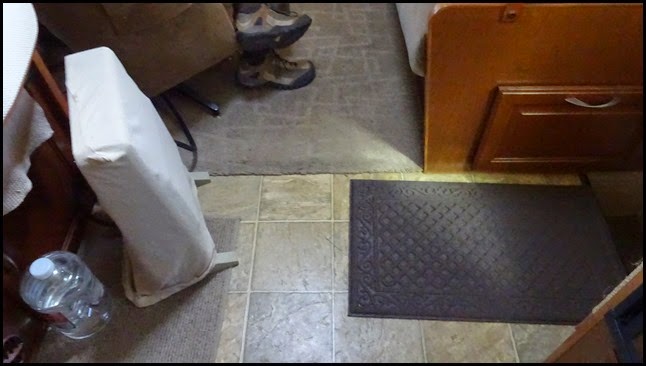 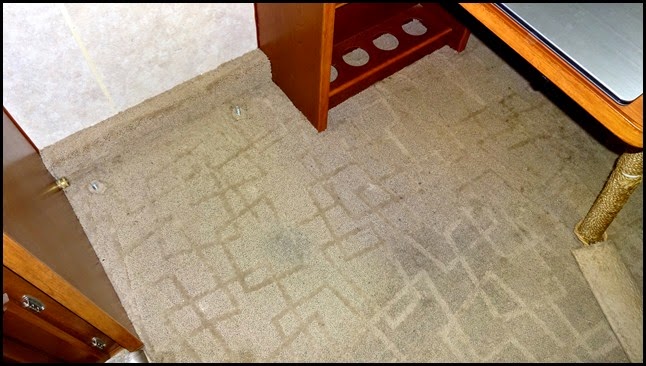 It is impressive what they can do with vinyl these days. 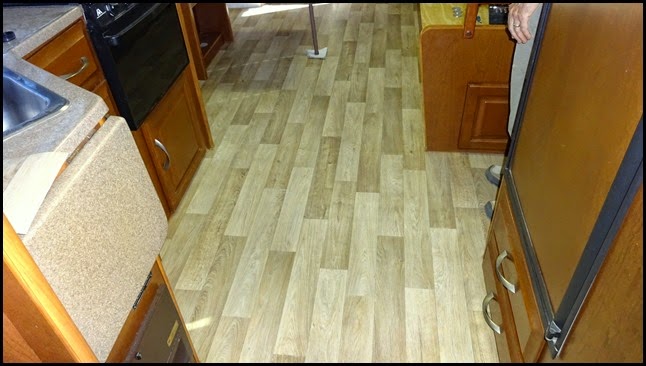 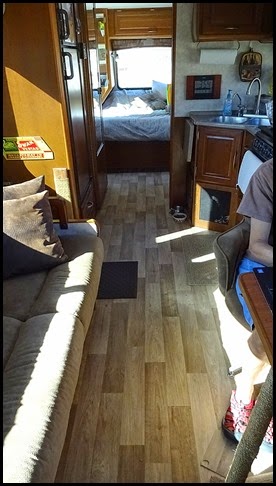 Along the bed they just put a strip of carpet back where the metal piece was, and it looks fine. 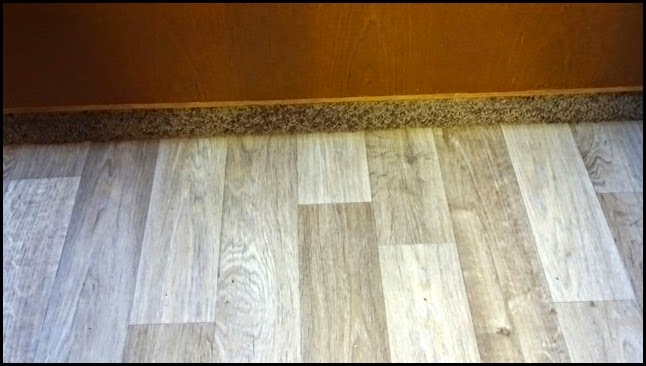 They had to cut out the vinyl under the table for the bolt head. It was just too high to lay the vinyl over without causing a wrinkle. Luckily we have a cat scratcher under there so it is covered. I am working on coming up with something to cover it with at a later date. They were able to lay the vinyl over the other two bolts, so they are not visible. 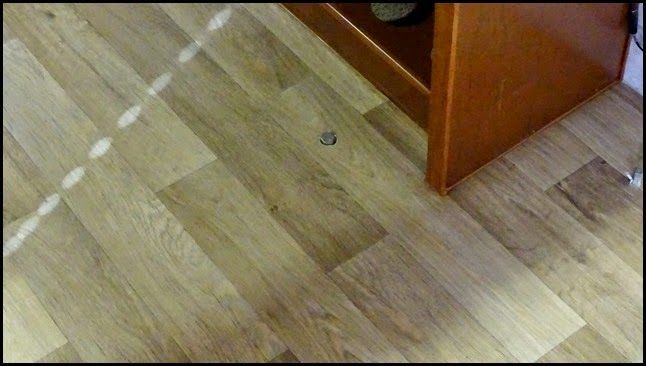 Of course we still have the carpet in the doghouse area, but that is not an easy thing to replace, so we will just live with it. Instead of a metal strip they just rolled the carpet edge and stapled it down, which is how Lazy Daze did the transitions originally. It’s a nice clean look. 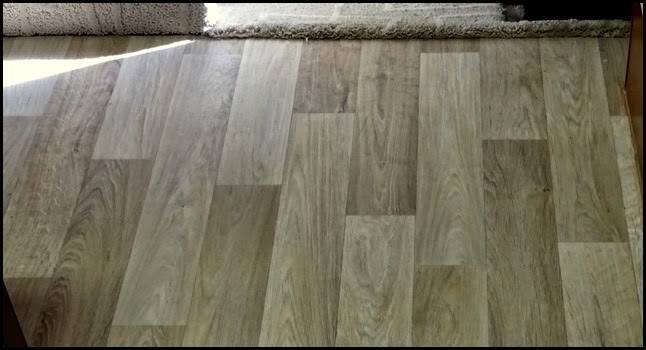 We still have another issue to deal with and that is how to cover the exposed portion of the wheel well in the bedroom that was covered with carpet. The cats had done a number on it so I just removed it. I didn’t want to put carpet on it again, and Kevin said the vinyl would not adhere, so I’m thinking after I get the adhesive off I may just paint it white or find some contact paper that’s a close match to the walls. There is also a strip of adhesive along the bottom of the wall where the metal strip was but we haven’t tried to remove it yet. If it won’t come off we may just put a vinyl molding strip along there. 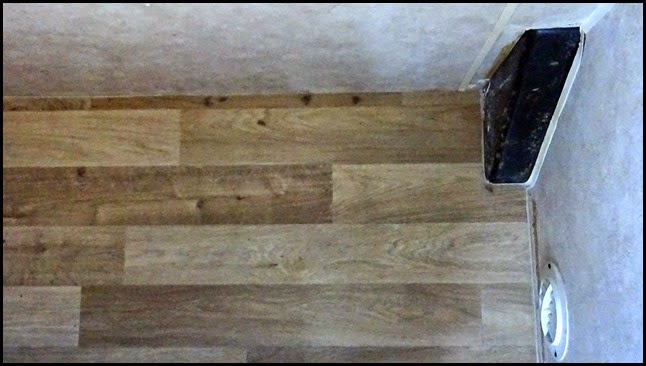 I must say we are thrilled with the job and the floor. Kevin Favreau was the installer, and he worked with Bob’s Flooring in Yuma where we bought the material. He and his crew did a great job. I forgot to mention they put caulk along the junction of the floor and wall, and used white caulk where there was wallpaper, and brown where there was wood. To us it looks much better than molding. I am so happy to be rid of that nasty carpet! 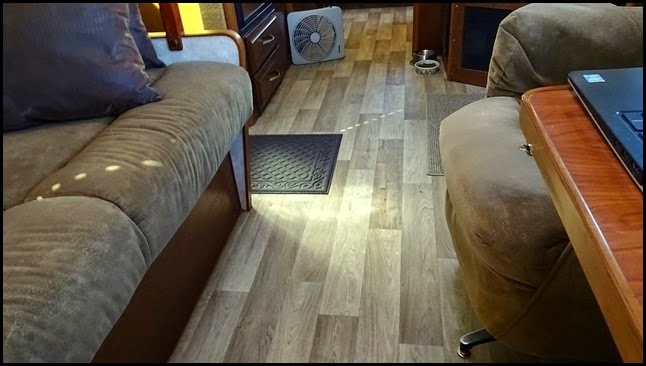 Late yesterday afternoon Kim and Debbie stopped by to check out the floor, since they are still hanging around the Yuma area, too. We went out for pizza and beer, and some much needed laughs after a couple of stressful weeks.

Kim, Jim, me and Debbie. 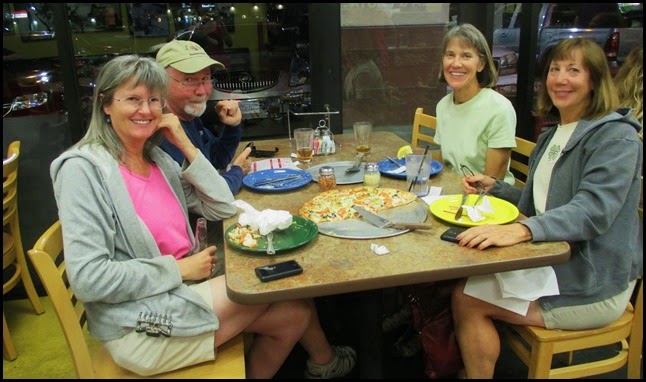 This morning we headed back to Algodones for my last dental appointment. Dr. Hernandez finished the root canal and put in a permanent filling. He said everything looked great, there was no sign of infection, he found no other canals that were missed, and said time will tell if the tooth settles down and quits bothering me. I am just happy to be finished and am hoping for the best.

Looks like we can finally get out of Yuma!