Despite the forecasted high 90s, not knowing when or if we may ever get back to this area, we decided to make our way into the heart of Hells Canyon, having gotten a little taste from the overlook on our scenic drive last week. The problem is this is not an easy place to get to, especially with an RV. 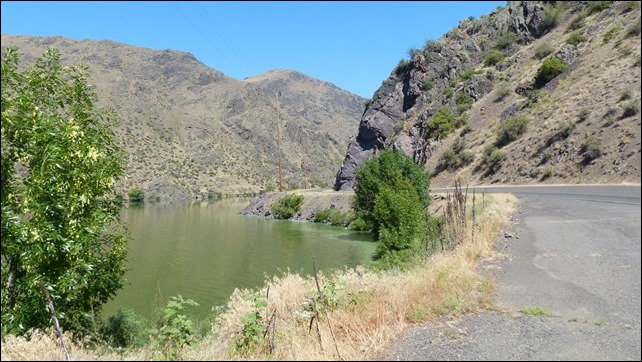 There are only three ways in and out of Joseph, Oregon and none of them involve a straight highway. We could either drive 68 miles on a very narrow, winding road, or take the long way around for 178 miles, where we would still have quite a few miles of winding roads to navigate. We decided not to hook up the car and take the shortcut, which turned out not to be so bad, but it did take us over two hours to cover those 68 miles. 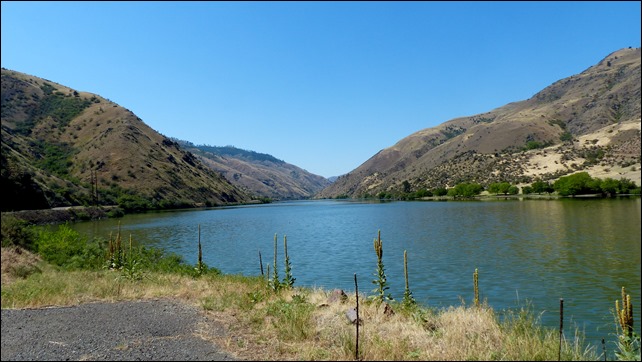 Idaho Power has several campgrounds on the Snake River and we chose Copperfield Park near Oxbow Dam, the first campground you come to on the road heading towards Hells Canyon Dam. For $14/night ($16 if you’re under 60) we had water and electric at our site. The campground was maybe a third full, and most of those people were on the loop next to the river, although you can’t see it from the sites.  We had no Verizon signal but the local telephone company offers free wifi for 15 minutes every twelve hours, or you can pay $5/day. Jim opted for the $5 but it was so poor the next morning he called to complain and the guy did something that made it better. He didn’t tell Jim but apparently he extended our 24 hours since we had fairly good wifi the rest of our 2 night stay. 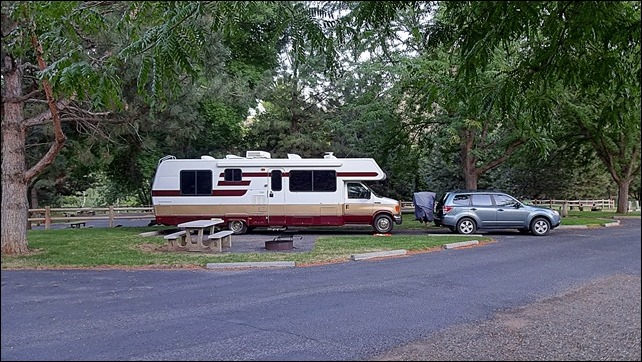 It was just too hot to do anything outdoors besides a short walk around the campground the day we arrived, but on the next morning we took a drive to Hells Canyon Dam and the visitor center, 22 miles north.

We got a few miles up the road when we came to this roadblock, a flock of turkeys slowly making their way across the road. 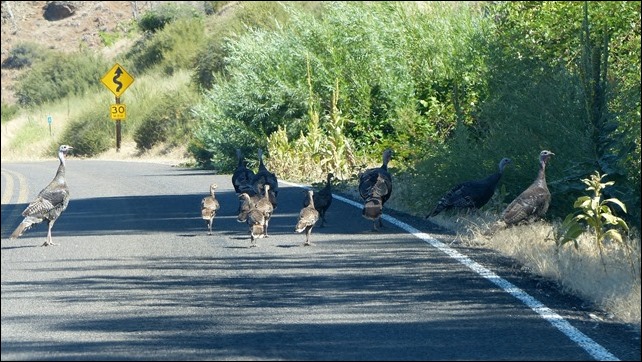 Because of the dams the Snake River is just a big reservoir until you get to Hells Canyon Dam. 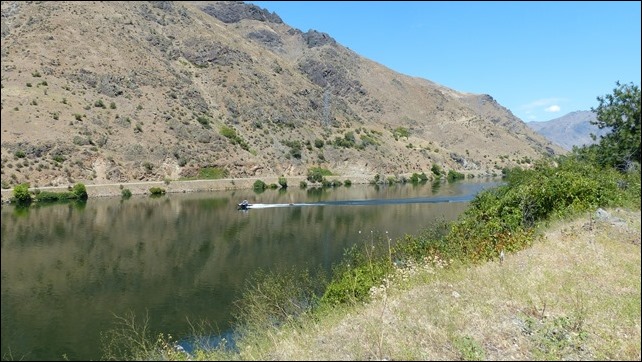 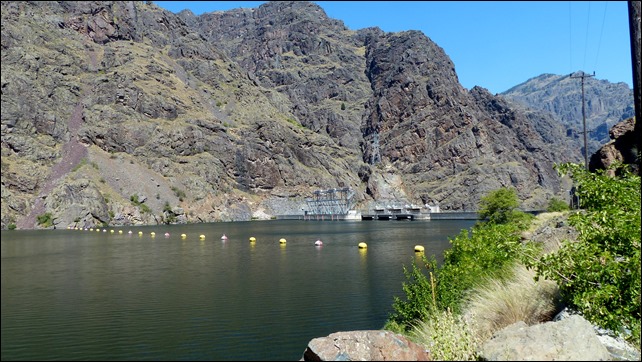 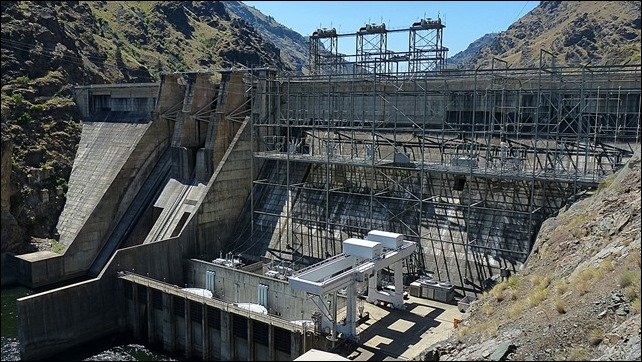 The small visitor center is at the end of the road a couple miles past the dam. From here they do raft and jetboat tours of the natural, wild side of the river. There were several getting loaded up. 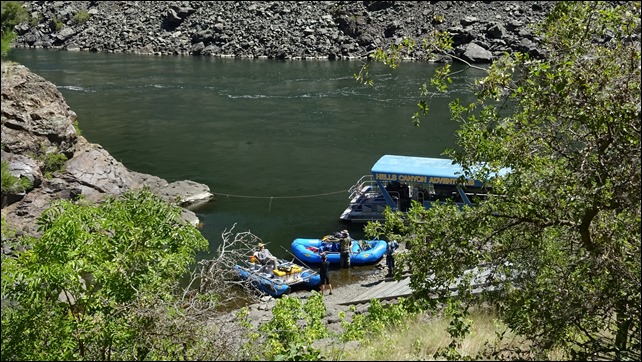 Looking back towards the dam from the overlook at the VC. 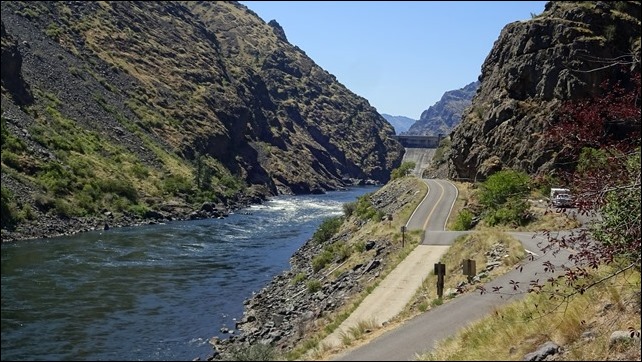 With the temperatures already in the low 90s, a hike on the mile long Stud Creek trail was about all we were up for, but it was so beautiful I wish we had been able to do a longer hike. There are almost 900 miles of trails in the Hells Canyon Recreation Area, most only accessible on multi-day backpack trips. 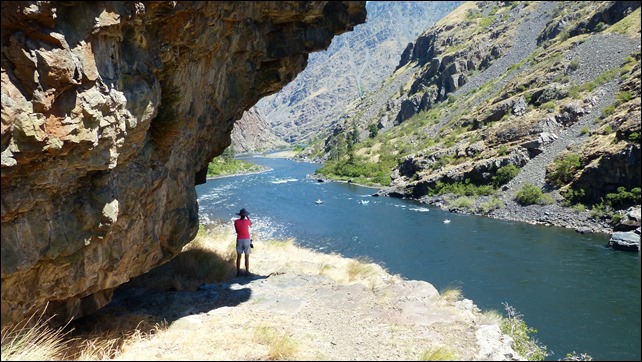 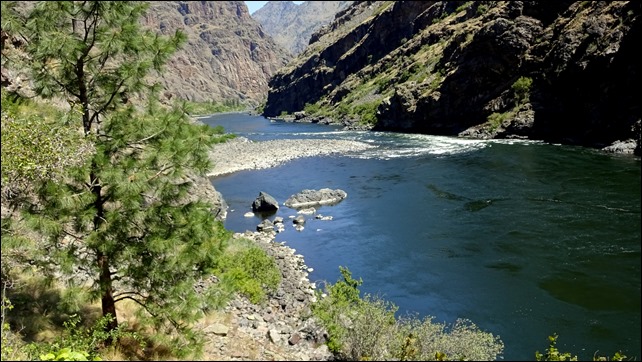 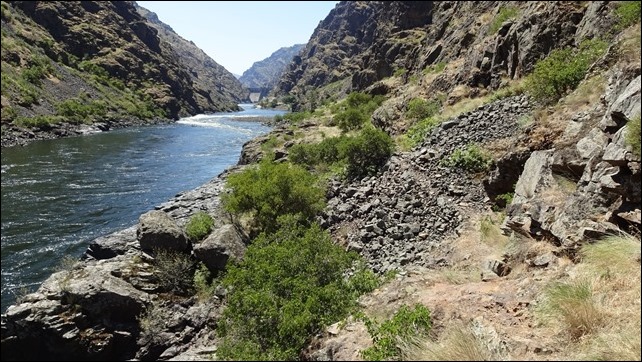 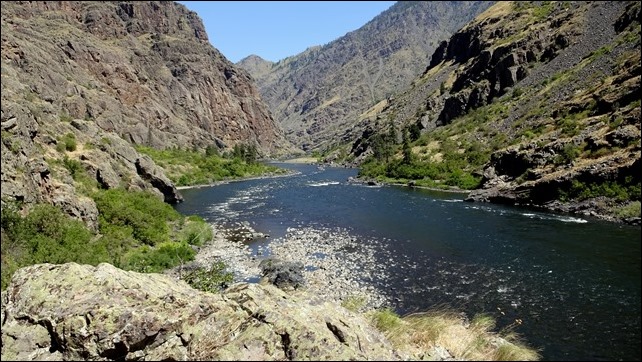 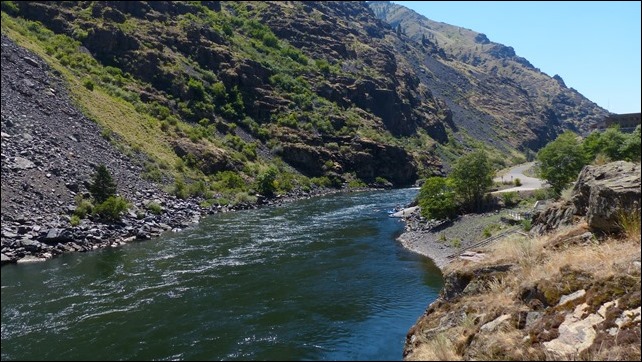 The only other way to really experience the canyon is by getting out on the water. In hindsight we probably should have looked into that. 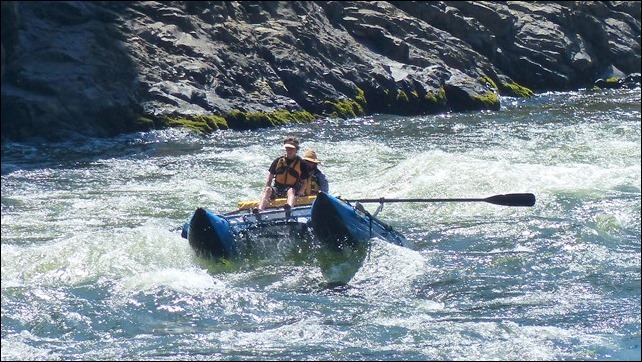 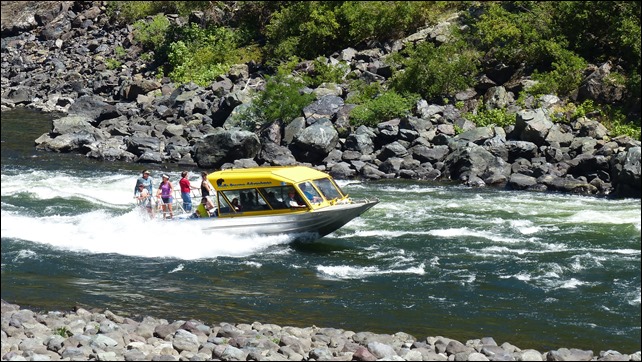 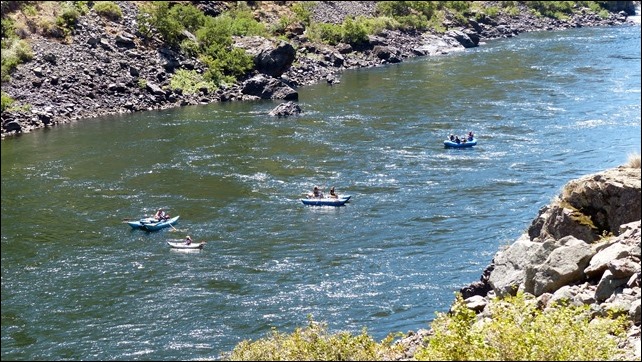 And although the brochure says this is an easy trail, much of the surface was rocky and there are quite a few ups and downs and a lot of exposure with huge drop-offs. 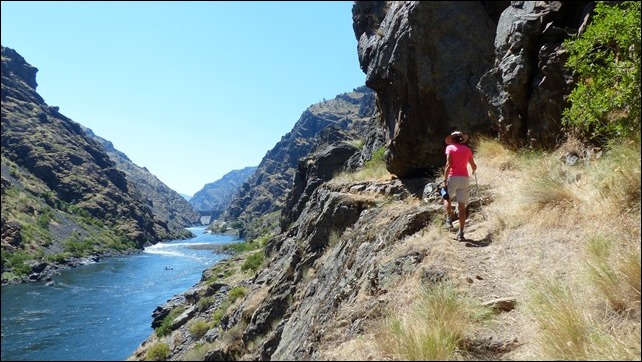 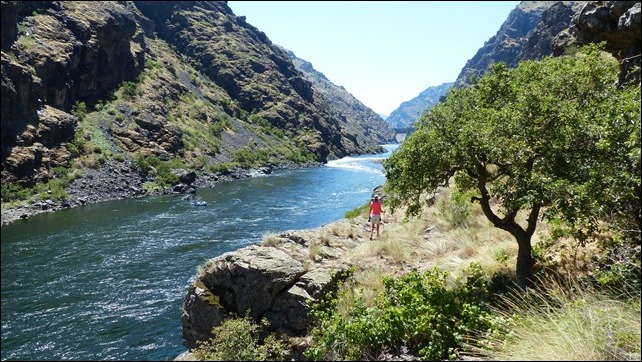 My favorite photo of the day, and we took a bunch. 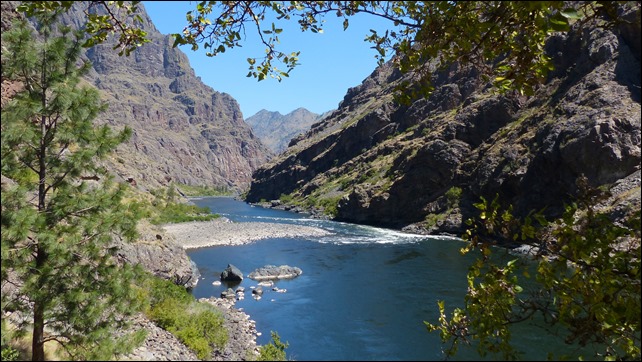 When we got in the car to head home, Jim asked me if I wanted to hold onto the Panasonic Lumix camera, the “good” one with a 24x zoom. We have a standing joke as I like to have that one handy in case we see something along the drive. I kept hoping to see a bear when we were in Joseph, since we were on so many roads where we hardly ever saw another car. I just knew a bear was going to show itself but never did.

So what a surprise when along came a bear cub from the bank of the river and crossed the road right in front of us! Jim was telling me to give him the camera, as by then it was heading up the hill on the driver’s side. The camera strap got caught on something and of course it took forever for me to free it and hand it to Jim, so by the time he had it the bear was almost out of sight. He did finally get one shot before it ran off.

When I looked at the photos I was surprised to see the bear picture was in black and white. Turns out in all our wrestling with the camera the setting got changed. Oh well, it was still exciting and you get the idea. 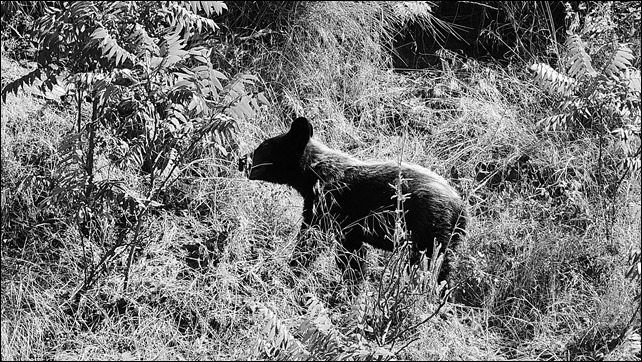