Monday was spent taking the train to downtown Portland once again. We did a long walk through the Pearl District and Nob Hill along different streets than we had previously been. We spent some time in US Outdoor, a huge store where Jim bought a pair of pants on sale. 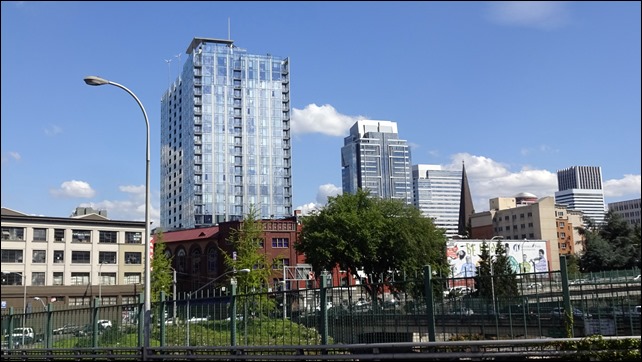 Then we visited Powell’s Books, which claims to be the largest book store in the world. The four story building occupies an entire city block,  and all of it is full of books, new and used, on every topic you can imagine. It made my head spin, and we were surprised at how crowded it was, and how many people were in line actually buying books. Since we don’t have the space to keep many books, we pretty much just use our Nook and Kindle to read these days, so we were not in the market to buy. I was intrigued by the number and variety of adult coloring books, but figured I would probably not have the patience to sit and color. Some of the pictures in the books were so elaborate and detailed it looks like it might be fun. 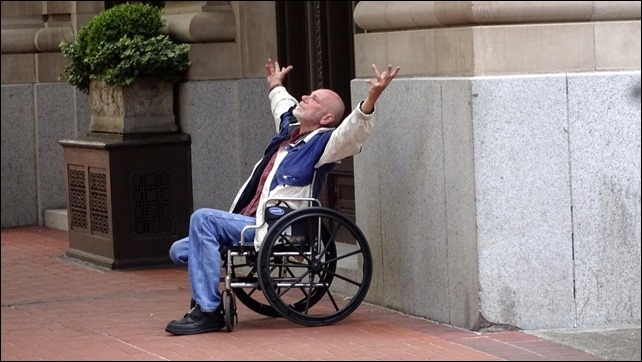 We passed by and checked out a Whole Foods and Fred Meyer, all within walking distance of many nice houses, condos and apartments. Jim suggested that we should rent an apartment for a year in the city to experience a different way of life, where we could take public transportation or walk to just about everything. For some reason it does hold some appeal. 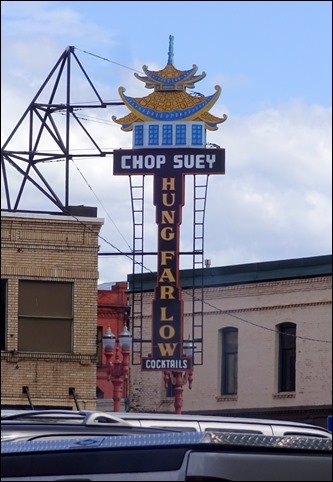 After another happy hour beer at Rock Bottom Brewery we hopped on the train back to the Expo Center where a few stops later this gentleman got on. Yes, his pants are halfway down his thighs, and he was not aware of it. 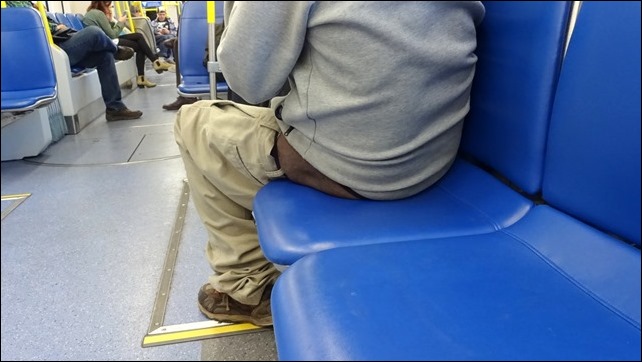 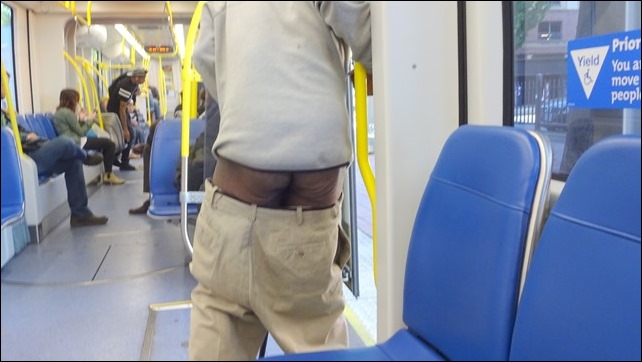 When he got off a kind woman getting on helped him pull his pants back up. I just couldn’t. Then at the next stop another woman got on and sat on the same seat where he had just been sitting. At that point Jim decided city living and public transportation probably weren’t for us!

On Tuesday Jimbo and Chica came by for a visit. Jim is camp hosting at Lake Harriet, about 60 miles away, and was ready for a change of scenery on his day off. Jeanne came over from Vancouver to join the party. 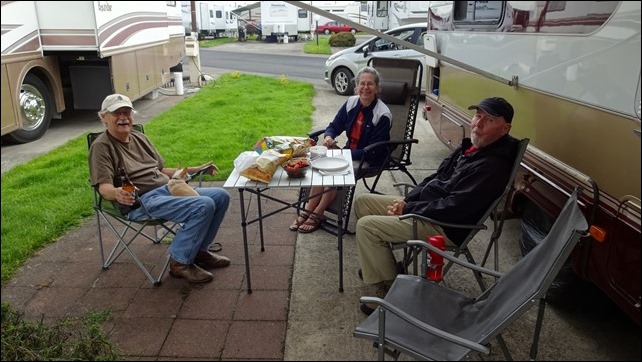 Chica is just as cute as ever. 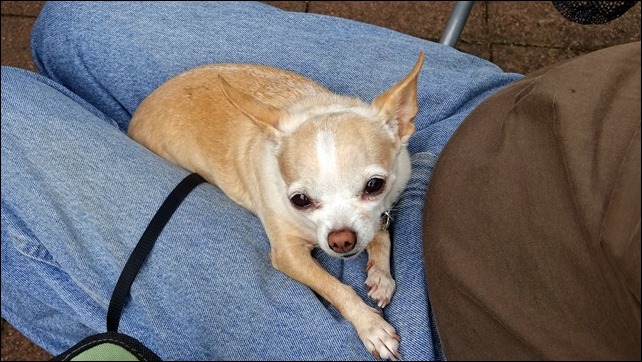 And she still likes a little taste of beer. It was great seeing them again. 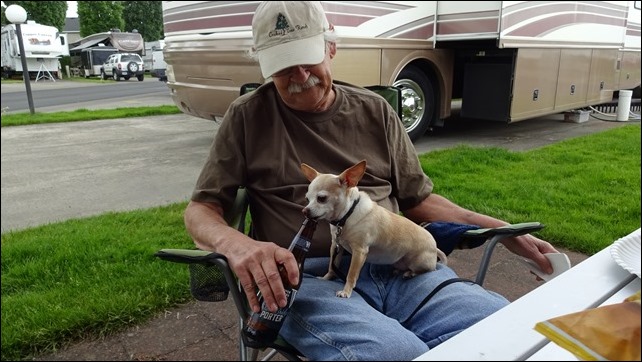 After days of gloom and off and on rain, we finally had a mostly clear day yesterday so we took a drive to Powell Butte, 13 miles southeast of the RV park, for a hike with views. I didn’t research the trails because I read there was a visitor center and assumed we could pick up a trail map. Turns out it is not a manned visitor center, just some outdoor displays, and there were no trail maps or brochures. I did find the restroom interesting, although there was no other way out than the one door. I so wanted to push the black button but restrained myself. 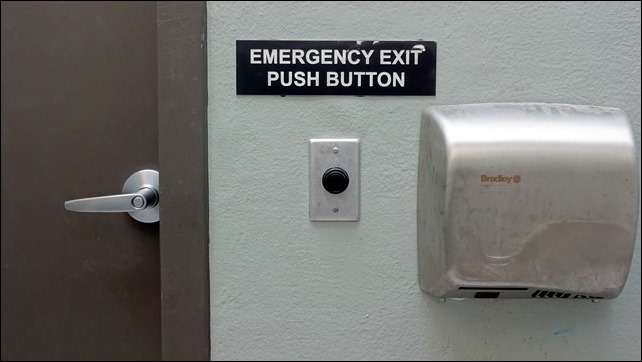 We asked a few people if they were familiar with the trails, and finally talked with a woman who gave us some ideas for a loop hike. There is a complicated network of interconnected short trails and they are well signed, and each post has a little map of the trail, but only a small portion of the trail system. We finally figured it out and did a 4 mile loop, but in hindsight we should have taken a photo of the large trail map at the trailhead where we started. Live and learn.

Powell Butte is a 600’ extinct volcanic cinder cone and is also the site of two massive underground water reservoirs, 50 million gallons each, which help supply drinking water to Portland. The park has 9 miles of trails over grasslands and through hemlock forests, a very pleasant place to walk. Some of the trails are actually paved or gravel and there is not a lot of elevation gain. 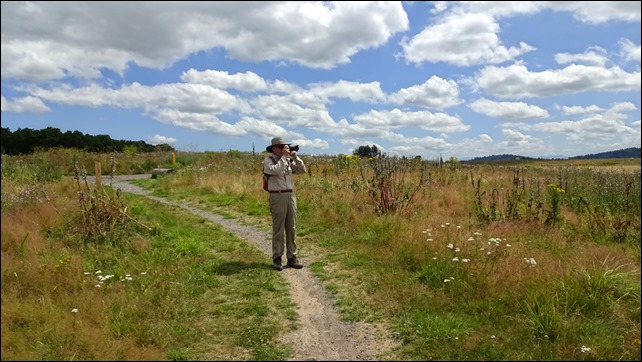 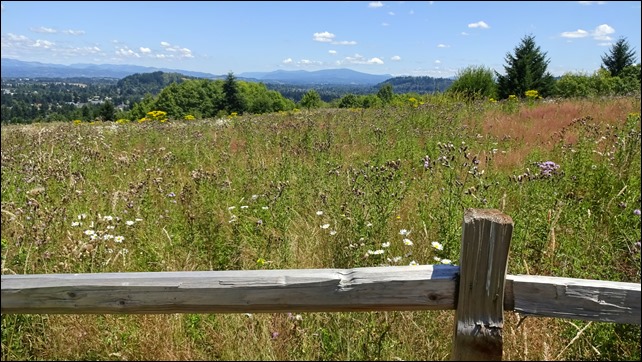 Most of the flowers were a bit past their peak but still pretty. 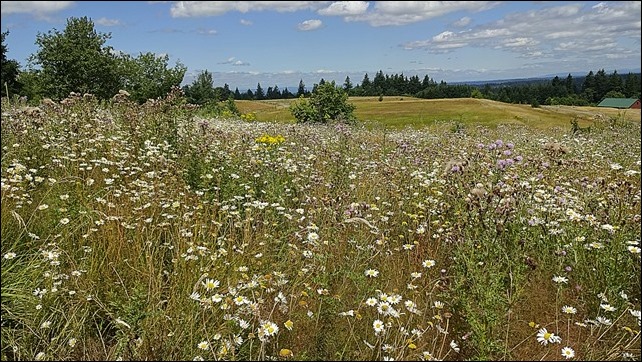 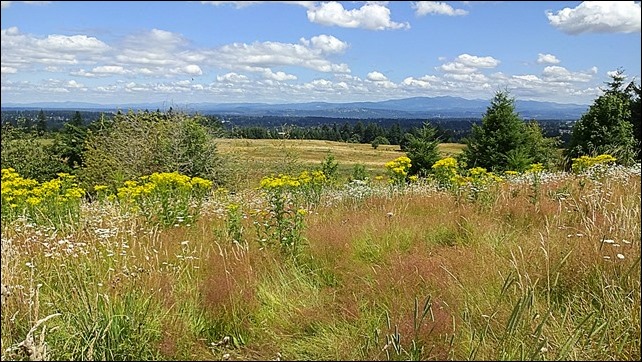 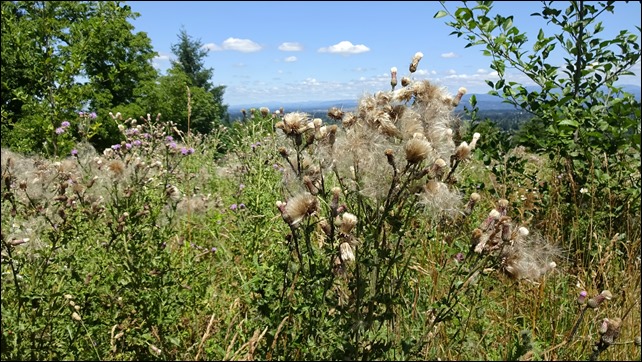 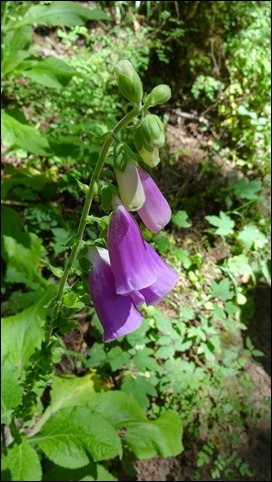 One of the trails took us through the cool green forest for about a mile. 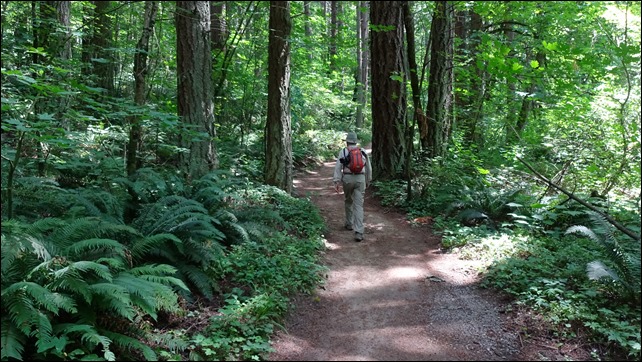 But we loved the wide open views the most. At the summit there is a peak finder, where on a clear day you can see Mt. Hood, Mt. Adams, Mt. St. Helens. Mt. Rainier, and Mt. Jefferson. Yesterday, we barely got a glimpse of Mt. Hood through the white puffy clouds. 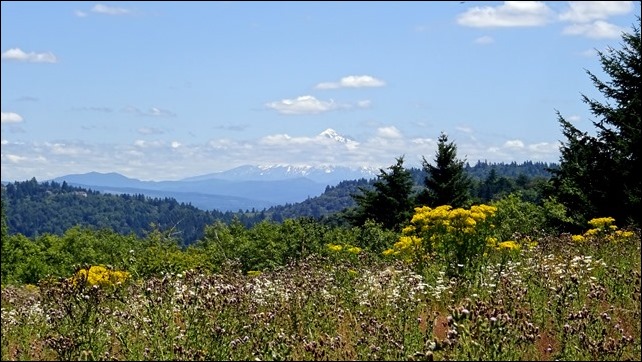 Still a beautiful day for a hike, and a good ending to our two weeks in Portland. 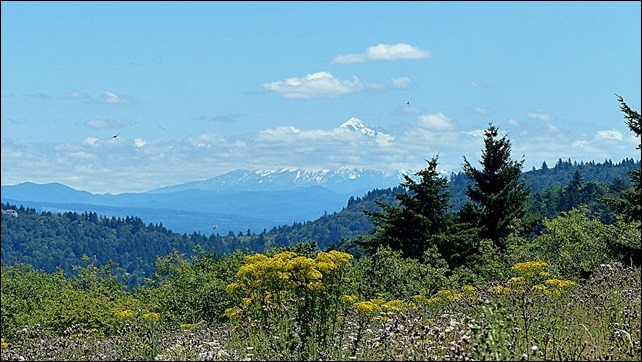 Today we move east on our way to Joseph.