Beer, the Fourth, and a Walk in Washington Park 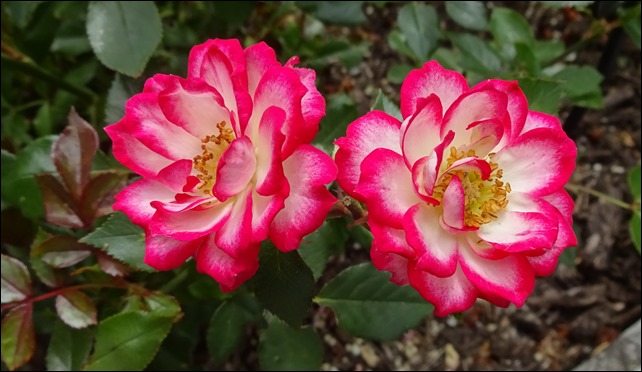 Sunday morning we hopped the train again from the Expo Center to Union Station in downtown Portland, where we had a half mile walk through the Pearl District to Fields Neighborhood Park, site of the Portland Craft Beer Festival.

A few weeks ago when I was researching things to do in Portland I saw that this festival was taking place. Tickets were $25 in advance, $30 at the door. Knowing neither of us would drink that much beer, I saw that they needed volunteers to pour. For a 3 hour and 15 minute shift we each received a t-shirt (that we had to wear), mug, and 10 beer tickets.

Since several people asked how we got to be pourers, I wanted to address this. Most festivals and races (like bicycling or running) depend on volunteers, and since every event has a website now, just check the volunteer link to see what is needed, fill out the application, and you are in. Volunteers always get a little something for their time, usually a t-shirt, free admission to the festival, or free beer! It’s a fun way to get involved in a community event, meet some locals, and learn a new skill, like bartending or directing traffic during a bike race like we did in Bend. 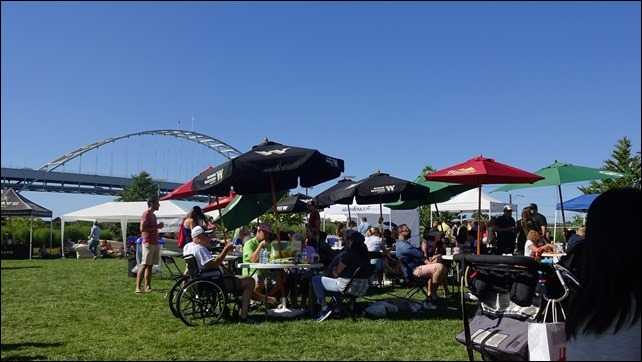 The Portland Craft Beer Festival ran from Friday -Sunday, and when we saw openings for Sunday from noon to 3:15, that sounded like a nice quiet time to be pourers. After group instructions our shift started off very slowly. Each of us poured from two taps. Mine came from Ex Novo and Jim’s were from Widmer Bros. All breweries represented were from within the Portland city limits. By about 1:30 the crowds picked up and our time passed quickly.

Jim, waiting for our first customers, and telling me not to take his picture. 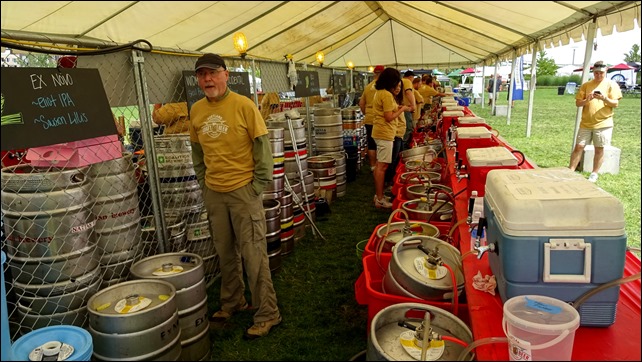 Both of my kegs had to be changed out during my shift. We poured a lot of beer! 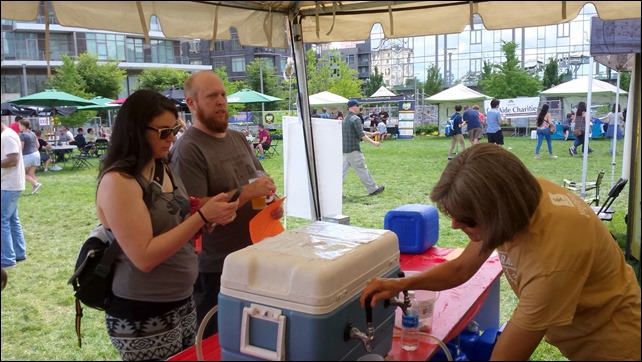 By the time our shift ended it got quite crowded, understandable as it was a beautiful sunny day in the 70s. And Sunday was family day, so a lot of people brought their kids and dogs. 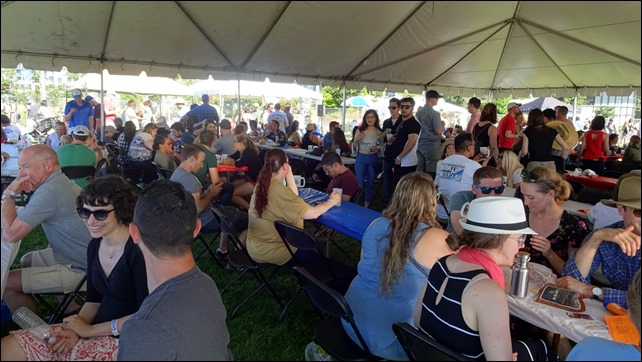 When the second shift came in to relieve us, we took our tickets and began our own beer tasting. Everything we tried was good, as was the slice of vegan pizza from Tastebud, one of the food carts there. I am not proud to say we each drank our 10 tasters, more than either of us are used to drinking, and I barely remember the walk and train ride home, but we did have a really good time and talked with some fun people, both locals and other tourists. It was a great day.

We had a pleasant 4th, with a walk along the Columbia River. 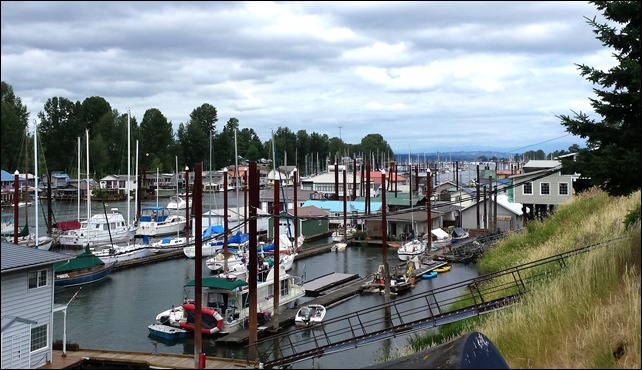 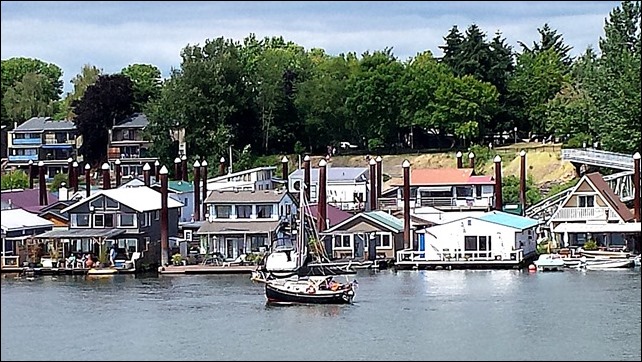 That evening we were invited to Jeanne’s site for a picnic before the fireworks, along with another Lazy Daze couple from Portland, Glen and Liz, whom we met at Quartzsite. It was a fun time although a bit on the cool side for us, and Liz made the best marionberry cobbler. We took our chairs across the road from the RV park by the yacht club to watch the fireworks on the Vancouver, WA side. Not used to staying out until 10:30!

We didn’t get any good photos but you can see how they were going off all along the river, and not all part of the show from Fort Vancouver. This is the last year that personal fireworks are legal in Vancouver, so they were everywhere and the sky was full of smoke. 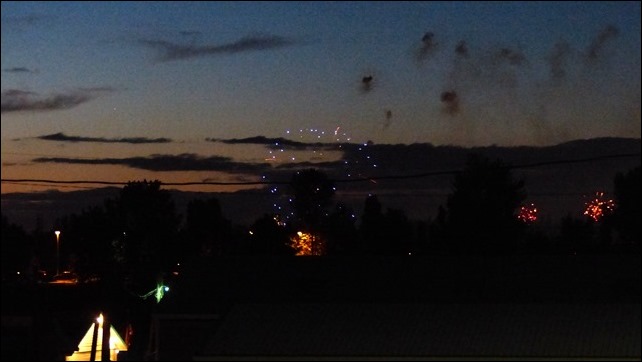 Yesterday we took the train again to downtown and Washington Park. I was in need of a hike and wanted to visit the International Rose Test Garden in the “City of Roses”, one of Portland’s nicknames. We walked a loop of over six miles along both paved and dirt trails through the park, and only got lost once. 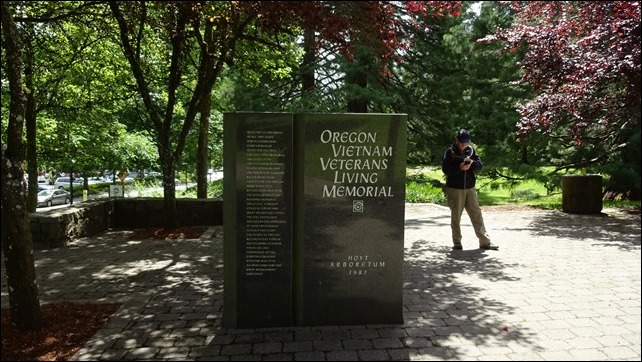 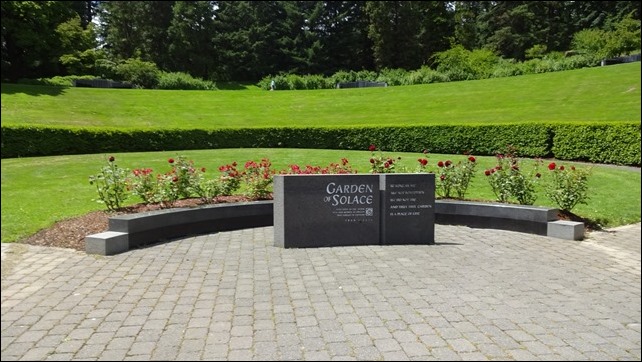 Jim thought there were way too many trees in the park but it was very pretty. On Gaelyn’s last blog post she joked about Bill’s dendrophobia, and Jim is definitely afflicted with that, also. 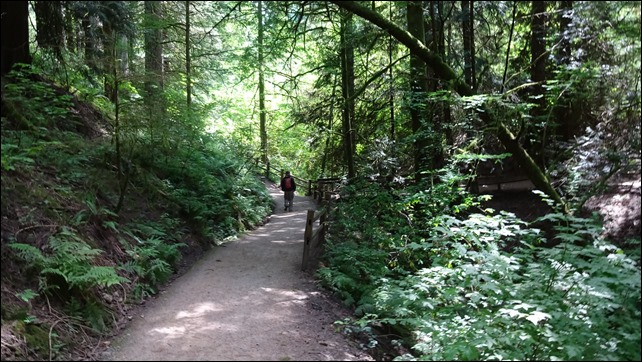 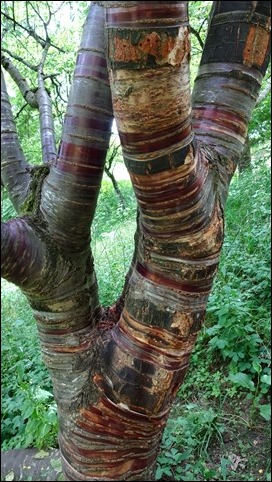 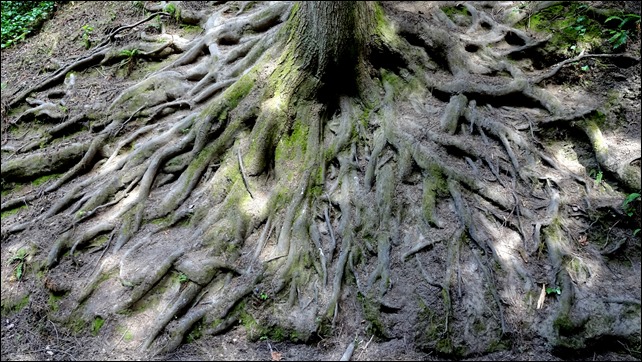 The rose gardens were beautiful but way too crowded so we didn’t spend much time there. Jeanne, Liza and Glen will understand when my first thought upon arriving at the gardens was that it was way too “peopley”. 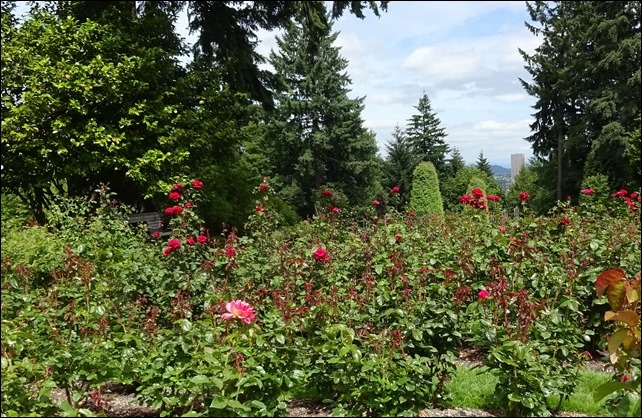 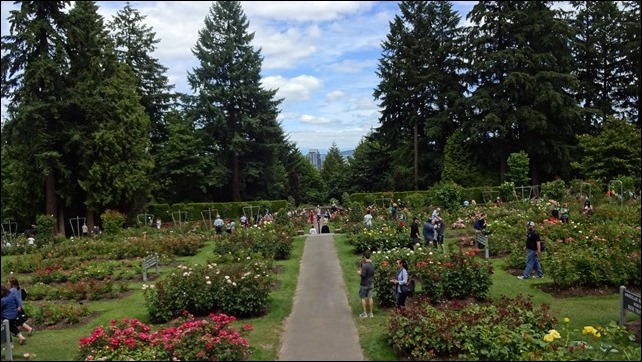 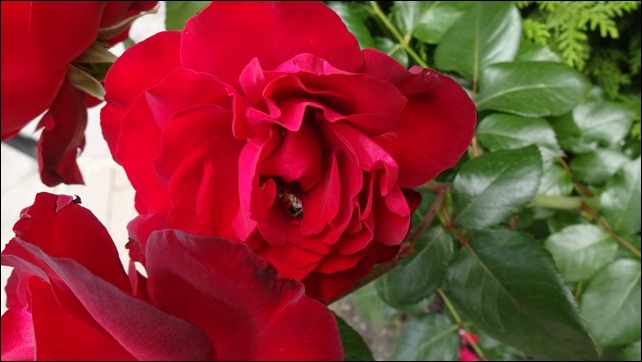 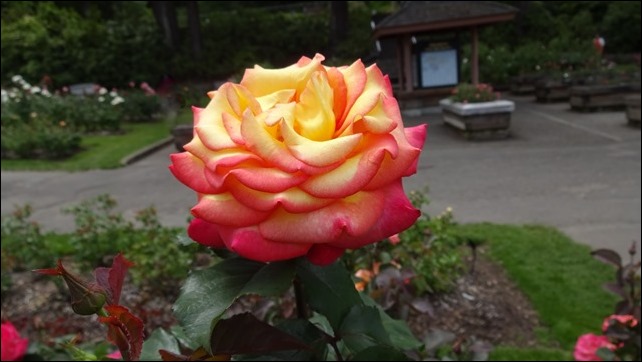 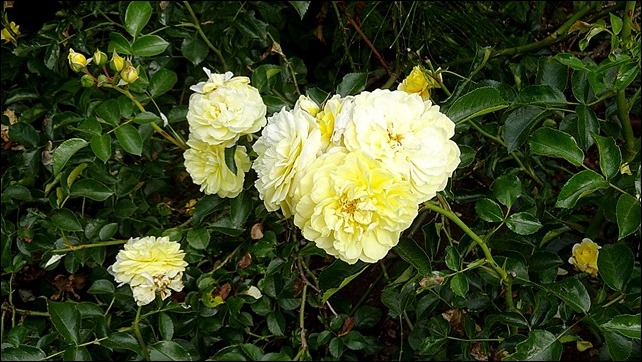 Didn’t realize we were going to be hiking through a grove of giant sequoias as we passed through the Hoyt Arboretum. 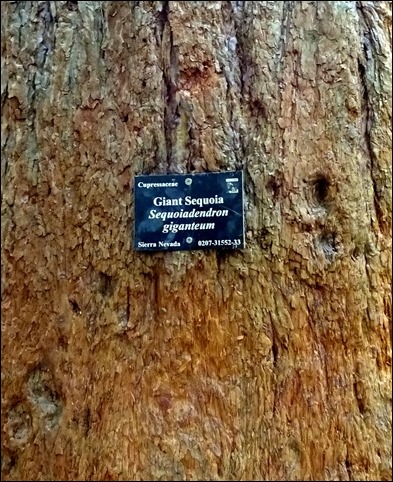 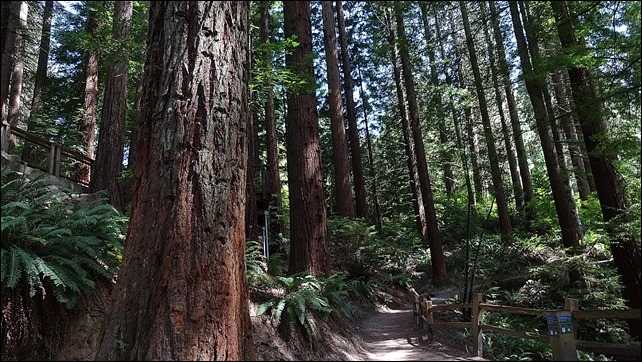 After the hike we took the train back to Pioneer Courthouse Square, where we had to transfer to another line. 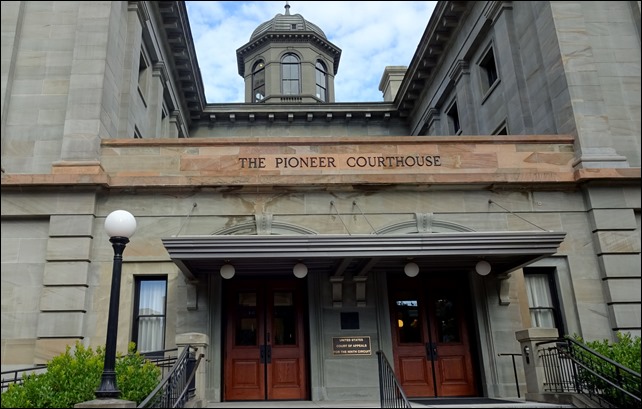 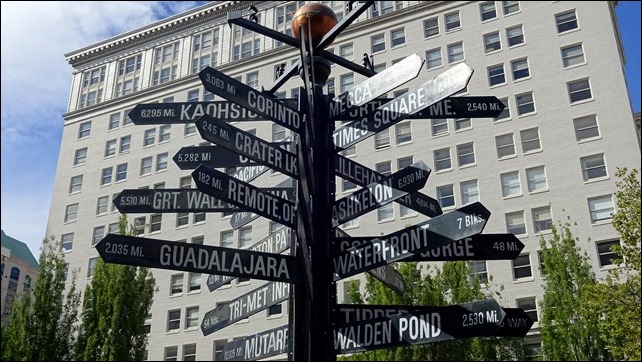 Just a few blocks away was Rock Bottom Brewery. I had tasted one of their beers that I liked at the beer festival, so we stopped in for happy hour. Excellent! They had just tapped an imperial IPA, and it was even better than my favorite at Crux in Bend. Too bad they only brew their beer in small batches and don’t bottle it. Jim had an ale on nitro that was really good, too. 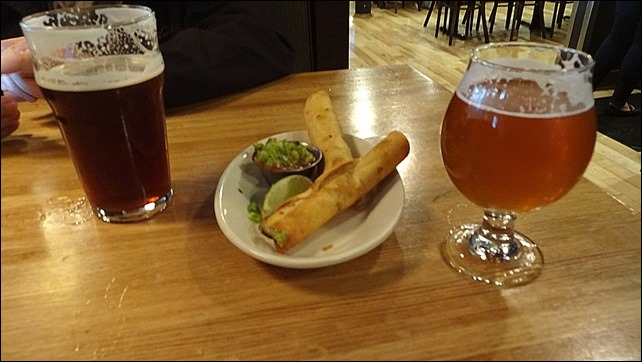 Today we board the train once again as Jim has an appointment for an eye exam, tomorrow we have a hike planned with friends, and Friday Elvis gets his teeth cleaned. Glad we decided to spend two weeks here. Our time is going fast.