A Few Days in Ouray 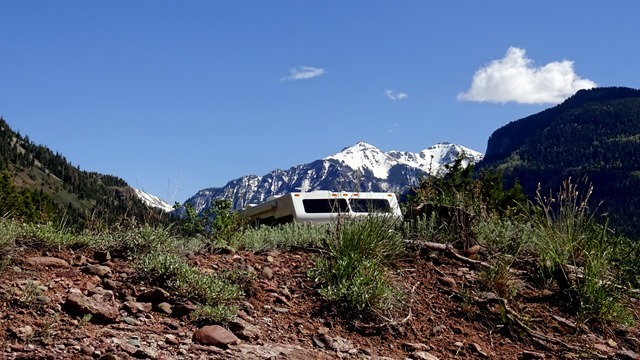 Since we don’t care to drive in the rain, I checked the weather before we packed up on Friday and it looked great, just a slight chance of a stray afternoon shower. After dumping tanks for $10 at The Views RV Park across from the entrance road to McPhee Reservoir, we made our way through Dolores to pick up a couple pies, strawberry-rhubarb and cherry this time, and headed northwest up Highway 145 towards Ouray. We didn’t hook up the car knowing it would be a good climb.

This is such a pretty drive along the Dolores River and over 10,222’ Lizardhead Pass. We stopped just after the pass for a scenic lunch break, where the blue skies turned gray, it began raining quite hard, and the temperature dropped to 45. So much for weather forecasts. It rained for at least the next hour until just before we got to Ridgway. Not fun on those curvy steep mountain roads. 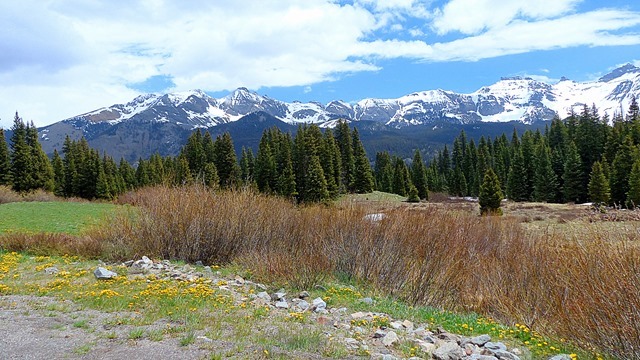 Fortunately it was warm, dry and sunny in Ouray, and with some creative leveling using most of our blocks, we managed to get settled on a little BLM area just outside of town. Oh, yes, we could live here, at least in the summer! 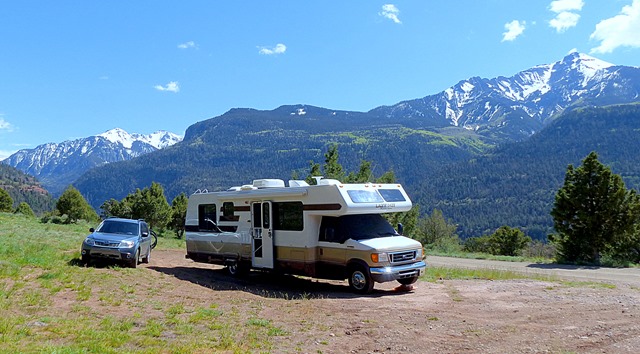 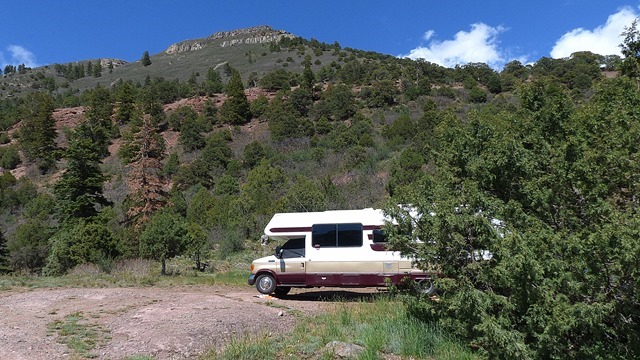 Jim claimed his hip was bothering him, or it just may have been the early start time, but he was happy to get a little rest while I hiked with Mark and Bobbie. With so much snow still at higher elevations the hiking options are limited, but the news was that Corkscrew Gulch, a Jeep road south of Ouray, had been plowed. Bobbie had to work at 2, so we left around 8:30 with Bobbie driving their truck and Mark in the Subaru. Mark was planning to summit one of the Red Mountains if there wasn’t too much snow, and we were planning to hike as far as we could for two hours before turning around so Bobbie had time to get back and shower before work.

We followed Mark up the not-very-good road for a mile or two. I would not have wanted Jim to drive our Subaru on this! Lots of rocks, holes, and standing water. It is marked as a 4 wheel drive road. 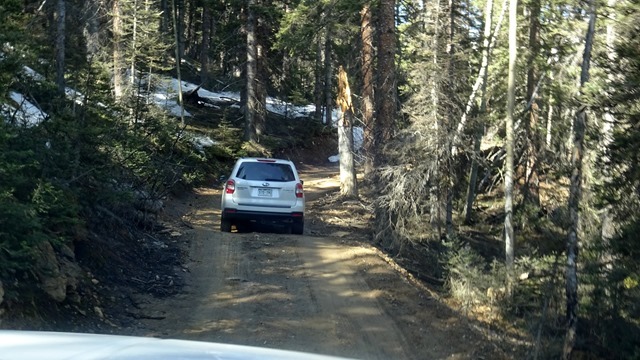 Mark decided it was time to stop and park here. 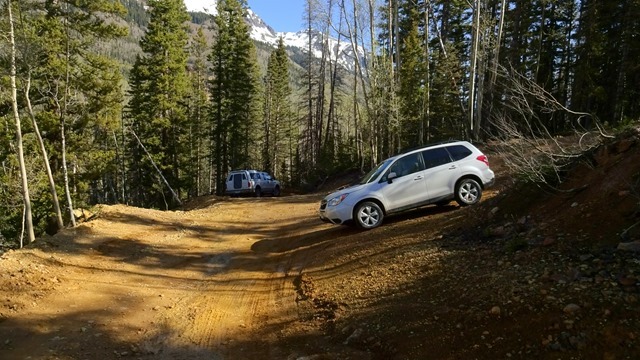 The scenery was breathtaking, as was just trying to slowly hike up the steep road. I think Mark and Bobbie were taking it easy on me, as I was able to keep up with their pace. I wasn’t sure I was up to a a hike at over 10,000’ since we haven’t been at those elevations in a long time, but as long as I didn’t try to carry on a conversation it wasn’t too bad. 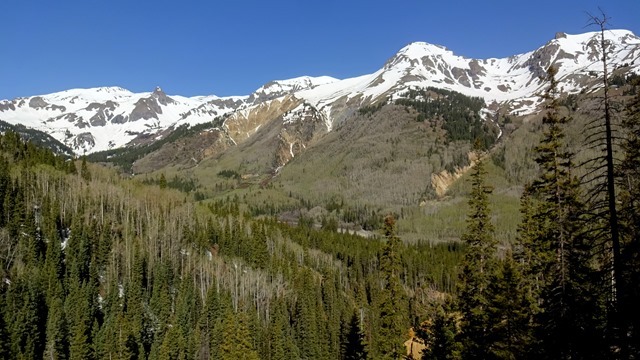 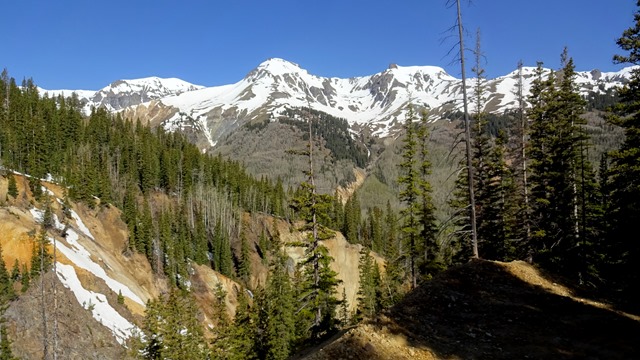 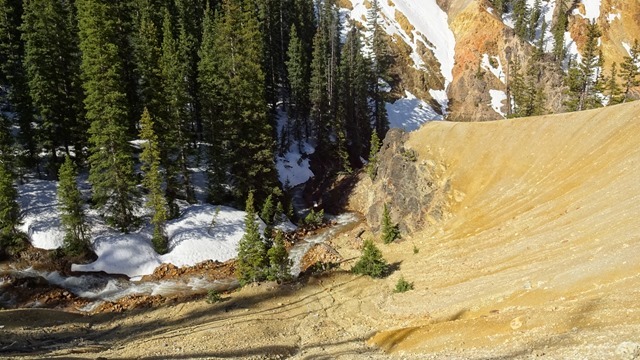 We had to cross the creek several times, this one being the worst. 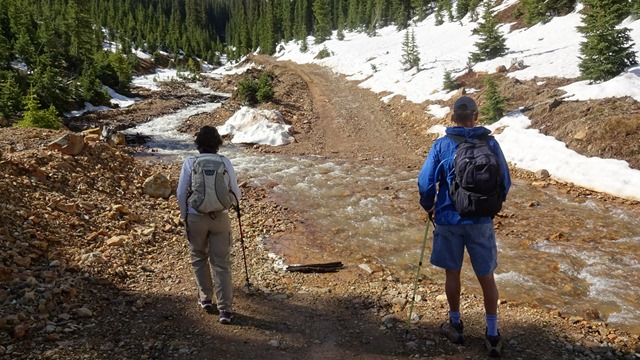 Mark found a more narrow spot and put down a log, but it was still a bit nerve racking for me. 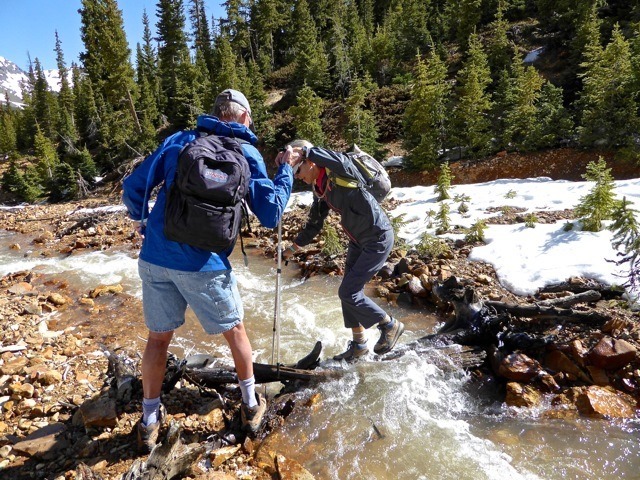 In places where water wasn’t running down the road, our boots crunched over ice that looked like fine latticework. 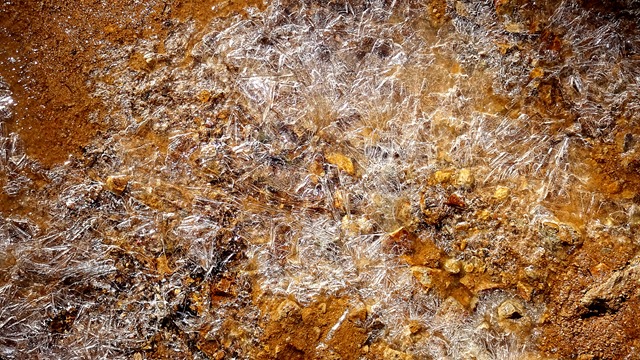 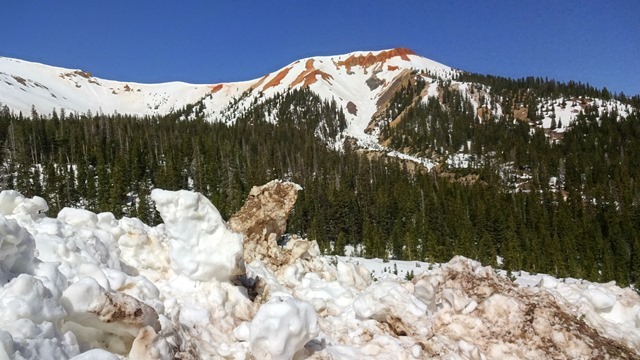 We were passed by a Jeep and an ATV, and soon they came back down, telling us the plow had stopped after the next couple of switchbacks ahead. Bobbie and I decided that would be our turn-around point. 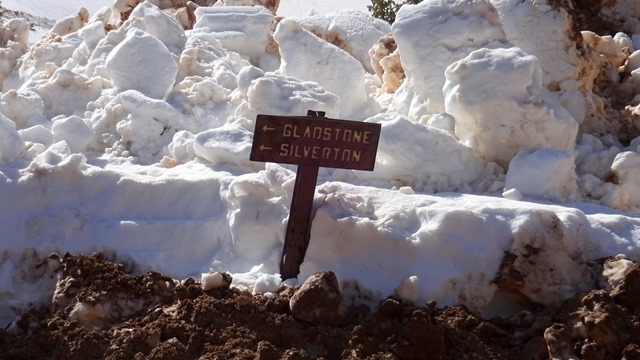 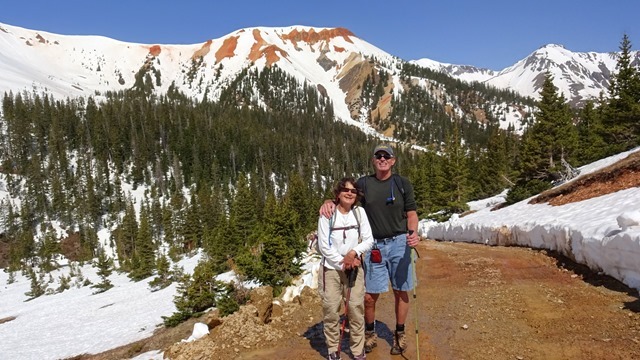 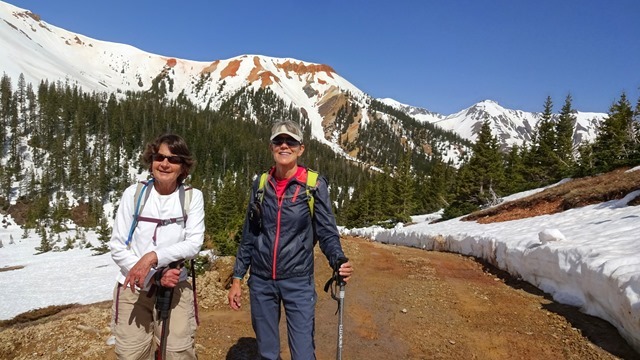 As we climbed higher and higher the snow got deeper and deeper. 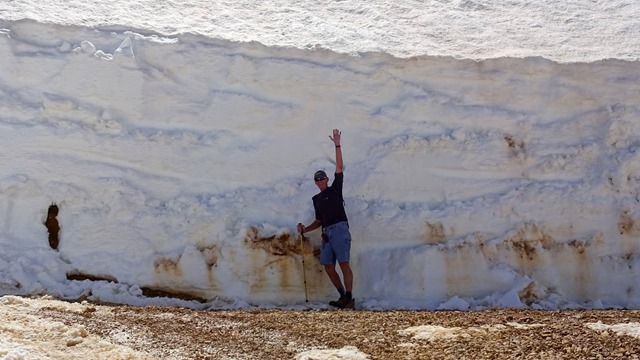 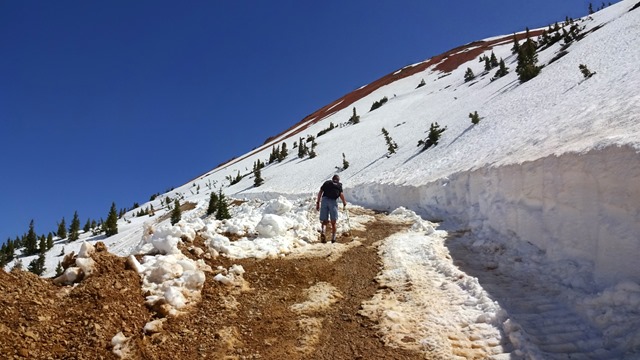 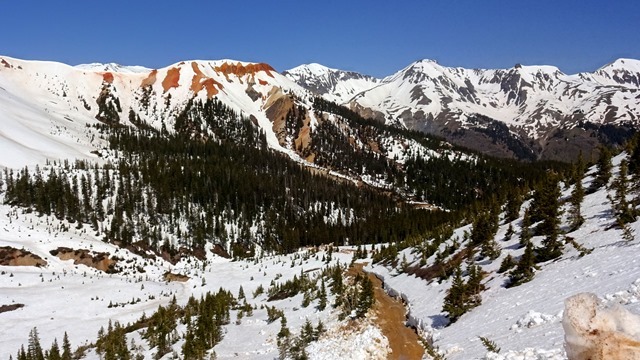 There was a lot of snow on the last switchback before the plow stopped. We can’t figure out how the driver even knows where the road is to plow. 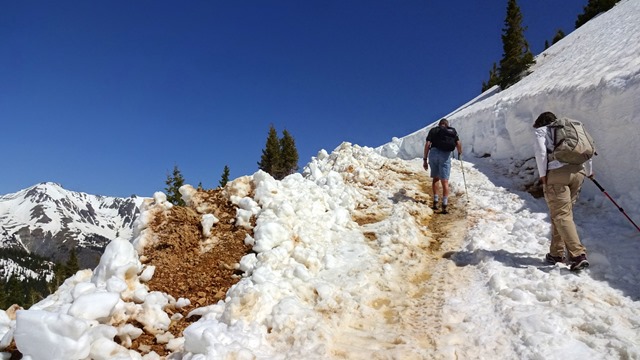 Mark decided to battle the snow in an attempt to get to the top of Red Mountain 1, with Bobbie saying her goodbyes. 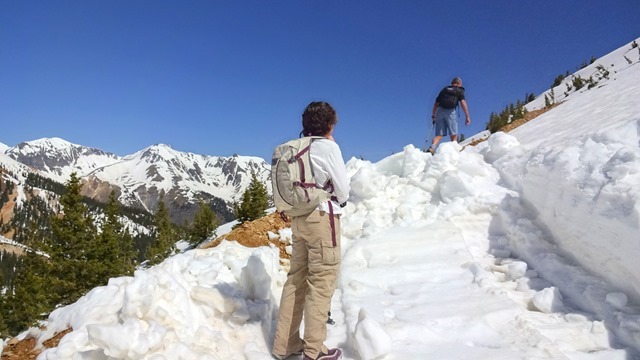 I was thankful that she had to go to work, as I’m sure she would have followed right along behind him, and I’m not sure I could have. 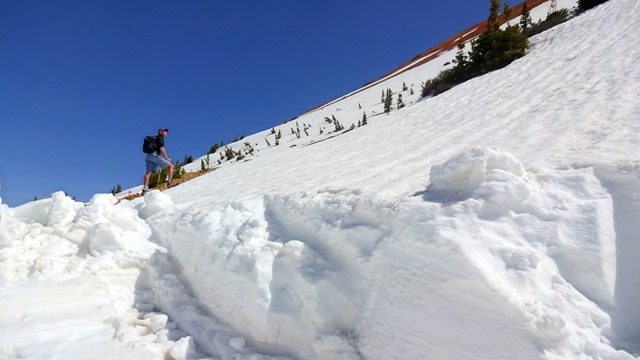 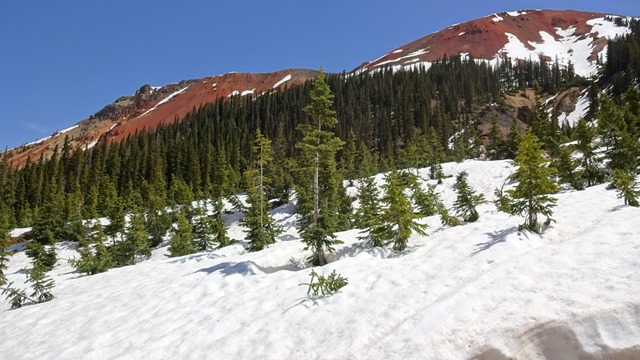 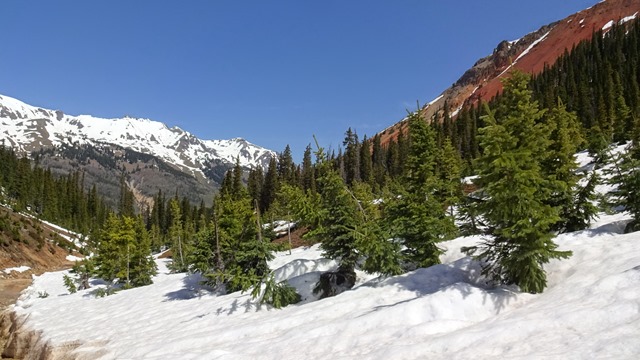 It was an easy walk back down to the truck on an absolutely beautiful day to be outside. Bobbie and I logged 4.2 miles with 1400’ of elevation gain, and were up to 11,700’ at our turn around point. You’ll have to check in at Box Canyon Blog to see if Mark made it.