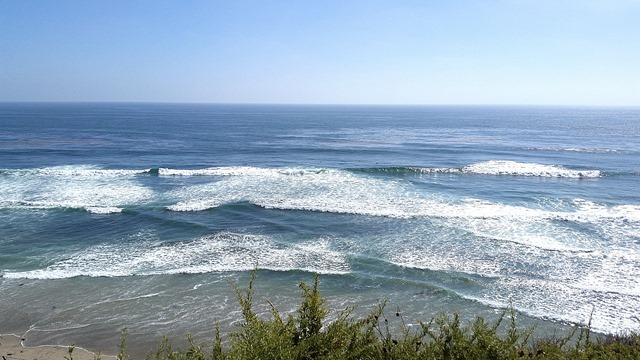 A couple weeks ago we joined Terry and LuAnn for a trip to the beach town of Encinitas, famous for good surfing and flowers. Located just 25 miles north of San Diego, the eclectic downtown is right along historic Highway 101, and the beaches are just a couple blocks away. We stayed two nights at the Days Inn, which left a bit to be desired, but for the price the location was great, less than a half mile walk to the beach and only a bit farther to downtown. And right across the street was Lazy Acres Natural Market, a really nice grocery store that came in handy since the free breakfast at the hotel was terrible. 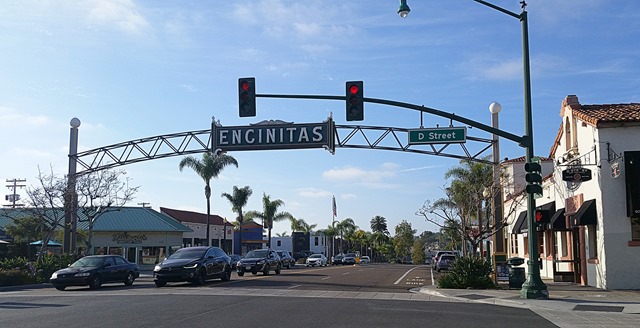 We walked on the beach and around town, did some shopping at the outlet mall a few miles north in Carlsbad, and had some great beer and vegan food. Lunch at Eve was excellent, and the plant-based Impossible Burger at Encinitas Ale House was pretty good, too. They have a huge selection of beers so we had to go there for happy hour both nights.

Here are some photos from our walks. This is a local cactus/succulent garden just a couple blocks from where we stayed. 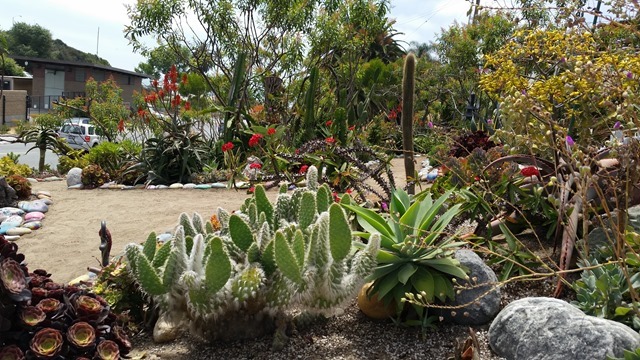 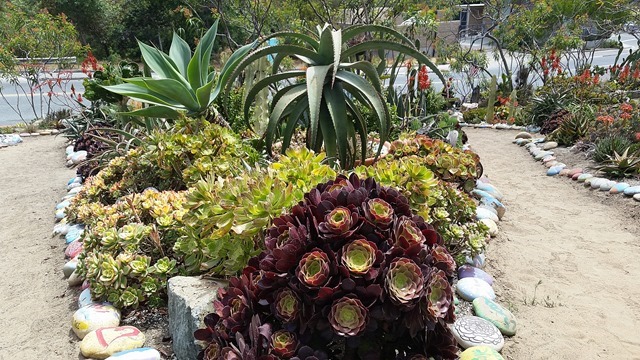 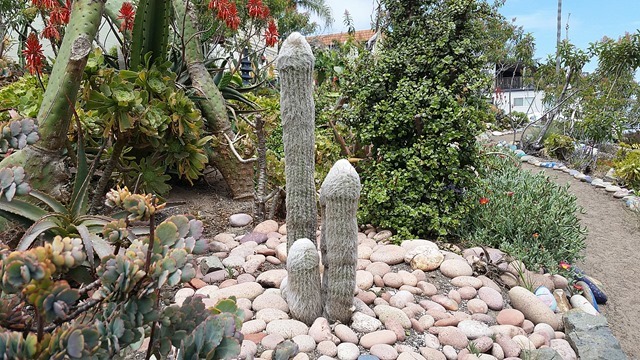 Rocks were available to be painted and left to join the others. 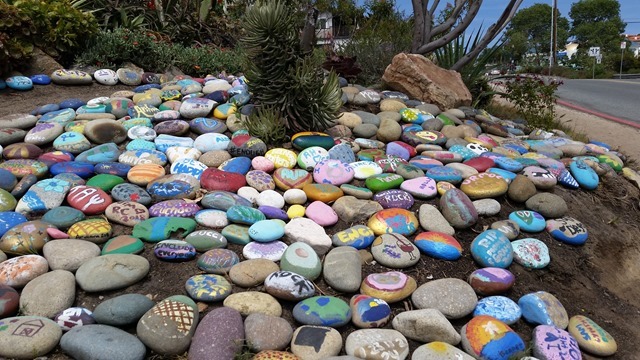 Moonlight State Beach is a popular place to be on a warm sunny day. It was in the 70s, a nice respite from the 90s back at Jojoba Hills. 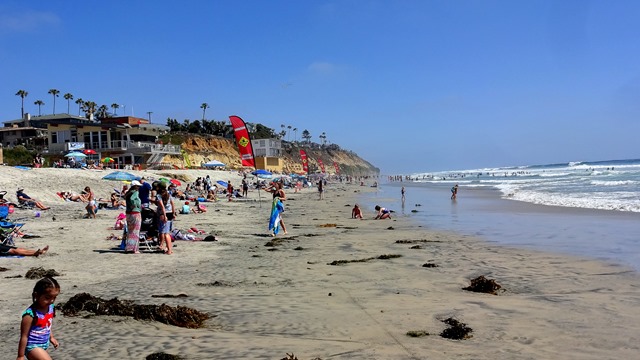 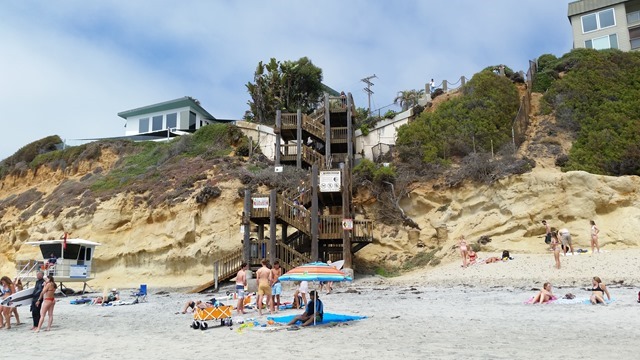 LuAnn, Terry and Jim posing for the camera. 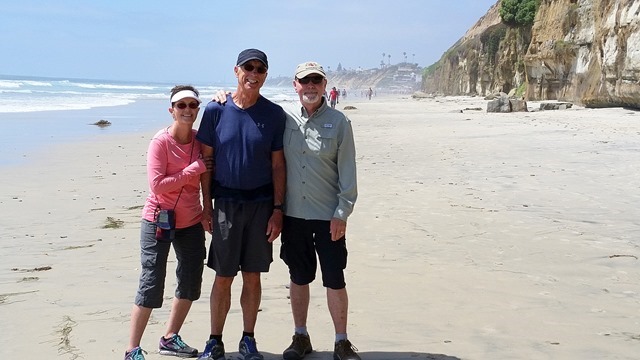 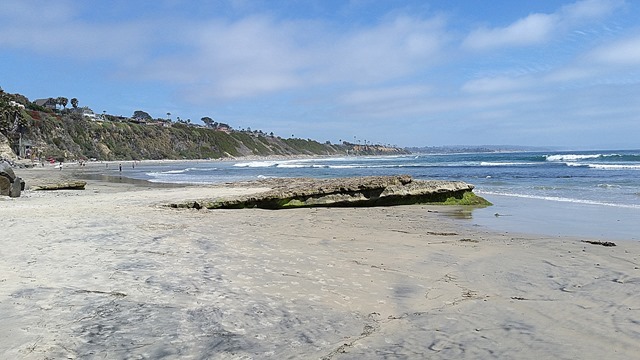 Nature’s artwork in the sand. 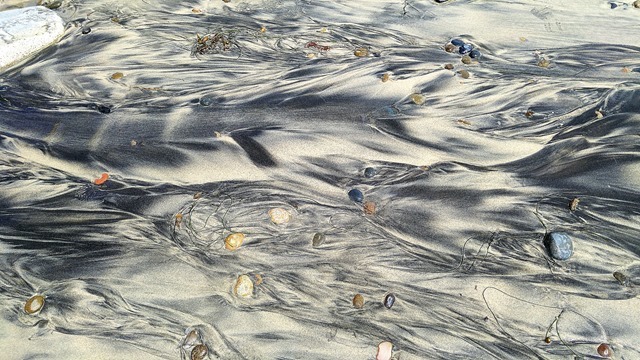 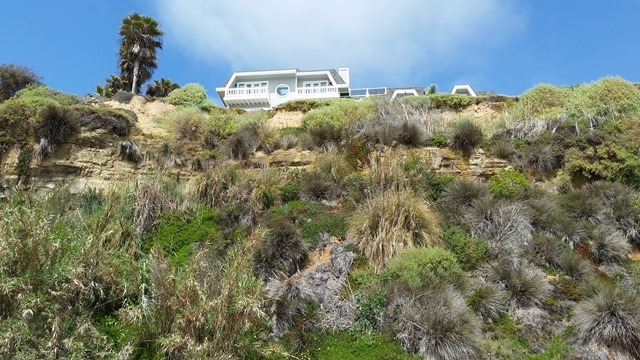 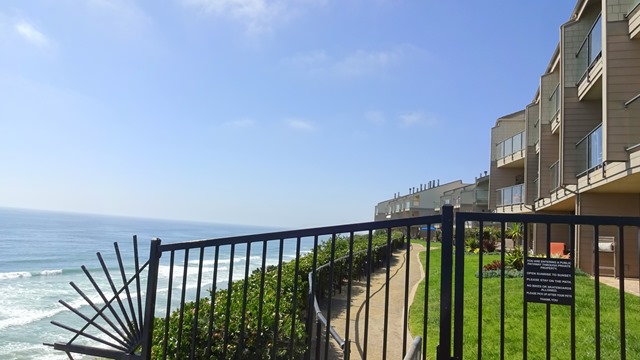 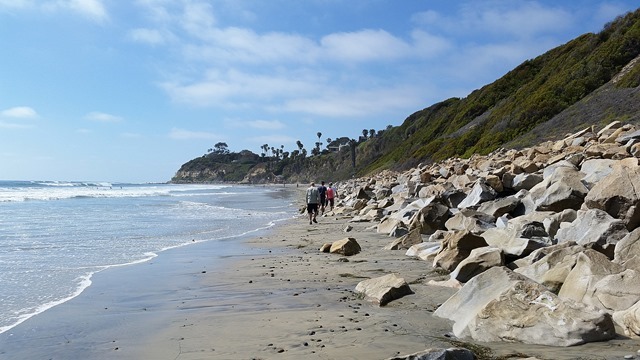 The vegan restaurant, Eve, that even meat lovers would like. 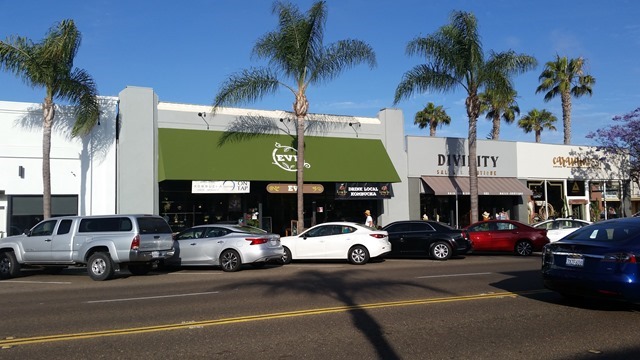 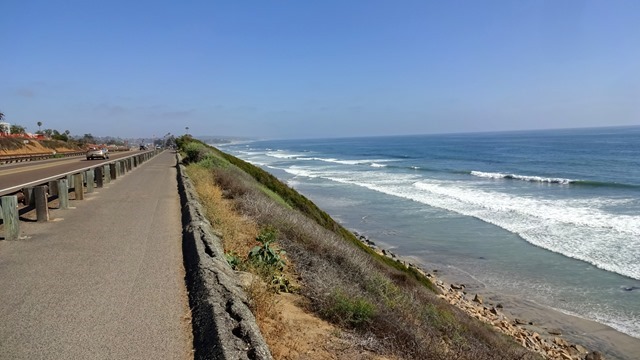 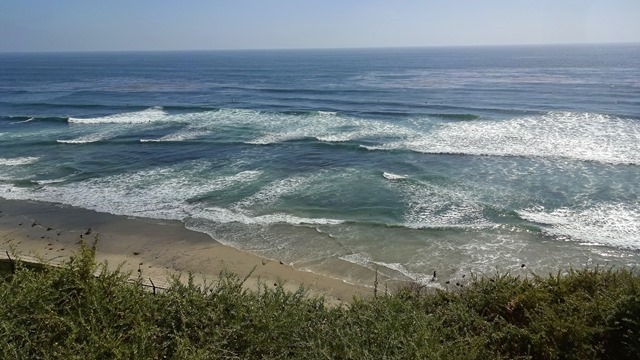 Magic Carpet Ride is the official name of this 6-foot high bronze sculpture of a surfer by Matthew Antichevich, an Encinitas artist, teacher and surfer. 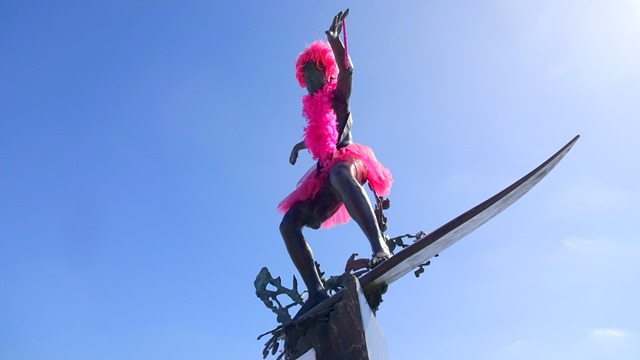 It is often unofficially dressed in costumes related to events or holidays. Looks like everybody now knows that Cheryl is 50. 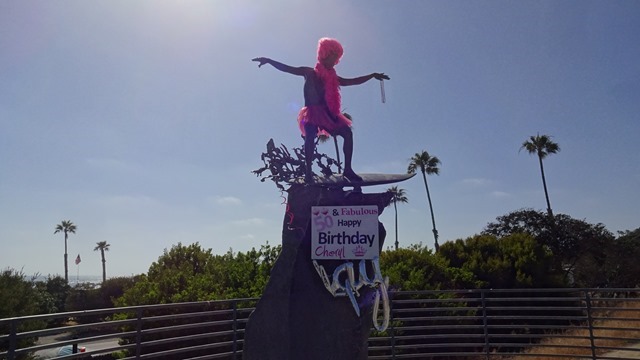 We had a fun get-away on the coast and after we got back the weather cooled off for awhile. We took advantage of one of the cooler days to drive to Warner Springs for another hike on the Pacific Crest Trail. We took the route to Eagle Rock, which we hiked once before a few years ago. We stopped to check out these plants that were spreading all over the dry ground. A few of them had what looked like tiny squash growing on the vines. 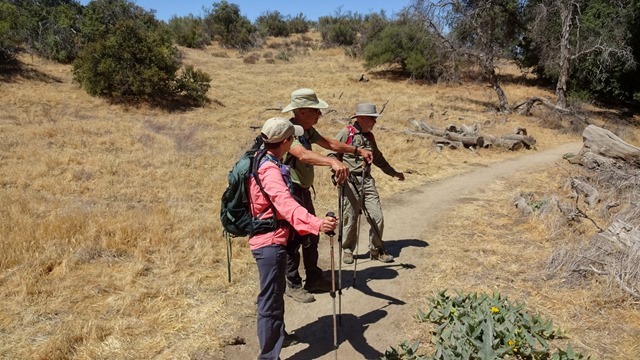 Interestingly they smell like onions, and are called Coyote Melons. 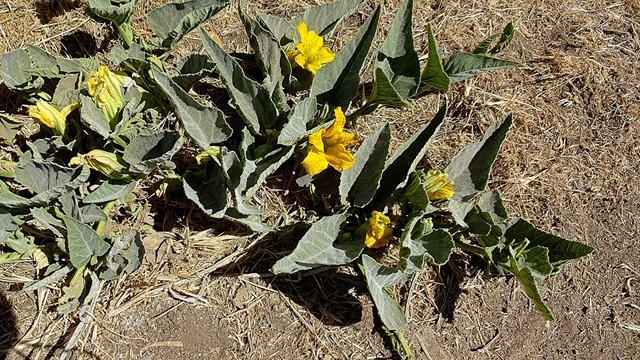 On the way to Eagle Rock, which is about 3.5 miles from the Warner Springs PCT trailhead. 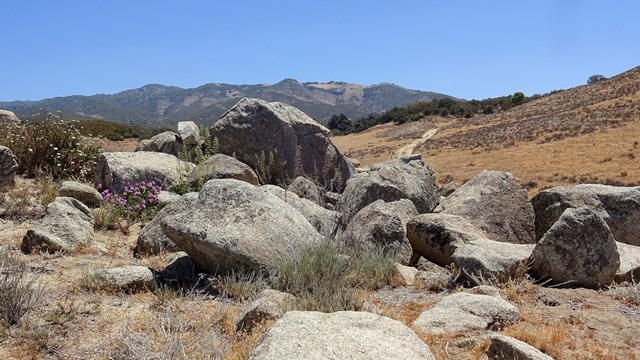 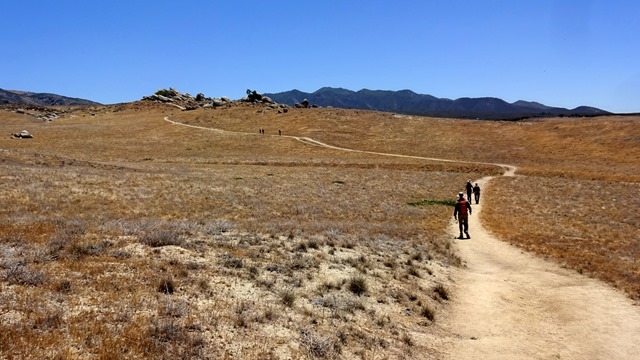 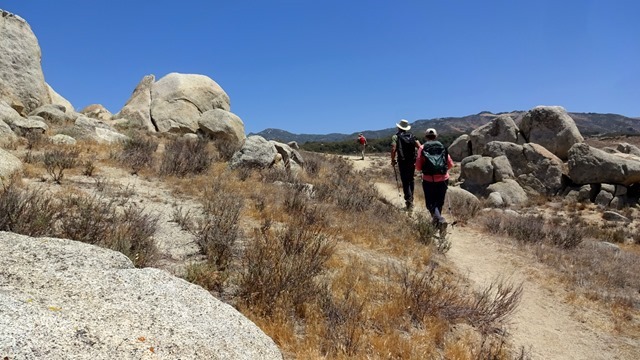 This has to be one of the most aptly named rock formations we’ve seen. No doubt it looks just like an eagle! 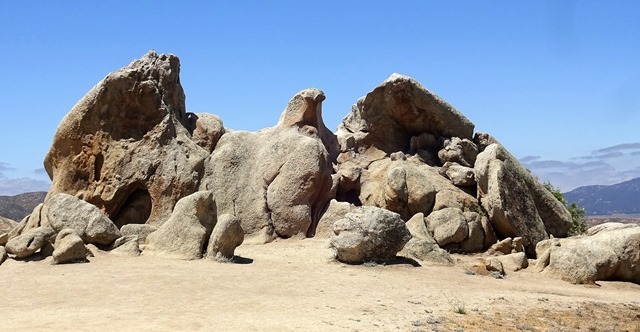 The most exciting part of this hike came when we got back to the car and it was locked behind a gate that was open when we arrived. We thought we were in the trailhead parking lot but it was really a school lot and everyone had left for the day by the time we got finished. Fortunately Jim walked over to the adjacent fire department and found a nice young firefighter who got the gate key. I suspect they’ve had to do this before! It would be nice if they put up signs. 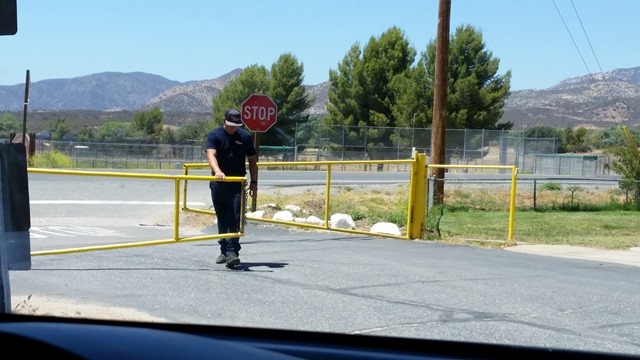 We are finally ready to get back into traveling mode on Saturday, but it sure has been nice having our own little spot to hang out for as long as we want, especially with neighbors like Terry and LuAnn.

It’s interesting to see the desert come to life in the summer, and although we’ve had a few days of upper 90s, the temperatures have been tolerable since it cools off so much here at night and the humidity is so low. 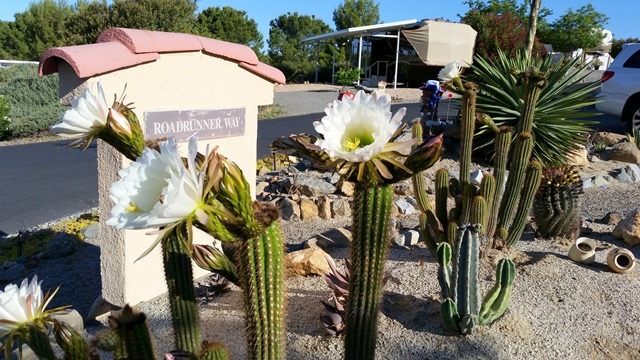 The spring mechanism on our toilet foot pedal broke a few days ago, and Jim found a fluid leak on the steering damper of the Lazy Daze. He ordered the parts but is now debating on trying to fix them himself, since he has no confidence in his ability as a do-it-yourselfer. He’s decided to wait until Thursday the 5th so hopefully a repair place will be open if he screws things up.

We’re planning to work our way up to Oregon via Hwy 395, but our plans to spend some time in the Eastern Sierras my be shortened by smoke from a fire near Mammoth Lakes. Hope this isn’t a preview of the rest of our summer travels. Our reservations in Jasper and Banff are for early September but if fires cause the Rockies to be in smoke like they were last year we will probably change our plans. Hope not, since we just found out our Lazy Daze friends from Iowa, Chuck and Carla, have decided to join us in Canada.

See you on down the road! I suspect there will be more frequent posts once we get moving again.