Because it was Friday and we had no reservations, I mentioned to Jim that we needed to get on the road early if we wanted to have any chance of getting a place to camp for the weekend near Lassen Volcanic National Park. As usual it was close to 10:30 before we actually left Bordertown with a 125 mile drive ahead of us. So much for an early start. It was a pleasant drive through pine forests most of the way, and we arrived at our chosen campground, Almanor Legacy, around 1 o’clock. 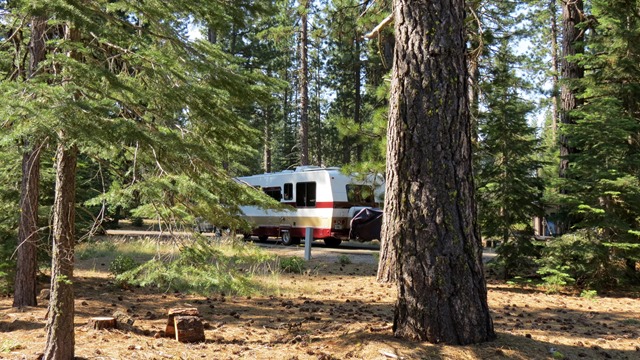 This is a first come, first served forest service campground with water and electric at all 16 sites. About half way through the loop we spotted one open site, unhooked the car and backed in. I then drove the car around to see if there were any others that looked better. Sure enough, we had gotten the only vacant site, feeling extremely lucky and making up for not winning at the casino the previous day. Sites are huge, extremely long, level, and paved, and only $15/night with the senior pass. 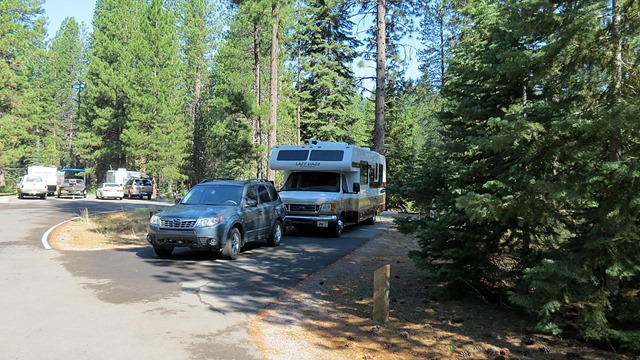 I remembered that Hans and Lisa (Metamorphosis Road) stayed in this area to visit Lassen, and so instead of doing a bunch of research I just went with their three day itinerary, since that is all the time we planned to be here. Thanks for doing our homework!

Later that afternoon we hopped on our bikes for a ride on the Lake Almanor Recreation Trail, which had a spur coming right into the campground. It’s an 11 mile paved trail through the forest and along the lake, with what felt to us like a lot of ups and downs. We didn’t quite make the entire trail, but a 14 mile ride was enough given the heat. We actually got off the trail and onto the road after turning around so we could check out the small community of Prattville, with vacation homes, resorts, RV parks and cabins on the lake.

It was hard to see the lake through the trees in most places. 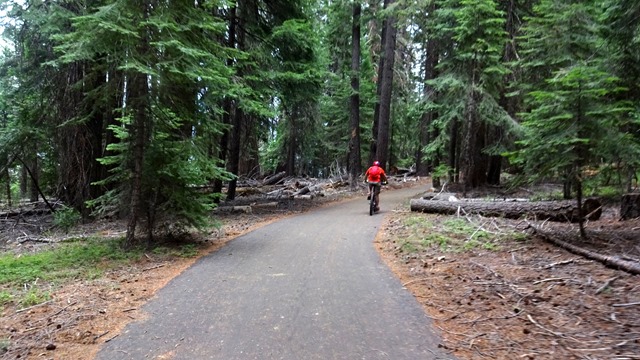 It was overcast and hazy so we could barely even see Mt. Lassen off in the distance. 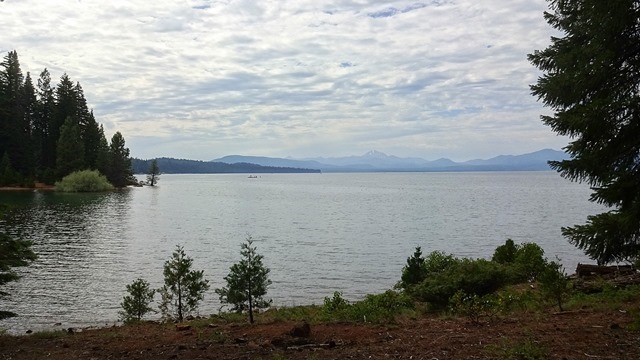 On Saturday we drove about 30 miles to the southwest entrance of Lassen Volcanic National Park. When we passed by this way in May of 2016 the road into the park was still closed due to snow but there wasn’t much snow left at this time of year.

We first stopped at the visitor center to watch the movie and learn about the park and its volcanoes and geothermal areas. All four types of volcanoes found in the world (shield, composite, cinder cone and plug dome) are found in Lassen, along with numerous hydrothermal features.

We drove about 15 miles of the 30 mile road through the park, and with stopping at various viewpoints and trails it took us the entire day. 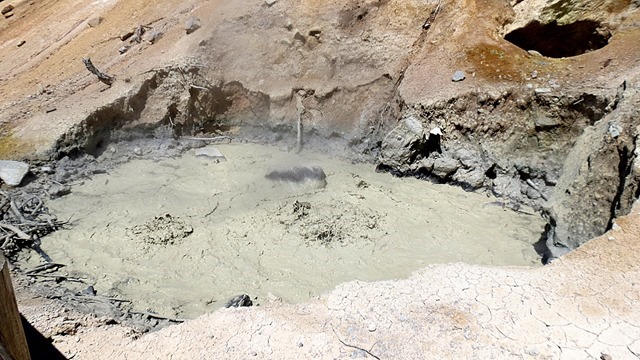 And colorful rock with numerous steam vents, both at the Sulphur Works pull-off. Photos don’t capture the steam or the lovely sulfur smell! 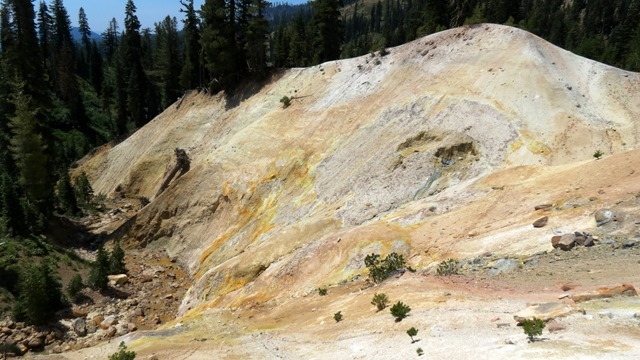 Our next destination was the trail to Cold Boiling Lake, since we liked the name. We had to stop several times along the way for photos, though. This is a beautiful park. 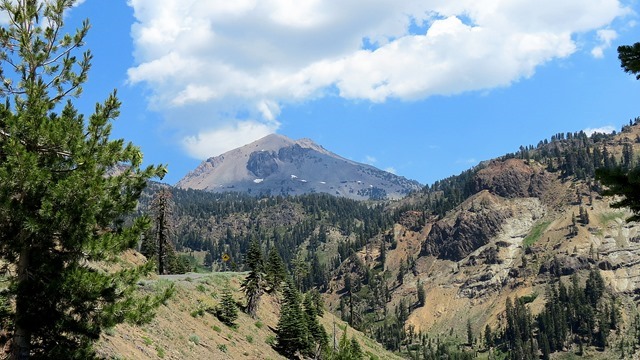 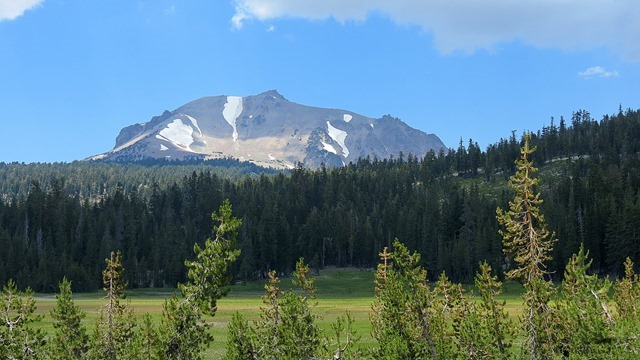 The trail to Cold Boiling Lake is less than a mile and mostly level except at the start. The lake was pretty but we couldn’t see a lot of boiling going on. 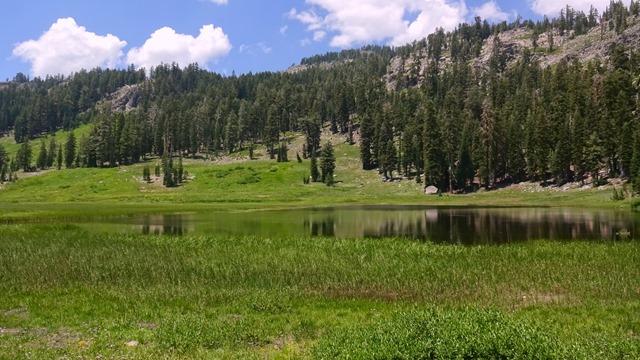 It was easier to see in the small pond adjacent to the lake, caused by naturally occurring Co2 bubbling up from below. We didn’t stick our hands in to see if it was really cold. 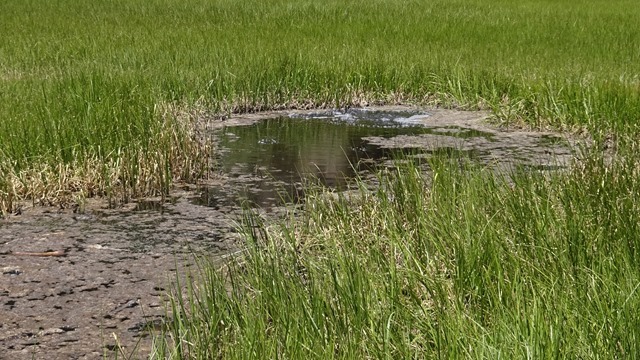 If you continue along the same trail it eventually goes to the largest geothermal area in the park, Bumpass Hell. Sadly the trail was closed for renovation, but the history of the name is interesting. Kendall Vanhook Bumpass was a miner working in the Lassen area in the 1860s who discovered this area and placed a mining claim. On one of this trips his leg busted through the crust over a boiling mudpot, he was severely burned, and ended up having the leg amputated. Definitely Hell for him.

For our last hike of the day we decided to hike to King’s Creek Falls. It’s 1.5 miles to the overlook, with a steep descent as you get close to the falls. 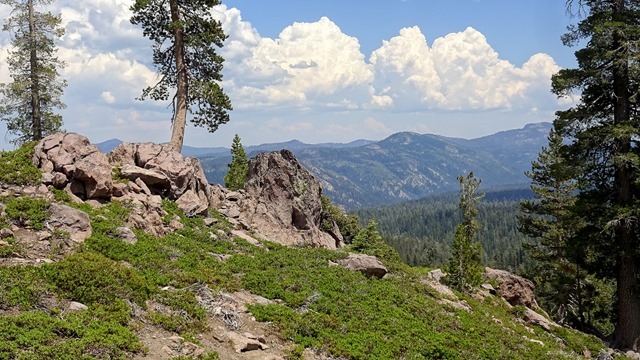 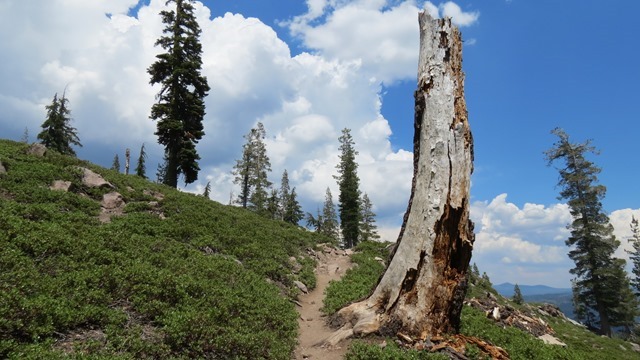 With its 40’ drop, the waterfall is quite impressive. 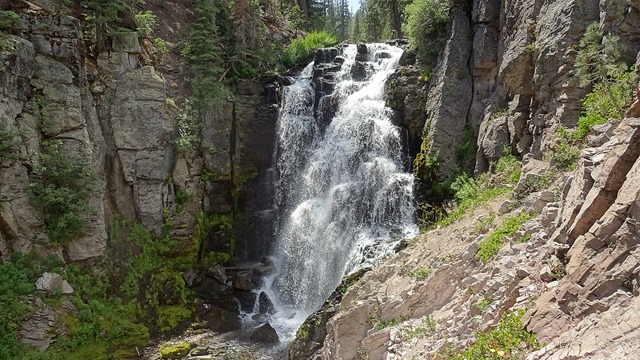 Signs route you down to the falls on a more gradual route but there is an alternate trail going back up that consists of many, many steep and narrow steps. It was much more scenic as it followed the rushing creek. It is also shorter so we opted for it on the way back. 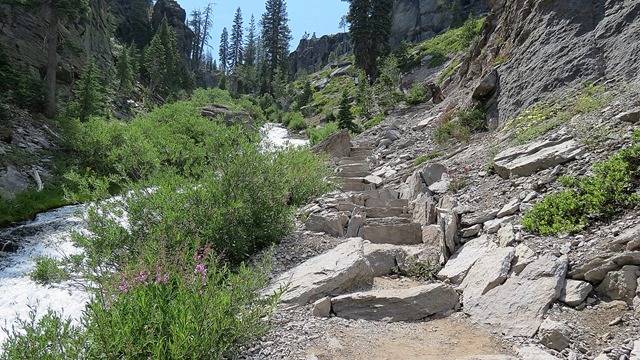 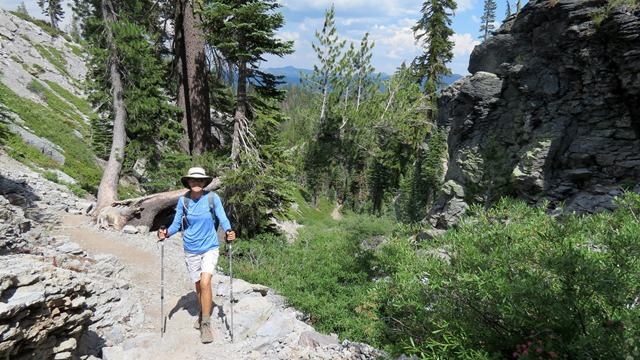 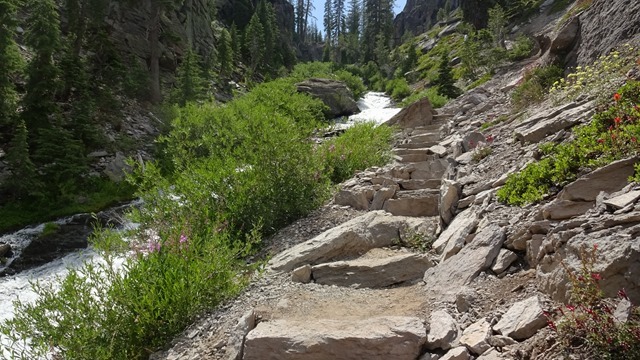 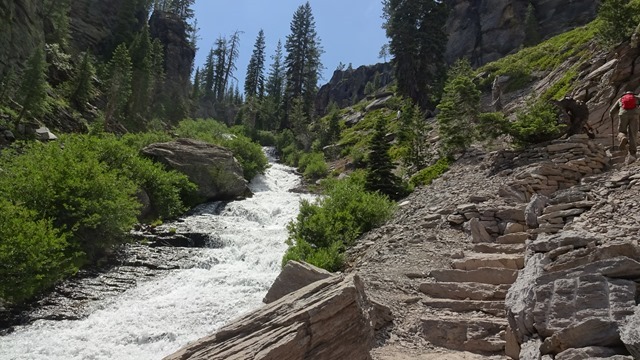 On our last day in the park we drove to Chester and then north 17 miles for a hike on the Devil’s Kitchen trail. From the first parking lot it was about 5.5 miles round trip, with 600’ of climbing, which was mostly gradual.

The trail passes through meadows and then meanders through the forest to the open loop around the Devil’s Kitchen hydrothermal area. It was in the low 80s so we were happy for the shady parts. 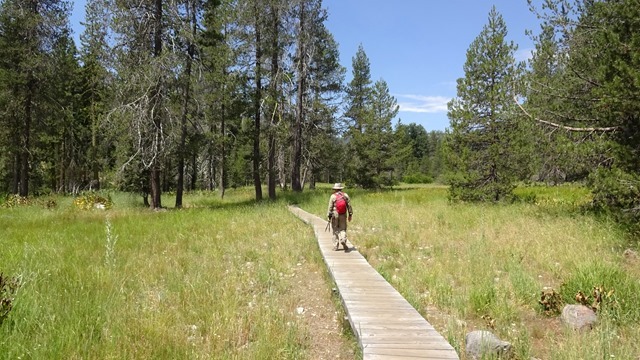 The initial part of the trail follows the Pacific Crest Trail, and passes by Drakesbad Ranch, where hikers can stop for a meal and a shower. This is the midway point of the PCT. 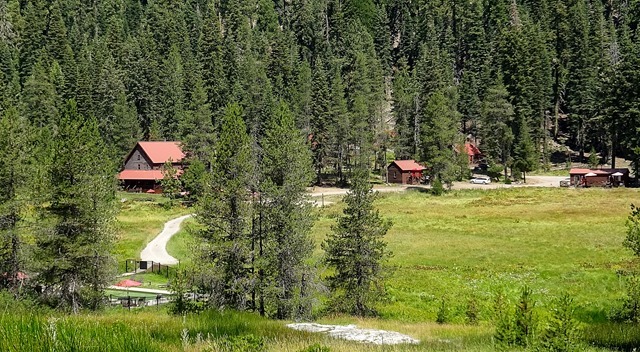 We came upon a guided horseback ride heading back to the ranch. Neither the riders nor the guide looked like they were enjoying themselves. 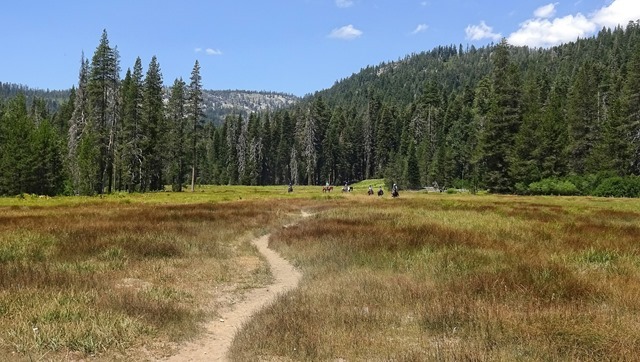 The Devil’s Kitchen is a short loop through steam vents, mudpots, and boiling pools, with the pungent scent of sulfur lingering in the air. 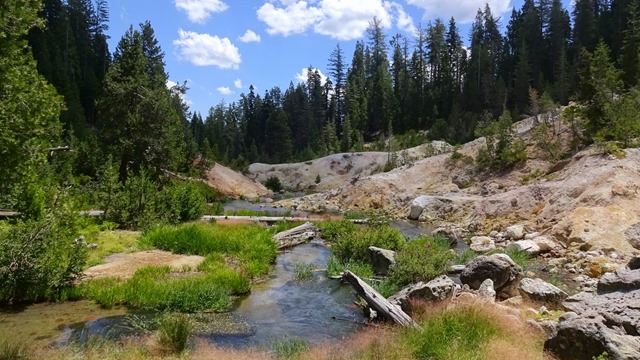 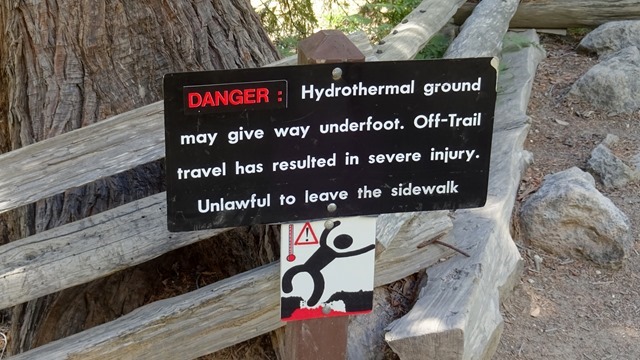 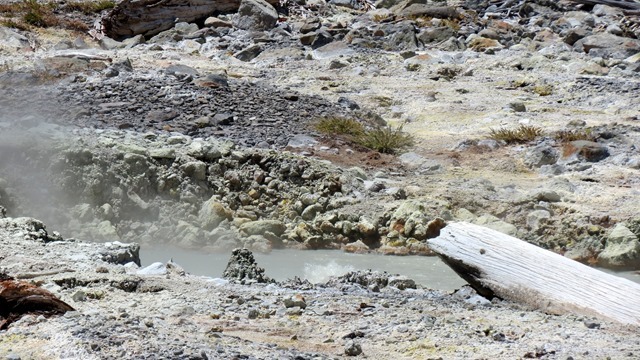 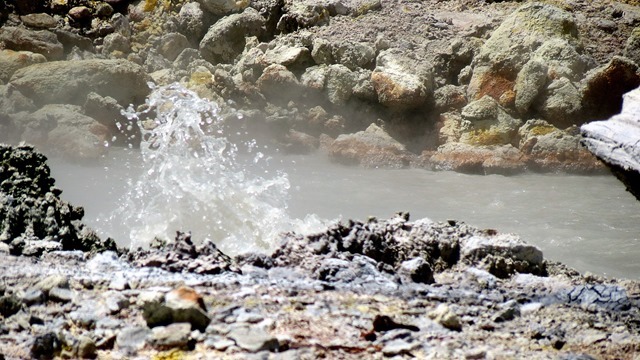 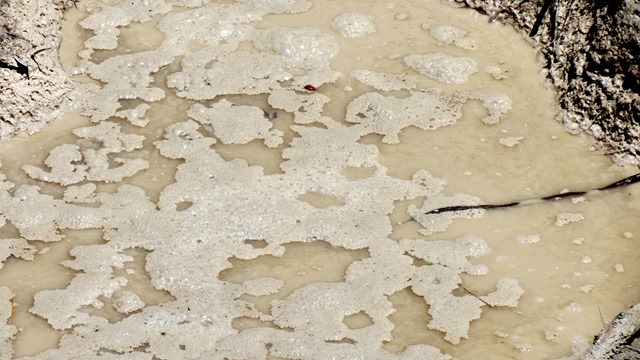 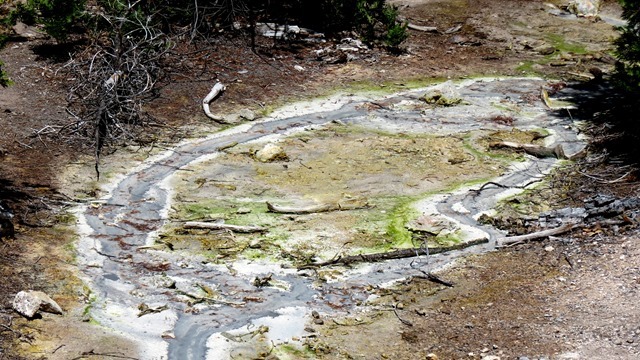 I found this area fascinating but Jim was underwhelmed. We did hear that it would be more impressive earlier in the season when there was more water in the streams and pools. Many of the mudpots we saw were nearly dry.

The best part of the hike was on the way back when a group of people coming towards us said a bear just crossed the trail and went into the woods. They lost sight of it but I kept looking as we walked on and spotted it. By the time Jim got the camera focused it was heading off up a hill and out of sight. No telling how many of them were out there that we missed. 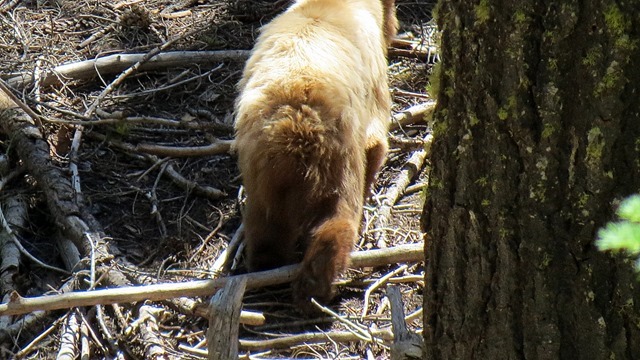 Lightly visited Lassen Volcanic National Park is definitely worth a trip and we’re glad we came. In hindsight, Jim said he wished we had done the hike up Lassen Peak instead of the shorter hikes we took. It’s only 2.5 miles with 2,000’ of climbing, but it is also exposed with no shade and would have required a much earlier start given the heat. Maybe next time!

We would also like to come back and visit the northern sections of the park that we missed. The aerial views of the Cinder Cone trail that we saw in the park film looked intriguing.

Now on our way to Eugene…