We entered California Monday, land of bad roads and high gas prices. The state also confiscated a bag of clementines from Debbie when we passed through the Agriculture Inspection Station. That’s what she gets for being so honest! Actually we were first, and the woman just asked us where we were coming from. Jim said Lake Havasu, and she told us to have a nice day. When Debbie pulled up, she was asked the same thing, but also if she had any citrus or other produce. She confessed to the clementines, and had to show them to the inspector. Since they were from Chile (via Wal-Mart), they could not enter California. Debbie wasn’t too happy, so the woman told her she could pull over and sit in the lot and eat them if she wanted to before entering CA. What a fine welcome.

We are in Cottonwood Campground, just 8 miles north of I-10 in Joshua Tree National Park, at 3,000’ elevation, one of the lower areas of the park. This is our third visit to Joshua Tree, a lovely desert park. The campground is nice except  the only sites that will fit a bigger RV are just pull-offs along the road. We always get nervous when other rigs pass by so close, but luckily the park is not very crowded so there is little traffic. It is $15 a night, no hookups, but there is water and a dump. We have absolutely no cell or internet, but there are numerous TV stations, although all were in Spanish. Something else we forgot about California.

We did a couple hikes right from the campground, so we didn’t have to go out exploring the park by car. The southern part of the park has no Joshua Trees, so that may disappoint some people, but we’ve seen them before, and it is still pretty country even without them. We walked to Mastedon Peak, a 1.2 mile hike to a nice view of the Salton Sea and an old mine. It was late when we started, and with the time change, it was dark by the time we got back at 5:30. Also it was getting very cold, much colder than the predicted temps. In fact it was 32 when I got up this morning, and had we known it would be in the 30’s we would have stayed somewhere else with hookups, but we survived. Here are a few pics of the trail. 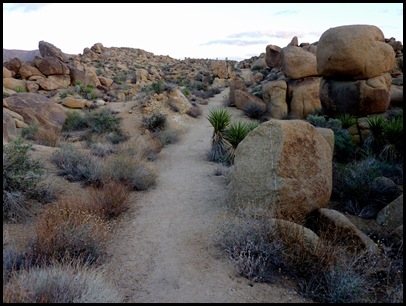 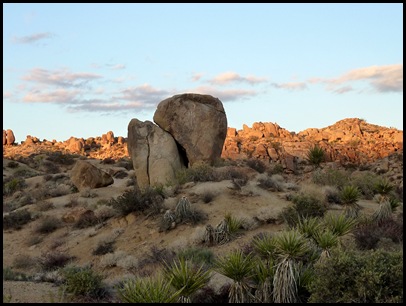 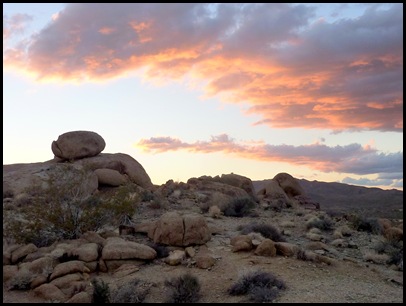 The Salton Sea off to the right. 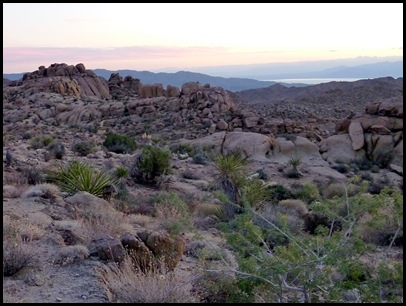 It was a lovely sunset and fortunately we didn’t get eaten by desert creatures after it got dark. 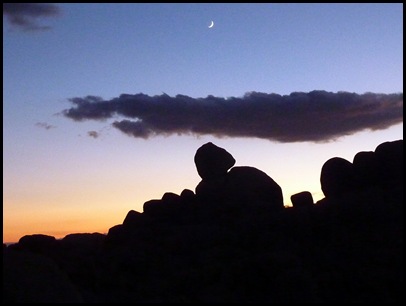 Yesterday we hiked to Lost Palms Oasis, a 4 mile trail to a fan palm oasis. It was a gradual climb most of the way, but there were more ups and downs as we approached the oasis. We didn’t actually make it all the way to the oasis, just to the sign and the view of it, since again it was getting late and this time we wanted to get back before dark.

The trail starts at Cottonwood Oasis, which you can drive to. 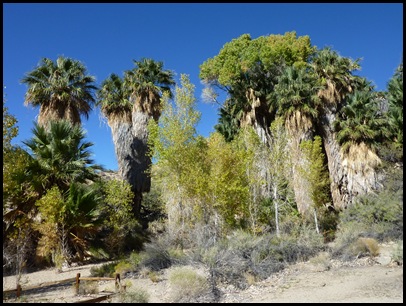 More rocks we saw along the way. 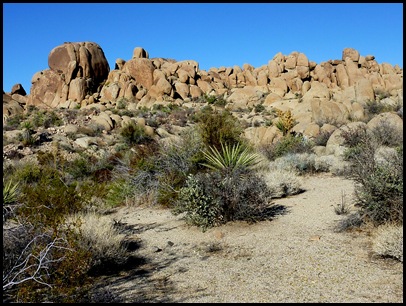 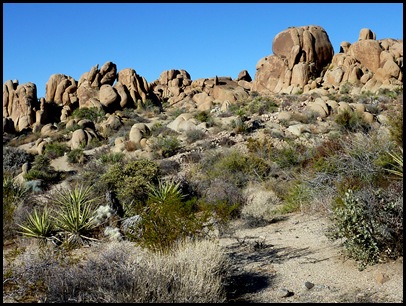 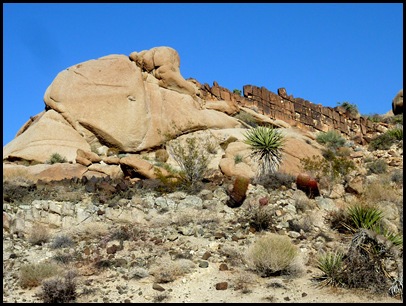 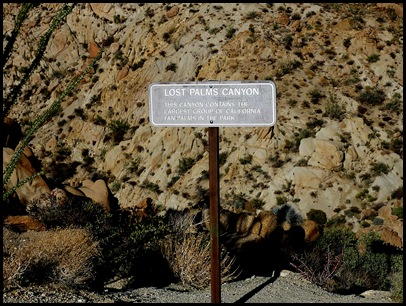 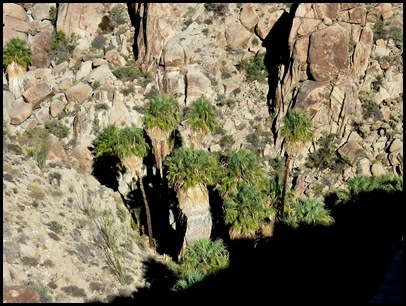 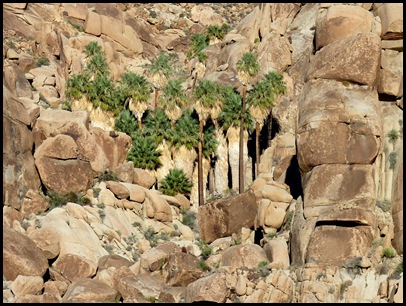 There must be water down there somewhere, but it was another 2/10 of a mile down into the canyon and we just couldn’t muster the energy to go find it. Jim is convinced I’m trying to kill him with these hikes, but so far it hasn’t worked.

Today we are moving on to the Salton Sea area where it is below sea level, and we hope much warmer.