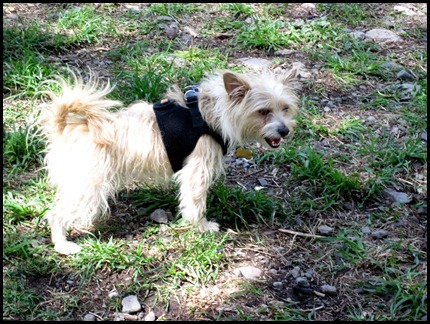 And Joey, a neighbor’s sweet dog that visits us daily. Jim has really taken a liking to her. 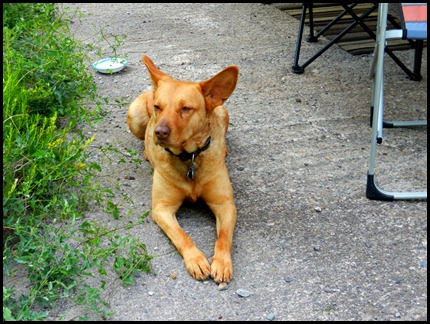 And now for the not so sweet dog story. Yesterday we wanted to give our legs and knees a little break from any serious hiking, so we took a walk to the post office, through downtown Ouray, and on to the Uncompahgre River Walk, a completely flat 2 mile loop trail north of town. It was a pleasant stroll along the river with the benefit of fantastic scenery and not having to be careful of falling off a mountain with every step.

About a half mile from the end there were some small houses with backyards adjacent to the trail. We stopped to watch a couple of cats on a carport, then as we continued on in front of the same house a medium size white and brown dog came down the steps onto the trail. I think I said something like “cute dog”, and we both thought it was coming to get petted. As it approached Jim he leaned over a bit to do just that. It was at this point he realized that although the dog had not barked or growled, it was baring it’s teeth in a snarl and he knew he was in trouble.

My attention was elsewhere at that point, but I heard an expletive from Jim, then a whack sound (which was Jim hitting the dog on the head) as it bit him on the knee. The dog then ran off and the owner came out. She was concerned and apologetic but said tourists walking the trail come up the steps into their yard frequently (hard to believe) and the dog is very protective. Of course we weren’t in her yard but on a public trail. She denied that the dog had ever bitten anyone before, said it had recently gotten it’s rabies vaccine, gave us her contact information and a wet paper towel for Jim to clean off the blood which was now running down his leg. 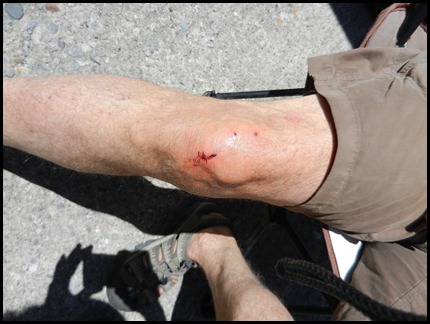 We came home and I researched dog bite treatment on the internet. Jim washed it well with antibacterial soap and rinsed for 5 minutes, applied antibiotic ointment and bandages. He then called the police department to find out where to report the incident and they told him he had to come down in person, which he did. The officer then went to the woman’s house and verified that the dog’s rabies vaccination was current. He told her she had to keep the dog restrained and if another incident was reported “you know what that means”.

Let’s hope all is well and this won’t happen to someone else. And also hope that Jim doesn’t develop an infection, since he would not go to the doctor to get it checked. You know how men are!

The day ended better, though, with no thunderstorms for a change. so we soaked up the view and relaxed. Perhaps we would have been better off going on another death defying hike… 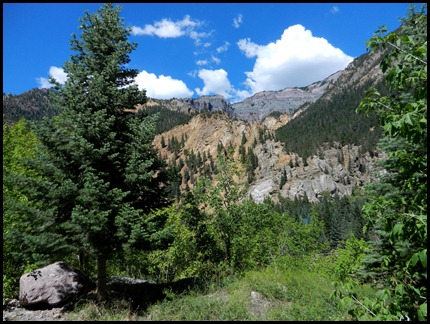