A couple days after we arrived in Poncha Springs, Jim found the beginnings of a rodent nest under the hood of the car. We weren’t sure if they had started building it while we were at Curecanti NRA near Gunnison, or if the culprits were working on it here on our mesa.

Today we were getting ready to drive the Lazy Daze into Salida to dump our tanks. I was outside making sure we didn’t leave anything underneath that we might run over, when I saw what looked like a piece of insulation material on the ground under the front of the rig. Jim opened the hood, and this is what he found. 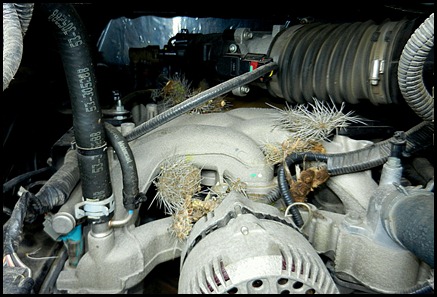 Lots of little prickly pear cactus pieces, bones, rodent droppings and insulation. It was everywhere! The majority was on the engine block that was very difficult to reach. Jim cleaned it out as best he could, with the help of some heavy gloves, Carla’s extra long tongs, and our hand vac. We also stopped at a car wash in town to use their super vacuum.  At least it appears they aren’t eating any wiring.

Just a small portion of what we got out. 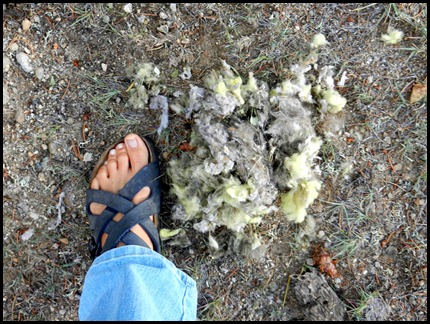 Jim was going to prop the hood open to spray some peppermint oil, which seemed to help keep the mice away when we were in Missouri last summer, and when he opened the hood of the car he was greeted by a big rat sitting in there. It ran off and we sprayed like crazy. About an hour later we came back from a walk and he opened the car hood again. There it was again, and this time I got to see the hamster-sized rodent just looking at us! Guess the Colorado rats like peppermint.

We are leaving Monday so we will keep a close watch and make sure they don’t build another castle.

Neither Debbie nor Chuck and Carla had any nests under their hoods, but Carla did find peanut shells in their Jeep, and to their knowledge nobody has ever eaten peanuts inside the Jeep. Maybe that’s where they’re having happy hour!