It’s been less than a few weeks since we left Ouray, and you might think we would have remembered a couple things we learned about the Colorado mountains from hiking with Mark and Bobbie. But, we are slow learners. Specifically I’m talking about starting early to avoid the afternoon thunderstorms, and bringing rain gear just in case the rains come early.

Yesterday we hiked a couple miles of the Colorado trail, beginning our hike in the late morning across from Angel of Shavano campground. We started at 9200’ and climbed, as usual. It was partly cloudy, but soon some dark gray clouds appeared to be coming our way. I commented that I had forgotten to put our rain jackets back in our packs, and hoped it wouldn’t rain. Chuck and Carla had forgotten theirs, also. A short time later as we were heading back down the trail the rain started. It gets a little cold when it rains here, but it didn’t last too long and there was no thunder and lightning. I again mentioned that we needed to remember to bring the rain gear on our next hike.

A very impressive hidden waterfall the jovial but lonely host at the campground told us about. 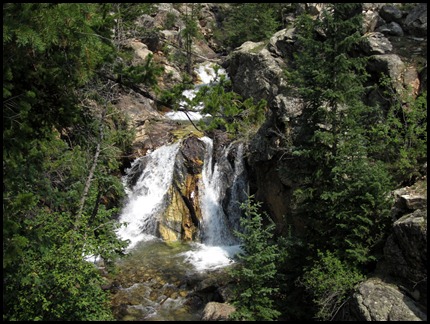 Today we decided to drive up near Monarch Pass to hike the Waterdog Lakes Trail. 1.7 miles to an alpine lake, starting at over 10,000’ with more than 1000’ of climbing. We had a little trouble finding the trail head, and it was noon before we started our hike, mistake number one. It was a very strenuous trail that felt like it went on forever, but we were looking forward to lunch by a lovely mountain lake. As we were almost there, the sky turned dark and it was at that point I remembered we still hadn’t put our rain jackets back. Mistake number two. Not that it made us feel any better, but Chuck and Carla didn’t bring theirs, either.

There was some pretty scenery on the way up, very lush and green. 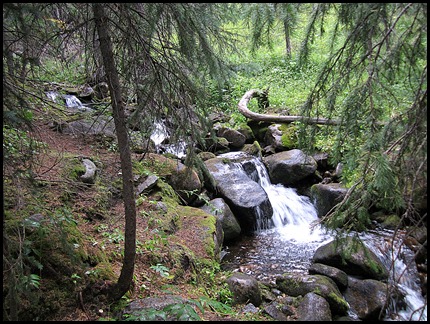 The last stretch of uphill was awfully rough and steep. 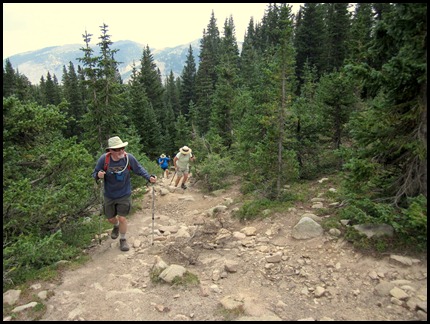 I made it to the lake first and assured the gang they were almost there. The sign looked about as tired as we felt. 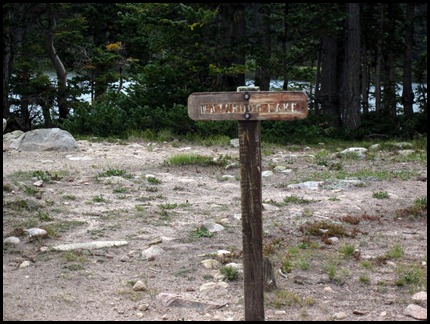 With the dark skies the lake wasn’t quite what we’d hoped for, so we ate a quick snack before the raindrops began to fall. 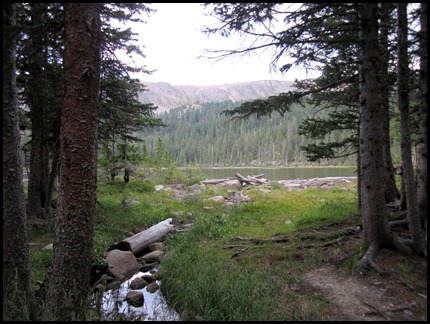 We thought it was going to be a quick shower, so Chuck and Carla and I decided to walk around the lake to check it out, while cold-natured Jim decided to make a bee line back to the car. It was then that the hail started. 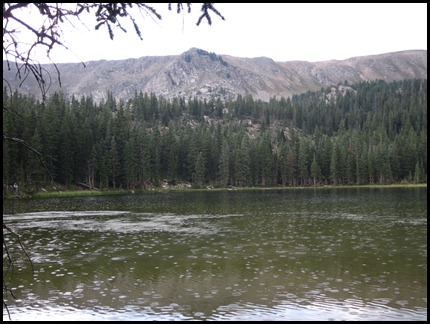 It was cold but at least the hail kept us from getting wet. By the time we got around the lake it had stopped and the sun was inching it’s way out. 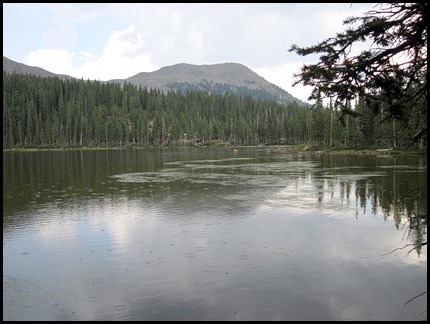 As we made our way back down the trail, it looked more and more wet. I figured Jim had made a mistake by not staying with us, but who knew. Then the thunder and lightning really started up, sounding way too close for comfort and causing me to sprint down the trail as fast as I could. I never did get rained on again. But when I arrived at the car, nice and dry, I found Jim cold and wet and not very happy. He said he experienced everything but locusts on his descent. Maybe we should get an earlier start and bring our rain jackets next time….

Last evening on our way to eat at Amica’s Pizza and Microbrewery(excellent food and beer, by the way), we stopped by the WIN gathering taking place on the other side of the ridge from us. Debbie had emailed Diana, from Life on the Open Road, and she invited us to stop by. She is every bit as nice as she seems in her blog, and it was a pleasure to meet her and some of the WINers. They seem like a fun group (lots of hikers), and if Jim ever makes good on his threat to leave me and get his own RV, I know who I could travel with!