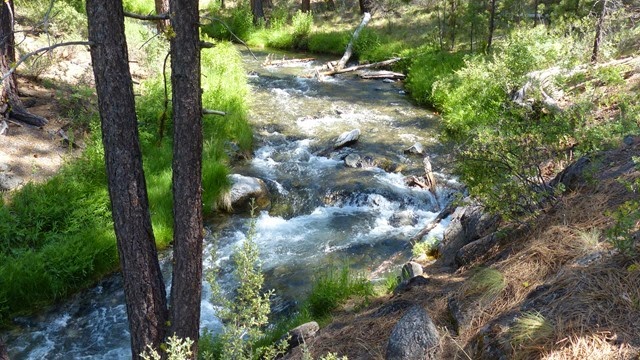 After a few days of cooler weather with intermittent, much needed rain, we quit thinking about making life changes and got on with our usual hiking and biking routine. One day we went south along the road to Newberry Volcanic National Monument and parked at the Ogden Group Camp for a hike on the Peter Skene Ogden trail.

It’s a very pleasant hike along Paulina Creek with a gradual incline. Not too far along we saw some people coming towards us with goats in tow. We stopped and chatted and it turned out they were having a group camp-out with pack goats, part of the North American Packgoat Association or NAPgA. There is an organization for everything!

These were in training and we were amazed at how well behaved they were. 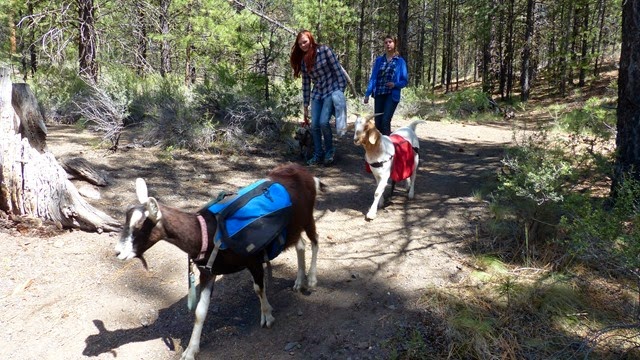 After 2.7 miles we turned around at Little Paulina Creek Falls at the McKay Crossing Campground. You can actually continue on the trail all the way to Paulina Lake, making it an 18 mile round trip hike.

When we arrived at the falls this family was enjoying the water. 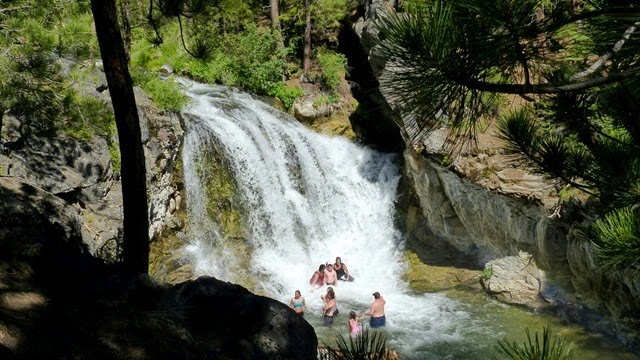 By the time we walked through the campground and crossed the bridge to the other side we had it all to ourselves. 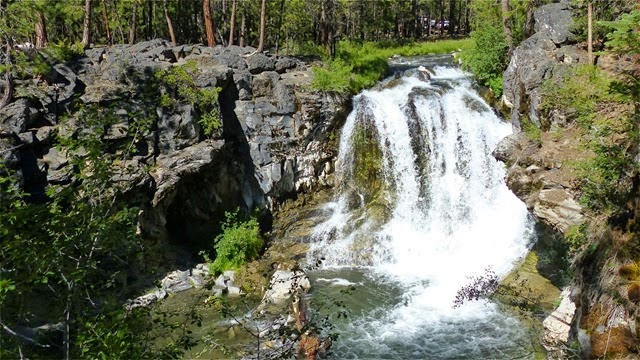 When we got back to the car, a couple with three goats were taking a walk by the creek so we stopped to visit. They are quite friendly, curious, and oh so cute. 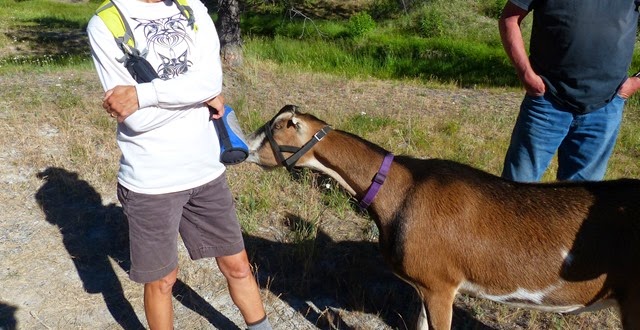 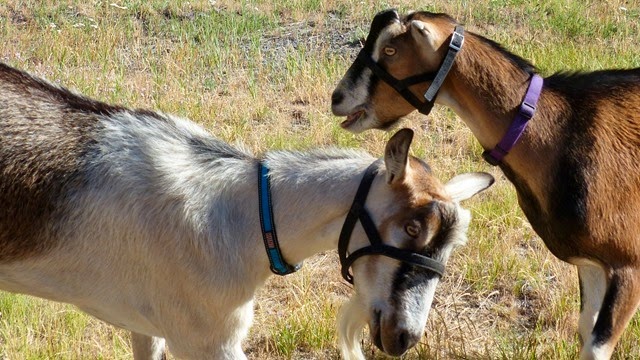 The next day we rode our bikes to the Deschutes River trail, where it follows a ridge overlooking the river. Met a couple who live nearby and we had a nice talk about the best places to live. They also have a house in Palm Desert to spend the winters, giving them the best of both worlds. 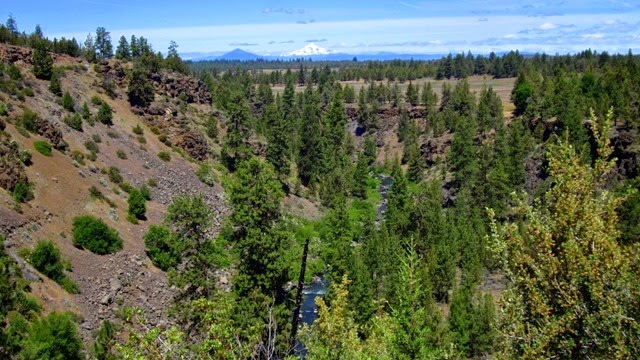 Yesterday we took a drive back to Camp Sherman to do another hike with Chris. After a few wrong turns and a rough forest service road, we finally found the Jack Lake trailhead to the Canyon Creek Meadows trail.

A 2003 fire burned the area around Jack Lake, giving it a surreal quality. 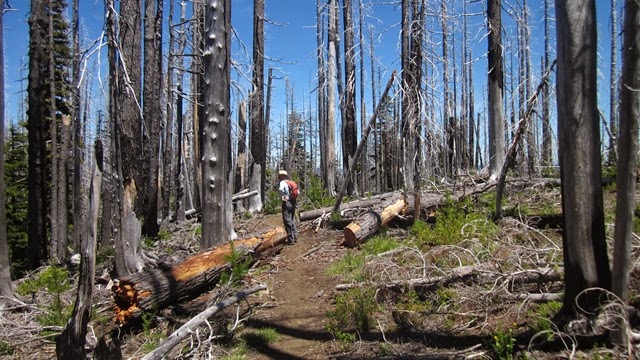 Bear grass (Xerophyllum tenax) was blooming all through the lower burned area. 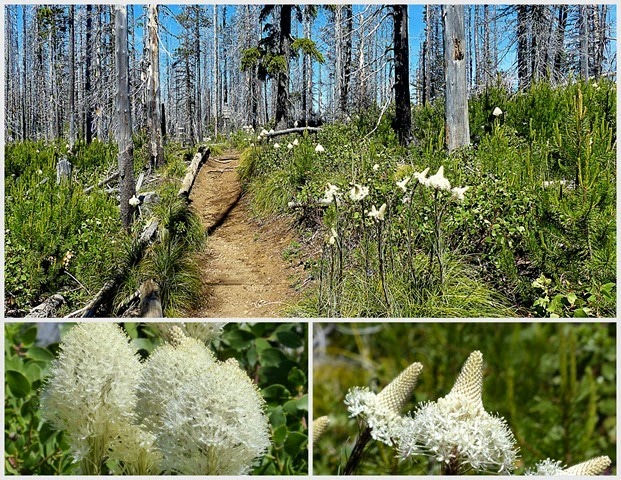 The trail makes a 5 mile loop through the Mt. Jefferson Wilderness. The forest service asks that you hike the trail clockwise to minimize meeting other people and having a more wilderness type experience. After a couple miles of uphill we came to a small lake and just past it a meadow with a great view of Three Fingered Jack. 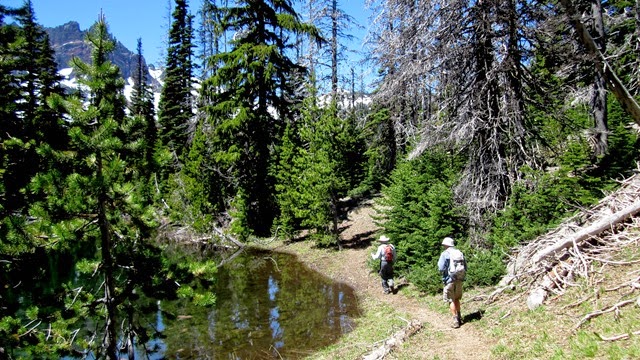 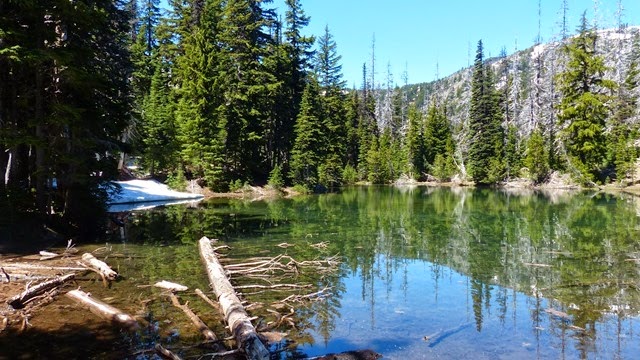 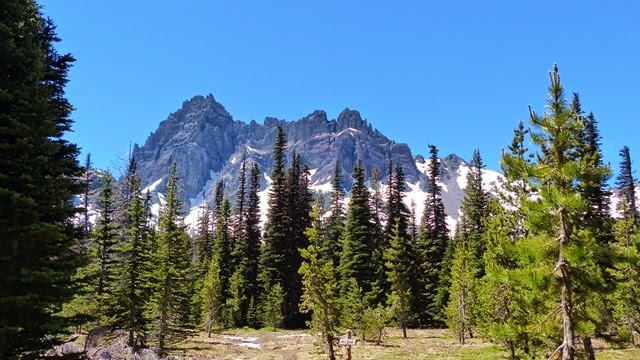 I always wonder how things get their names, and found this:

HISTORICAL-- the rather unique and colorful name of this Oregon peak derives from the outlaw Three Fingered Jack (real name was Tres Dedos). His life ended rather abruptly in 1853 when California Rangers killed both he and notorious Hispanic bandit Joaquin Muiretta in a raid on an outlaw camp in the Tulare Valley of California (Southern Sierras, near Sequia Tree National Monument)... The Rangers wanted to prove things to the Public, and so it was that Jack's famed hand was amputated, and joined the decapitated head of Murrieta in a big vat of whiskey that was transported to Stockton and other places in a gruesome public display.

This is a popular hike for wildflower viewing but it was a little too early in the season. We did see some at the lower elevations, and there were lots getting ready to bloom, so it should be beautiful in another few weeks. We wanted to get closer to the mountains so we turned off on a side trail which is another 1.5 miles to an upper meadow and viewpoint. I read that the trails above 5,700’ were still covered in snow, and they were right. There was no more trail in sight and the snow was much deeper than it looks in this photo so we headed back. 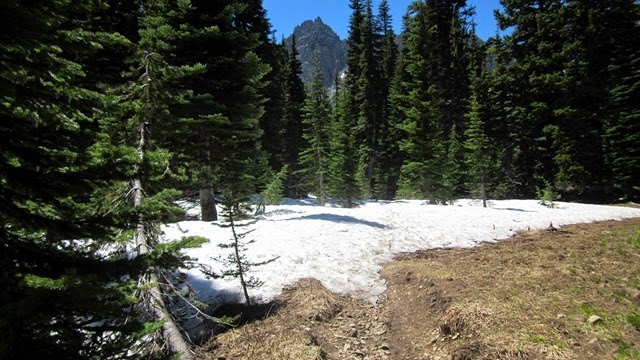 Nice spot to stop for lunch. 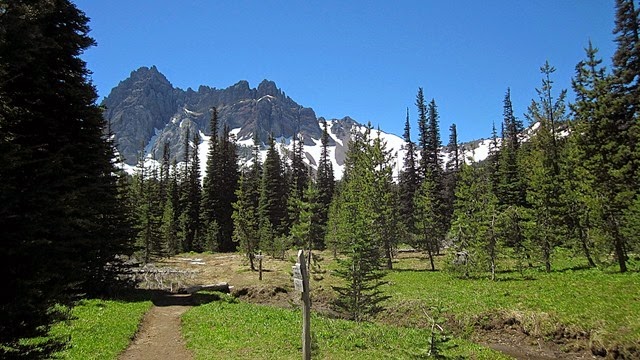 The second half of the loop followed beautiful Jack Creek. What a nice trail! 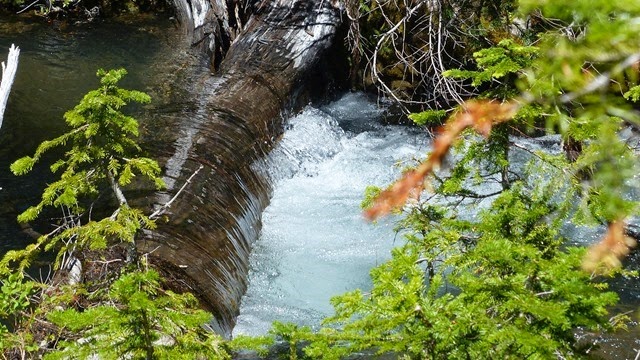 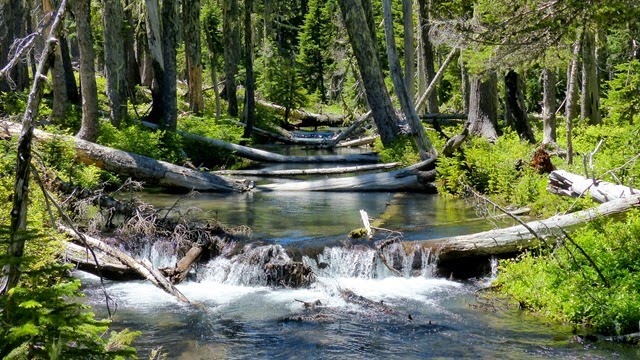 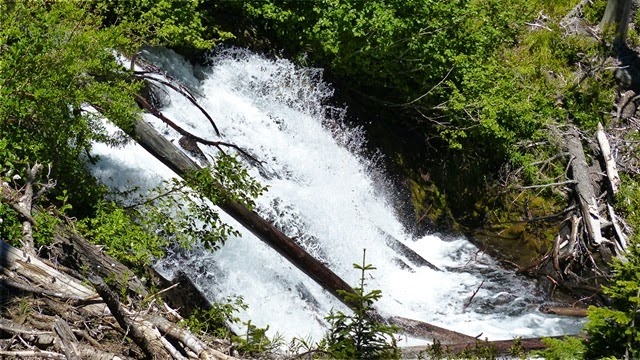 On the way home we stopped at Bend/Sisters RV Park to say goodbye to Gary and Leslie, who are leaving today for Crater Lake. We’ve enjoyed a couple brewery nights with them and hope to get together in Arizona next winter. Blogging has connected us with the nicest people, an unexpected benefit.

As to our future plans, we will hang around Bend at least until after the upcoming holiday weekend, possibly a bit longer, and then move on to points north. Someone else made an offer on the Foretravel we were considering, and we ruled out the condo early on, so it’s status quo for us. There is another similar Foretravel for sale in Portland we may go look at, but it’s so much easier just to do nothing.